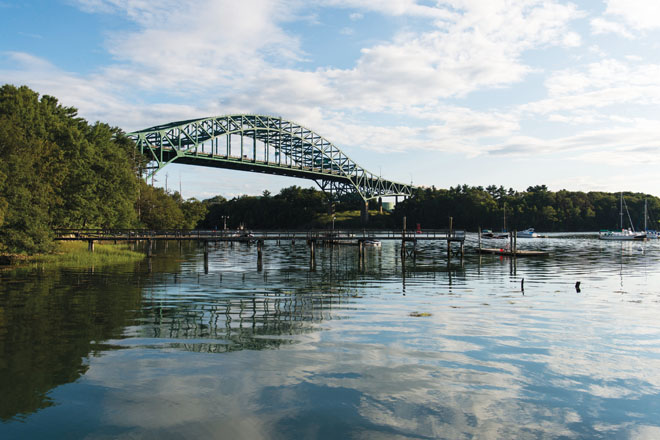 The Piscataqua River cuts through the land along the border of New Hampshire and Maine, and empties into the Atlantic between Kittery and Portsmouth. In the past, to enter into Maine from New Hampshire, travelers traversed the river via the Sarah Mildred Long Bridge or Memorial Bridge. In the 1960s, with more cars full of people heading for Vacationland, the bordering states’ governments decided to build the six-lane, 135-foot structure to permit quicker travel to northern New England.

The enormous structure took four years to build and one nearby journalist was intrigued by the process. Elaine Peverly wrote Bridge Over the Piscataqua, which she described as “A condensed pictorial account through the eyes of one who lived in its shadow and who developed a love affair with ‘her’ bridge.” While the new highway upset many who were wary of the changes it heralded, Peverly was fascinated. Through black and white photographs and detailed construction updates, she documented the entire process from the moving of homes to the captivated children watching the bulldozers and large trucks to the men who died working on the bridge. In November 1972 the bridge was opened. In 1974 her book was published.

Now the river bridge’s green steel arch has become part of the landscape in southern Maine and a landmark for travelers who are visiting or coming home to Maine. Passersby may hardly think of the four years it took to build the massive structure. Still, in the middle of the bridge, near the Vacationland border, car windows frame views of Portsmouth Harbor and Kittery from high above, and there is still fascination.