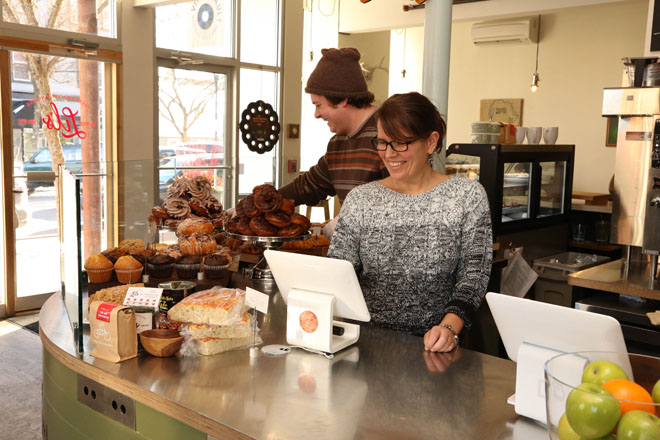 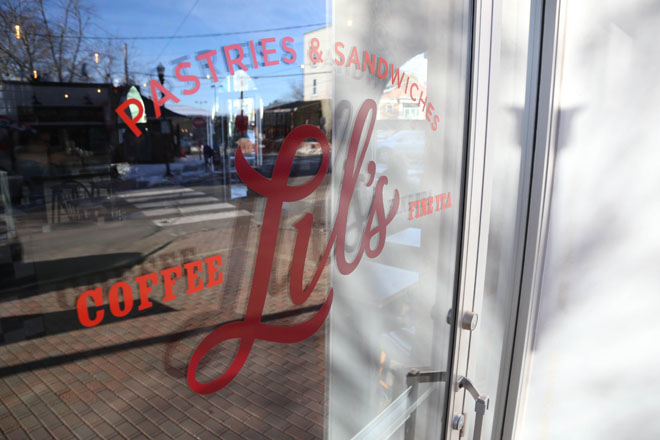 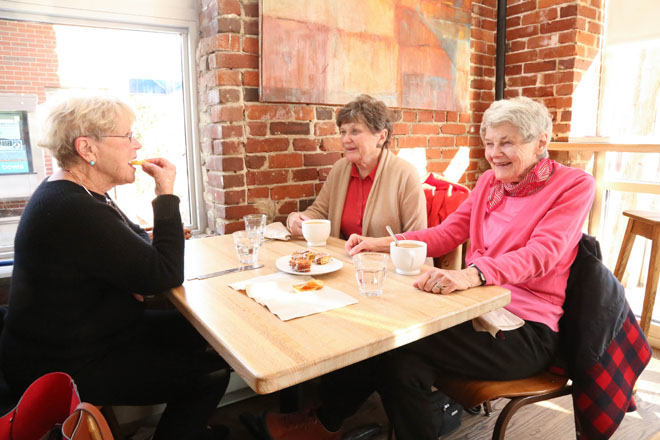 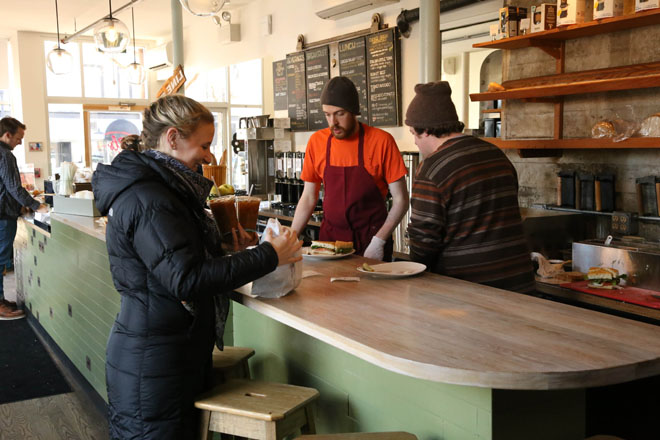 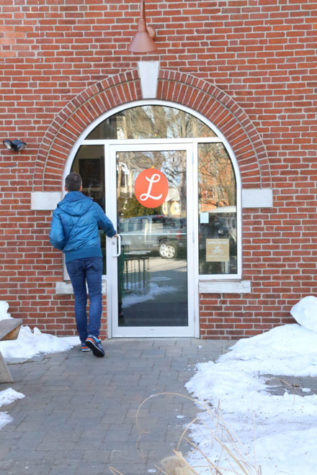 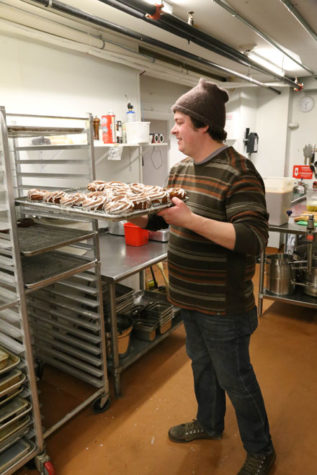 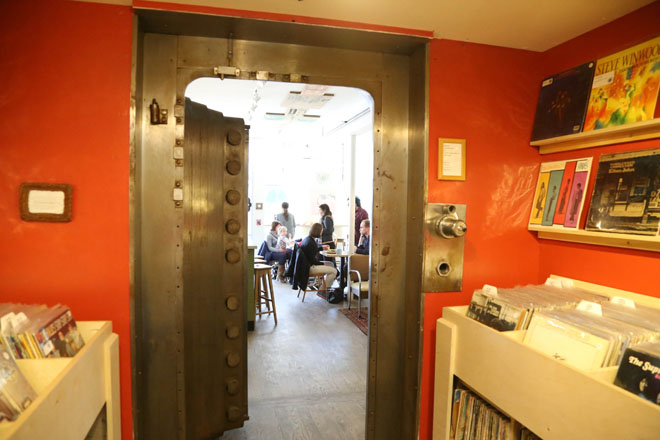 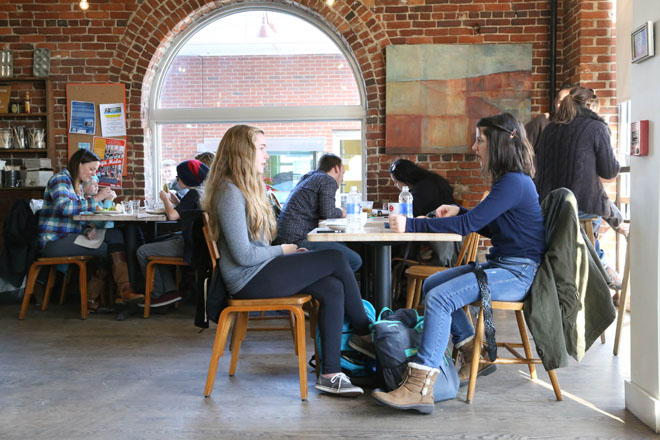 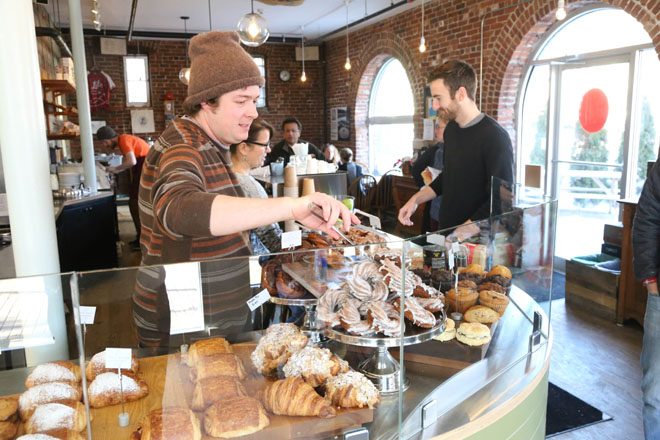 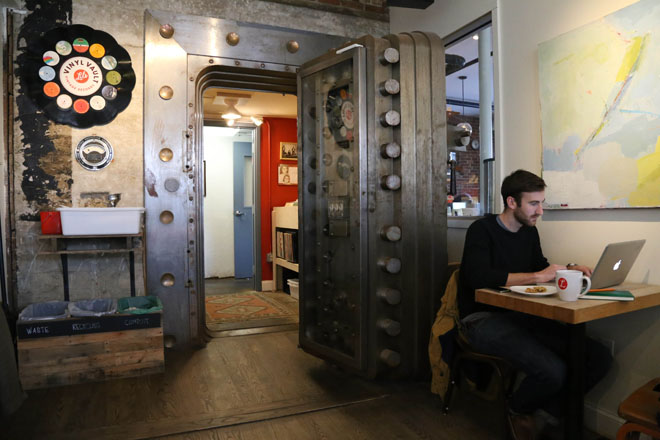 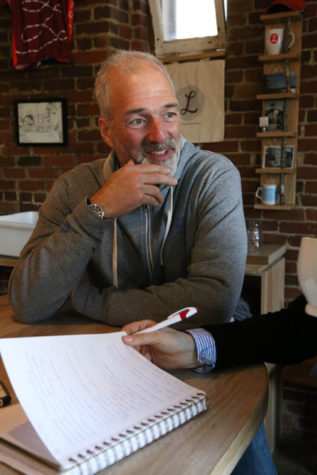 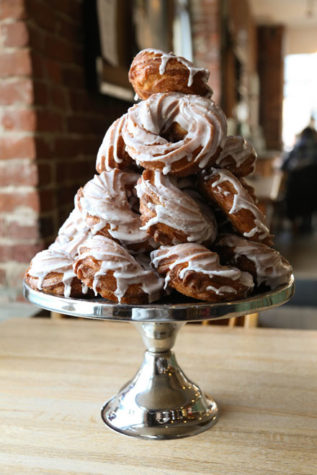 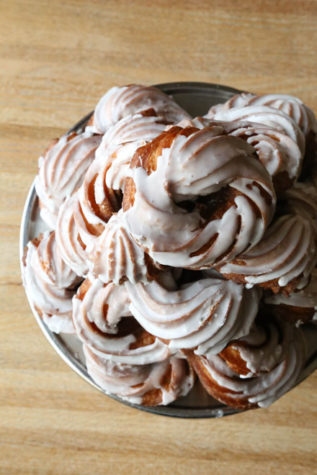 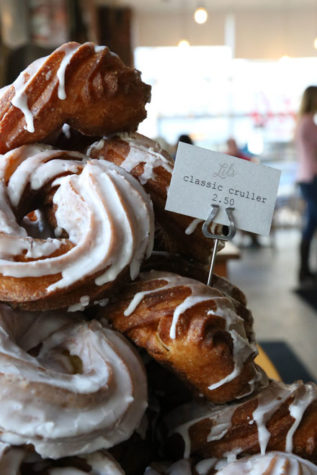 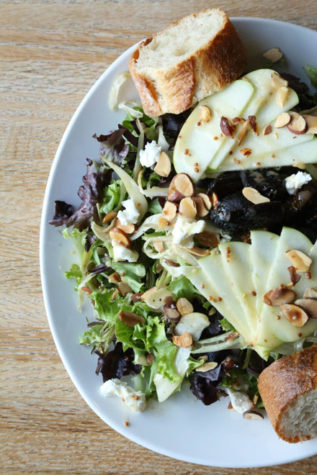 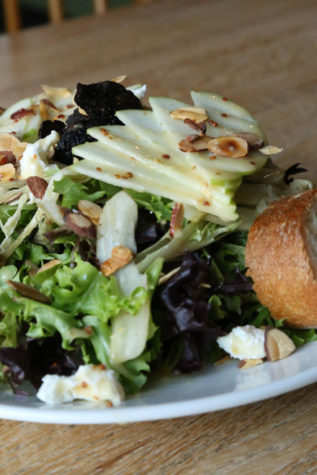 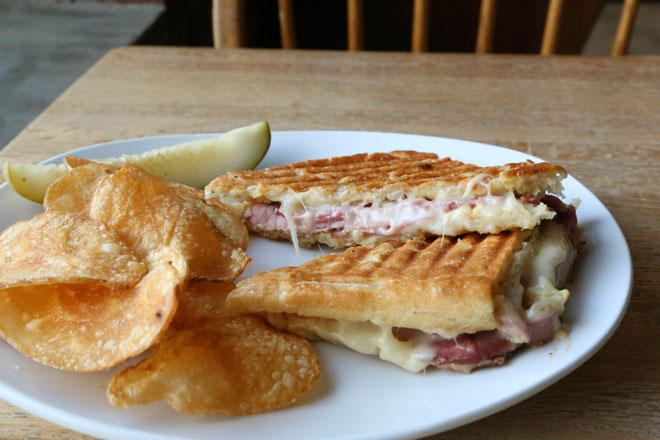 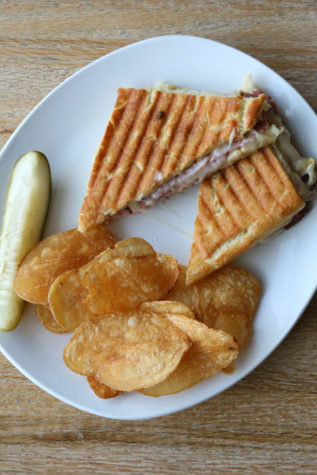 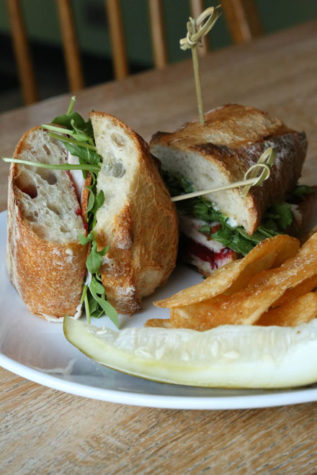 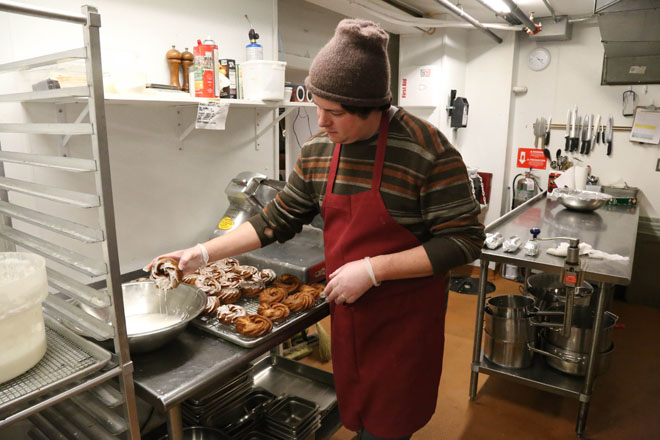 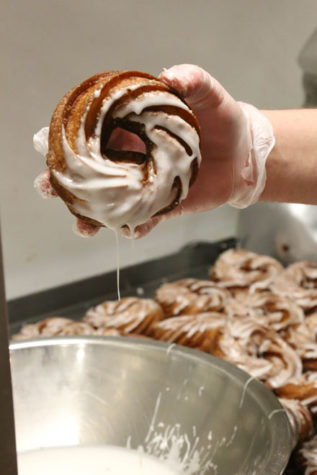 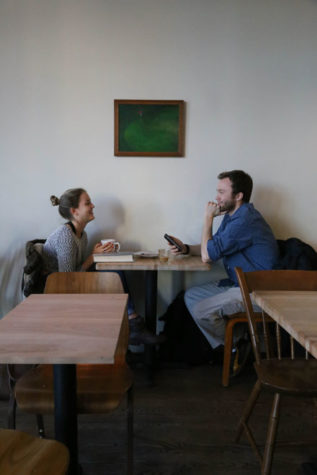 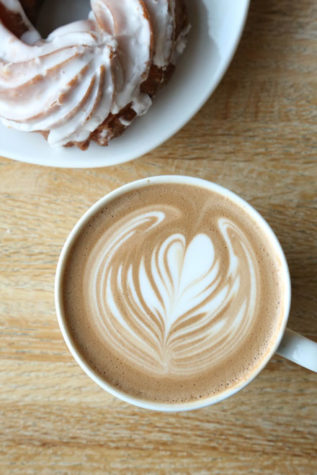 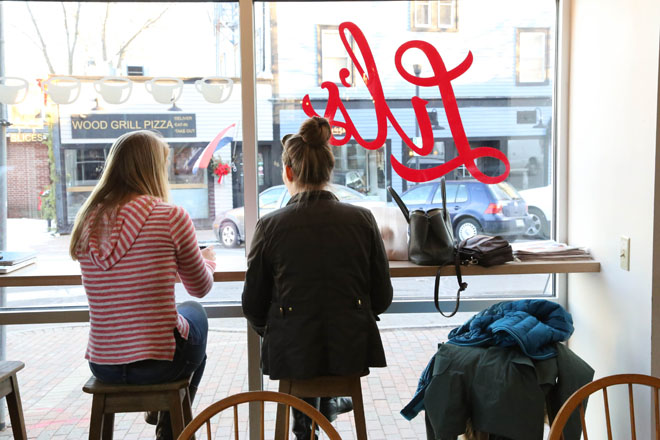 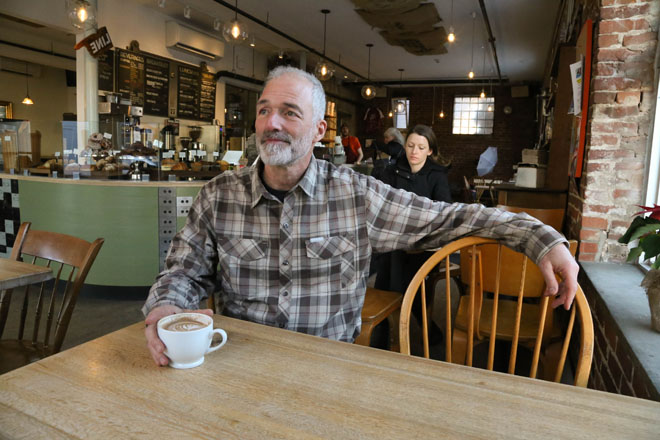 Michael Landgarten has a sweet tooth. The owner of Lil’s Café in Kittery readily admits this to me, as we talk over chai lattes and the café’s signature cruller. I feel like I’ve found a kindred spirit as we chat about the doughnut that brings customers in from near and far. “It started with some harmless stalking,” Landgarten says. “I was following the career of a pastry chef named Jennifer Woods. She’d been working in the area, including around the corner at Black Birch.” He convinced her to help him open Lil’s by creating the product line. “She told me, we’re going to make doughnuts,” says Landgarten, who also owns Bob’s Clam Hut. “It surprised me, but actually it’s the perfect marriage between my frying background and my love of baked goods.” The heavenly cruller is a modified pâte à choux pastry, the type that’s used to make éclairs and other desserts. It’s eggy, rich, and airy. Each puffy, fluted circle gets a quick dip in a sweet glaze. There’s usually a special cruller as well, and we’re lucky enough to be there when a salted chocolate one is on offer. Landgarten tells me that on a quiet day, they’ll sell about 300 of these treats. The day before Christmas, over 700 crullers were fried and bought.

Downstairs is a big kitchen that produces the crullers and all other baked goods and breads for Lil’s, as well as Landgarten’s other restaurants. They turn out a beautiful baguette with a crunchy golden exterior and fine crumb. This and several other types of bread are used for the café’s excellent sandwiches. Ham and Gruyère on buttery focaccia is cooked on a panini press to a crisp and amped up with spicy Dijon mustard. Candied bacon is the star of a big BLT. And a turkey sandwich gets special treatment with a smear of cranberry-orange marmalade on a chewy baguette. Gooey grilled cheese goes well with tomato bisque, one of two soups offered every day. And all sandwiches are accompanied by Lil’s addictive, salty, “hyper-crisp” potato chips.

Landgarten has a lot of enthusiasm for Wallingford Square, which he calls “a hothouse.” The area has become a popular destination in the past few years with new independent shops and restaurants moving in. He credits his neighbor, the Black Birch, with putting the neighborhood on the map. “They’ve been super inspiring and have helped create a tipping point to make this an edgy and creative destination,” he says. Landgarten explains how the town of Kittery has been quick to embrace Lil’s as a “third space,” a place where people can socialize and gather that’s inexpensive and welcoming.

The space, formerly a bank, is bright and sunny. Towards the back, an enormously heavy vault door, evidence of the previous occupants, stands open. Just beyond it is a fun surprise–a tiny room filled with stacks of vinyl record albums for sale. A musician pal of Landgarten’s curates the collection of mostly slightly obscure classic rock, the kind that makes teenagers shake their heads and laugh.

There’s a steady stream of customers on a sunny but cold afternoon. At one table, a pair of women discuss winter surfing. At another, a man works undistractedly on his laptop, sipping from a big mug by his side. Mothers and young children warm up with coffee and cookies. Tandem Coffee Roasters is the coffee of choice at Lil’s, and Landgarten works closely with Tandem to come up with the right blends for Lil’s clientele. “It’s great to have access to people who are so passionate about their product,” he says. Then he suggests I try an Earl Grey latte. “It’s a game changer,” he says. He’s right. For a change of pace from coffee, this cup of tea with steamed milk is a refreshing kind of afternoon pick-me-up.

Landgarten and his ten-year-old daughter visit Lil’s Café in the morning, before she heads to school. They play chess and share a muffin. She tells her dad the café is her home. Indeed, it certainly feels like it could be, but with better coffee and those irresistible crullers.