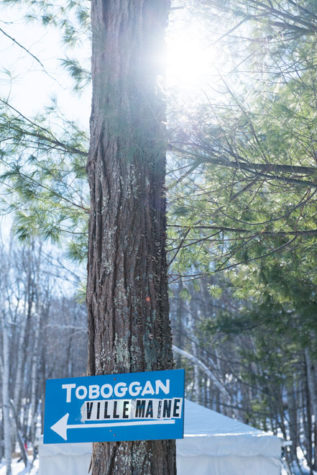 To some, Camdens toboggan chute is just a fun ride, but to chute master Stuart Young, its sacred ground. He adds, Im lucky enough to be part of the history of the town. I love to keep it going. 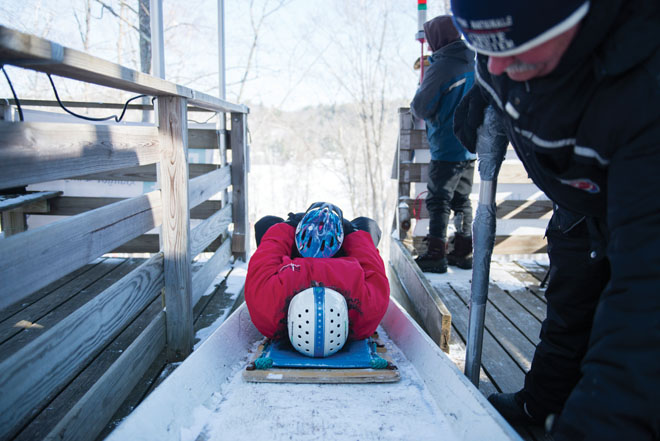 Getting ready to take the plunge. It is extremely important to keep your arms and legs inside the toboggan as it goes down the shoot, since even a brief graze with the side of the shoot can put a hole in your jacket. 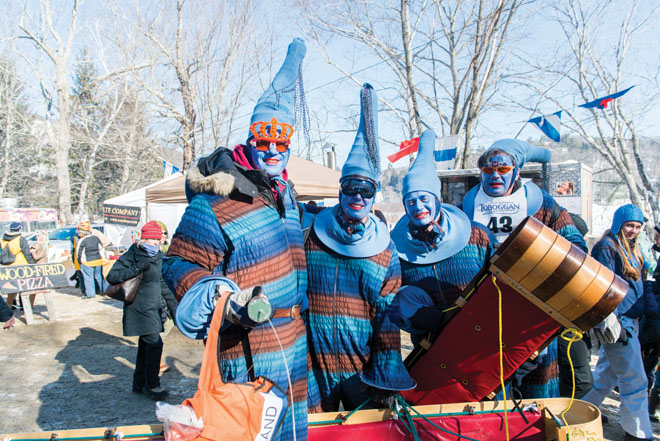 The Royal Dutch National Toboggan Team, from left: Oscar Verest of Camden, Dan Bookham of Rockland, and Hans Haans and Jacques Verest, both of the Netherlands. 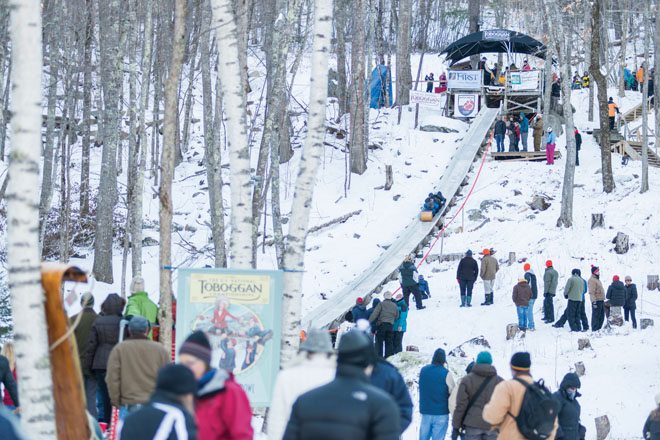 Down the chute: Before the toboggans go flying across the ice, they must rocket down the hill. Its the perfect degree of controlled terror, says Dan Bookham. 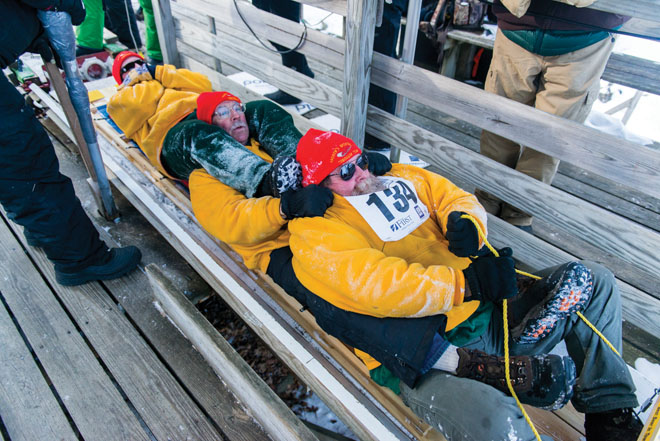 Camden’s Eighth Wonder of the World

The U.S. National Toboggan Championships are held every February in the midcoast community of Camden. Here’s what happens when an entire town, and travelers from afar come out to play.

February in Maine is bitter cold, but you wouldn’t know it from the scene at the Camden Snow Bowl. Despite the chill, which nips and bites like an unruly dog, the air is filled with whoops and hollers, cheers from spectators and music from a live steel drum band. The crowd on the hill is thick and vibrating with energy. Kids run around with cheeks rosy from the cold. Adults are similarly red-faced, but who knows whether that’s from the weather or a splash of brandy in a coffee thermos? At the top of the toboggan chute, the serious but congenial “chute master” Stuart Young motions for the next team to approach. In less than a minute, their turn will be over. In a mere ten seconds (eight if they’re particularly lucky or skilled), they will be spinning across the ice and snow of Hosmer Pond, laughing and loud, spit from the 438-foot wooden structure at a speed that would merit a speeding ticket in certain residential neighborhoods. But at this precise moment, they’re nervous, scared of the ice and the speed, and maybe even a little worried about the competition.

Truth be told, winning isn’t the most important thing at the U.S. National Toboggan Championships. Some participants don’t even want to make it to the finals. “The goal is to get down fast enough so you don’t embarrass yourself, but not quite fast enough that you have to come back for the finals on Sunday,” laughs Dan Bookham, a Camden resident and frequent participant, who calls the weekend “Maine’s Mardi Gras on ice.” Spanning three days (Friday, Saturday, and Sunday), the U.S. National Toboggan Championships is a one-of-a-kind competition—the only organized wooden toboggan race in the country. While Bookham loves the event, he is bluntly honest when asked about the sport: “It’s not as comfortable or as fun as you think,” he says. “It’s not a gleaming high-tech shaft of steel that deposits you onto the ice at high speed. No, there’s a lot of wiggle room. It rattles. It shakes. You are bumped and jerked around.”

And once you reach the bottom, the ride doesn’t get any smoother. In fact, it becomes all the more perilous as you slide from the chute onto the frozen surface of Hosmer Pond. “You imagine that you will come to a gentle stop and slap each other’s backs and all stomp back, picturesque like a J. Crew catalogue,” he adds. “It’s more likely that one of your teammates will tip the wrong way and you’ll go rolling about the ice like hedgehogs.”

He would know. Two years ago, Bookham was inducted into the Royal Dutch National Team, a title that, like the U.S. National Toboggan Championships, sounds more official and grand than the truth. The name might conjure up pictures of sleek, Olympics-ready uniforms and hard-bodied athletes, but the regally named quartet is more likely to show up wearing Muppets on their heads than aerodynamic helmets. The team has never won a championship title— unless Best Costume counts, which given the nature of the event, it probably should.

In case you haven’t gathered, this isn’t an entirely serious sporting event. But like any Maine ritual, it has deep roots. This year will mark the U.S. National Toboggan Championships twenty-sixth year. The Camden Winter Carnival, an event that inspired the Toboggan Championships, dates back even further. “We did research in honor of last year’s twenty-fifth anniversary, and while consulting old programs dating back to the early twentieth century, saw depictions of the winter carnival as a massive, magical event, complete with a queen and her court, ice skating on the pond, horse races, and more,” says Holly Edwards, who has been volunteering with the event since 1998 and has been serving as chairman since 2002. “We have been working toward coming full circle, to reawaken the idea that midcoast Maine in the winter is a place with tons of things to do.” To that end, the toboggan race committee last year teamed up with a newly invigorated Camden Winterfest Committee to create a full week of cold-weather festivities. It’s big business for the area, during the slower season, and a real boon for the Snow Bowl itself.

“A little over a decade ago, the Toboggan Championships was barely breaking even as an event, as was the municipally owned and operated Snow Bowl,” says Edwards.

Although the Toboggan Championships may have “started as a joke,” in the words of Stuart Young, over the years, it has become something much bigger. Teams come from as far away as Hawaii, Alaska, and Montana to compete, and the influx of tourists creates a ripple effect, dropping money into the tills of local businesses. “We continue to grow in revenue and fun-factor,” says Edwards. The 2016 event will mark the second year that the Toboggan Nationals serves as an anchor for a weeklong festival of events in Camden. And this year, Edwards reveals, the WinterFest will have a very special theme: “We are taking the idea of this being ‘Maine’s Mardi Gras’ and making it our official theme this year, all week, and we can’t wait to see the costumes for this year’s race weekend.”

Jokingly, employees of the Snow Bowl and volunteers refer to the chute as the “Eighth Wonder of the World,” because as Young explains, “no one has it but Camden.” He adds, “People look forward to the weekend all year. It’s their little piece of pie.”

Want a slice of the pie? Teams don’t need any previous experience to register; however, Oscar Verest, owner of the Camden Harbour Inn and member of the Royal Dutch National Team, does offer some advice for beginners: “If you’re looking forward, it means you are sitting up and there is too much wind resistance. Instead, remember to lie down,” he says. “You just look up at the blue sky and all you can hear are people cheering. And you just hold on and go with the flow.”