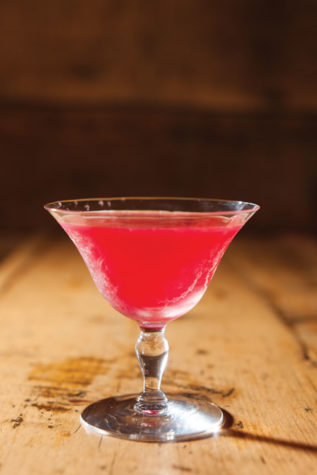 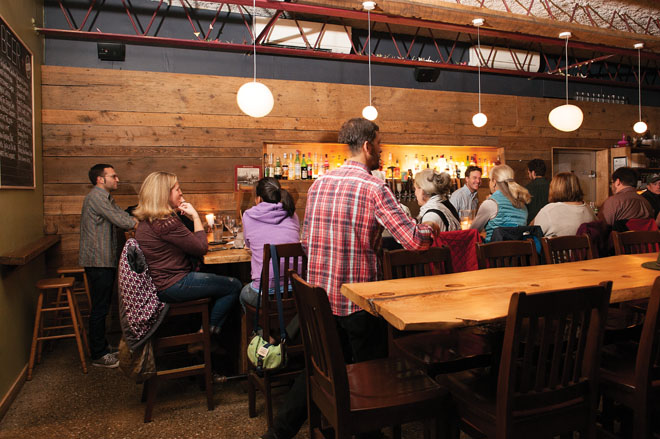 A seat at the bar is like an invitation to a great party. 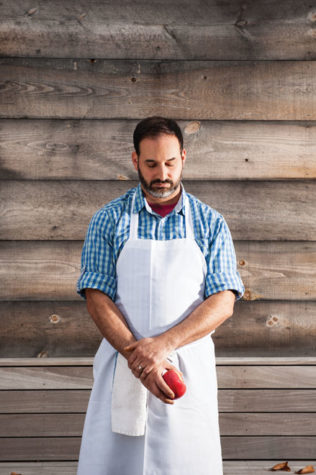 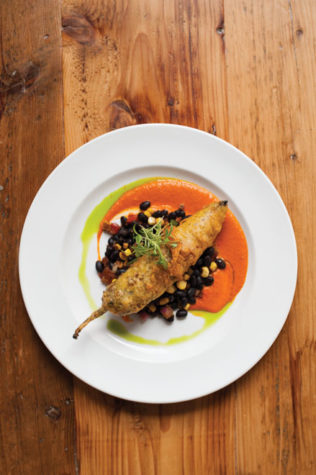 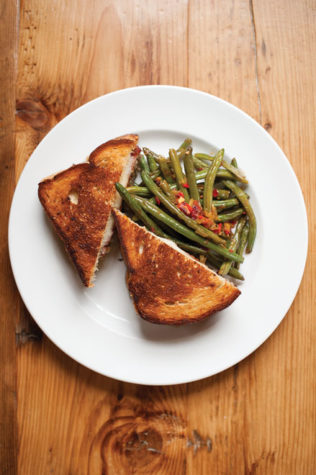 The meatloaf sammie is an all-time favorite dish.

Teamwork, dedication to the profession, and sensational food

Tiny Wallingford Square in Kittery, where you can practically shout across the Piscataqua River to New Hampshire, has become a hot destination in the past few years. Independent shops, cafes, and restaurants now call the neighborhood home. It’s reminiscent of one of those hidden squares you stumble upon by accident in a European city, marveling at your lucky find.

The Black Birch is easy to miss among these storefronts if you’re not looking carefully. It resembles the old post office that it once was, brick-clad and flat-roofed. Hint: look down for the sign, not up. Once inside, there’s no trace of the former tenant. The room is packed tightly with a high communal table in the center and smaller tables along the edges. It’s all decked out with reclaimed wood from a house that once stood across the street, giving the place a vaguely Scandinavian feel. A rectangular cutout gives diners a view into the busy kitchen. The bar is wide and seating is close, perfect for socializing.

Such cozy quarters make for a boisterous atmosphere, particularly on weekends. In the summer, outdoor seating is a good choice. The enclosed gravel-covered courtyard with hanging strands of lights and big tables has the feel of a block party in a very cool neighborhood. In this kind of space, says co-owner Ben Lord, you have to be comfortable making friends.

Next door is an art gallery, Buoy, owned by Alex Mead, who also happens to tend bar at Black Birch. Mead has been friends with owners Gavin Beaudry and Ben Lord for several years. He makes the transition from gallery to bar seamlessly, at ease pouring and bantering while also choosing records for the turntable behind the bar. Vintage Steely Dan fills the space.

Beaudry, an experienced barman, works alongside Mead. He spends a good part of his time mixing up ingredients for the unique cocktails created and served at the bar, including house-made vermouth and bitters. It’s a key piece of what I do here, he says. He’s brewed a batch of falernum, a syrup redolent with almond, lime, and warm spices. Beaudry makes good use of it, along with two types of rum, mezcal, cider, lemon, and Angostura bitters, in a not-too- sweet, punch-like cocktail called “A Famous Olympian.” Such complex ingredients make the cocktail menu very appealing to the adventurous drinker. Mead gives a practiced shake to a Bicicleta Bicicleta, first demonstrating playfully how it should be sung when ordered. The cocktail is a blend of mezcal, Cappelletti (an aperitif similar to Campari), and bitters. It’s vibrantly pink from beet shrub, pretty and almost dainty in a delicate stemmed glass. But one sip gives away the disguise. It’s slightly bitter, slightly sour, and very potent. Ask about this and nearly any other drinks name and you’re likely to get varying responses. It’s all part of the very entertaining relationship between the bartending duo.

On many nights there’s a line out the door, and Lord is busy taking names for tables and seats at the bar. Waiting is eased with a cocktail or beer, and a discussion of what might be ordered. The menu is full of intriguing possibilities. Jake Smith, the third co-owner, is the big talent in the small kitchen. Growing up in Rhode Island, Smith helped his mother and aunts make Syrian specialties. The lamb-stuffed grape leaves he remembers rolling at his childhood table appear on the menu, but now with his own signature, a touch of tomato and cinnamon. He’s a seasoned chef who previously worked for well-known Boston restaurateur Lydia Shire in several of her restaurants. Hes got some excellent help on the line, with a cadre of other accomplished cooks, including chef de cuisine Skye Bonney, who also cooked with Shire.

Many menu items are conducive to sharing, and it’s a good idea to first order a couple of dishes. The very lightly battered chile relleno comes out first, an Anaheim pepper stuffed with a creamy mixture of local goat cheese and mushrooms. It’s served on a bright roasted tomato sauce with black bean and corn salsa, a subtly spiced and colorful dish. Feather-light, house-made ricotta gnocchi is a seasonal specialty stuffed with roasted pumpkin and a variety of earthy mushrooms. The savory cream sauce is a rich luxury, tying it all together.

”We only serve what we would eat or drink, and that’s what steers the menu,” Lord says. The meatloaf sandwich brought to the table is one of his favorites. The locally sourced beef is freshly ground around the corner at another Wallingford Square establishment, MEat. The thick patty with melted provolone cheese and homemade ketchup is served on toasted and buttered oatmeal bread, which adds just a touch of sweetness. Creole green beans come alongside, cooked to leave plenty of crunch and give a kick of hot pepper. The dish is homey and comforting. Black Birchs fish and chips is a menu staple and features an enormous piece of Allagash White-battered haddock. The fried crust is light and crisp, as are the irresistible fries.

Lord and Beaudry spent years meeting over coffee, then beer, working out details for a restaurant concept. ”We took our time, just figuring out what we wanted to be,” Lord explains. ”We hired the staff before we even had the space, surrounding ourselves with pros.” The addition of Jake Smith brought the food into focus. The staff moves around the room on a busy night, keeping the atmosphere upbeat and relaxed, even as a small crowd gathers by the door. They tend to details with conviction; their goal is for some degree of ownership to touch every plate.

When asked how they make this partnership work so well, Beaudry responds, ”We stay out of each other’s way,” and Smith nods in agreement. Of course, they are kidding. It’s clear that the three owners and the rest of the crew enjoy each other’s company very much. Because Black Birch opens its door at 3:30 p.m. in the afternoon, there’s no time for a staff supper before service. Instead, the hungry group gathers late in the evening, sharing a meal and a beer, catching up and reviewing the night’s work. For the Black Birch team, the after-hours meal is a reward for hard work. ”It’s crucial to spend this time together”, says Lord. ”We’re busy every night of the week. We got lucky right out of the gate.” Luck has little to do with making Black Birch such a wildly popular destination. The dedication of a team that works hard, and plays hard, is the real secret.