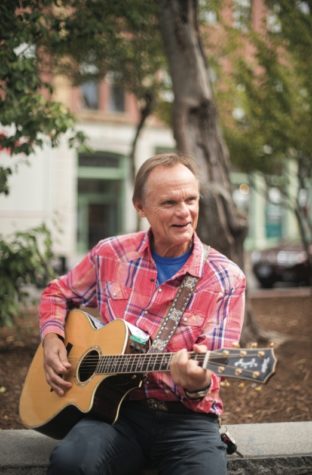 On the Air with Jonathan Edwards: Jonathan Edwards has been writing hit songs and playing for audiences all over the country for almost five decades. He has lived in 18 zip codes and released the same number of albums. His most recent is Tomorrows Child, which was created with the help of musical greats Darrell Scott, Vince Gill, Shawn Colvin, Jerry Douglas, and Alison Krauss.

My adopted mom was a preachers daughter, so we were always involved with church. She was always getting me to sing and there was always a piano in the house. I grew up on gospel music. I remember singing a solo in our huge church sanctuary when I was eight years old. It was a profound feeling to have. I picked up the guitar in military school, and if so many things didnt make sense in my life, all of a sudden something made sense.

Youre known for the song Sunshine, which was released in 1971. The upbeat sound of this song was an interesting contrast to the subject matter, which reflected what was going on in American culture.

I was deemed a behavioral problem in public school, so I found myself in military school and got acquainted with the militaryand disenchanted with it at the same time. My dad was an ex-FBI agent and I narrowly survived a draft board preinduction physical. With all those things in my mind, I had this little folk melody running through my head and those words just spilled out. Very few people really understood that it was a war protest song. I was tired of the direction that our government was taking on our behalf. Its a volunteer military force now, but it wasnt at that time, it was conscription. It is terrifying to think of and thats the culture we lived in in the late 1960s and early 1970s.

What is your connection to Maine?

I always resonated with the Maine experience: hard-working people, real people. I love the summer here and the fall and spring, too, mud season, and all of it. I love the coastline and I just recently got rid of my boat, which was really hurting me last summer but I had no time. Ive always hoped to get a chance to live here in Maine, and it happened.

There are a lot of people who are waiting to get to your stage of life so that they can finally retire, but youre still just as active as ever.

I wake up every morning grateful and happy. I think its in great measure due to the fact that Ive taken good care of my audiences all these years. I make sure that I give it all up every night that I can on stage and audiences respond to that, which encourages me to go even deeper. Even now Im learning so much with every show I do.

How has your approach to music changed over the years?

My songwriting is getting much deeper and more personal and more meaningful. I used to write just anything that sounded good. There is a lot of merit to just letting your soul and spirit fly. Im learning to sing better I think than I ever have and Im listening far more accurately and from a more emotional level than I ever did before.