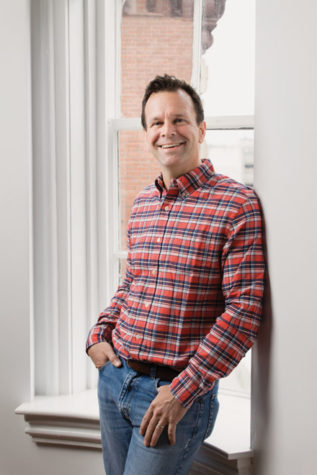 Matt Kearns believes Maine has a lot of clean energy potential, but he also sees the importance of protecting the state’s strikinglandscape. Kearns is the vice president of development in North America for SunEdison and former vice president of business development for First Wind in Portland. “As a society we are coming to grips with the fact that we have to take responsibility for how our energy is produced,” says Kearns. “In addition to the health and environmental reasons to build wind projects, the lasting economic benefits to Maine are enormous.” Kearns’s company is on its seventh wind project in Maine and will have invested around $1.3 billion in the state. One project is the wind farm on Mars Hill, which produces up to 42 megawatts of power—enough to power 20,000 homes in Maine. SunEdison estimates the hill results in a reduction of approximately 65,000 tons of carbon dioxide. Kearns also worked with the Appalachian Mountain Club to create a $700,000 conservation fund, which was used in part to complete the Crocker Mountain and Orbeton Stream conservation projects while leaving a $550,000 fund available for seed money to purchase additional conservation lands. Kearns assisted with the capital campaign and annual auctions for Boys and Girls Clubs of Southern Maine and he is involved with the Maine Audubon Corporate Partners program, which makes nature more accessible for a lot of people and plays an important role in education and advocacy.