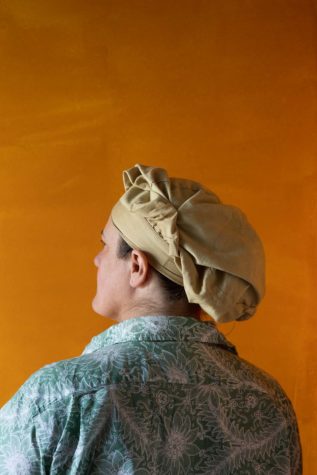 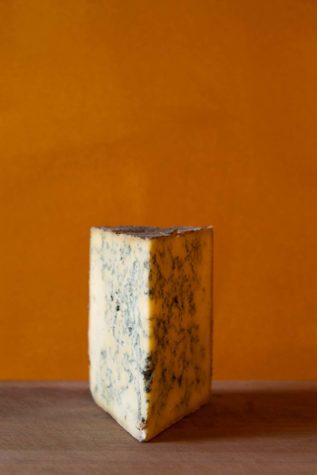 wedge of Cascadilla Bleu, a peppery and pungent, slightly softer blue cheese that is aged for two months. Like all of Lakin's cheeses, it is an original recipe. 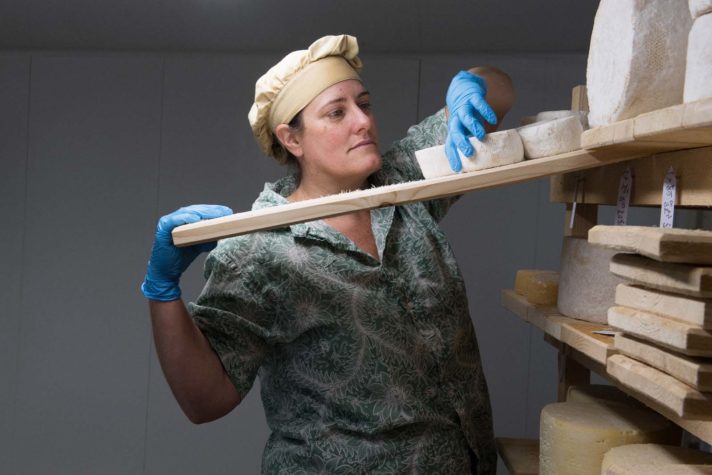 In the cave, the cheeses are aged on boards harvested from the farm’s forest, adding another layer of terroir to the final flavor; they are turned daily to promote even rind development and to help maintain their shape. 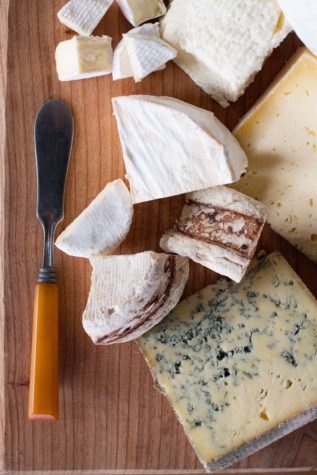 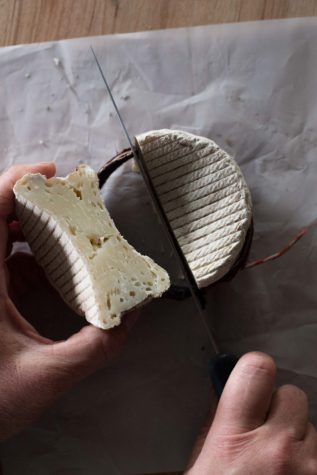 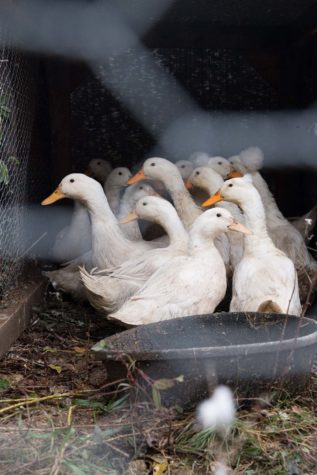 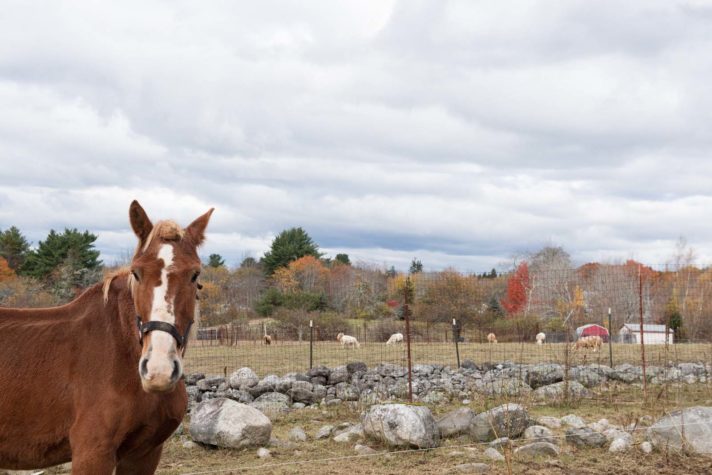 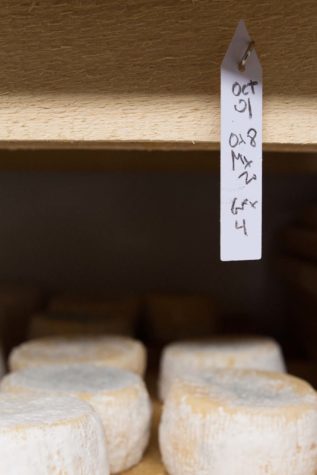 Each aging board in the cave is labeled with a batch number, showing how many wheels were made and of what type of cheese. (Opus 42 ages a minimum of three months; Grandiflora is a washed-rind version of Opus 42.) 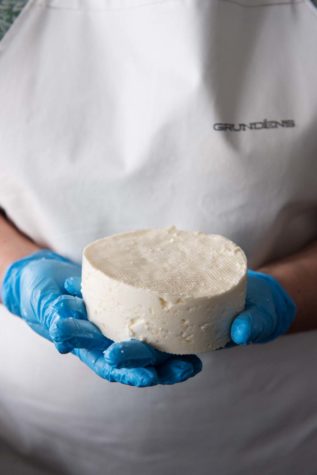 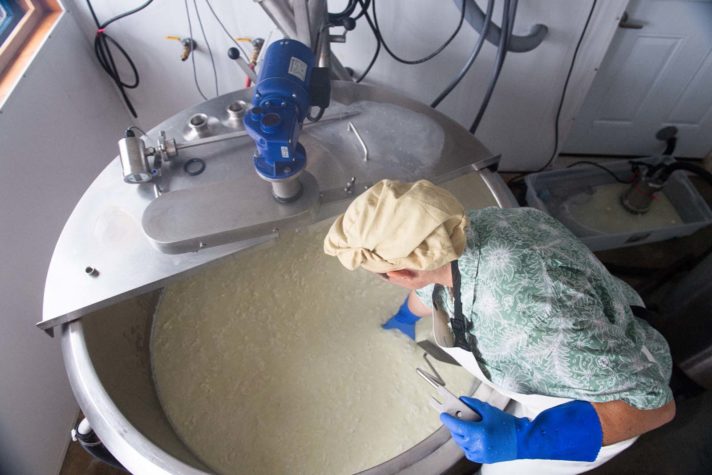 Lakin tests the formation of the curd in her vat pasteurizer for a batch of basket ricotta. The curd will be ladled into baskets and drained overnight to be sold the next day.

I still remember my first taste of really good cheese. As a food-obsessed 11-or 12-year-old, I rode my bike to the small gourmet shop in our Washington, D.C., neighborhood, where I bought a wedge of newly arrived French brie with my hard-earned babysitting money. Back home, I unwrapped the then-exotic cheese and sliced off a piece, carefully cutting away the rind (a rookie mistake, I soon learned) and savoring the buttery texture and faintly funky flavor. This was cheese, I recall thinking, as far removed from the box of Velveeta sitting in the kitchen fridge as our family’s Volkswagen bus was from a Lamborghini.

This memory surfaces as I pull in to the driveway of East Forty Farm and Dairy in Waldoboro, the home of Lakin’s Gorges Cheese since late 2017. I meet cheesemaker Allison Lakin and her husband, Neal Foley, in the combination retail shop and kitchen of the creamery, which Foley created from a former garage be- tween the farmhouse and the barn. Ringed with counters, the snug and cozy kitchen is outfitted with a commercial sink and a large butcher block–topped island, where a board holds samples of Lakin’s artistry: Prix de Diane, an earthy, luscious cousin of brie; buttery, slightly sharp Opus 42; peppery Cascadilla Bleu; and Jig, the one-ounce, bloomy-rind rounds Lakin calls “cheese candy.”

Moving to the circa-1700s farm has been a turning point in Lakin’s business, which she launched in 2011 in Rockport. She’s one of about 90 cheesemakers in Maine, according to the Maine Cheese Guild, ranging from large-scale producers such as Pineland Farms, which produces more than 750,000 pounds annually, to small-scale makers who sell their products solely at farmers’ markets. Lakin currently turns out about 10,000 pounds of single-source, cow’s milk cheese each year, doing all of the work herself. “I’m an unusual artisanal cheesemaker within the group in Maine because this is my only source of income, and has been since I started the business,” she says. “Moving to the farm meant I could quadruple my production.” She and Foley are raising pigs, Pekin and Muscovy ducks, and chickens, all of which are fed whey from the cheesemaking process. “I also want to create a closed system, so what is technically a waste product from cheese production is then going back into another income stream on the farm,” Lakin says. “I am not just working to pay the bills, I’m working to build a future.”

Along with Foley, a farmer and chef who attended the famed Ballymaloe Cookery School in Ireland, Lakin uses the creamery kitchen as an educational and entertaining space, where they host classes and tastings. Their monthly supper series is held under the grape arbor or in their 1774 farmhouse. Sliding screened windows offer a view into the spotless cheesemaking space next door. Down a small hallway are two cheese caves: temperature-controlled rooms for aging cheese, which are chilled by standard air conditioners. Lakin is one of a growing number of farmers and small business owners using CoolBot technology, which allows air conditioners to operate safely at colder temperatures than their normal range, creating a cost-effective alternative to a walk-in cooler.

Lakin has approached both making cheese and developing her business using a methodical series of incremental steps. A native of upstate New York, she attended Cornell University planning to be a physician, but wound up graduating with a degree in anthropology. Her first career, in museums, took her to various locations around the country. “It’s incredible training for eventually starting your own business, especially if it’s a small museum, because you end up wearing a lot of different hats,” she says. In 2002 she was back in New York, having been hired by an educational farm to run its adult programming and market the cheese the farm had been making for about a year. “I didn’t know anything about cheese, and my approach to any topic that I’m trying to learn about is to get as hands-on as possible,” Lakin says. She soon discovered that there is more to the process than simply turning milk into cheese, and that the cheesemaker where she was working was missing the mark. “There’s this whole other side of cheesemaking: the affinage, the aging of the cheese, which has a lot more nuance to it,” she says. Lakin suggested to the farm owners that she could do a better job, and was sent to a cheesemaking short course at the University of Wisconsin–Madison’s Center for Dairy Research. “I discovered that, not only was I motivated, but what worked for me was I loved the science of it, I loved the magic of it,” Lakin says. “And I’m a ham, so I enjoy teaching. I was just outside of Manhattan at the time, so I was going into the city and doing cheese and wine pairings with various restaurants and shops—the business grew exponentially very fast.”

Following a final stint in the museum world—at the John and Mable Ringling Museum of Art in Sarasota, Florida—in 2006 Lakin decided she was tired of renting. “I moved to Maine because I could own a house here,” she says. “I have longtime friends here, and I just fell into it.” She worked in the office and as a relief cook

for the schooner Mary Day in Camden for a summer season, and also did nonprofit work in Maine until she realized she was no longer enjoying it. Family and friends urged her to give cheesemaking another go. In 2011 Lakin leased space from Cathe Morrill at Rockport’s State of Maine Cheese Company, where she worked side by side with longtime cheesemaker David Baker, who became a mentor and friend. “Zero overhead is an incredibly rare opportunity if you’re in food manufacturing,” she says. “Here I was, running my own business in this shared space, but I also had a cohort, which was a real gift.” Lakin named her business for the gorges that dot the landscape in Ithaca, New York. “I enjoy language plays, and it seemed that would be a fun way to go because the cheese is, of course, gorgeous,” she says. Her Cascadilla Bleu cheese is named for the main gorge that runs through the Cornell University campus.

Lakin’s first cheese was her signature basket ricotta, which she initially sold at a small farmers’ market at State of Maine Cheese Company. She soon expanded her line to include aged cheeses while developing a delivery corridor to restaurants and retailers between Rockport and Portland. “I like maintaining my delivery route because on a weekly basis I can get feedback,” Lakin says. Although she now works with distributors to transport her cheeses as far away as New York City, a core group of 25 customers has been with her since the beginning. Scratch Baking Company in South Portland has a standing weekly order for her ricotta, which the bakery uses in its pastries and pizzas. Colin Kelly, the chef at Gather in Yarmouth, will call Lakin as he plans new menus to brainstorm new ways to use her cheeses. “I’ve worked on these relationships,” she says. “Guy Hernandez from Lolita in Portland came up with his wife and son and cooked at one of our dinners here over the summer. They spent the night at our Airbnb, and it was so nice to have a relaxed evening with them.”

Among Lakin and Foley’s plans for the farm are to eventually have six to eight dairy cows; three are already in residence, two of which are pregnant. Her own herd would allow Lakin to rebrand Lakin’s Gorges as a farmstead cheese operation—defined by the American Cheese Society as a producer of cheese from milk collected on the same farm where the cheese is made. For now, the milk for her cheese comes from Springdale Farm in Waldo, where the Whitcomb family raises Jersey and Guernsey cows, breeds prized for their high butterfat content. “The reason I’m a cheesemaker is that I love milk,” Lakin says. “I want my cheeses to be a celebration of what the milk tastes like, and I make very unfussy cheeses.” That said, she has become skilled at affinage, even swabbing her new caves at the farm with the bacteria from her former aging space to maintain the flavors of her cheeses.

When I ask about her process, Lakin gets especially animated describing the creation of her Cascadilla Bleu. All cheese starts the same way: the lactose in the milk is converted to lactic acid by adding bacterial cultures in various combinations depending on the desired end result; for her blue cheese, she introduces Roquefort mold culture at the same time. Because mold is activated by oxygen, once the cheese is shaped into wheels and in the aging cave, Lakin pierces holes in it for the mold growth to start. “One of my absolute favorite things about the blue cheese is that, from one wheel to the next, I have no idea what it will look like when I crack it open.” The blue veining pattern can differ considerably from one wheel to the next. “I think this batch looks something like granite,” Lakin says, indicating the wedge of Cascadilla Bleu on the board.

I let a piece of the creamy, nutty cheese sit on my tongue, savoring its complex flavors and appreciating that I know its story. From that first, swoony taste of French brie all those years ago, my deep affection for cheese has been about both pleasure and provenance: Where does it come from, how is it made, who is the maker? The alchemy that turns milk into cheese is part of the story, of course, but so is place and time. For Lakin, stories are what weave together the threads of her life, and have brought her to this place, in this time. “I very much feel like I’m doing what I was academically trained to do,” she says. “I just tend to have more mud on me.” 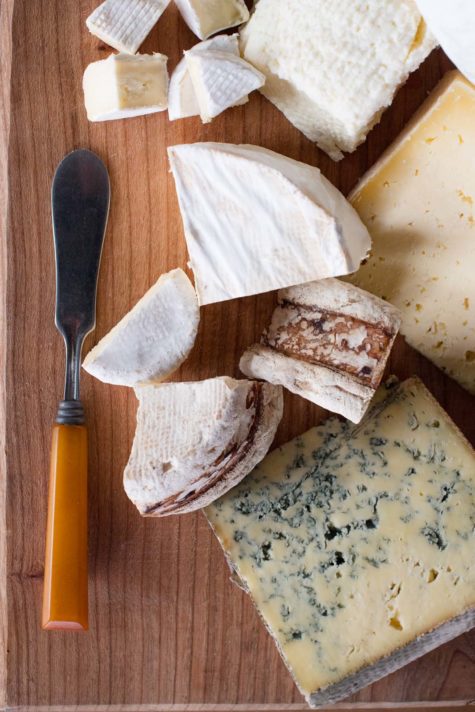 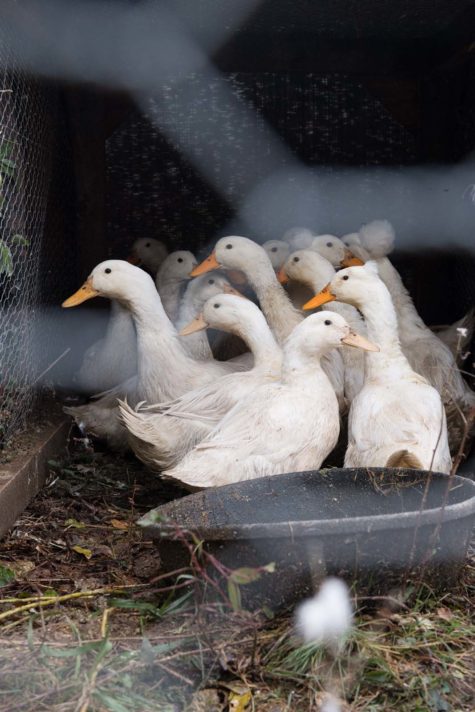 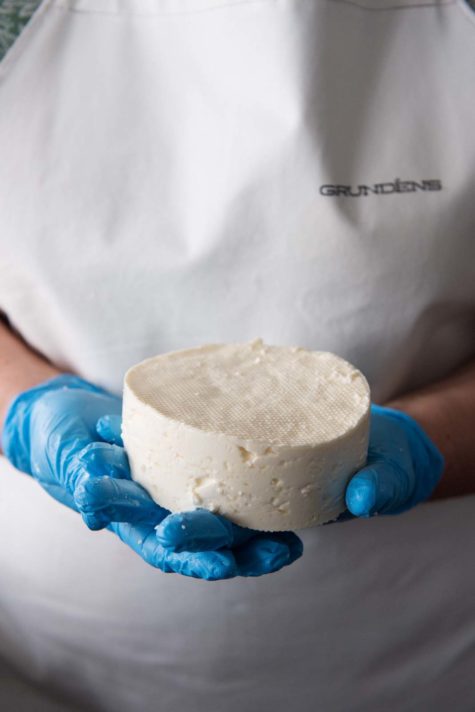