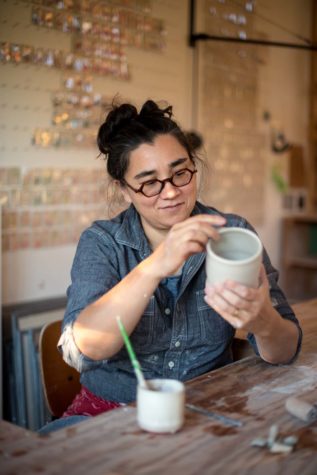 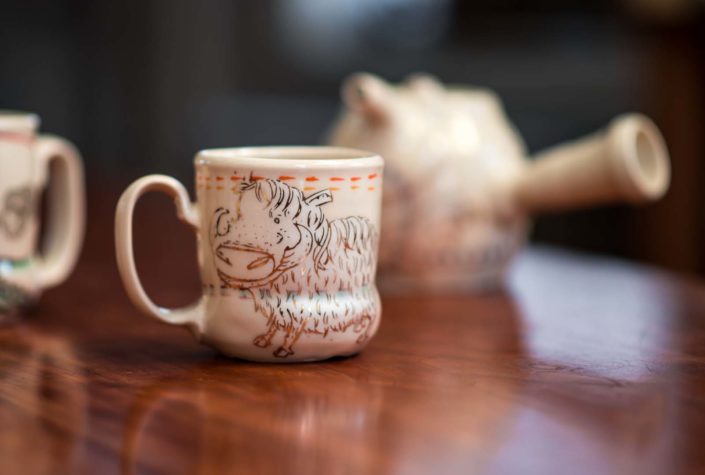 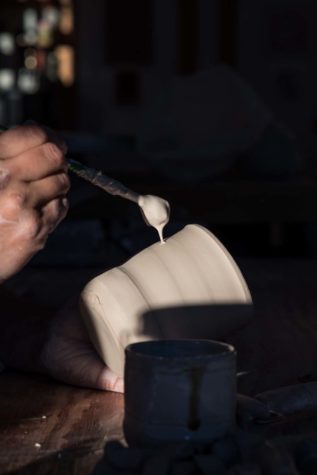 A Message in a Cup

Potter Ayumi Horie uses her work to express herself while sparking larger conversations about politics, society, and identity

Ayumi Horie isn’t striving for perfection. Although she’s a master of her craft, she’s continuously learning and looking for new ways of doing things. “It takes a lifetime to learn how to make something well and to make it in your own voice,” she says. “That’s a reason I like ceramics. I feel like an endless beginner.” The Portland potter has moved well beyond the novice level, though. Horie, who grew up in the Lewiston-Auburn area, has won numerous awards for her work and has led workshops and lectured all over the country and world.

As a young adult, Horie worked as a photog rapher, but she often felt disconnected from  the work she was creating. Discovering ceramics through night classes helped her find  “a more meaningful way to make a living,”  she says. She liked working with her hands and enjoyed the utility and malleability of clay. “I think I was attracted to whatever utopian idea I had about life as a maker,” she says. Horie’s work has evolved over the past 20 years, and her most recent work utilizes more color, with whimsical drawings of animals on many of her pieces. Throughout these changes, ramen bowls have remained a favorite to make, says Horie, because of the challenge of making their sweeping curves. She also enjoys making cups, mostly because of their ubiquity and intimacy. “Cups are small enough to experiment with and all-purpose enough to use in daily life,” she says. She also finds art in the everyday task of stacking wood and is the beginning stages of a book that will explore the history of the shore around the world.

For Horie, pottery and art aren’t just a way to express herself. She uses them to comment on social and political issues to help effect change. She’s working with the Democratic Cup, a project that raises money for progressive causes by selling cups designed by artists. She started a popular Instagram account, Pots in Action, that features ceramicists and educates people about clay and its role in the world. “I’m using that platform as a way to amplify marginalized voices,” she says. Horie also worked on a collaborative public art project in Portland, Portland Brick, which uses sidewalk bricks to tell stories about the city. Storytelling and connecting with people are important elements in Horie’s work. And, because she’s not looking to be an expert, it’s OK if her pieces don’t come out perfectly. “There’s an element of chance and risk in ceramics that makes it a little more high-stakes than other mediums,” she says. “I think it’s a metaphor for being human.