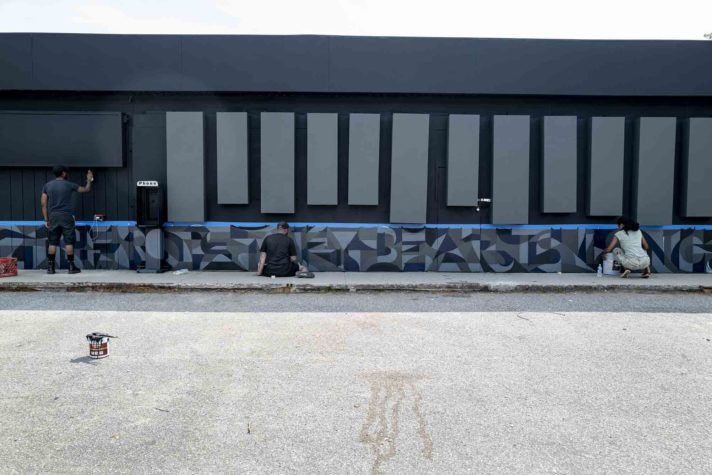 A Place of Reflection

The former gas station on Portland’s Congress Street is striking, with its shoebox-shaped exterior blanketed in black paint. But there’s a deeper message behind the blacked-out structure and the thirteen gray boxes, geometric lettering, and black figure suspended from the former gas price sign.

What was once a building that was only identifiable by its proximity to other businesses is now a temporary memorial to violence against Black people. Created by the Indigo Arts Alliance and several local Black artists, the public art installation, Counting from Thirteen, connects a line between the killing of George Floyd and the thousands of Black people who have been lynched since the thirteenth amendment abolished slavery in the United States in 1865.

Daniel Minter, an artist and cofounder of Indigo Arts Alliance, said he purposely did not make the meaning of the public art display obvious. Inspired by the Equal Justice Initiative’s National Memorial for Peace and Justice in Montgomery, Alabama, which includes an exhibition of hanging steel columns memorializing the victims of lynching, Minter created the gray boxes of staggered sizes to represent the lives lost. Below the boxes are words— “The rope they bear is long,” a line from a Paul Laurence Dunbar poem about the lynching of an innocent man—that are obscured by the abstract, geometric design of the lettering by artist Ryan Adams. You can read the line on a plaque about the piece, but Minter says he didn’t want the installation to have overt images of Black suffering because white people are programmed to ignore it. “It’s been laid out and laid out and laid out again,” he says. “If they want to find anything, they have to look. You have to do the work yourself.”

Where the former Gulf Express Mart had advertised gas prices is a sculpture of a black figure kneeling, with an arm in the air. Titi Baccarat, who created the sculpture using found objects, drew inspiration from the national protests following the death of Floyd. Baccarat, an immigrant from Gabon in central Africa, says he had never been to a protest before marching in Portland. Following the reception and unveiling of the installation in July, two other local artists, Rachel Gloria and Ashley Page, created a mural on one of the walls with floral shapes and cyanotypes of Black people killed by racially motivated violence.

The owners of the Francis, a boutique hotel across the street, bought the property in May for a future hotel development, which has been delayed by the pandemic. Co-owner Tony Delois, who reached out to Indigo Arts Alliance to initiate the public art project, says construc-tion likely won’t begin until next summer, so he will be working with the arts organization to determine how long they want the installation to stay up. Adams, who often paints murals that are later covered by other art, says he hopes the building is a place of reflection for people while the installation exists. “Everything’s temporary,” he says. “You’ve got to love it while it’s there.”