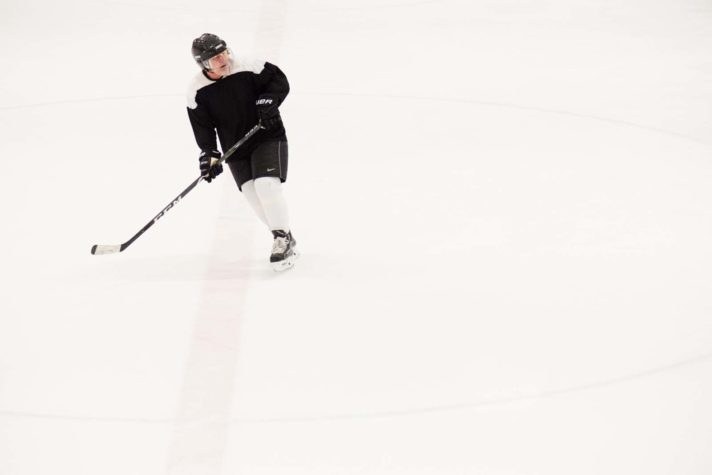 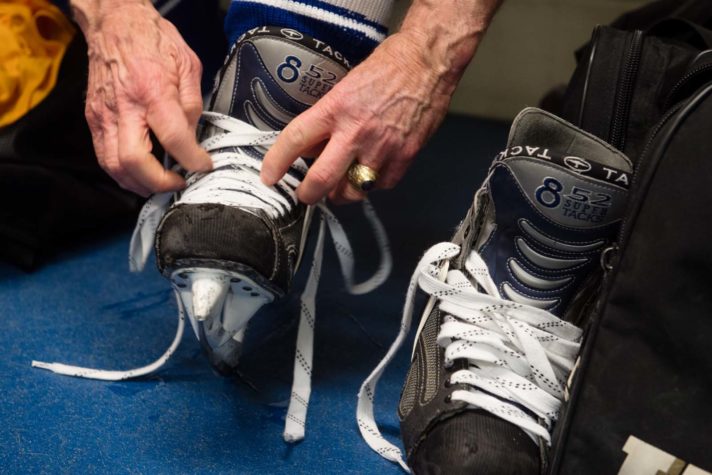 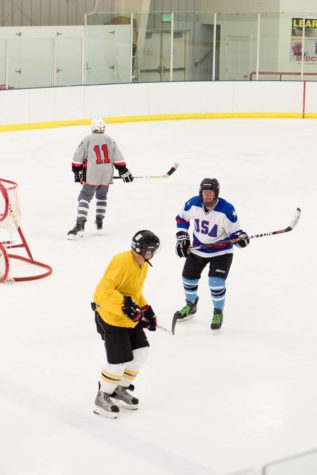 Action on the ice. 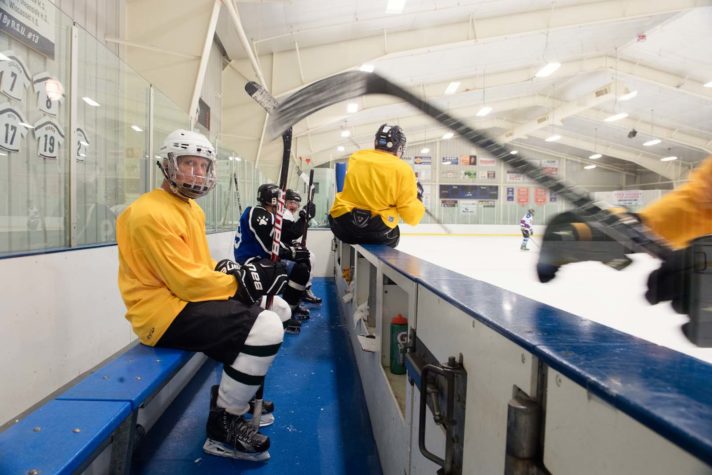 // Frank Morrill on the bench. 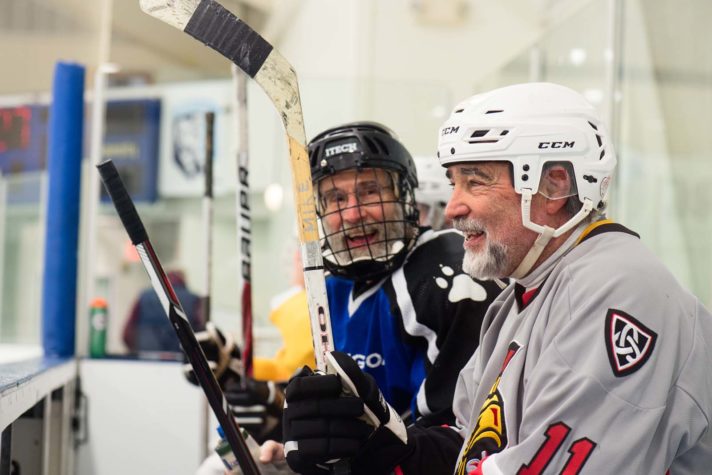 Peter Mills and Mike McCune share a laugh on the bench. 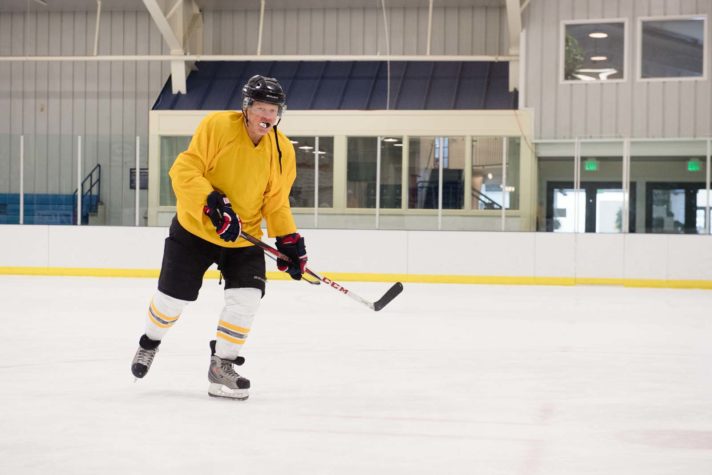 Paul Trueman is ready for the puck 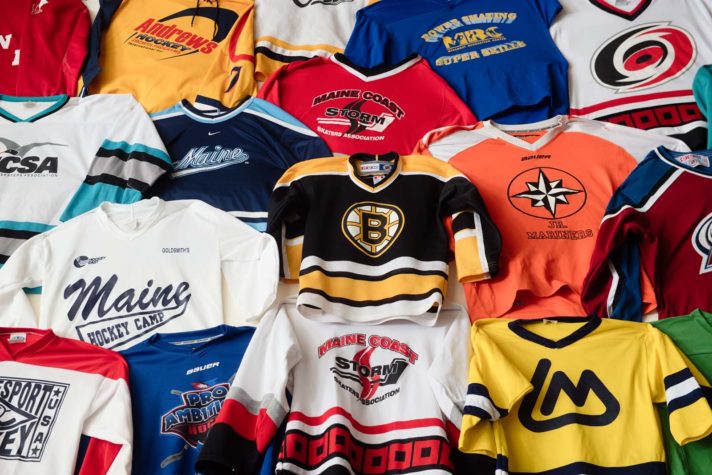 An array of jerseys. 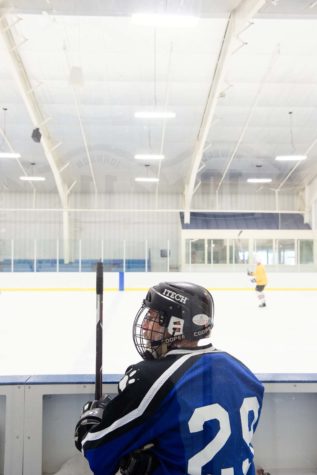 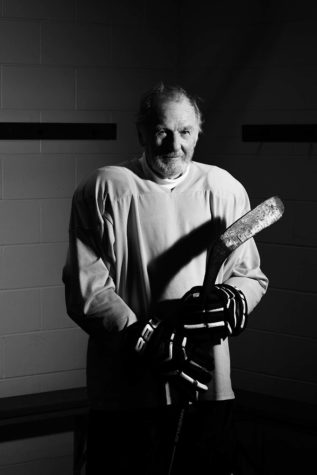 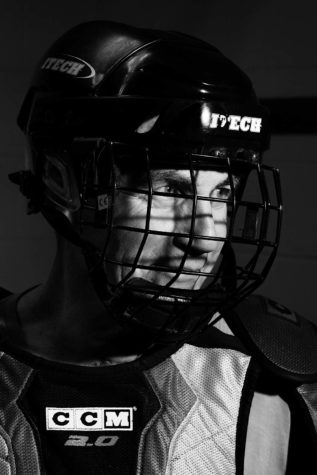 With semiweekly games in Rockport, the Dusty Pucks have fun keeping their bodies fit and their minds sharp.

There are few sports—especially in the dead of winter—that are social, exhilarating, and fun while providing a full-body anaerobic workout that enhances muscular strength, endurance, metabolism, balance, and agility. For people in the second half of life, there are even fewer activities that deliver such a range of benefits. As a lifelong recreational ice hockey player who is neither a runner (too solitary) nor a golfer (takes too much time), the essential appeal of the game for me is that it is an enjoyable way to get phenomenal exercise while hanging out with friends.

I’m not the only older adult who feels this way about hockey. Twice a week from mid-September through early April, a group of me calling themselves the Dusty Pucks suit up at Rockport’s Midcoast Recreation Center and take to the ice for an hour of full-equipment no-contact ice hockey.

I meet up with the Dusty Pucks for their Thursday skate on a sunny mid-February morning at the center—a modern complex just off Route 90 with exceptional ice, tennis, and fitness facilities and programs. The warm camaraderie of the group is immediately evident from the good-natured banter and conversation in the locker room, where I join the team in donning my equipment and lacing up my skates. As the Zamboni exits, the group glides onto the freshly surfaced ice and after a ten-minute warm up, we divide into two sides and the game commences. There are rarely goalies (Midcoast Recreation Center director Jesse Simco says it’s hard to find goalies in the group’s age range), but the nets are fashioned with corner cutouts to keep scoring challenging. The play flows fast and smooth, with a lot of good passing, end-to-end skating, and plenty of scoring. The swiftness and skill of most of the players belies their age. Indeed, with gray hair and other signs of age hidden by helmets, masks, and equipment, any casual observer would be surprised to learn the average age on the ice is almost 70.

As spirited as the Dusty Pucks are, none of them take the strenuousness of the game lightly and recognize that to play a sport like hockey—with a lot of high-intensity exertion and the ever-present risk of simply falling on hard ice—one needs to be in decent physical shape. “We’re getting too old to be weekend warriors,” says Paul Trueman, who is in his early 60s.

For most of the men playing with the Dusty Pucks, keeping in hockey shape means doing other exercise during the week as well as maintaining good eating habits. A study on recreational “pick-up” hockey by the McGill University Health Centre found that players (in their late 40s) would have up to 50 times less chance of a heart attack by exercising three to four times a week. Just in case, though, as in most arenas these days, there’s a heart defibrillator at the Midcoast Recreation Center.

If there were a team captain of the Dusty Pucks it would be Bill Sepe, who at 84 is the oldest of the group, and arguably the fastest skater. Spry and good humored, Sepe was involved with creating the group about six years ago and complements his hockey with daily stretching, public skating two other times a week at the same arena, and numerous other activities. He and several of the other Dusty Pucks also do inline skating at the Recreation Center in the summer. “It’s all about play, keeping active, and having fun with friends, which is also great for your mental state and overall well-being,” says Sepe, who continues to work as an architect and builder. “Playing hockey keeps you mentally sharp, because you’re engaged in following the fast movement and interaction of players, playmaking, and constant passing of the puck.” Research clearly backs up Sepe’s remarks. The AARP cites a recent study reported in the journal Neurology: Clinical Practice that concludes, “Physical exercise at a rate of at least two hours a week can help older adults keep their minds sharp.” The findings reinforce prior studies that show a direct link between exercise and brain health. “We found that exercising for at least 52 hours [over six months] is associated with improved cognitive performance in older adults with and without cognitive impairment.”

According to the digital magazine and blog HealthFitnessRevolution.org (HFR), the health benefits of playing ice hockey run the gamut from burning calories and fat to cardio improvement and greater muscular strength. Notably, states HFR, hockey also develops the spirit of teamwork, improves hand–eye coordination and communication skills, and, like most exercise, gives the brain and mood a boost through the release of endorphins.

Dusty Puck regular Jack Ruth is a longtime hockey supporter in the midcoast and is committed to the sport; in addition to playing, he helps out as a coach with the center’s under-six youth program. Steve O’Bryan has been playing hockey for “well over 60 years” and at 78 still enjoys stepping out on the ice with the Dusty Pucks. Others have taken long breaks and gotten back to it, like Peter Mills, who hadn’t played organized hockey since 1990 but started with the Dusty Pucks and is loving it. Russian-born Igor Myachin, a lifelong fan of the sport, didn’t pick up playing hockey at all until four years ago; his strength, speed, and skill are impressive, given he’s a relative newbie and 60-something. Other Dusty Puck players include 74-year-old Cabot Lyman of Lyman-Morse Boatbuilding, who is a 2017 Maine magazine “50 Mainer” and owner/developer of 250 Main Hotel in Rockland.

Paul Salois, one of the younger players at 58 (there’s an informal age threshold of about 60 to play, but exceptions are made), suffers from vestibular-related vertigo, and found that playing hockey significantly helps keep his condition in abeyance. His doctor agrees and encourages him to keep playing. Salois also works on balance issues by riding a unicycle in the parking lot.

Sitting on the bench chatting with Bill Sepe, I ask if he has played hockey his whole life. Sepe smiles and quips, “Not yet.” These midcoast hockey masters are in it for the long run, fueled by friendship, fun, and a love of the sport. Suited up in their equipment, helmets, and masks, they skate, pass, and score with youthfulness and remarkable vigor. By all accounts, the Dusty Pucks, at least when they’re on the ice, are ageless. 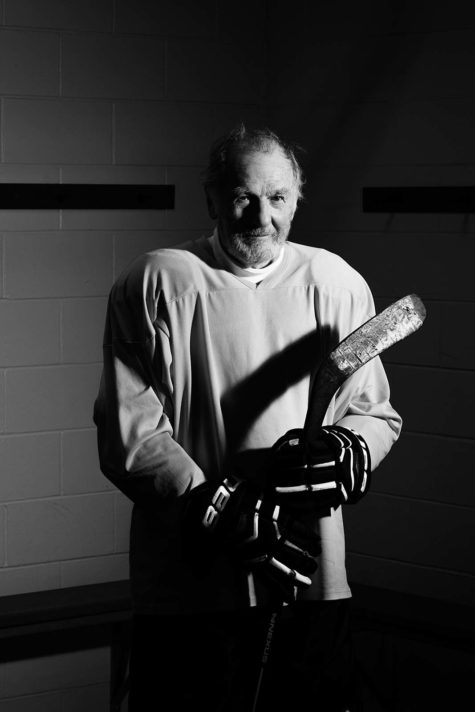 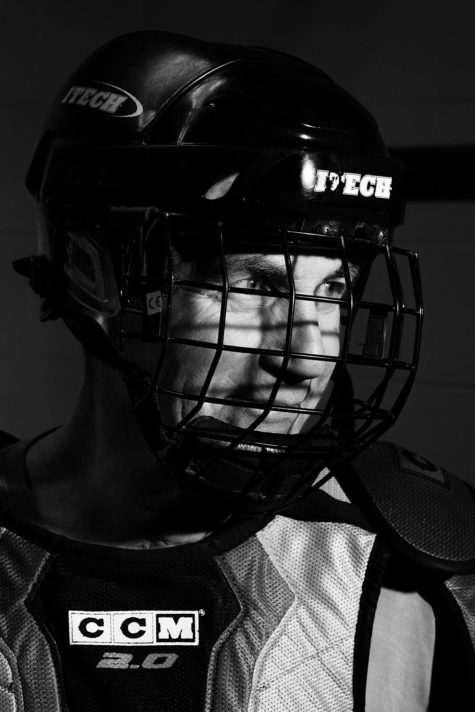