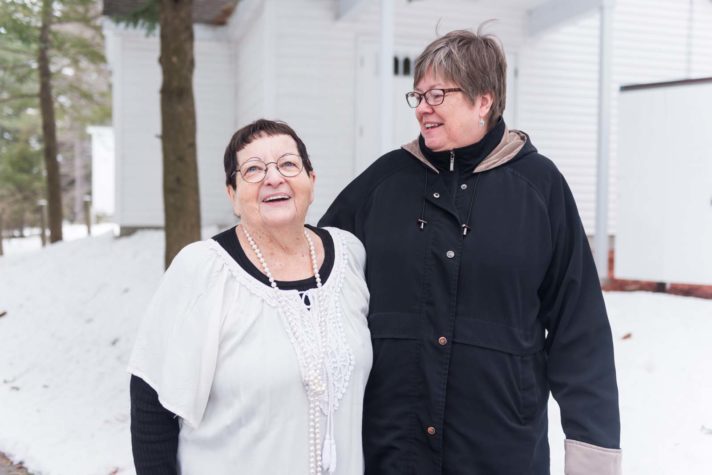 V. Louise Reid’s office on the third floor of the Old Orchard Beach town hall has a view that even corporate CEOs would envy. From the window behind her desk, I watch the waves roll in to a stretch of white sand beach, deserted on this bleak midwinter day. In a few months, the beach will look more like the paintings and photographs decorating Reid’s office walls—packed with vacationers enjoying the sun, sea, and amusements in one of Maine’s most popular summertime resorts. While her view may change, Reid’s position as assistant town manager remains much the same in all seasons. Through 14 years and six town managers, she has been a stalwart constant in Old Orchard Beach.

For some of Reid’s tenure, the political scene here was as unpredictable as a ride at the beachside Palace Playland. “I’ve been acting town manager three times,” she says. “I think what I offered to this town more than anything else is historical continuity—knowing what’s gone on and what has been done before.” She also offers a high level of energy and a recall for details that would be impressive in someone half her 81 years. And she’s someone who simply gets things done, including the advance work for Old Orchard Beach to join AARP Maine’s Network of Age-Friendly Communities. “Last June, [Town Manager] Larry [Mead] came out to my desk with a packet of age-friendly stuff from the AARP, put it on my desk, and said, ‘Make it work,’” Reid says. Part of the application process for the age-friendly designation is a community survey, which Reid helped pass out to voters at a local school on Election Day. “I jokingly said, ‘Oh, please take this; if you don’t fill it out they’re gonna fire me.’ And people went over to Larry, ‘What do you mean you’re firing Louise?’ But we got more people than Saco, which is a city, to fill out that survey.” Mead is effusive in his praise for his colleague. “She is, simply put, a gift to our community,” he says. “Louise consciously lives her values each and every day, giving her love, care, time, money, talent, and spiritual support to others, and especially to those who are sick, vulnerable, and in need. At the close of each workday Louise asks me, ‘Is there anything I can do for you, Larry?’ That is how she lives her life.”

I’m charmed and fascinated as Reid tells her story. Born in Toronto, her childhood dream was to be an opera star. In her teens, she won a scholarship to the Eastman School of Music in Rochester, New York, to study voice and piano. She and her mother (her father had died when Reid was an infant) moved to the United States and Reid became an American citizen. A life in opera, however, was not to be. “I learned quickly at the Eastman School of Music, ‘You have a beautiful voice, and you’ll do very well singing in the choir,’” Reid says. Instead, she followed her mother into the Salvation Army.

“I always thought I had a calling to be a Salvation Army officer,” she says. It was through the army that she met her husband, Bob Reid, whose family had a deep connection to Old Orchard Beach. “They came here for summers, for the camp meetings held in the campground here,” says Reid. “Bob became the first army corps officer for Old Orchard Beach— we were here almost five years and we loved it.”

According to the Maine Historical Society, the Salvation Army’s history in Old Orchard Beach dates back to 1885, when the organization began to hold meetings in the pine grove that was part of a summer colony established by Methodists in 1873. As officers, the Reids lived next to the corps headquarters. Like many in Maine they didn’t often use their front door, but one chilly fall evening Louise heard something on the front step. “I said to Bob, ‘It must be an animal or something.’ He went around and it was a three-month-old baby.” They eventually adopted the baby boy, naming him Robert Kevin. “His birthday is July 24, and three years later to the day, our biological son, Bill, was born,” Reid says. Four years after that, the couple adopted a baby girl named Kori, from Korea. By that time, the Salvation Army had transferred the family to New York, followed by Pittsburgh. “Then we decided to leave the work,” says Reid. “I sensed things were starting to change, and I could never put my finger on it.” They moved back to Rochester, where she went to work for the manager of a local ABC television affiliate, and where, after 17 years, the marriage came to an end. Until his death in 1996, however, Louise and Bob remained friends. “He was very philosophical—I learned a lot of lessons from him,” she says.

Following her divorce, Louise channeled her energy into her family and career. She spent 22 years with United Technologies Corporation in Connecticut, serving in various capacities, including manager of stockholder relations and administrator to the board of directors. When she retired at 64, it didn’t take long to decide where she would live—Old Orchard Beach—or for her to return to work. Even though she had been out of the Salvation Army for years, the divisional commander learned she was in Maine and asked her to join him in the Portland office. Eighteen months later, the organization approached Reid with a major project: supervising the building of the Seaside Pavilion on the old camp meeting grounds in Old Orchard Beach. “I said, ‘Yes, I would love it, but I want a five-year contract,’” Reid recalls. “And he said, ‘We don’t do contracts in the army.’ After a few pleasantries, she hung up, and the next day she got another call. Her contract was in the mail. Although Reid got the 1,435-seat pavilion successfully up and running, her experience in the corporate world had changed her outlook. “The army people are good people, praying people, but I’m kind of a rebel,” she says. When her contract was up, she had another job waiting for her, assistant to the mayor and city administrator of Saco. Eight months later, over breakfast at the Black Point Inn, the then–town manager of Old Orchard Beach floated an idea. “He said, ‘Well, we’ve never had an assistant town manager of Old Orchard, and I’d like to offer you the job.’ So that’s how I got here.”

Having served Old Orchard Beach with competence and cheer, Reid is both respected and beloved. For her 80th birthday, she was feted with a parade of municipal vehicles, sitting in the passenger seat of the lead police cruiser wearing a big smile and a tiara. Outside of work, she leads a quiet life, reading and watching television in the company of her chihuahua, named Little Handsome. “I always believed, and I still do, that there was a plan for my life, and that every time a door would open it was the right one. And that if it slammed in my face, it was supposed to,” she says. “For most of my life it’s just been one door opening after another.” 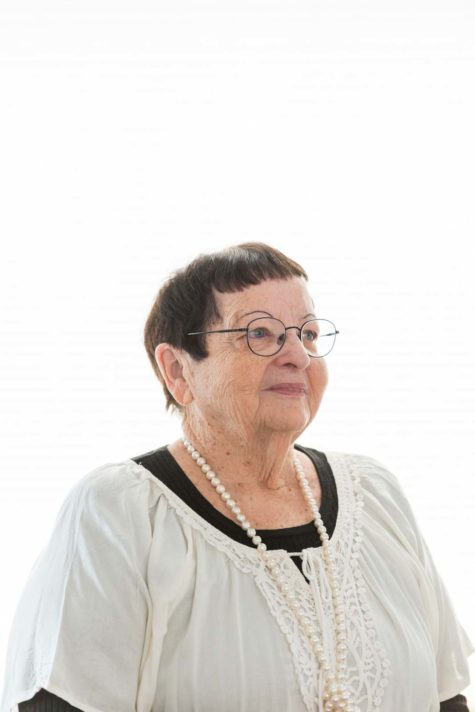 V. Louise Reid has served under six town managers during her 14 years in Old Orchard Beach. 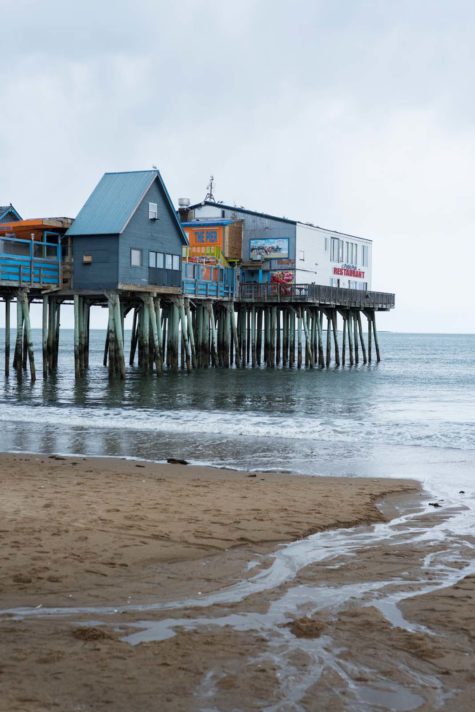 The iconic pier on Old Orchard Beach will soon be crowded with summer visitors. 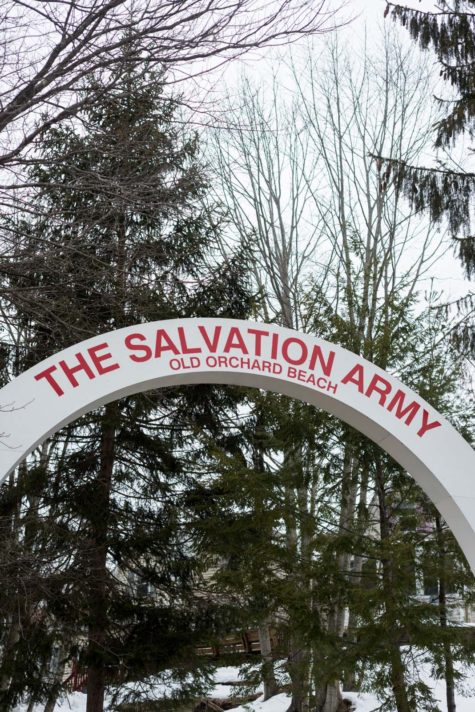 The entrance to the Seaside Pavilion, whose construction Reid managed for the Salvation Army.