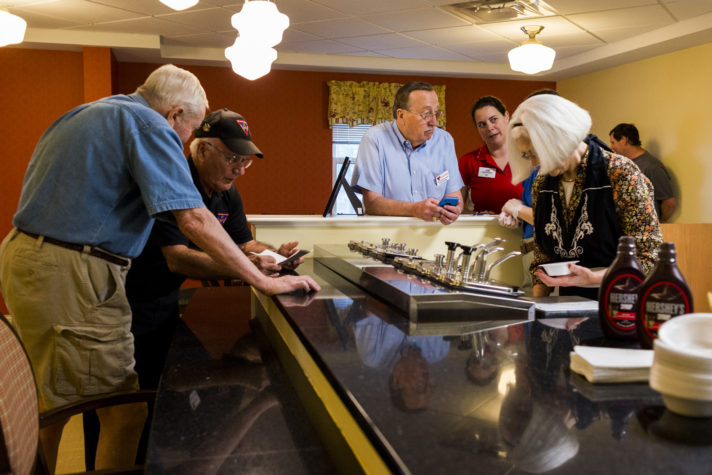 Honor Flight Maine arranges special trips for older veterans to visit the war memorials in Washington, D.C. Patch (third from left) at Coastal Landing/Coastal Shores, a retirement home and assisted living community on the grounds of the old Brunswick Naval Air Station. As commander of the Veteran Resource Center, also located on the old base, Patch helps host monthly ice cream socials for veterans and other residents. 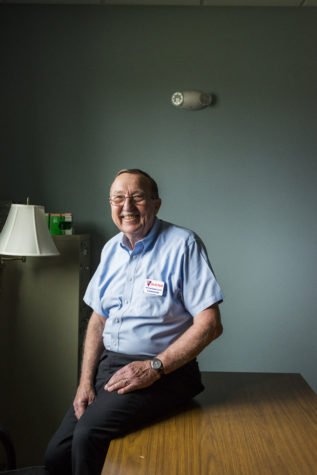 Following 17 years in the U.S. Navy and a subsequent career in defense contracting, David Patch retired to Maine, where he has devoted his time and considerable energy to support veterans. Through Maine Adaptive Sports and Recreation, he also helps Mainers with physical disabilities learn to ski, bike, and kayak. 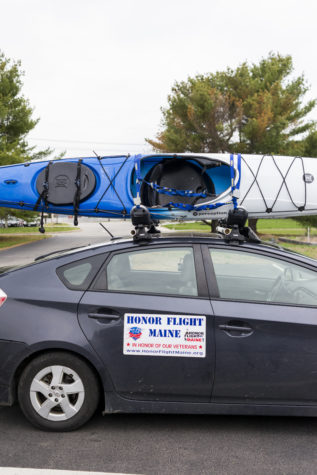 Patch’s car displays two of his passions: kayaking and serving as a board member for Honor Flight Maine. 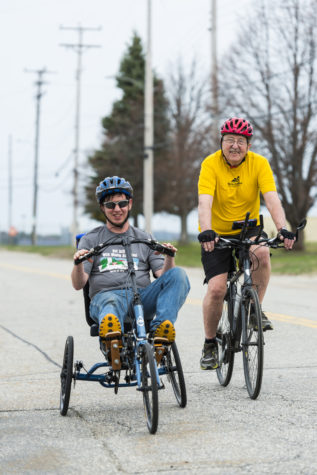 Patch goes for a bike ride with Ty Laroche, a 39-year-old with cerebral palsy whom Patch taught to ski and kayak.

One October day in 2012, David Patch was driving south on Route 1 in Nobleboro, returning to his home in Boothbay Harbor after a kayaking trip farther up the coast. A sign caught his eye, one that he had passed many times before, pointing the way to Camp Kieve. This time, his curiosity nudged him to turn off the highway, figuring the camp would be deserted and he could have a look around. But pulling into the parking area, he found it full of cars. In the administration building, Patch introduced himself to camp director Henry Kennedy and his father, Dick Kennedy. They explained that the camp was active year-round, hosting various groups including a Veterans Camp, prompted by an encounter the elder Kennedy had with a group of soldiers who said they were more nervous about being home than they were on duty in Iraq. “The military guys can come with their families and spend a week for free on the lake,” says Patch, who knew immediately he wanted to volunteer. “I said, ‘Sign me up.’”

A retired U.S. Navy Commander who served his country for 25 years, including three tours in Vietnam, 73-year-old Patch is still on a mission—to serve his fellow veterans in Maine. He is involved on multiple levels, providing physical, psychological, and administrative support to both older veterans and those who served in more recent conflicts. In addition to volunteering at what is now Kieve–Wavus Veterans Camp, Patch is commander of American Legion Post 36, the Veterans’ Resource Center, and the Mid-Coast Veterans Council; serves on several boards, including those of Maine Adaptive Sports and Recreation and Honor Flight Maine; and is a hospice volunteer at the Togus VA Medical Center. He is is on Congresswoman Chellie Pingree’s committee to interview candidates for the service academies and, as a member of the American Legion Legislative Committee in Maine, works with congressional staff on various veterans’ issues, such as streamlining the process for military personnel leaving active duty to be enrolled in the VA system.

Through his efforts at Kieve–Wavus, Patch learned about Veterans No Boundaries, a program of Maine Adaptive Sports and Recreation. He signed on to volunteer with disabled veterans and their families, teaching them to ski during winter trips to Sunday River and to participate in other sports on summer trips to Camp Wavus. “Once I got involved with Maine Adaptive and saw other people with disabilities and the incredible difference it makes being able to learn how to do these sports, I said, ‘I’ve got to be a part of that,’” says Patch. He now also volunteers to help disabled, nonmilitary Mainers ride bikes and paddle kayaks. At 70, he became a Registered Maine Guide and has been trained in adaptive kayaking. “I decided that if I’m going to be out there with people with disabilities kayaking, even though I’m a recreational kayaker I ought to learn more about what I’m doing,” Patch says.

Love of the water is what attracted Patch to the Navy. “We grew up spending summers on Cape Cod, and my dad taught me to sail before I could walk,” he says. In his early teens, he joined the Sea Scouts, a division of the Boy Scouts, but ended up spending so much time on boats that his academics suffered. After all four colleges he applied to rejected him, he enlisted in the Navy Reserves. His father arranged for him to do a post-graduate year at a military prep school in Washington, D.C., and Patch reapplied to the four colleges, plus the Naval Academy. “When the acceptance letters came in, I was off on a cruise with the Navy, and my dad decided I was going to the Academy,” Patch recalls with a chuckle. Determined to be a fighter pilot, he went to flight school after graduation, but after two years of flying high-performance jets had to quit due to an inner ear problem. Discouraged, he took a post on a ship expecting to get out of the Navy as soon as he could. “My background should have indicated that I would be pretty comfortable onboard ships, and I was,” Patch says.

“I ended up going first onto mine sweepers, then destroyers and a series of ships for the next 17 years and I loved it.”

In Vietnam, his job was to guide naval gunfire support to the soldiers onshore. “The folks in country would find targets; I’d then go either in a helicopter or on foot to where those targets were and call the coordinates into the ships to bring the gunfire,” he says. “For a young guy trained to do that sort of stuff, it was exhilarating.” Patch became an executive officer on a destroyer and ultimately was sent to the Pentagon. “I used to say I was in charge of all the ships the Navy did not want,” experimental vessels such as hydrofoils and surface-effect ships. This led to an interest in high-end technology for naval applications, and “part of that was to get involved with stealth technology that was in those days considered a black art and super secret,” he says. After retiring from the Pentagon in 1986, Patch embarked on a career in defense contracting, which took him and his family from Washington, D.C. to upstate New York, New Jersey, and Colorado. His parents retired to Boothbay Harbor, and in 1996, his mother’s Alzheimers prompted Patch and his wife, Mary, to join them in Maine. He maintained his connection to both the Navy and the world of high tech, eventually becoming president of two separate companies that developed technology for the first Zumwalt-class destroyer, launched in the fall of 2013 from Bath Iron Works. “When they turn on the lights on the Zumwalt at night, the lights you see are mine—that’s kind of cool,” he says. “We developed the optics to display it so the light source is inside, meaning that there’s no heat signature on the surface of the ship.”

Patch is well aware that his own career in the military was markedly different from many of the veterans he works with today. “When I was in-country Vietnam, I was not going face-to-face with the bad guy,” he says. Yet while he was on active duty, Mary was raising their children on her own. “I was home for the birth of all three, fortunately, but with all of them, I missed their first year,” Patch says. “Even when not involved on combat deployments, you are away for 12 months at a time. These separations, combat or otherwise, stress families.”

Although his own marriage survived his time in the service, Patch’s familiarity with the many pitfalls facing military families is a large part of what drives his efforts to support veterans. A few years ago, realizing he needed to understand how the VA works, he drove up to Togus, only to be frustrated because it wasn’t obvious how a veteran was to learn about the agency and what services could be available. “That’s how I ended up on the Maine Veterans Coordinating Committee,” he says. “Once a month we meet with the representatives of our congressional delegation and veteran service organization leaders from the VA.” His interest in what was going on at the state legislature to benefit veterans prompted him to join the American Legion, on whose behalf he wrote a paper to the delegation three years ago, decrying the downsizing of the military while the number of missions were going up. “Any time you go into combat, you’re going to come back affected,” Patch says. “We’re sending these people over there four, five, or six times and we wonder why they’re screwed up. It’s criminal.” Another of his political missions has been to improve access to the VA. “Why do we have to go through the process of filling out a claim to determine that a soldier, sailor, Marine, has a disability when he left the service with that disability?” While his efforts have contributed to positive change—the downsizing trend is reversing, and the VA application process has been streamlined—Patch is reluctant to take any credit. “There are many like me out there,” he says. “Maine Adaptive has 300 to 400 volunteers, and a good many of them are veterans. The therapy for a lot of us is just what we’re doing—giving back to our brothers and sisters of service.”