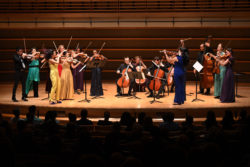 Welcome to the 2022 summer season! Luxuriate in the East Coast Chamber Orchestra’s glorious sound-world with Strauss’s lovely String Sextet from Capriccio, three poignant pieces by Clara Schumann, and a kaleidoscopic work by Michi Wiancko that celebrates the vitality and resilience of the natural world, performed by the ensemble-within-an-ensemble Jupiter String Quartet. Finally, Schubert’s “Death and the Maiden,” a pillar of the chamber music repertoire, builds a dialogue between sinister, subversive power and a dreamy, expressive lyricism in Mahler’s arrangement for string orchestra.

The original source of Schubert’s fun-loving ‘Trout’ quintet was a song warning young women against being ‘caught’ by ‘angling’ men, but for the piano quintet version he concentrates on the colorful imagery of a trout in its natural habitat. Jessie Montgomery’s Banner “daringly transforms the [national] anthem, folding it into a teeming score…to create a musical melting pot” (New York Times), and features the ensemble-within-an-ensemble Jupiter String Quartet. The East Coast Chamber Orchestra brings its residency to a high-spirited finale with Tchaikovsky’s heartfelt Serenade for Strings, one of the most definitive and popular works from the late Romantic era, infused with grace, exuberance, and sheer joy.

A gentle serenity and sublime slowness infuses a single-movement nocturne by Schubert; the calm before the storm which is Schoenberg’s “stand against tyranny” for piano, reciter, and string quartet. Ode to Napoleon, based on a poem by Lord Byron, references “La Marseillaise” (France’s national anthem) and Beethoven’s Fifth Symphony to yield a forcefully dramatic expression of resistance in the World War II era. The evening comes to a glorious close with the absolutely gorgeous clarinet quintet by Brahms, one of his final works, written during an unexpected re-emergence from retirement inspired by hearing the virtuoso clarinetist, Richard Mühlfeld. 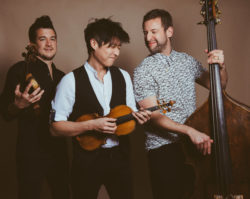 Bonded by an uncommon blend of instruments and vocals, Charles Yang (violin), Nick Kendall (violin), and Ranaan Meyer (double bass), have found a unique voice of expression. To experience Time For Three live is to hear the various eras, styles, and traditions of Western music fold in on themselves and emerge anew. The Portland Chamber Music Festival is thrilled to present Time For Three in their solo Portland debut performance.

Remember is a brief elegy to the composer Eleanor Alberga’s mother, into which she poignantly weaves a Jamaican folk song. Samuel Barber’s Dover Beach, a marvel of lyricism and masterful craftsmanship, uses rich imagery to take on the emotional weight and nuance of a world at war. Schubert’s lighthearted Fantasie, an exception to the darkness that haunts many of the late works written in his all-too-short life, showcases his divine melodic gifts with sparkling, stunning virtuosity. The epic season finale is Robert Schumann’s piano quintet, noted for its exuberant character (his wife Clara, the virtuoso pianist for whom it was written, declared it “splendid, full of vigor and freshness”) and expansive, triumphant musicality.