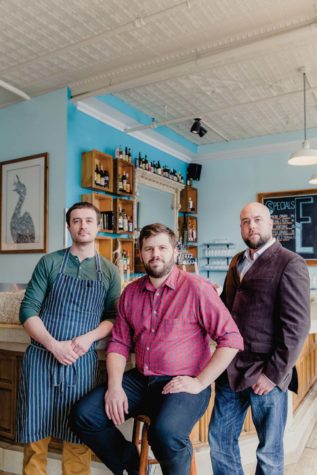 Arlin Smith, Andrew Taylor, and Mike Wiley’s 2012 purchase of Hugo’s restaurant set the stage for what is now a block-long epicurean empire on Portland’s Middle Street. Soon after buying the fine dining institution from chef Rob Evans and his wife, Nancy Pugh, the trio opened Eventide Oyster Co. next door, to immediate acclaim. Last year they opened the Honey Paw, a noodle-focused restaurant that avoids fitting in any culinary category. “We are all just really passionate about creating wonderful experiences for other people,” Taylor says. “Nothing makes me happier than watching someone else enjoying their meal at one of our restaurants.” The three establishments have picked up numerous accolades, particularly Eventide, which netted Taylor and Wiley two James Beard Award nominations for Best Chef in the Northeast in 2015 and 2016. Their restaurant group, Big Tree Hospitality, now employs over 120 people and has created a community of workers that they say is one of their proudest achievements. The trio also contributes to charitable causes, including Share Our Strength, which is working to end childhood hunger, and its affiliated Cooking Matters program, which helps families prepare healthy, affordable meals. “Through these programs we hope to help make a significant impact on an issue that affects so many people in our community: hunger,” Smith says.