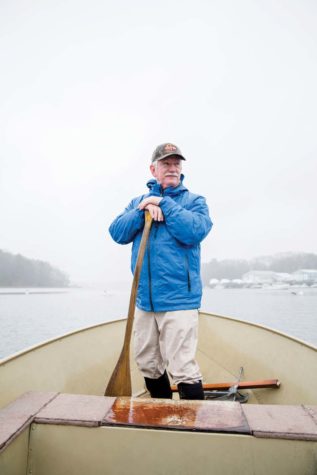 While growing up in the Bangor area, Bill Green had an inferiority complex about being from Maine. “As I matured, I realized that this is a truly remarkable place to live and raise a family,” he says. Now, Green promotes the state every Saturday evening on his television show, Bill Green’s Maine. Green’s show often covers the outdoors and recreational sports, but it also highlights other topics and individuals from all around the state, including profiles on notable business and cultural leaders and historic landmarks. “I try to make Saturday night at 7 p.m. a time when anyone and maybe even a family can sit down, be entertained, and come away feeling good about the place we live,” he says. Green launched the show in 2000 and has recorded close to 400 episodes. Last year, the show won a Regional Emmy for Best Light Feature and a Regional Edward R. Murrow Award for Best Feature. Green has been inducted into both the Maine Sports Hall of Fame and Maine Association of Broadcasters Hall of Fame. “Working on my show has caused me to love Maine even more,” Green says. “I find it fulfilling to be cold, wet, and/or muddy. It amuses me when we’ll go out and do something on a cold day in a clam flat and people will come up to me and say, ‘You have the best job in Maine.’”