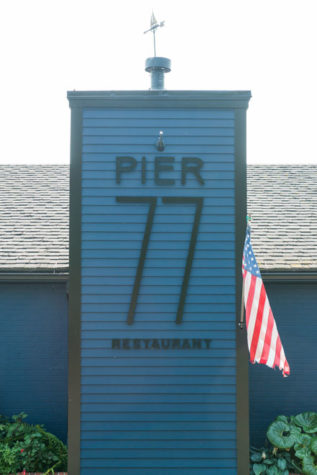 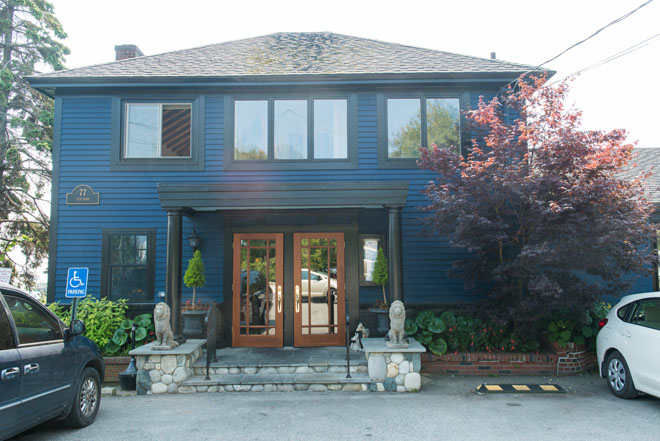 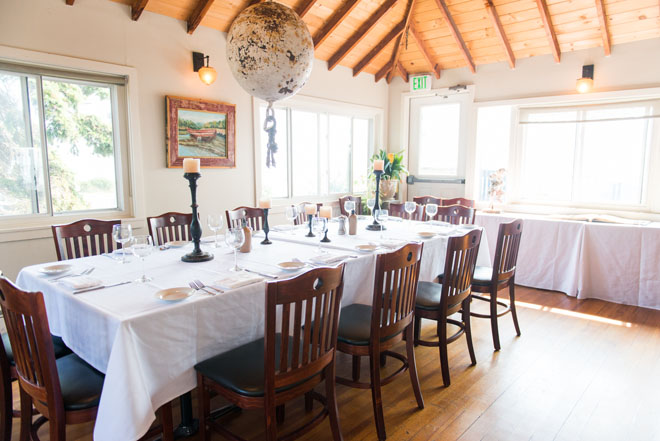 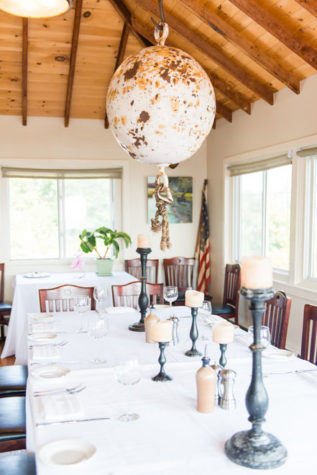 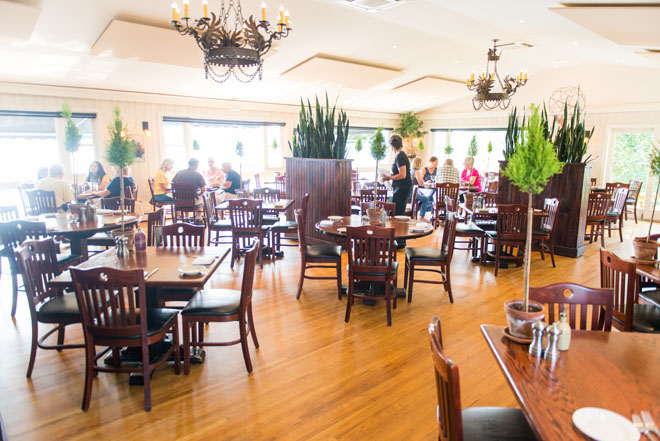 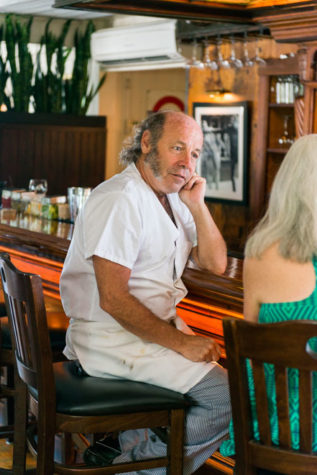 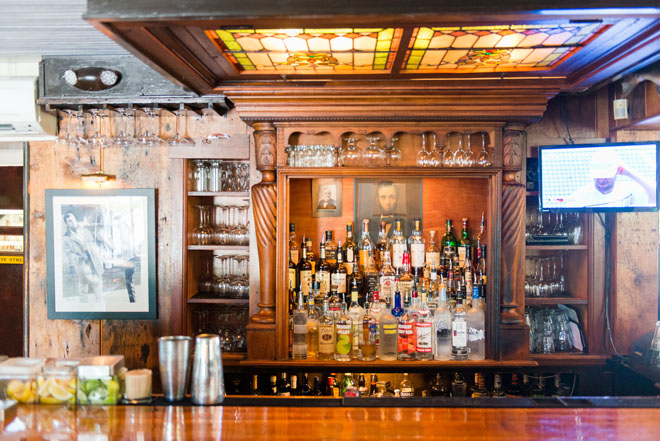 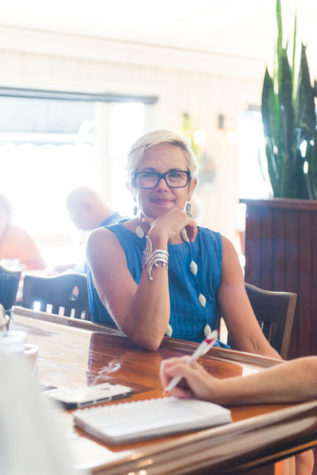 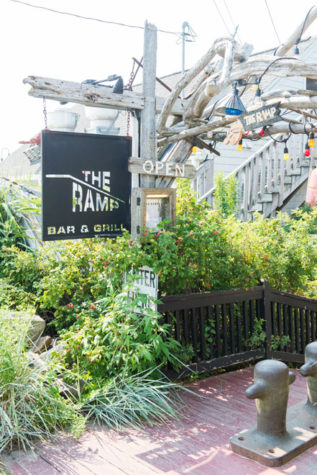 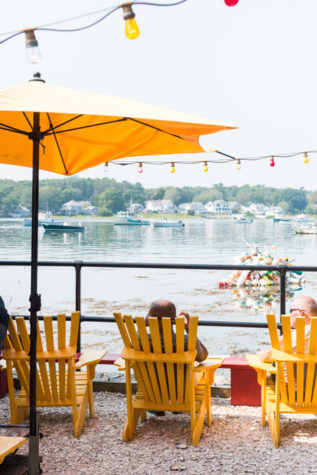 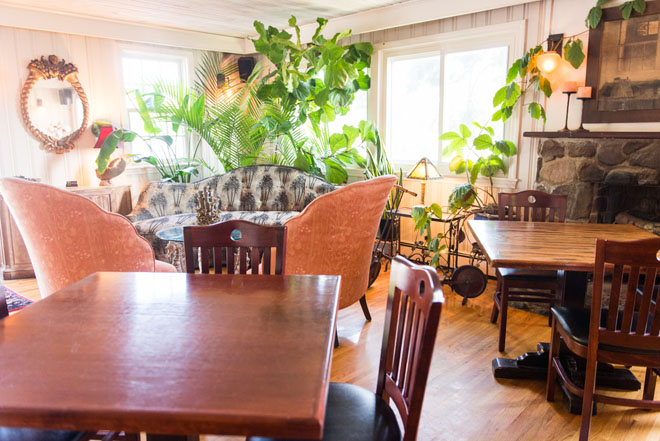 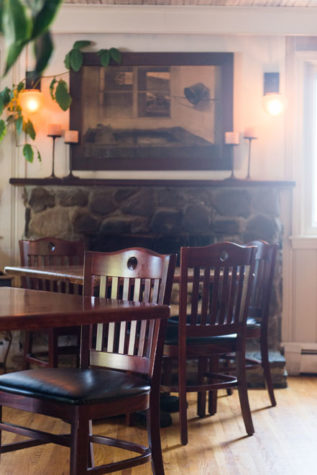 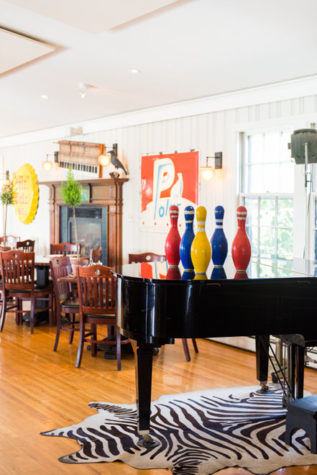 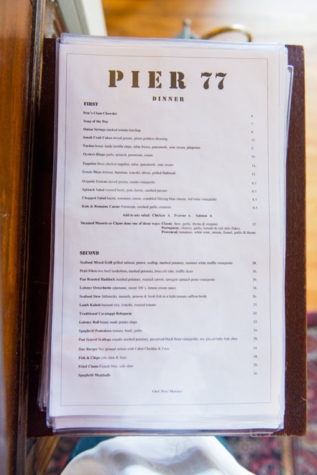 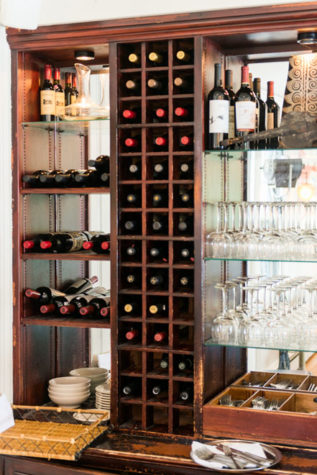 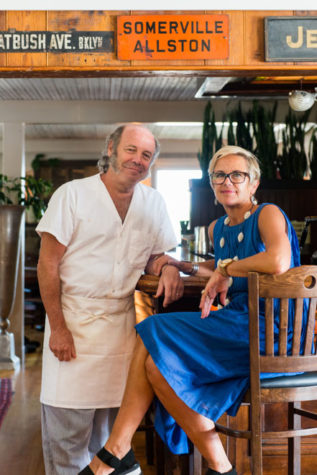 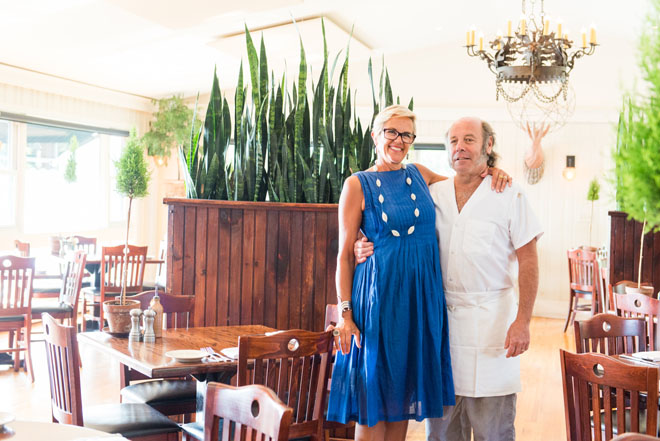 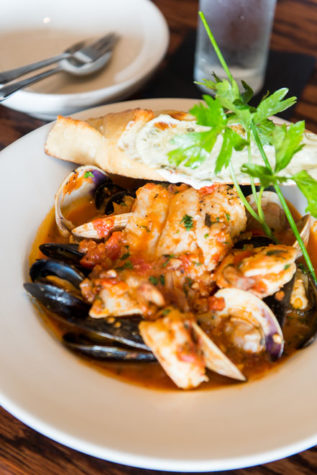 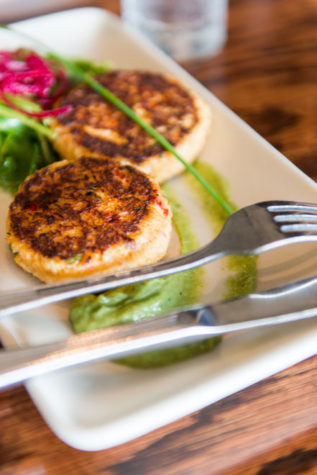 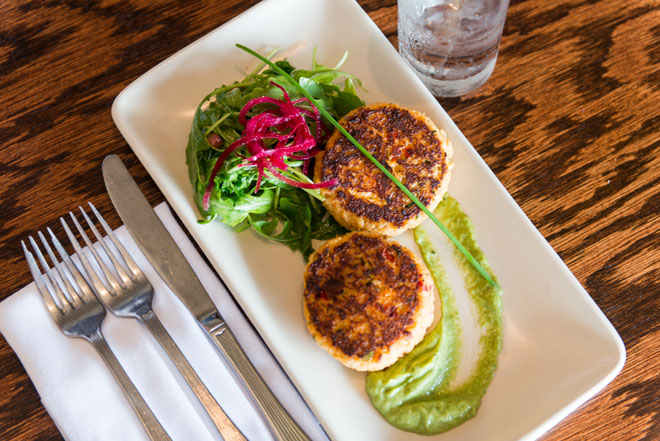 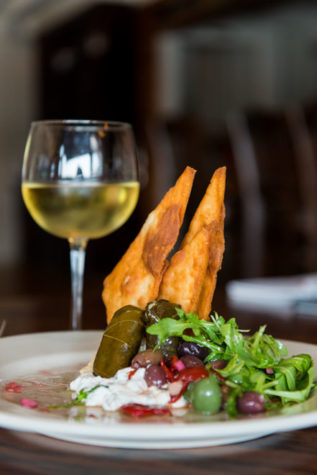 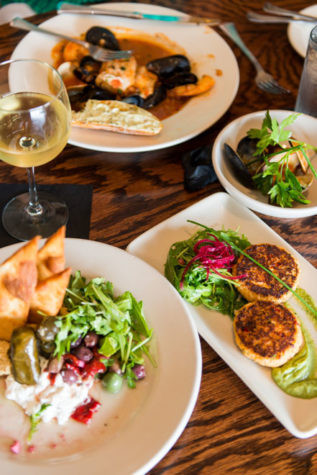 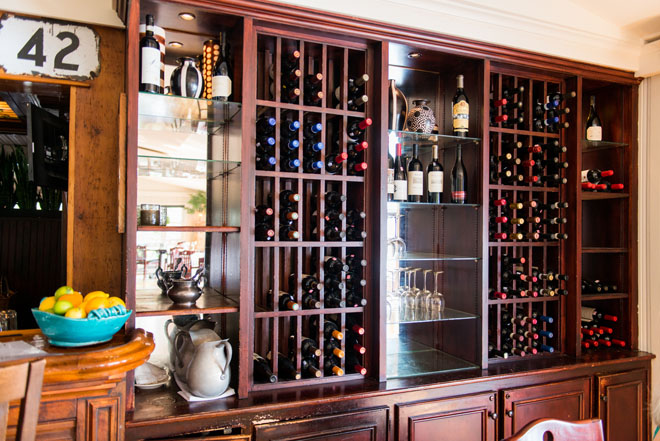 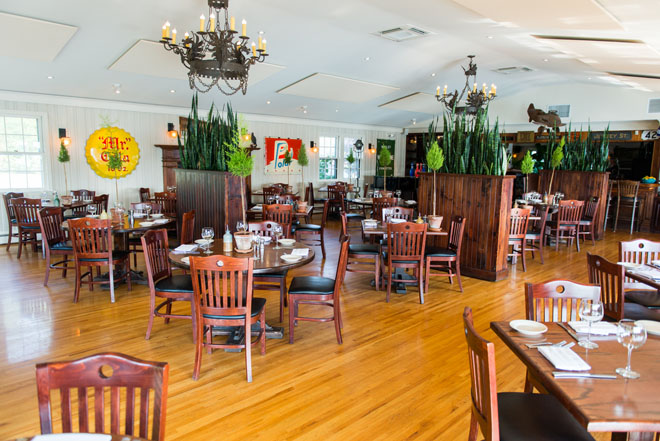 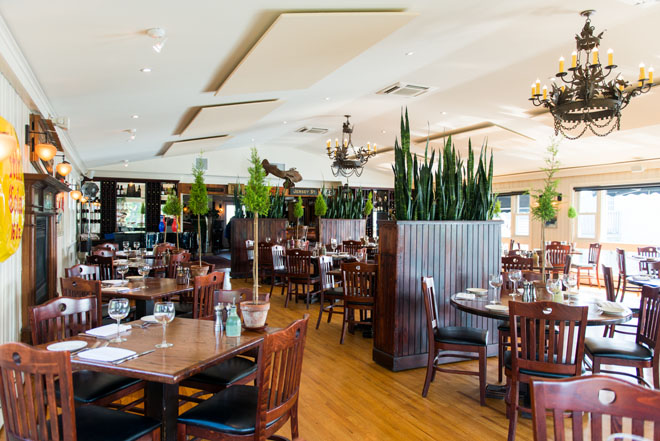 Even as fall is closing in, it’s a hot day as I head to Cape Porpoise for lunch at Pier 77. The restaurant is at the end of a scenic road lined with neat New England style homes. Pier 77 sits smack on the harbor, where there’s a cooling breeze to ease the sticky air. The views from outside and inside the restaurant are quintessential Maine. Lobster boats and dinghies, buoys and the rocky coastline all vie for your attention.

Owners Kate and Pete Morency landed in this idyllic spot 13 years ago, when they got a call from Pete’s sister, Jaye, who lives in York. “I have a place for you,” she said. They flew out from San Francisco, where they had been living and working, on a bitterly cold January day. On the way back to California the next day, they asked each other, “Are we really going to do this?” and of course the answer was yes. There were days during the extensive renovation that made them question that decision, but ultimately they created a stylish and beautiful spot that attracts both tourists and locals. “The previous restaurant in this space was formal and people would get dressed up to come here,” Kate tells me. They’ve definitely lightened up the atmosphere, bringing their casual California vibe to the space. It’s airy and attractive, with a dark wood bar and white paneled walls. Vintage tin signs and advertisements add a splash of color to the walls. Tall topiaries placed on tabletops are a welcome change from the usual flowers. Big picture windows keep the place light and let in that priceless view.

Morency has been working in kitchens for more than 43 years. He attended the Culinary Institute of America back in the early 1970s before being a chef was the cool thing to do. Pete worked his way up from his first cooking job at a restaurant in Provincetown to several high-end hotels in the San Francisco area, where he met Kate. He still enjoys being on the line with his sous chefs, turning out uncomplicated but flavorful food. The menu is “what I like to eat,” he says simply.

“Pete builds the dish from the bottom up,” Kate explains. “The base has been his sauces, but he’s moving more towards lighter vinaigrettes now.” The Greek meze starter is an excellent example of this. Every component is made in-house—the refreshing tzatziki, lemony hummus, stuffed grape leaves, and crisp pita. Underneath it all is a light shallot vinaigrette, that is just the right thing to bring all the elements of the plate together. Another starter of crab cakes is presented with an herby green goddess dressing. The taste is all fresh crab, just the way it should be.

Seafood stew is a menu item that’s available year-round. Morency builds the rich tomato broth slowly, starting with sautéed onion, garlic, and fennel. White wine, vegetable stock, and saffron add depth. The bowl is filled with a generous haddock fillet, shrimp, mussels, and sweet littleneck clams. Thankfully, there’s a big slice of grilled bread spread with basil aioli, that I can use to soak up that exquisite broth.

Kate Morency creates the wine list for Pier 77. Having grown up in northern California, the list is heavy on wines from that state. It wasn’t until she arrived in New England that she learned an appreciation for the wines of Italy and France that are now a part of the list as well. “The wine list changes all the time,” she says. “I like it to be friendly and accessible, so people can order a bottle without feeling like they’re breaking the bank.”

It’s a gorgeous late summer day now and there’s a well-dressed crowd relaxing in the dining room, but I wonder what it’s like in the off-season. “Oh that’s when the locals come back,” says Kate. “They’ll show up here or next door at the Ramp (which the Morencys, along with Pete’s sister Jaye, also own) in a snow storm and we take them in and feed them.” I have to admit this sounds pretty appealing, as I head back out into the steamy afternoon.