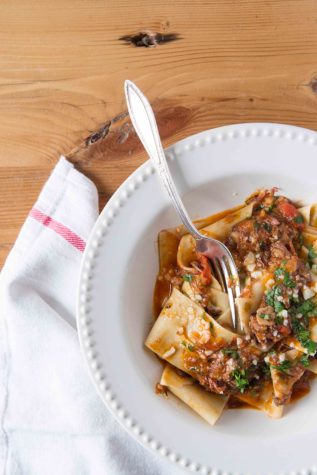 Pasta in almost any form is comfort food of the highest order. While good-quality dried pasta is often preferred, even in Italy, for dishes such as linguine con le vongole (spaghetti with clams) and spaghetti carbonara, fresh, handmade pasta elevates even the simplest of sauces. At the following restaurants, making pasta is an art form.

A neighbor in Tuscany taught acclaimed chef Sara Jenkins how to make pasta when she was a child. Her New York City restaurant, Porsena, specializes in handmade pasta, and if you stop by her Maine restaurant before service, you’ll likely find her kneading pasta dough at the counter in the open kitchen. The menu changes according to seasonal availability, but the pappardelle with short-rib ragu is a recurring favorite.

At this Rockland hotspot, chef Siddharta Rumma, a native of Rome, turns out handmade pasta daily for authentic dishes such as spaghetti alla carbonara, made with guanciale and duck egg. Another dish, Ada’s Pasta—bucatini with lemon, butter, herbs, and cured egg yolk—can be gilded with caviar, and several of the pasta dishes are available in a family size that serves four.

While it may not be part of Portland’s trendy restaurant scene, Bruno’s is a bastion of noteworthy Italian American cooking. The first dish on the list of pasta offerings, ravioli verde, deserves its top billing. Perfectly cooked pillows of thinly rolled spinach pasta are filled with delicately seasoned ricotta and served with light tomato cream sauce or sage butter. Bruno’s ravioli is also available frozen at many local markets.

It’s all about handmade pasta at Paciarino, which was opened on the edge of the Old Port in 2008 by Milan natives Fabiana de Savino and Enrico Barbiero. In their cheerful, cozy dining room, they serve traditional dishes and Milanese specialties such as fusilli al ragu di tonno (fusilli and red sauce and tuna). The restaurant also offers frozen pasta and sauces to take home.

The menus at these sister restaurants both feature a section of handmade pasta dishes, but they are not identical. At the slightly more formal Boothbay Harbor location, a signature dish is the chitarrucci neri ai frutti di mare (squid-ink spaghetti with seafood in a light tomato sauce), while in Kennebunk, chef and co-owner German Lucarelli’s offerings include fettuccine with meatballs and rigatoni Bolognese.

At her flagship restaurant, two-time James Beard Award–winning chef Melissa Kelly operates what she calls a “full-circle kitchen,” where pigs and chickens roam freely near lush gardens that provide much of the produce. Her handmade pasta offerings include rigatoni alla Napoletana—beef neck and shoulder braised with San Marzano tomatoes—and porcini and cocoa tagliatelle, which is sauced with wild mushroom and black garlic stroganoff.

A native of Genoa, chef-owner Paolo Laboa has garnered justifiable acclaim for his mandilli al vero pesto Genovese, ethereal ribbons of handmade “handkerchief” pasta with the basil pesto that won the World Pesto Championship in his hometown in 2008. All of his pasta is handmade daily, including the sheets for a traditional lasagna.