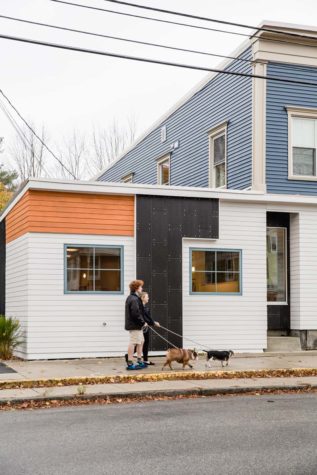 Once a hardware, now a home: Hewitt chose orange to decorate the front of his new abode. He also purchased a matching orange mailbox (not pictured). 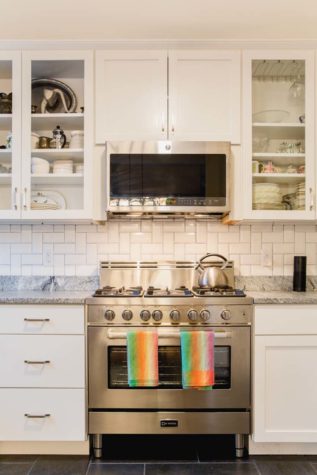 A contemporary kitchen with modern amenities. 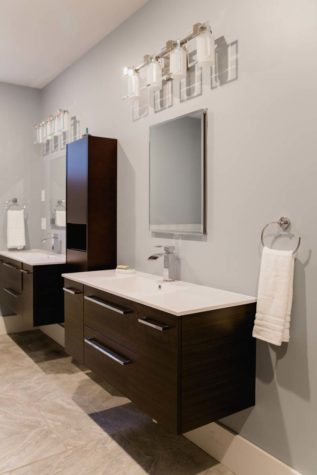 Lighting fixtures from House of Lights in Scarborough provide sleek style in the bathroom. 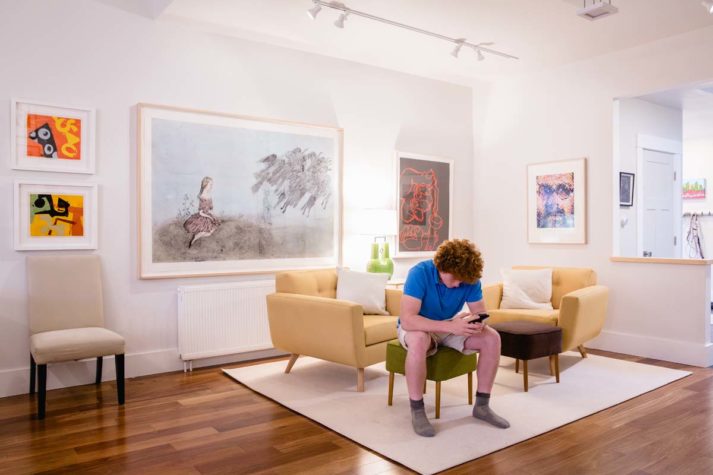 Max reads, surrounded by art, from left to right: woodblocks by Hewitt, painting by Kiki Smith, woodblock by Hewitt, and self portrait by Chuck Close. 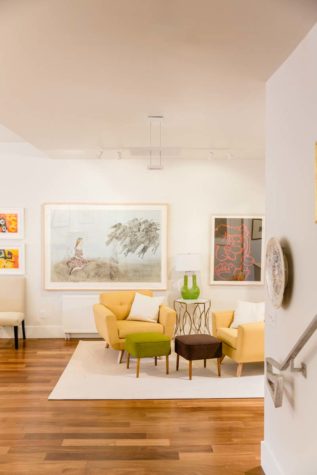 Charlie Hewitt and Kate Carey purchased the Goff’s Hardware building from Butch Goff. “He was wonderful to deal with,” Carey recalls. They renovated the space to create a unique, thoughtful home for their family of four.

Artists Charlie Hewitt and Kate Carey have transformed an old hardware store in Yarmouth into an open, airy space where they can enjoy (and create) works of art.

“We built this place for our art collection,” says artist Charlie Hewitt. We’re standing in his Yarmouth home, a renovated hardware store with large windows that overlook Main Street and fill the living room with light. The layout of the room feels familiar, but only because I visit a lot of art galleries. There are walls that exist solely to hold art. They divide the room and provide wall space for a dramatic woodcut by Alison Saar or a subtly toned oil painting by Ralph Blakelock. “He lived for a time in a Bellevue insane asylum,” Hewitt explains as he takes the gold-framed piece down from the wall for me to examine.

Nearby in the kitchen, Hewitt’s two children, Ruby, 12, and Max, 18, chat with their mom, Kate Carey, as they get ready for school. Aside from a short counter and a few steps leading down to the lower level, the kitchen flows unobstructed into the gallery-esque living room. Although this home is unconventional, and although I’m peppering their parents with breathless questions about this painting, that sculpture, the kids don’t seem to find anything strange at all. They live amongst art, and they always have.

Hewitt and Carey have been collecting art for years. Before moving to Maine nine years ago, the family lived in a loft in New York City, where they had “all kinds of space” to display the couple’s collection. Carey is also an artist—a sculptor and painter—and behind their home, in her large, barn-like studio, she works on abstract paintings, which feature muted whirlpools of color that drip down the canvas. Originally from the Midwest, Carey has also worked as an electrician and a carpenter, as well as at the New York Times. Unlike his wife, Hewitt was born in Maine— Lewiston, to be more precise. He views his home state as one of the few states in America that still have “authenticity and integrity.”

The couple’s decision to move from New York to Maine was spurred by a desire to be part of a smaller, more cohesive community. In addition to working as an artist, Hewitt is a real estate developer, and it was a combination of his professional interests and his personal desires that brought him home to Maine. “I came up for a show at the Farnsworth years ago, and I decided that it was time for my kids to have a hometown,” he explains. “We did it mostly for the kids, but real estate development is part of the deal.” Hewitt has worked on several large projects in Portland, including a 26-unit condo project on Congress Street.

The transition to Maine has worked out well for the family. Maine, Hewitt says, is a great place for collaborative artists. He’s worked on several documentaries with filmmakers in Lewiston, including a 27-minute piece on Mohammad Ali and a PBS documentary about the Somali community. He also responsible for a bright and playful sculpture on Lisbon Street in Lewiston, titled Lewiston/ Auburn Rattle, and a similar sculpture on Congress Street in Portland. Hewitt has also done a lot of collaborative work with master printer David Wolfe and fabricator Bob Menard. “I’ve had a great opportunity to work with all these talented and generous people in Maine,” he says. “Here, people are curious about what I’m doing. They aren’t competing with each other. Being in a subculture is the best thing in the world.”

When asked what made them choose Yarmouth for their new house—the couple previously lived in Portland’s West End— Carey answers quickly: “Schools, schools, schools.” Education is extremely important to the couple, as is the strong sense of community that exists in the coastal town. “It hasn’t been an adjustment at all,” Carey says of their move. “People here are wonderful. They are gentle and generous, and they love their kids. They commit to their schools. And they’re proud of the system.”

Even though they took over a “loved and valued hardware store,” in Carey’s words, the Yarmouth community has been happy to see the artists move in. “Maybe there should have been pushback,” says Hewitt, “but there was none. The fellow who sold it wanted to sell it. It was a shift. But I tried not to over-exaggerate the exterior. I wanted it to look cool, and to keep it mine.” Working with carpenters Peder Knoth and Mike Hanson, Hewitt and Carey plotted out a creative and bright living space that takes full advantage of the natural light with well-placed skylights and large windows. They worked with architect Dave Douglass AIA on the orginal plans. “Even though it’s big and spacious, it’s not drafty,” Carey says. “It’s well-insulated, and the brightness gives it a psychologically positive feel.”

“When we first bought the house,” Hewitt explains, “it was all closed off. We took out the walls and restructured it. It was caving in and sagging, with crumbled bay windows and counters.” They made sure the windows could provide plenty of northern light, which is more even and better for viewing their collection of photographs, prints, sculptures, and paintings.

“For the kids to just be around art, just to breathe it in, that feels like an achievement to me,” Hewitt adds. “I can give them the grace of being around art. They can experience how it affects you, your moods, in the daylight and at night. They’ll remember these pieces their whole lives as records of their youth.”

Experience the Fun & Magic of Theater Saturday Mornings at 10:30am, for ages 4-10 It’s a beautiful gift, but a surprisingly subtle one, given the striking nature of their quirky orange and brown-painted home. “We don’t talk about art that much,” Carey explains, “although the cardboard box by Robert Rauschenberg has been a topic of conversation.” Both Carey and Hewitt laugh as they tell me how Max likes to shock his friends with the piece, which looks (even to my art-loving eyes) like a few pieces of garbage pasted together.

Turns out, that’s exactly what it is. But it’s also more than that. “My son and his friends always say, ‘Gee, what is that thing?’ And I bought it for that reason. Because he said it was art, and it is,” Hewitt says as he leads me downstairs to stare at the assemblage piece. “I tell my son, ‘When you can do something, when you have this energy and this reaction, you will have created something real.’” It’s a daily reminder of the possibility and potential of art, delivered in cardboard, and hung on a kitchen wall. 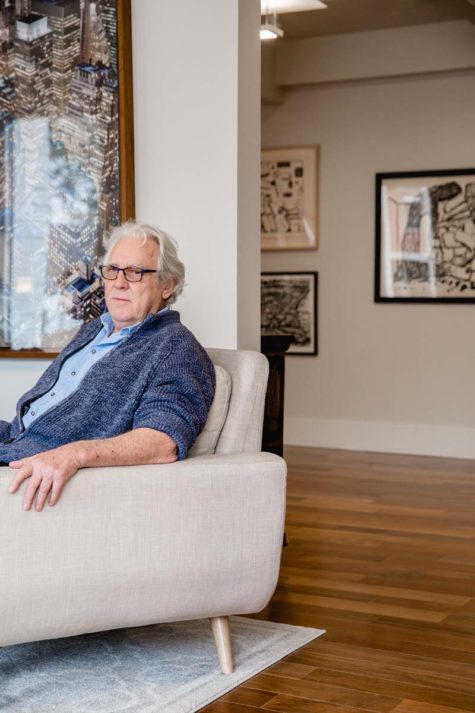 Behind Hewitt hangs an image of his former home, New York City, by photographer Scott Peterman. 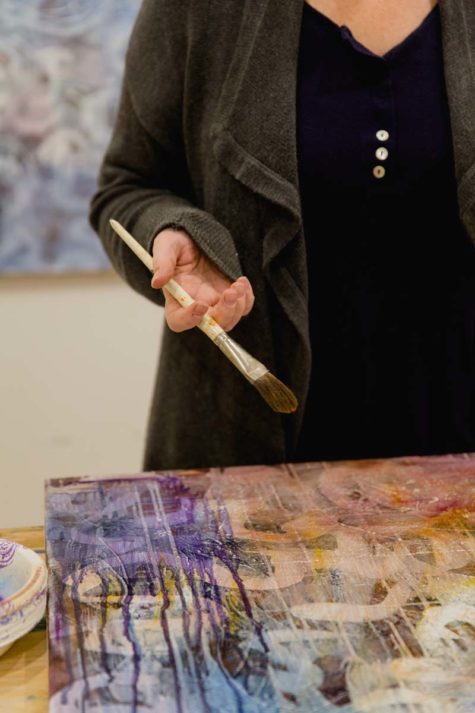 Carey at work in her studio 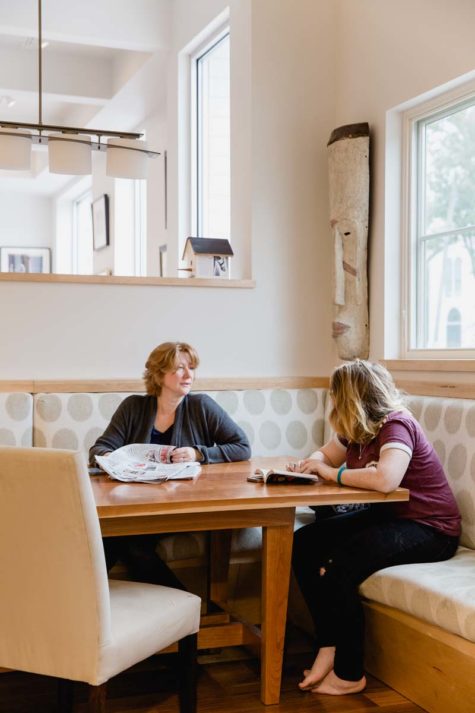 Carey sits at the kitchen table with her daughter Ruby.