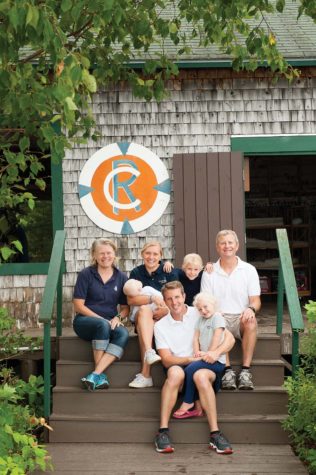 Camp Runoia director Pam Cobb and her family at the boathouse. From left: Cobb; her daughter Jai Cobb Kells and her husband Jesse Kells with their three children, Frannie, Molly, and Sawyer; Cobb’s husband Mark Heuberger. 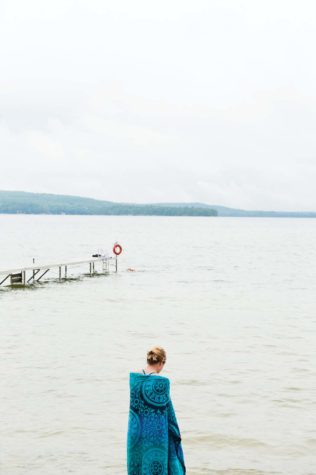 Runoia alumnus rests at the edge of Great Pond after the Oak Island Swim, an event during alumnae weekend that raises money for the Betty Cobb Campership Fund. 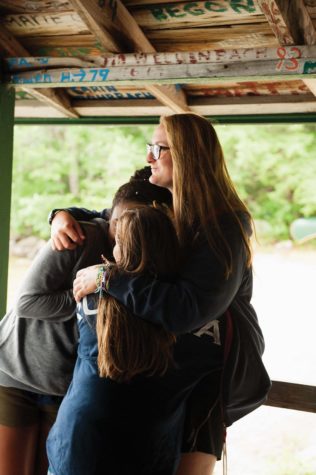 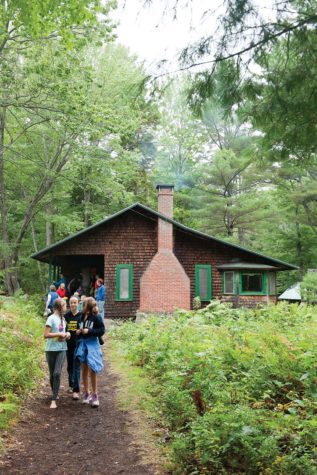 The Lodge is Runoia’s meeting place, performance space, and library. 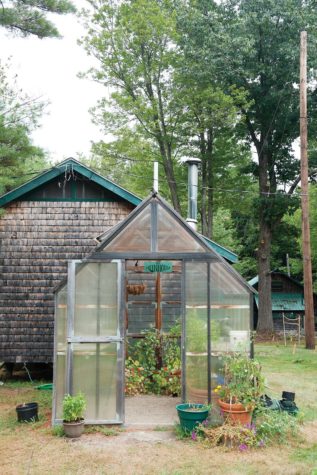 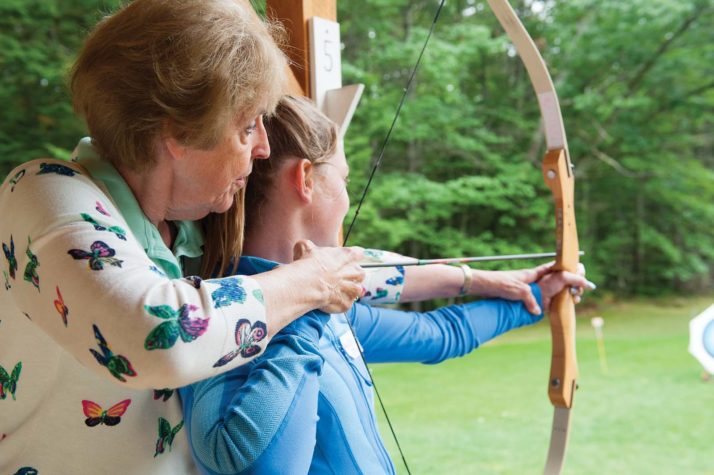 In the archery shed, Runoia alum Jan Leader Ahern shows her granddaughter, Shelley O’Brien, how to hold a bow. 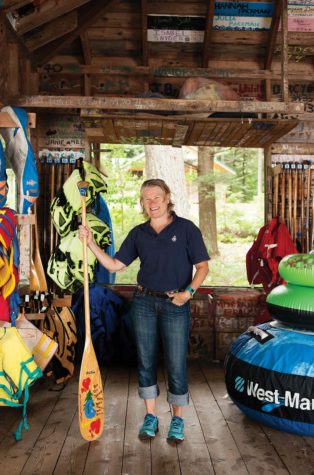 Pam Cobb in the boathouse, where girls in the last year of camp sign their names on the board walls and ceiling. 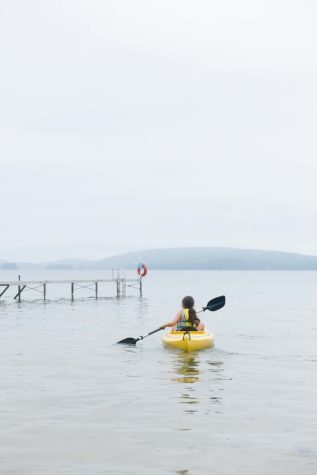 A camper kayaks out in Great Pond. 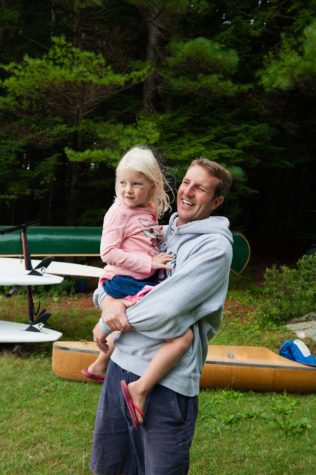 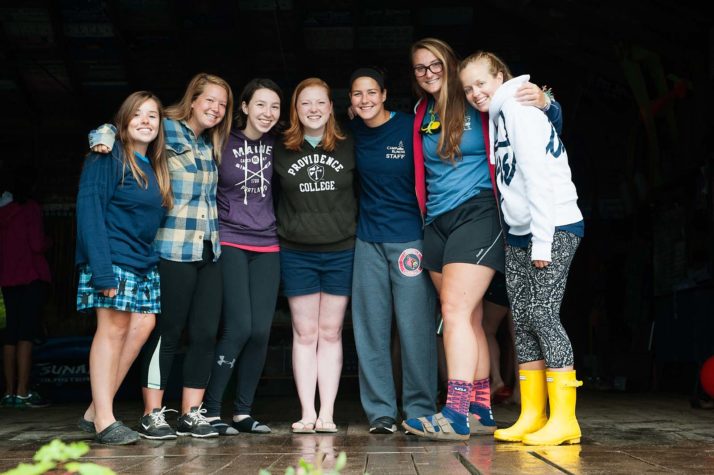 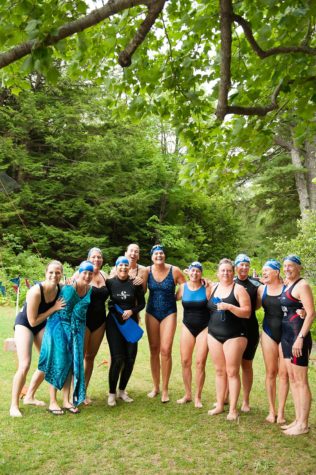 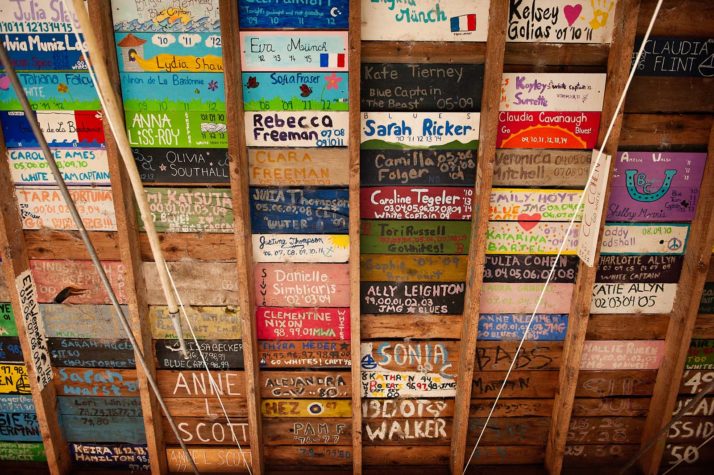 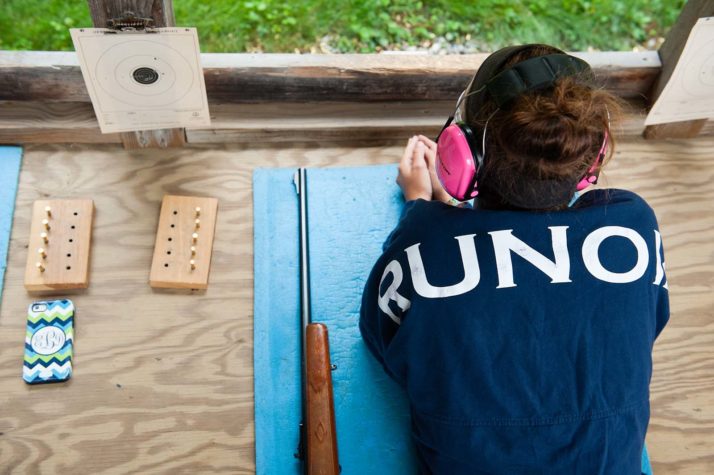 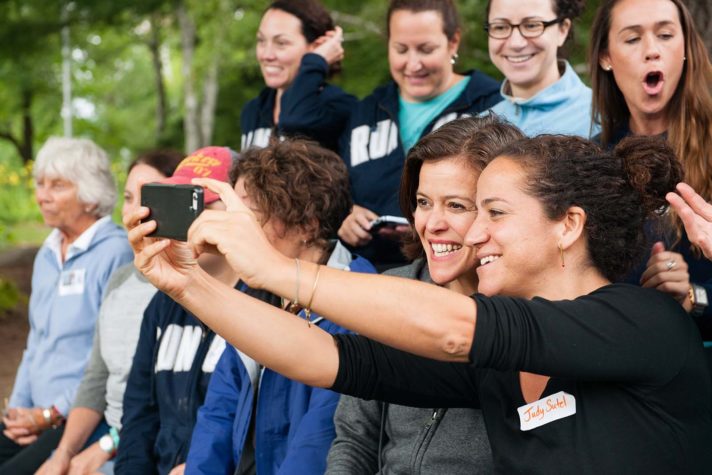 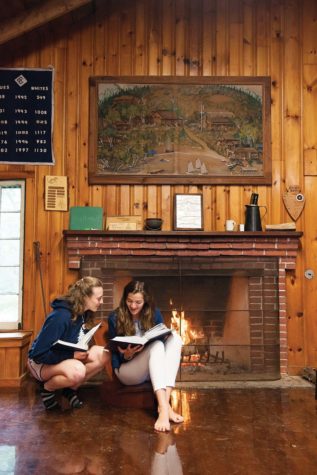 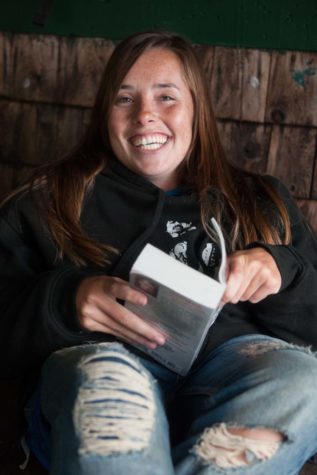 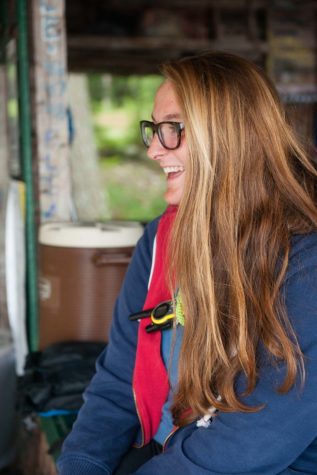 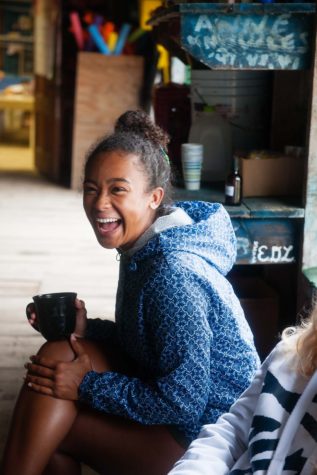 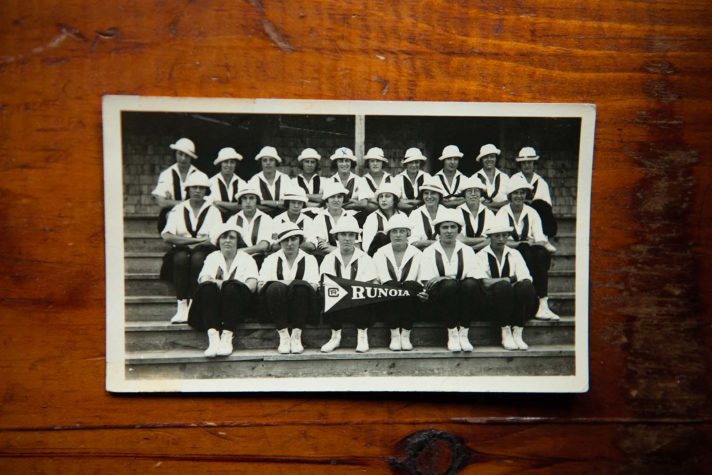 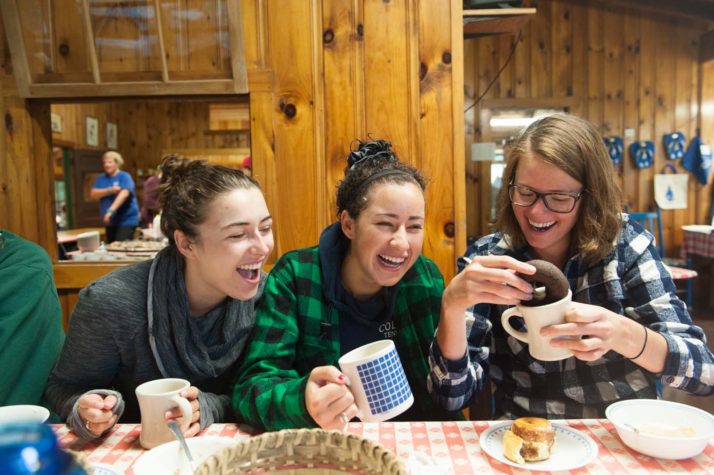 The weather isn’t ideal for alumnae weekend at Camp Runoia in Belgrade: it’s raining and cool for mid-August. But since the chance to participate in the Oak Island Swim comes only every five years, 11 hardy women plunge into Great Pond for the two-mile round-trip. Gathered in the boathouse on the shore, fellow alumnae, spouses, and children stay warm and dry while waiting for the swimmers to return. Older women reminisce about their years at camp, while little girls look around in awe, anticipating summers in this magical place. The weathered building is not only Runoia’s headquarters for watersports; it is a touchstone, its board walls and ceiling covered in camper names and years. Some older inscriptions are roughly scrawled and mysterious: “Piglet 1928-29;” “T Hopy 38.” According to one former camper, girls used to sneak into the boathouse at night to paint their names; now the tradition is more organized. Only campers in their final summer who have been coming to Runoia for at least three years get to leave their mark in the boathouse. They paint their boards in the adjacent art room, and because the only remaining space is on the ceiling, an adult climbs a ladder to hang them.

“There they are,” someone shouts, as one of the accompanying kayaks rounds the point. Soon the swimmers are splashing triumphantly out of the water and onto the little beach, grabbing towels and hugs. “The last time I did the Oak Island Swim was 40 years ago,” says Katharine Bowring Coyle, who came to Runoia from Long Island, New York, in the 1970s. Swimmer Matti Bradley, a Camp Runoia Alumnae Organization board member, says the swim has become a “bucket list item” for women who never did it before. “Even though we were encouraged to do everything at camp, for some of them it took 20 or 30 years to get comfortable with it.”

The swim and other activities hosted by the alumnae organization raise money for the Betty Cobb Campership Fund, named for Runoia owner and director Pam Cobb’s mother, who ran the camp for more than 40 years. The alumnae organization was formed in the 1980s to offer financial help to girls who otherwise might not be able to afford Runoia. “Out of 219 campers this summer, we had 28 girls on partial assistance,” says Pam Cobb.

Having hosted campers for 110 summers, Camp Runoia feels timeless and deliberately old fashioned. Campers sleep on simple wooden bunks in shingled cabins tucked into the trees around the rustic campus; the cabins have toilets and sinks, but the girls take showers in separate cabins called “soapies.” Most meals are served family-style in the dining hall, which has windows on three sides, tables covered in red-and-white- checked oilcloth, and bench seats painted bright blue. The camp offers a ropes course, yoga, windsurfing, and stand-up paddle boarding, but most of the activities campers can choose from have remained unchanged for generations: canoeing, tennis, archery, swimming, arts and crafts.

Cobb sees the activities as tools that encourage campers to develop independence and encourage exploration. “You can be a different person here than you are at home,” she says, “so if you’re the little sister who’s always picked on and can never be as good as your older siblings, you can come here and be a hero. You can be a superstar.”

The fourth generation of her family to be in the camp business, Cobb has owned and operated Runoia since 1991; her daughter, Jai Cobb Kells, joined her in 2012 as assistant director. Pam Cobb’s parents, Betty and Phil Cobb, met when both were working at Wyonegonic Camps for girls in Denmark, Maine, which was founded— along with Winona Camps for boys—by Phil’s grandfather, Charles Cobb. After they married, Phil and Betty, who were both educators, looked for their own camp. They discovered Runoia, founded in 1907 by Jessie Pond and Lucy Weiser. “Lucy invited them to come up for a summer,” says Cobb. “She liked them and at the end of that first summer, in 1959, they bought the camp.”

Pam was born on opening day of camp the following summer. “We had a lot of people from New Jersey and New York, so we used to charter a bus with Pine Island Camp, which is on the same lake. My mom was in Princeton, New Jersey, where we lived, in the hospital, which was killing her because it was opening day, and my dad called—or she called camp— and he said, ‘Is it a boy or a girl?’ and she said, ‘Did the bus get there?’”

Over lunch in the dining hall, grandmothers, mothers, and daughters share their Runoia memories. “We had a campfire last night, and my daughter knew all the songs because they were her lullabies,” says Betsy Nicholson, who attended Runoia in the late 1980s. “My generation isn’t here; I’m missing them,” says her mother, Cathy Nicholson, who came to Runoia for the first time in 1957, and eventually became a counselor. At another table, 13-year-old camper Abby sits with her mother, Emily Wilson, and her aunt, Jessie Angus, who both went to Runoia. “I was a pretty quiet kid; camp was a comfortable, safe environment to try new things,” says Angus. “I see Runoia friends more than my high school friends.” Abby shares her experience hiking in Maine’s Bigelow Range, part of Runoia’s wilderness trips program. “The hiking part wasn’t the most fun,” she says. “But it was fun to be with my friends.”

In their later years at Runoia, both Wilson and Angus became Junior Maine Guides— the third level of a wilderness skills training program jointly administered by Maine Summer Camps and Maine’s Department of Inland Fisheries and Wildlife. Girls in the CIT (counselor in training) program are also taken on college visits to Bowdoin, Colby, and Bates. “We usually hit two of the three schools,” says Cobb. “I think we’re influencing kids to think of Maine as a great place not just to come for camp and vacation, but to live and have a career.”

“Had it not been for Runoia, there are people in my life who wouldn’t exist,” says Bradley, who went to camp from 1969 to 1982 and “married a boy from the other side of the lake.” She and her husband, Chris, have two grown children; their daughter, Maggie, spent eight summers at Runoia as a camper and counselor. The family tradition began with Bradley’s mother, Joan Bayne Williams, known to all at camp as “Baynie,” who grew up in New Jersey, just outside of New York City. “All the kids going to any of the camps in Maine would gather at Grand Central with their trunks,” says Bradley. “They would ride the train all the way to the Belgrade station.” When World War II broke out, Bradley’s father went to war and Baynie went back to camp. “She became the canoeing counselor, which was called the tripping counselor then,” says Bradley. “You would never have known because she was a boiled-wool-jacket-and- pearls sort of girl.”

In the 1970s, the Williamses built a house on Great Pond next to Baynie’s beloved Runoia. “My mother used to take her campers on luncheon trips to Echo Cove next door,” says Bradley. “She would say, ‘This is where I’m going to have my house.’ My dad eventually convinced the old codger who lived there to sell the land to Mom.” Baynie celebrated her ninetieth birthday at Runoia, and when she died in 2014, Bradley got cards and letters from many women who knew her mother from camp. “Runoia has been a real blessing for our family,” she says.

As “decade” photos are taken out on the lawn outside the dining hall, Bradley, whose time at Runoia spans three of them, races from one group to another to be included in the photos. The Bradleys built their own lake house next to Williamses’; it is full this reunion weekend, as always, with camp friends from near and far. “I try to talk everyone into coming back,” says Bradley. “My camp buddies are probably my closest buddies.”

Later in the afternoon, everyone gathers in the Lodge, where a roaring fire chases away the dampness. Shelves along one wall hold Runoia’s bound logs—diaries of each year at camp. Full of poems, stories, photos, and details of trips—in 1922, a multi-day excursion to Mount Blue in Weld was made on horseback—the logs connect generations of Runoia campers. They show that even more than 100 years ago, the camp was a place where girls were encouraged to be adventurous, to care about each other, and to respect the natural world. Every five years, the alumnae reunion offers evidence that Runoia has nurtured generations of women who, to paraphrase a favorite line of Betty Cobb’s, “remember who they are and what they represent.” Every summer, that legacy continues. 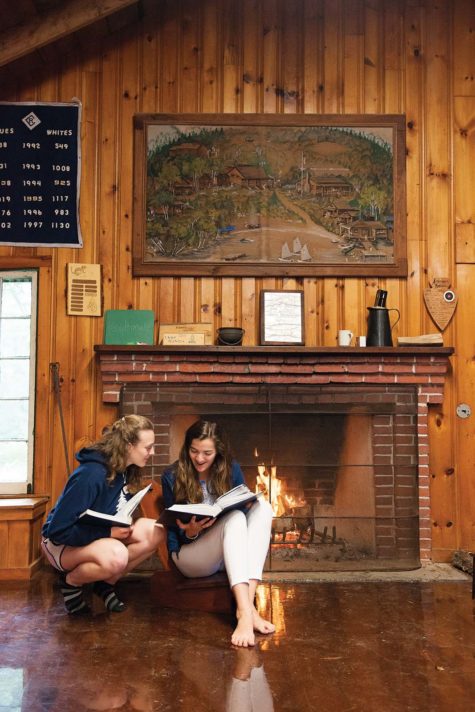 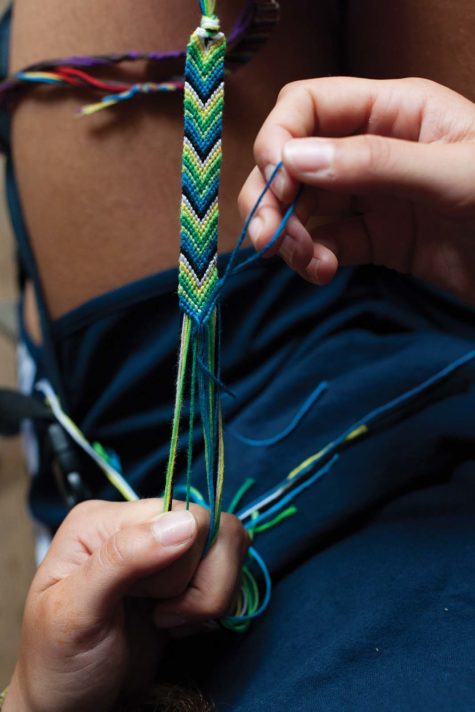 Girls weave friendship bracelets in the arts and crafts room. 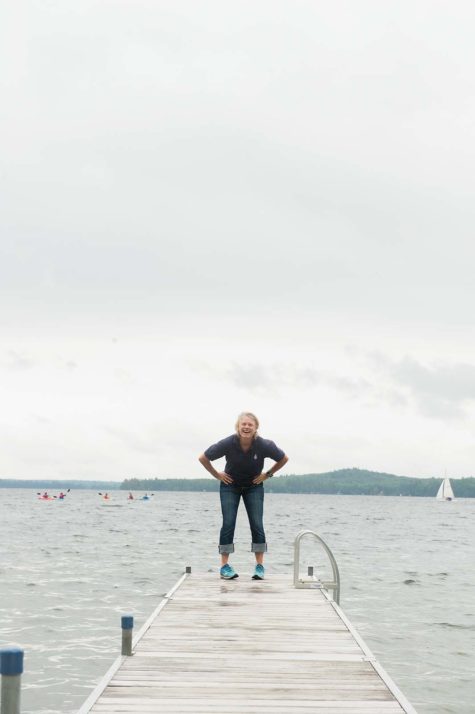 Pam Cobb on the camp dock.