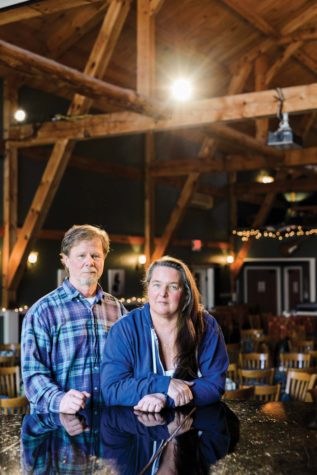 Ever since Carol Noonan and Jeff Flagg opened Stone Mountain Arts Center in the woods of Brownfield in 2006, the barn-turned performance venue has been attracting world class musicians, and an audience, from well beyond western Maine. Noonan, a singer-songwriter, and Flagg, a former commercial fishing net builder, moved to Brownfield in 1994. While Noonan was touring, she noticed that many owner-operatedvenues, where more attention is given to artists and audience members, had closed. She thought they could do better, so Flagg, with volunteers and local contractors, converted the barn behind their house into a venue. “Instead of starting small, which would have been the safe thing to do, we started big so we could get people to travel and find the place,” Noonan says. She used her connections in the music industry and the reputation the venue was developing to book bigger names, like Mary Chapin Carpenter, Lyle Lovett, and Mavis Staples. “The room’s so intimate. When you have an artist they play a different show here because the audience is right in front of the stage,” Noonan says. “When Lyle Lovett is here and you’re five feet away from him, that just creates a different environment for a show.” Looking back, Noonan and Flagg say they were lucky to find success, partly crediting the town of Brownfield for its support. “Had we known what we would be facing,” Noonan says, “we might not have had the guts to do it.”