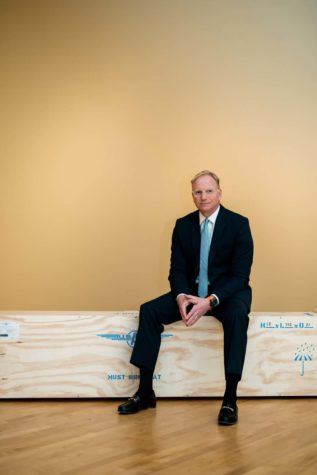 Director of the Farnsworth Art Museum

Chris Brownawell joined the Farnsworth Art Museum in Rockland as director in 2010 after working as CEO at the Academy Art Museum in Easton, Maryland, for more than two decades. Since its founding in 1948, the Farnsworth has been a focal point for the arts in Rockland, and in recent years the midcoast town has gained national exposure as an arts destination. In 2015, Brownawell helped secure $17 million in state and federal tax credit financing for significant improvements to the Farnsworth’s Rockland campus and work on the Olson House in Cushing, the setting of Andrew Wyeth’s 1948 painting Christina’s World. “Maine continues to play a significant role in the discourse of American art,” he says. “For generations artists have been attracted to the state for its beauty, its people, and its inspiration. It is an important story to tell.” With a mission of celebrating Maine’s role in American arts and 15,000 objects in its collection, “the Farnsworth is uniquely equipped to tell this story,” Brownawell says. The museum’s works reflect its location, focusing on artists with connections to Maine or the midcoast region. It is home to one of the largest collections of paintings by the Wyeth family and the second largest collection in the country of Louise Nevelson’s work. “The Farnsworth Art Museum is a very special place,” Brownawell says. “It has deep connections to its midcoast community; at the same time it has a national reputation and audience.”