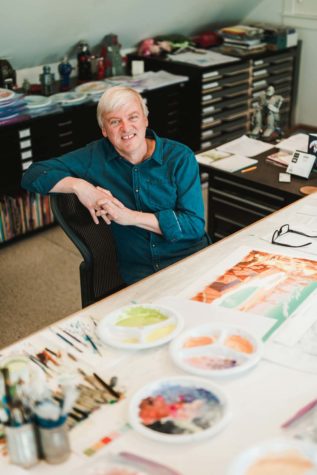 Like many kids, Chris Van Dusen liked to draw. When he visits elementary schools, the children’s book author and illustrator says he sometimes asks the students to raise their hand if they like to draw, and all the hands go up. “The only thing that was different about me is that I kept drawing because it was the one thing I could do with some success,” Van Dusen says. After graduating from the University of Massachusetts at Dartmouth with a bachelor of fine arts degree in 1982, he tried to make a living as a fine artist. But with a young family, it made more sense to become an illustrator. He worked for more than a decade as a freelance illustrator for magazines, specializing in art for kids, before he combined an image he had drawn of a boat stuck in a tree and story idea about a character named Mr. Magee driving down to the sea. His first book, Down to the Sea with Mr. Magee, was born. The Camden resident has since written and illustrated nine other books and has illustrated fourteen books with other authors. One of his most popular books, The Circus Ship, which was published by Candlewick Press ten years ago, was just inducted into the Picture Book Hall of Fame by the American Booksellers Association. “This job can sometimes feel a little solitary working every day at home,” Van Dusen says. “But when you visit a school or a library and see a child genuinely excited about your book, with all the distractions and all the screens they have competing for their time, that’s probably the most rewarding thing of all. It’s the enthusiasm of a young reader that makes all the late nights and tight deadlines worth it.”