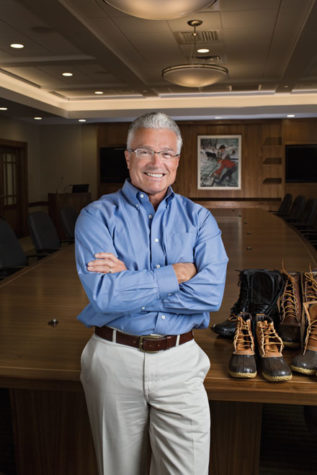 In 2001 Christopher J. McCormick became president and CEO of L.L.Bean— the first non-family member to hold the position. “To follow in Leon Gorman’s footsteps was a privilege as well as a challenge I was looking forward to meeting,” says McCormick. McCormick has worked at L.L.Bean for over 30 years. In his time as president, Forbes magazine named the Freeport-based company one of America’s best employers for 2015—ranking fifth overall on a list of 1,200 companies. L.L.Bean was also named by Fortune magazine one of the top 100 companies to work for. McCormick launched the company’s international business, spearheaded the development of the L.L.Bean VISA credit card program, and in 1995, he led the way into e-commerce. McCormick serves on the board of trustees of the Maine Community College System and is a member of Fairfield University’s advisory board. He formerly served as co-chair of the Nature Conservancy’s Corporate Conservation Council, board member of the Nature Conservancy, and member of the campaign cabinet for the United Way of Greater Portland. He is also a board member of the National Retail Federation.