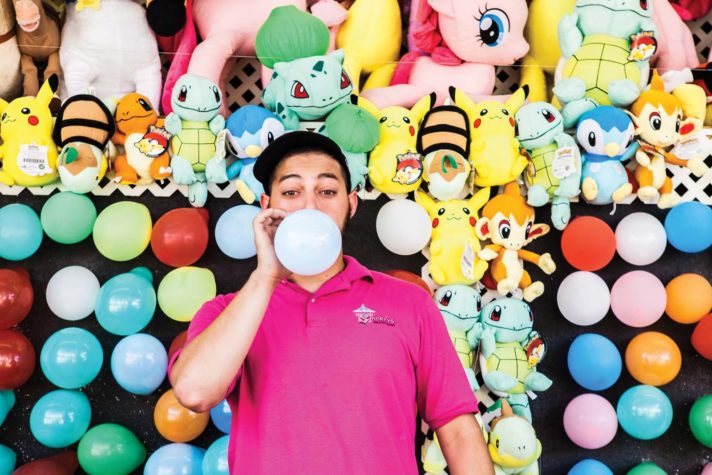 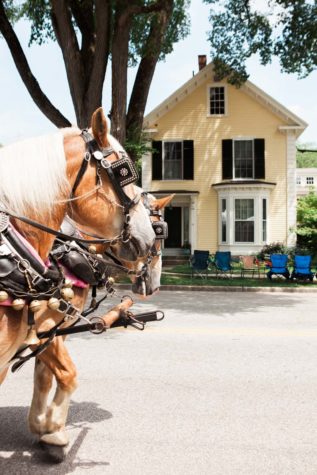 Parade horses head up the street, along which people begin setting out chairs weeks in advance to reserve their viewing spots. 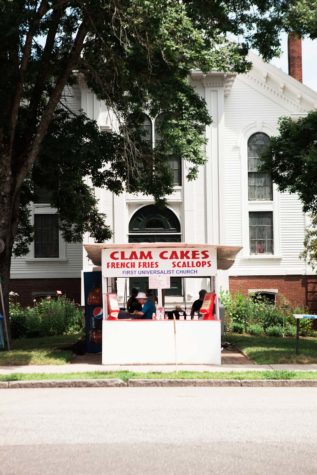 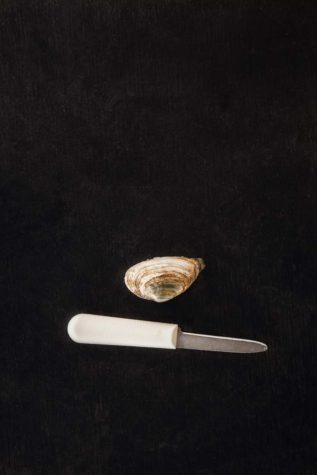 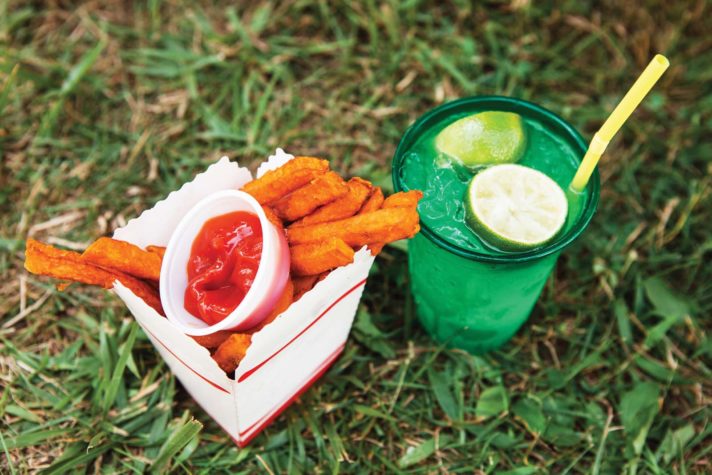 Sweet potato fries and a lime rickey are sure to hit the spot on a warm July day. 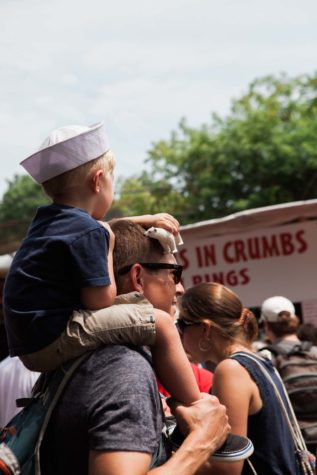 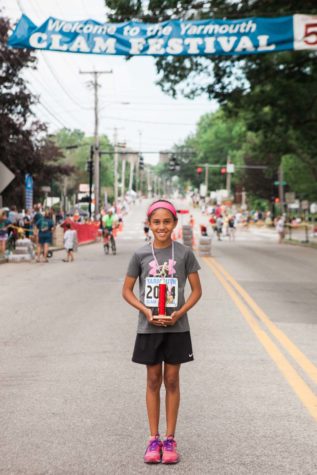 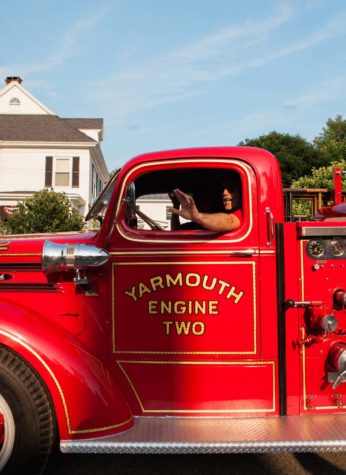 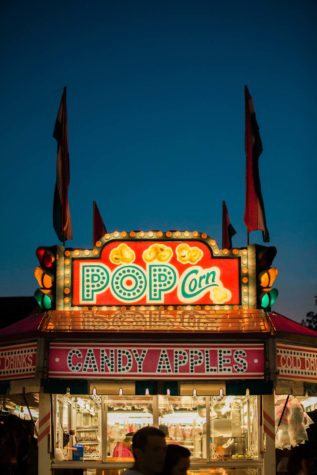 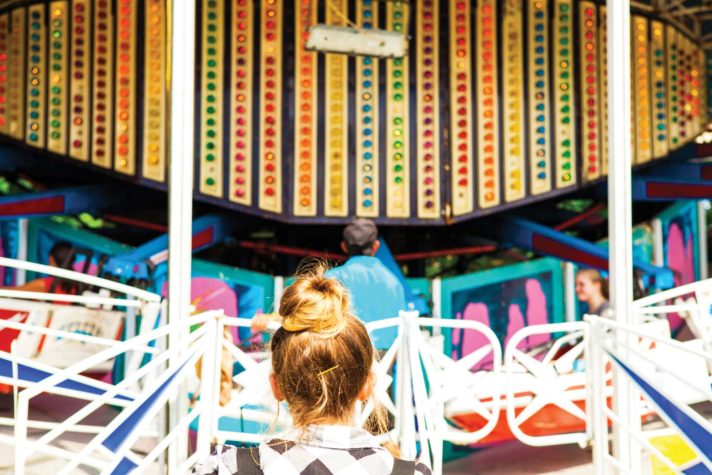 Standing in line for a festival ride offered by Smokey’s Greater Shows. 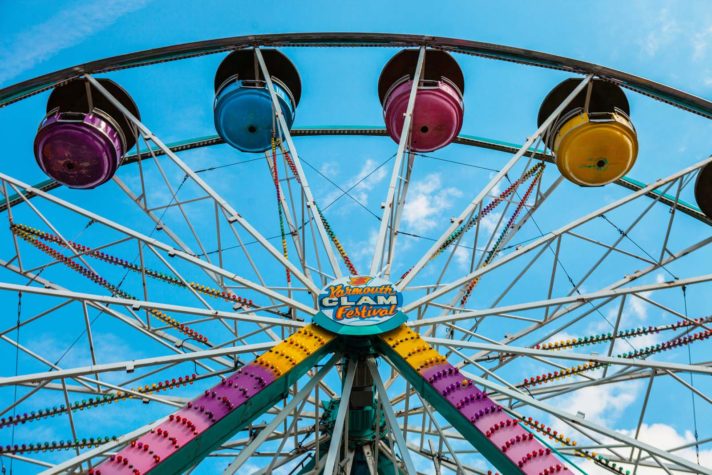 Getting a bird’s-eye view of the Yarmouth Clam Festival.

The Yarmouth Clam Festival has been drawing families, seafood lovers, and roadside lawn chairs for more than 50 years

I was just tall enough to see out the window of my family’s station wagon, and I pressed my face to the glass, hoping for a glimpse of our new town. Although the nearby ocean was a familiar sight, the trees were tall and pointed, nothing like the jaunty Florida palms I had known. Then, rising above the horizon, I saw it: a Ferris wheel, glinting in the sun as it slowly revolved. I could not believe our good fortune. We were moving to a place that had not only a carnival but also a three-day celebration centered around food and fun. We were relocating to the home of the Yarmouth Clam Festival.

The Yarmouth Clam Festival began in 1965. Held during the third weekend of July every year, this free event attracts more than 120,000 people annually. Visitors come to our coastal Maine community to watch the Friday night parade, run in the five-mile road race, shop for handmade items, and eat thousands of pounds of seafood. For the 8,500 Yarmouth residents, it is a multi-street block party and reunion, which also supports more than 35 school and civic organizations.

Known for its proximity to Portland, Yarmouth has ample access to farmland, woods, and waters. Indigenous people inhabited the area for thousands of years before more recent settlers came in part because of the Royal River, which now features four sets of power-producing waterfalls along a mile of navigable water. According to the Yarmouth Historical Society, the first sawmill here was built in 1674. There have been 57 mills and several factories—producing everything from grain and lumber to shoes and bricks—along the banks of the Royal. Yarmouth was also once a shipbuilding town: its school teams are known as the Clippers, although the speedy sailing vessels were never constructed here.

My parents had selected Yarmouth carefully. My father, raised in Biddeford, had recently completed his medical training in the navy, and wanted to join a small family-medicine practice. My mother, a native of South Portland, was a teacher. They met while studying at the University of Maine in Orono. When it came time to move back to their home state, they chose a town where their growing family would get a good public school education. I was six years old and had recently finished first grade at Lakeside Elementary School in Orange Park.

We did not attend the Clam Fest the day we moved in to our century-old Church Street home, located down the hill from Yarmouth’s Old Meeting House. My parents had five children under the age of six—including a newborn—and despite our pleas, my siblings and I got no closer to the downtown hubbub than listening to the commotion from our front yard. In subsequent years, we watched the Friday night parade from West Elm Street, a block away from our house. My sisters (Amy, Adelle, and Emily) exclaimed over the clowns who doled out candy to the kids sitting curbside; my brother, Jeff, was always a fan of the miniature cars driven in circuitous formations by adult Shriners.

Every year or so, my parents added a sibling to our clan until there were ten of us, with Matt, Sarah, John, Brian, and Peter rounding out the ranks. When we were old enough, we became part of the show, taking turns marching with the Girl or Boy Scouts, playing in the Harrison Middle School band, and riding on neighborhood floats. When my own children entered the Yarmouth school system a generation later, they did the same. My son, Campbell, once drove Maine TV celebrity Bill Green in a donated convertible—through a sudden downpour. By then it was my turn to play the role of spectator again, watching from the lawns of friends who had homes along the route and thus used their proximity as a welcome excuse for a party. Each year we carefully sidestepped the chairs that parade watchers set out on the streets of Yarmouth weeks in advance of the occasion.

I attended my first several Clam Fest craft fairs with my twin sisters, Amy and Adelle. Clutching change purses filled with money we had earned by delivering newspapers on foot, we meted out our dollars with extreme discernment. Sometimes our hard-won wages bought a pair of earrings, sometimes a puppet. Later, my sister Emily and I would walk the same paths on the North Yarmouth Academy grounds with our kids, sipping lime rickeys and stopping to listen to the performances underneath the nearby tent. Occasionally, we would bring the kids to the carnival located behind the Merrill Memorial Library on the Rowe School baseball field. It was a milestone when my adolescent children began attending Locals Night at the carnival by themselves, sporting plastic wristbands and catching up with friends that they hadn’t seen since school ended in June.

The Clam Fest features sporting events ranging from a diaper derby to a professional bike race. On Saturday morning we now run (or watch) the Pat’s Pizza Clam Festival Classic road race and kids’ fun run. The road race begins and ends in front of Main Street’s cheering crowds. In between, the five-mile course loops around East Elm, North Road, and the tree-lined Royal River path. The North Road segment can be particularly unforgiving on a hot July morning, but there are numerous water stations and individuals with their garden hoses at the ready as the runners pass by.

After crossing the finish line, we head for the food booths on Memorial Green. Each year 3,000 volunteers from local churches, schools, and community groups serve “more than 6,000 pounds of clams, 6,000 lobster rolls, 2,500 pancake breakfasts, 2,000 shore dinners, 400 homemade pies, and 6,000 strawberry shortcakes …washed down with over 13,500 lime rickeys,” according to the Yarmouth Chamber of Commerce, the organizers of the festival. Being a Clam Fest volunteer is an important part of living in Yarmouth; the money we raise goes to our nonprofit organizations. My parents, siblings, children, and I have done everything from flipping blueberry pancakes to selling soda, picking up trash, and overseeing parking.

When we aren’t doing our civic duty, we are watching events like the firefighters’ muster and the Maine State Clam Shucking Contest. We stop in at the Yarmouth High School alumni booth to browse through old yearbooks. My daughters, Abby and Sophie—the youngest of whom will enter her final year of high school in the fall— marvel over the perms my friends and I had in the late 1980s. When it is time for the fireworks, we spread our blankets across the nearby playing fields and watch multicolored sprays of stars light up the sky. Sunday is another full day of events, and then the Yarmouth Clam Festival is over for another year.

I thank my parents for having the prescience to move to Yarmouth—to the magical place of the Ferris wheel. After several decades living in this town, I still look forward to the third weekend in July. There is nothing like a summer festival in a small Maine town. 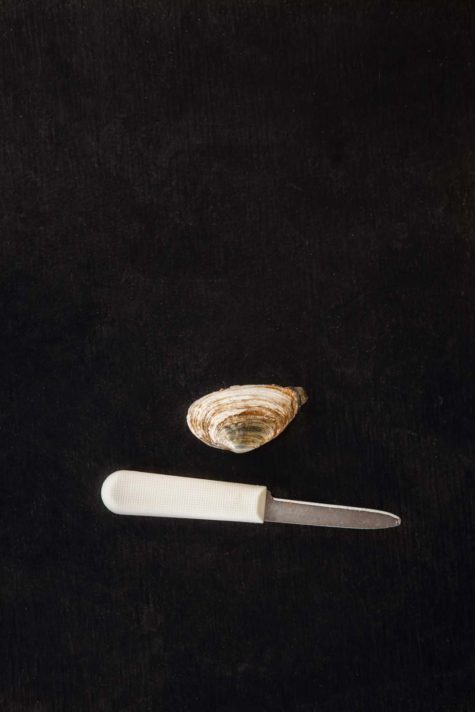 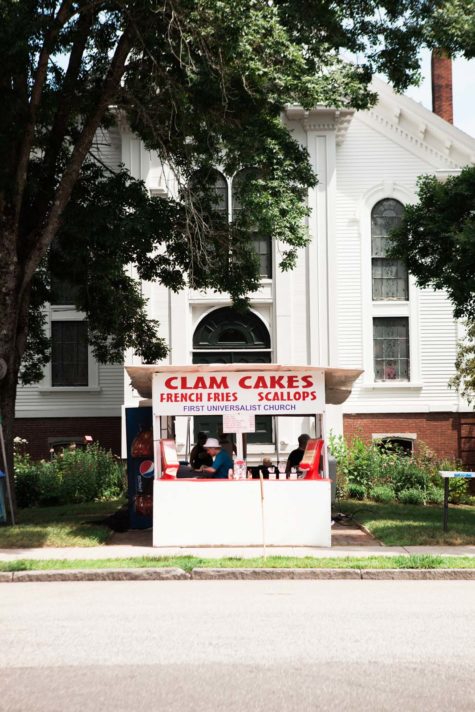 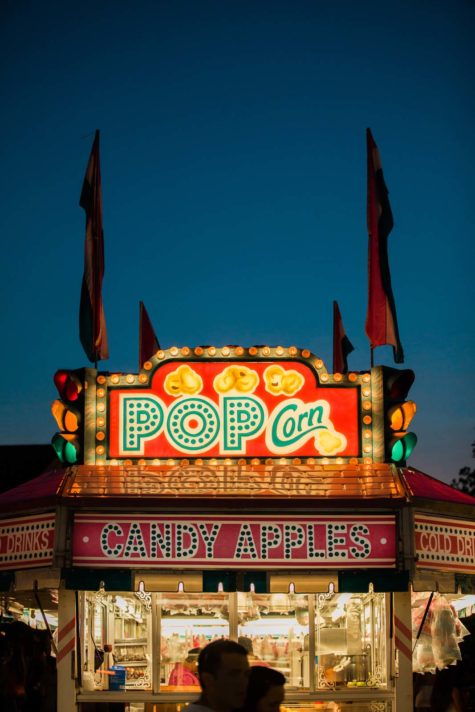