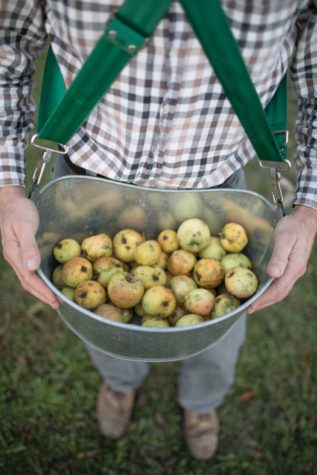 David Buchanan holds a bucket of apples freshly picked from his Pownal orchard. 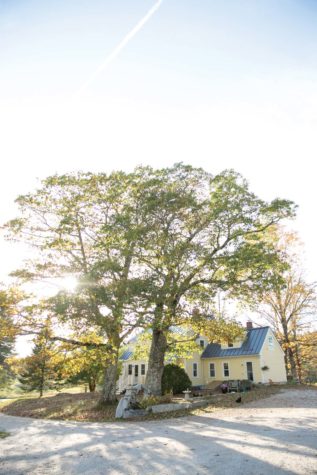 Buchanan lives on the property in a 130-year-old house near the entrance to Portersfield Cider. 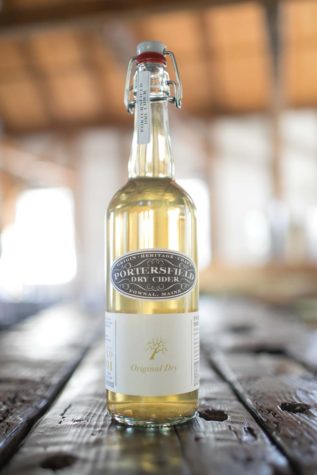 Portersfield Cider sells two cider varieties all year (the Original Dry and the Aronia) as well as small-batch ciders on rotation. The bottles are for sale in the tasting room. 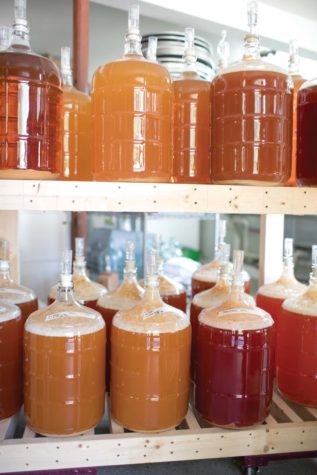 The cider is fermented and bottled in the tasting room adjacent to Buchanan's home. 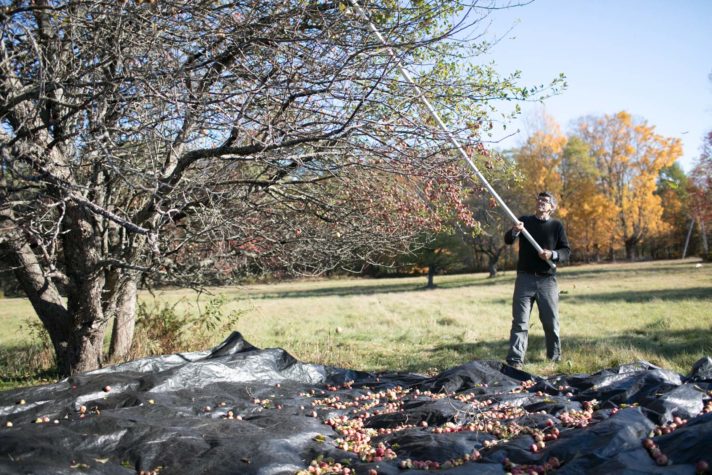 Buchanan pulls down apples and collects them on a tarp spread out below. 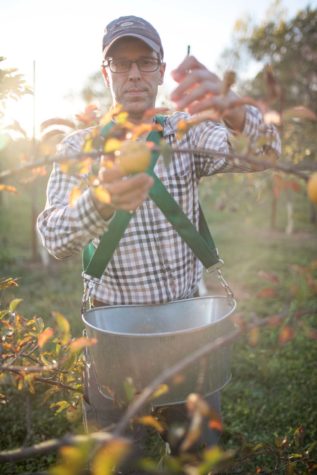 Buchanan loves searching for new apple varieties and often grafts trees found in the wild to plant on his farm. 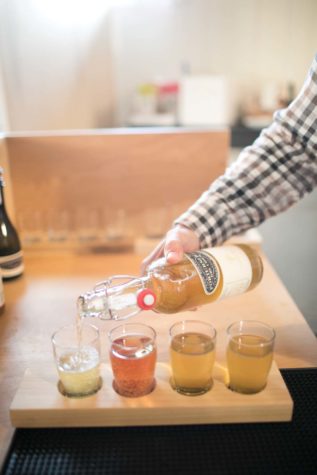 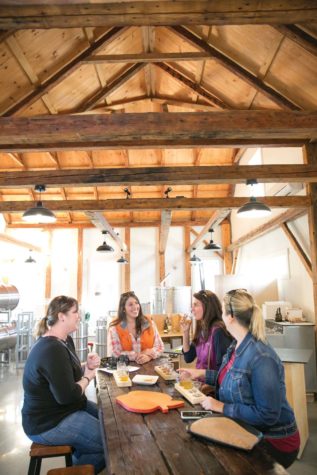 Buchanan enjoys talking with customers about the different cider flavors and what foods they pair well with.

With his gazetteer by his side, in the fall of 2016 farmer David Buchanan put over a thousand miles on his car in search of hidden fruit. It was a difficult year for apples, and he had to head north from his farm in Pownal to find what he was looking for. He stopped in fields and forests from Rumford Notch to Deer Isle to forage for misshapen, rough-skinned apples. He knocked on strangers’ doors whenever he saw apple trees on their property. After getting permission from the property owner, Buchanan would pull down fruit and tug on branches, catching his haul in a tarp spread out below the tree, then he’d move on to the next location. “I go where the fruit is,” he says.

The “wild” apples Buchanan collects are rare varieties, many of which are close to extinction. With origins in Maine, they look different from the larger, unblemished apples found in grocery stores. Instead of eating this fruit, Buchanan presses and ferments it to make a historic New England drink: hard cider. “I like to collect rare trees and give people access to their flavor,” he says. “For me, it’s not enough to just collect the apples. I like to do something with them. Not doing that would be a limitation.” In 2012 Buchanan bought a Pownal farm to grow fruit trees—he currently has over 200 apple varieties—and last year he opened a tasting room on the property. He also grows peaches, pears, plums, cherries, raspberries, and other fruits.

Despite being a young company, Portersfield Cider is steeped in history. Its name is derived from Dr. Aaron Porter, Buchanan’s ancestor and the namesake of the town of Porter. Buchanan’s home on the property is almost 130 years old, and the tasting room is made of hand-hewn timber from a Guilford farmhouse built in the 1820s. It’s the apples, though, that connect people to the past here. Buchanan’s 600 trees grow modern and heirloom apples, most of which can’t be purchased in stores. Over the past several years, Buchanan and a small team have been foraging apples, collecting seeds and grafting trees for his Pownal orchard, and harvesting apples for cider. Some trees take ten years to yield fruit, and fermentation takes two to three months. “I like to ferment slowly,” he says. “It’s less predictable, but it’s more interesting.”

Buchanan enjoys the process, but his favorite thing about making cider is introducing people to new flavors. Wild apples produce a different-tasting cider than other hard ciders people may drink, he says. Buchanan’s natural fermentation process gives the cider a bite and allows the natural flavors of the apples to come through more strongly. He likes to remind people of the possibilities Maine has to offer, and that it’s offered for hundreds of years. “We’ve lost that palate,” he says. “It feels like a missing piece of our New England cuisine. I’m trying to show the range of flavors that are possible in apples.” Buchanan especially likes to find “one-off wild seedlings” because it allows him to make something truly unique. “It’s a local drink,” Buchanan says. “This is our native wine.”

Portersfield Cider sells two cider varietals year-round (the Original Dry and the Aronia), plus small-batch ciders on a rotation. Buchanan sells his bottled cider at the Portland Farmers Market, at restaurants, bars, and shops from Portland to Brunswick, and at his small tasting room. The space, painted a rustic white with exposed beams and high ceilings, has an intimate, cozy feel. Buchanan enjoys being in the tasting room with customers, explaining flavors to them and helping them to pair light food options with their drinks. It’s important to him that people understand the process of making the cider so they can feel more connected to their drink and where it comes from. The farm’s rolling apple orchard is visible on a slight hill just beyond the tasting room. “I don’t just grow fruit trees,” Buchanan says. “The whole purpose of this farm isn’t to produce a product. It’s to bring the community in. I like to see people connecting with the farm and the land.”

Buchanan also hopes to connect people with the past. He’s not looking to recreate an old-fashioned way of life, but he does make his cider through a traditional process. Foraging for fruit is strenuous at times, but it’s the only way to find apples that would otherwise be forgotten. “I like that it’s a piece of our tradition,” he says. “I forage for wild seedlings because it’s how I find interesting fruit.” Making relatively unknown apples more accessible is a challenge, so it’s something Buchanan doesn’t do alone. He has been helping the Maine Organic Farmers and Gardeners Association (MOFGA) develop a heritage apple orchard in Unity. The goal of the preservation site, called Maine Heritage Orchard, is to grow every variety of apple known in Maine, of which there are more than 600. The orchard is about halfway there and has apple varieties from all 16 counties. Some come from trees dating back to 1630.

Buchanan hopes to make the rare apple varieties more plentiful so they will no longer be on the verge of extinction. He wants Mainers to enjoy the different flavors for years to come. “I feel like I’m just scratching the surface,” he says of the apples he’s collected. “It’ll take a generation or two to bring these into cultivation.” For now, Buchanan will continue digging through the woods and pulling to the side of the road in search of interesting tastes and flavors. To him it’s an act of creativity as much as one of preservation. “It’s exciting to come up with something that has its roots deeply right here,” he says. “I feel like I’m trying to do something that’s rooted in heritage while also looking forward.” 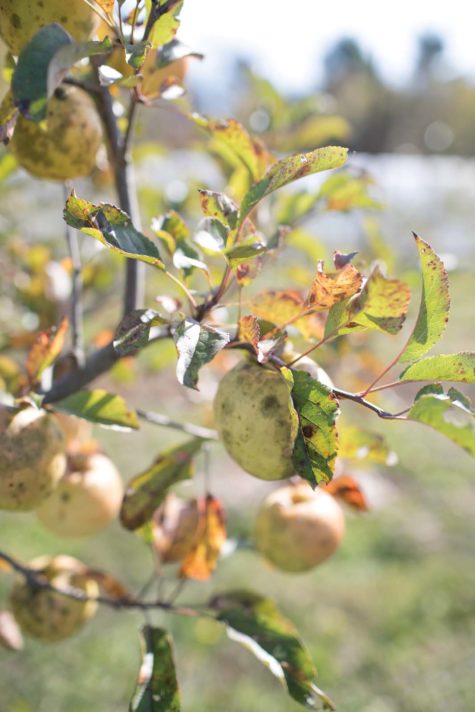 Over 200 varieties of apples grow on over 600 trees on Buchanan's property, which is also home to his company, Portersfield Cider. 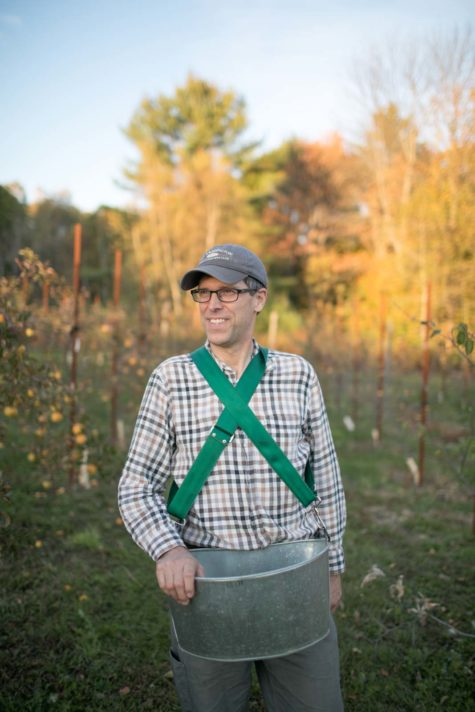 Buchanan picks apples from the trees on his orchard and also forages them throughout the state. 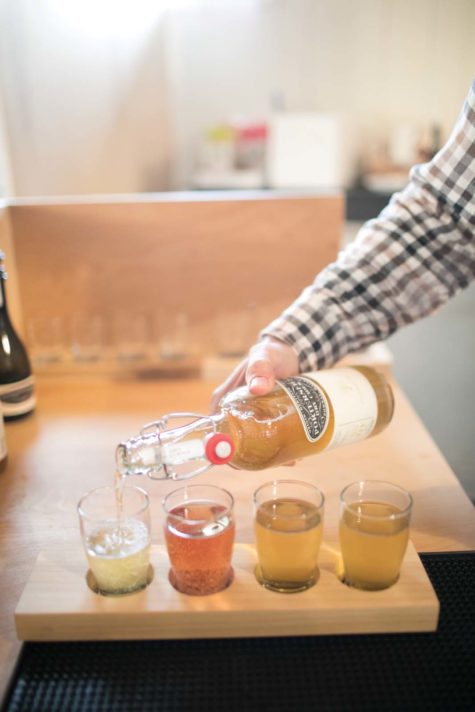