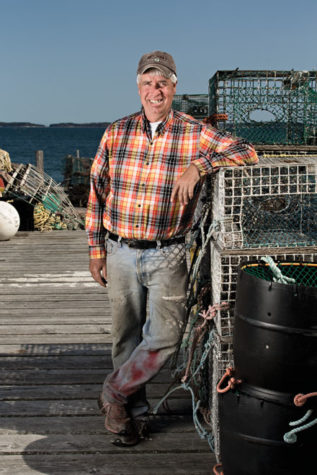 David Cousens has been the president of the Maine Lobstermen’s Association (MLA) for 24 years. Cousens led the organization through the 1990s, which saw numerous drastic changes in the regulation of the Maine lobster industry. “All of these changes were very controversial and didn’t happen without a lot of meetings and negotiations from the harvesters to the legislature,” says Cousens. Cousens brought together Maine lobstermen and scientists at meetings so that they could listen to one another’s perspectives. “In the early 1990s fishermen and scientists were not on the same page, and the biggest reason was lack of respect from both sides. So one of the things that the MLA and I did was to have scientists and fishermen work together. This fostered mutual respect for each other,” says Cousens. Cousens was a driving force behind conservation laws that included limits on lobster size, v-notch protection, vent size increases, and a prohibition on dragging for lobsters.