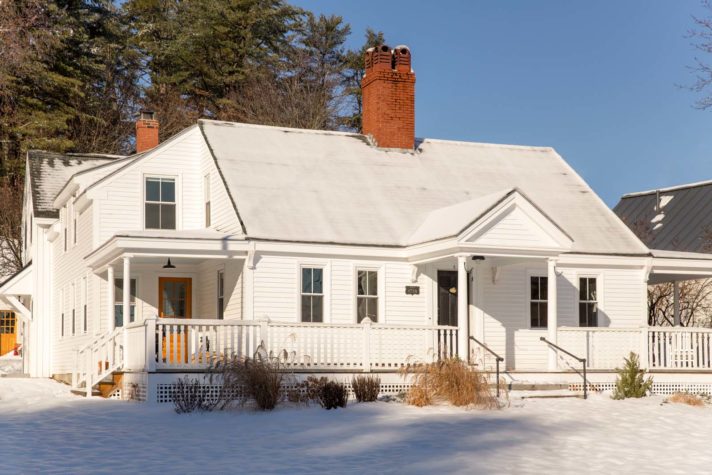 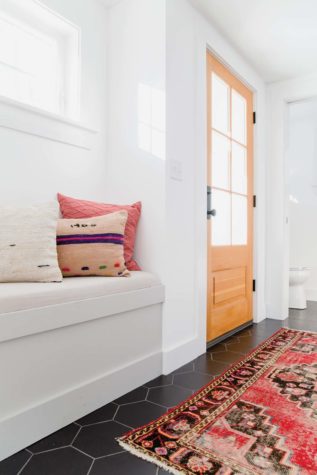 Sarah believes in the powers of white paint when it comes to sprucing up a room. The overall color palate in their home is black and white, with some warm accents coming from their eclectic textile collection. 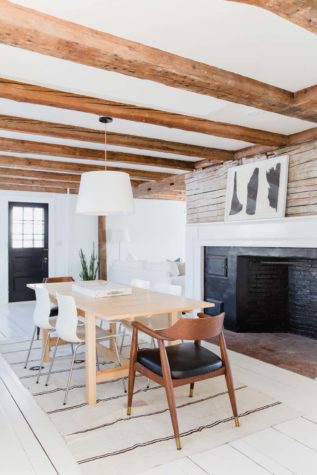 The piece above the black-painted fireplace is by Sarah’s aunt, Anita Madeira. “She does collage as a hobby, and these are pieces of painted billboard from the streets of New York City that she collected and made into a piece of art,” explains Sarah. 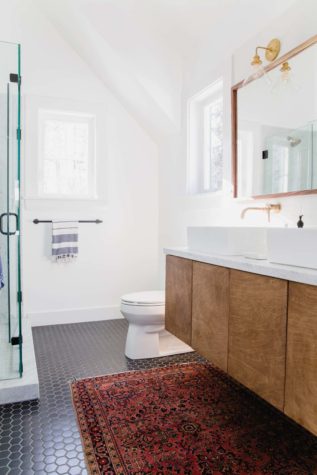 The cabinet in the bathroom is plywood stained to look like walnut (the mirror above the sink is actually walnut). Rug purchased at Portland Flea-for-All. 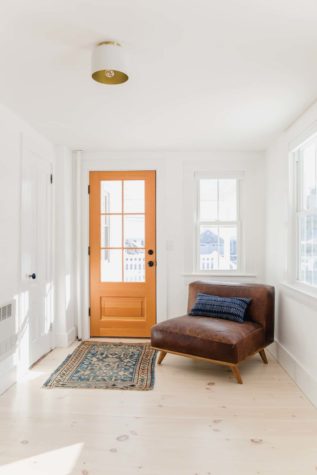 The couple purchased this large leather chair at Marden’s. “It’s a testament to the idea that you can get cool things inexpensively if you search around. Marden’s is so Maine,” Sarah says. 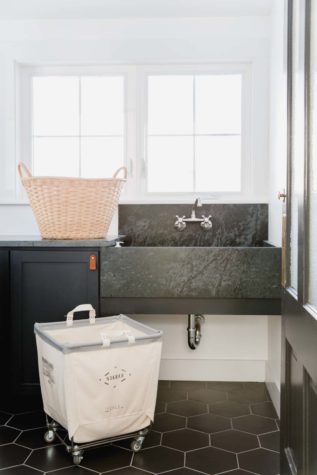 The laundry room sink was installed by Wesley’s father, who owns a countertop company, Bangor Wholesale Laminates, which has shops in Portland and Bangor. 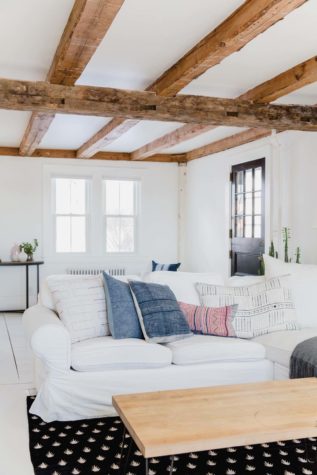 The white slipcovers are easy to care for, according to Sarah. “In a way, it’s even easier than a pattern to keep clean because you can just bleach and wash them,” she says. 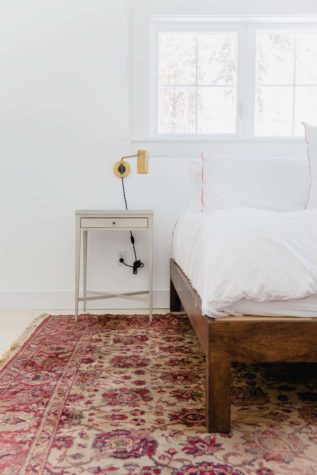 Much of the house is heated by heat pumps, including the couple’s bedroom. 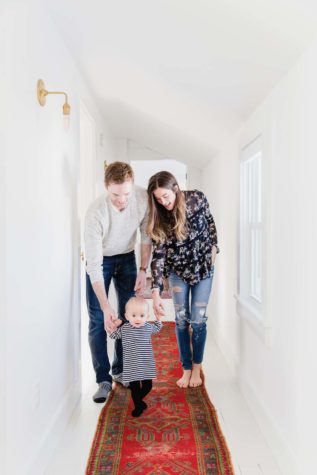 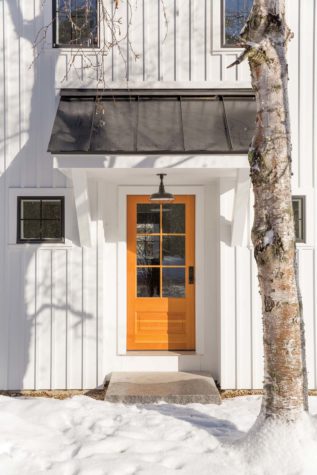 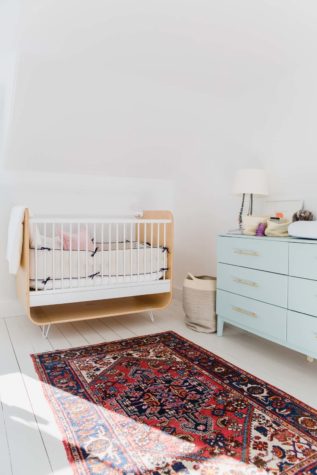 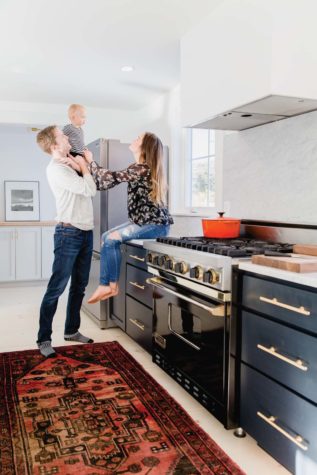 The kitchen stove, restored to its former glory by Wesley’s hard work. Behind the couple hangs a collage on the wall by Andrew Howard, one of Sarah’s college professors.

When Sarah Madeira Day and Wesley Day purchased their in Cumberland Foreside, it was in rough shape. Originally built in 1729, the house had low ceilings, dark rooms, and poor airflow. Even their realtor, who has sold the young couple their previous house, asked, “Are you guys really sure you want to do this?”

They were. Behind the fading paint job, underneath the layers of crumbling plaster, they saw a promising future for their growing family. However, it took some time—and hours of hard work—before other people were able to see the house’s latent potential.

“I grew up in a historic hotel on Mount Desert Island, and my dad and uncle did most of the work,” Sarah remembers. Living in a hotel wasn’t quite like Eloise, she says. Her childhood involved a lot of hard work preparing for guests during the off-season and hard work making guests happy during the high season. “You have to be savvy in Maine,” she says. “It’s funny that we’re called ‘Vacationland’ because people here never stop working. They have multiple jobs. When you go to school somewhere else, or move out of state, people will tell you, ‘Oh wow, you do so many things!’ But it’s not unusual. That’s how Mainers survive.” Over the years, she’s held a diverse array of jobs; she’s worked as a health care associate for Planned Parenthood, a design assistant for Urban Dwellings, and as the kitchen manager for Dandelion Catering Co. (among others). She paints (her pieces are available online through Etsy and her personal website) and works part time for both e4 Interior Design and the Refinery, where she serves as a design assistant and an event coordinator, respectively. Sarah also documents the couple’s DIY projects and home improvements on her instagram account, @ThisMaineHouse.

Wesley, who works full-time as a pharmacist, has a similarly dogged work ethic, instilled in him by his father, who runs a millwork and laminates business in Portland and Bangor. Like Sarah, Wesley grew up around construction, learning almost by osmosis. During our house tour, Sarah points out a simple circular mirror encased in dark wood that hangs on the wall in their bedroom. “Wes made that,” she says with pride. “I have no idea how he did it. On the weekends, when no one is there, he goes to his dad’s millwork shop and uses his tools. One day, he came back with this.” It’s the kind of piece that would cost $400 at Pottery Barn, and like the rest of the home, it’s deceptively inexpensive.

I phrase it that way because the home looks expensive in the rustic-chic way that’s been dominating design magazines for the past few years. There are leather pulls on the cabinets, hexagonal tiles on the kitchen floor, and capacious farmhouse-style sinks with sleek modern fixtures. Although the couple called in Kevin Browne Architects for help with the layout and design, and relied on Island Cove Building and Development for aspects of the construction, they were able to keep costs low by doing much of the work themselves (and by sourcing from secondhand shops and junkyards). “We just like having projects,” Sarah explains. “When I don’t have something to do with my hands, I get a little antsy.”

They pulled down the walls themselves, ripping out horsehair insulation to expose the dignified beams underneath. They scoured thrift stores and flea markets for vintage appliances. At ReStore, they found a beautiful old gas range stove, which needed to be taken apart piece by piece, cleaned, and put back together. (“You need to bless it to get it to start,” Sarah jokes.) In the kitchen, they removed six layers of floor, scraped, sanded, and painted the hardwood, only to find out that it was insulated. They were forced to

rip the whole thing up and start again. “We have some really nice friends who come over and help with anything we need in exchange for beer and sandwiches,” Wesley admits; sometimes it helps to call in a few favors. “From March to June, we had a dumpster out front that ran the length of the driveway,”Sarah recalls. “We pretty much lived in one room while we worked on the rest of the house.”

“The first few days we were here, people would come by and ask, ‘When are the owners moving in?’” Wesley adds. “We’d say, ‘We are the owners!’”

Soon enough, neighbors got used to the industrious duo. One day, when Sarah was outside working, a kind-faced woman came by and asked if she would like to see her tulips. “I thought there would be a little patch in the back of her house,” she says. “But there were a thousand tulips, it seemed like, and a waterfall—this incredible garden.” The woman’s name was Flip Meyer, and soon, Sarah and Flip were trading house stories and tales from their travels. “She knew the entire history of our home,” she says. “I think she was just really happy that somebody bought the house and wanted to put a little love into it.”

Although the couple isn’t quite ready to say whether this is their “forever house”— they’ve moved around a bit, and they enjoy buying houses and fixing them up—they are pleased to have landed in such a welcoming neighborhood. “We never thought we’d be able to see the water,” Sarah says. “It’s kind of a dream come true.”

It’s also a boon for the youngest member of their family, 13-month-old Elle. “When we had just moved in and we were fixing it up, I was down on my pregnant belly painting the trim,” Sarah remembers. “That’s when I learned I could paint in all conditions.” Sarah gave birth while the house was still under construction—the day they installed a new stove, to be exact. “That night, we came home, and we’re using this big woodstove, and we didn’t know there was an exterior coating that had to be burned off,” Wesley says. “It started smoking and filling up the house. The fire alarm went off, plus the thermostat is in that room, so while the kitchen got really hot, the rest of the house plunged to like 30 degrees.”

But as they remember this stressful first day as new parents, they don’t seem bothered. “There are so many things you have to deal with on a day-to-day basis,” Sarah says. “You become really flexible. And luckily, we have
a kid who is really flexible.” They’re also flexible when it comes to divvying up work. “I hate painting—it’s the one thing I hate,” says Wesley. Sarah counters, “And I hate sanding. It’s the worst.”

“So we’ve learned to divide and conquer,” she adds. “Together, we’ll get it all done.” 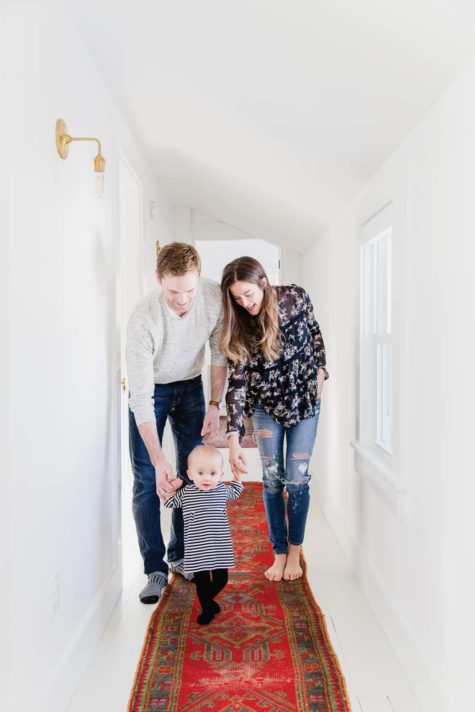 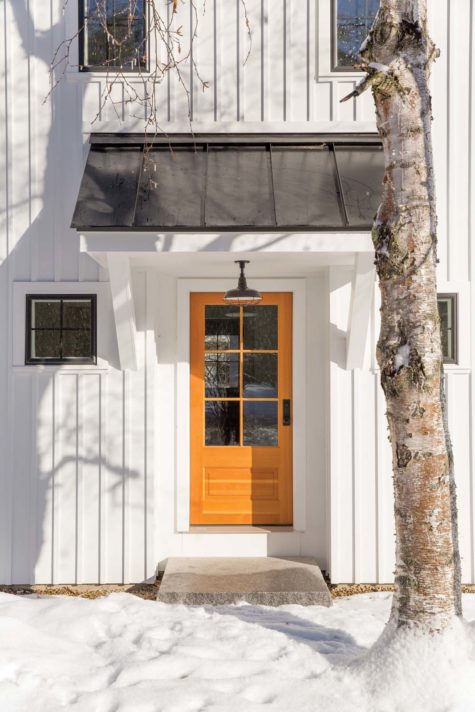 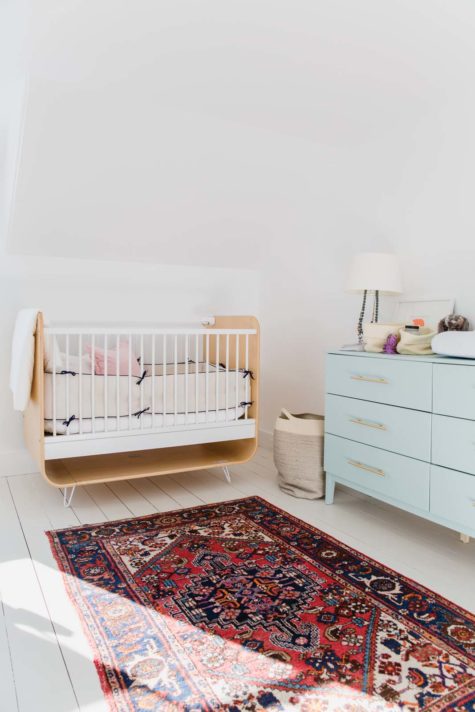