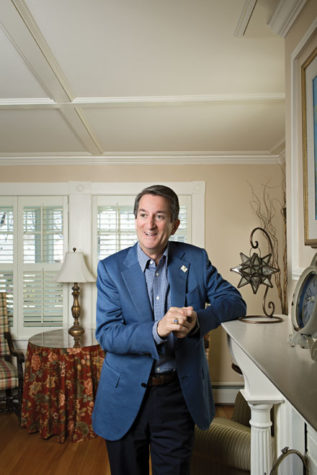 Donato J. Tramuto | CEO and Chairman of the Board of Physicians Interactive

Donato Tramuto and his partner, Jeffrey Porter, run Five-O Shore Road and the Inn on Shore Road in Ogunquit. In 2001, Tramuto was supposed to be with his friends on United Airlines flight 175, the second plane to hit the World Trade Center on September 11. “In tribute to them, I created the Tramuto Foundation, which has provided grants to support a number of nonprofits in Maine,” says Tramuto. In 2016, the foundation will have reached several milestones—the fifteenth anniversary and the goal of distributing one million dollars in total contributions. Tramuto is the CEO and chairman of the board of Physicians Interactive, an international mobile medical technology company. After the Haiti earthquake in 2010, Tramuto wanted to help communities that have limited access to health care, vaccines, and clean water. Using his resources at Physicians Interactive, Tramuto brought high-quality medical technology to Haiti and then Kenya and Uganda. A new venture has him providing this same technology to medical professionals in rural Maine. Tramuto was the recipient of the Robert F. Kennedy Ripple of Hope Award for his work with the Tramuto Foundation and Health eVillages, along with Hillary Clinton, Robert De Niro, and Tony Bennett.