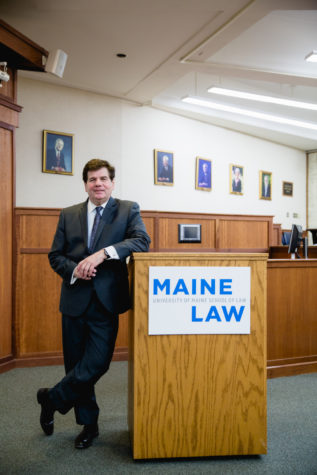 Dr. Charles Norchi is a professor of law at the University of Maine School of Law, where he teaches and writes about international law, law of the sea, and international human rights. Norchi was recently appointed university trustee to support his work on the Arctic for the 2016-2017 academic year. He founded and serves as the director for the school’s Center for Oceans and Coastal Law, a teaching and interdisciplinary research center devoted to law and policy of the oceans. “Maine Law is local, but it is also global. Our students study abroad, and foreign students and scholars come to us,” Norchi says. “When the foreigners return to their countries they take with them endearing and enduring connections to Maine. That is why I do what I do in Maine.” Norchi’s work often takes him overseas, lecturing and advising on his subjects of expertise in Europe, the middle East, and Asia. One of his proudest experiences was serving on the faculty of a Department of Defense training program called the Leader Development and Education for Sustained Peace Program, which entailed briefing service personnel at United States military bases just prior to their deployments to Afghanistan. The program provides graduate-level education on regional, geopolitical, and cultural issues. He says he often hears from former students, now veterans, who say they found the training helpful while deployed. Norchi is currently on the board of directors for the Harvard Club of Maine, the world Affairs Council of Maine, and Super-Max Inc., and is a fellow at the Explorers Club in New York City.