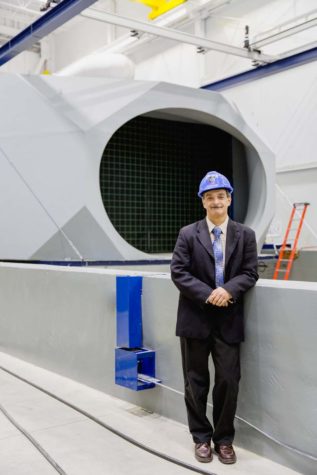 Director of the University of Maine Advanced Structures and Composites Center

“Whether it is an iPhone or a Tesla car, we live in a knowledge-based economy where wealth is created through higher education, by new ideas and new products coming out of world-class laboratories,” says Dr. Habib Joseph Dagher, founding director of the Advanced Structures and Composites Center at the University of Maine, where he is a professor of civil and environmental engineering. Since opening 20 years ago, the research lab has brought in $120 million in competitive research funding to the state and provided paid job training to nearly 2,000 UMaine students. The 100,000-square-foot lab is now the state’s largest university-based research and development center, seeking innovative ways to harness Maine’s largest natural resources: wood, wind, water, and the ocean. Last year, the White House honored Dagher as a Transportation Champion of Change for his work inventing an award-winning composite arch bridge system, known as the Bridge-in-a-Backpack. The lab has also developed a technology that provides soldiers with enhanced ballistic protection in their tents, and most recently, it partnered with NASA to develop technologies to land humans on Mars. One of its most notable projects is a floating offshore wind turbine, the first of its kind in the United States. The New England Aqua Ventus Project, led by Dagher, plans to build two full-scale floating offshore turbines and test them off Monhegan Island in hopes of developing commercial farms in the 2020s.