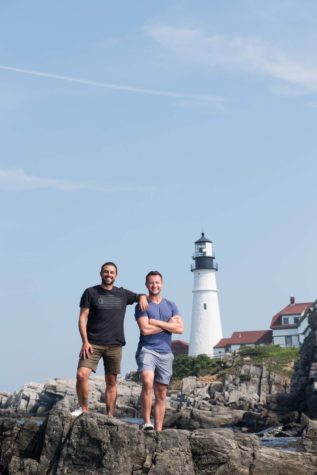 Sabin Lomac, left, and Jim Tselikis at Portland Head Light. The founders of Cousins Maine Lobster, they introduced their first food cart in Maine this summer at Fort Williams Park. 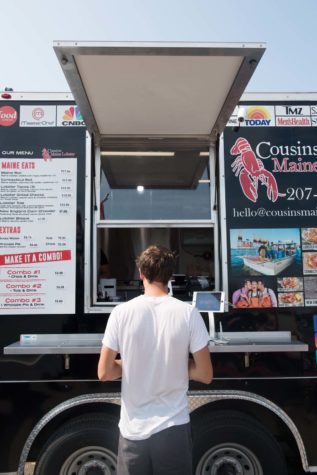 Waiting for an order at the cart at Fort Williams Park. 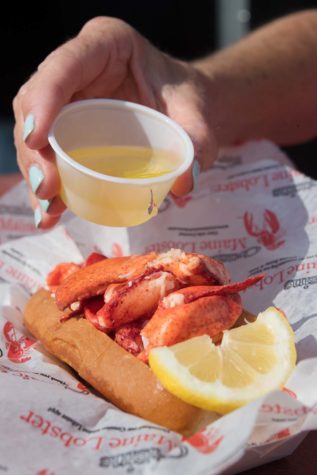 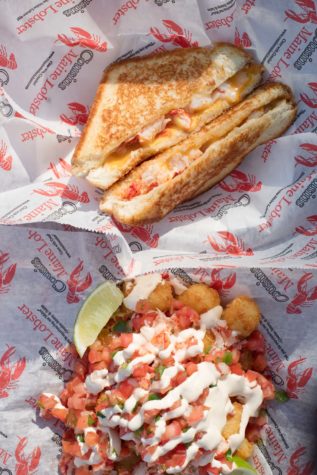 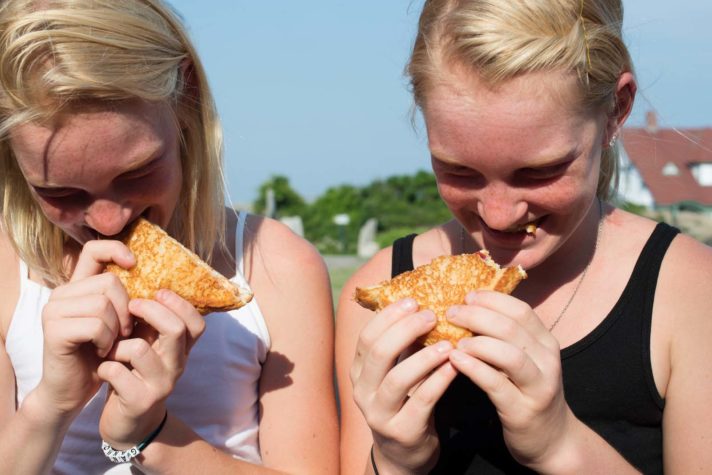 On a hot July afternoon at Fort Williams Park in Cape Elizabeth, cousins Sabin Lomac and Jim Tselikis stand on a sharply sloped boulder at the water’s edge, arms outstretched and wide smiles on their faces. Veterans of many television appearances and photo shoots, the men are in their element, hamming it up for a photographer while Tselikis’s wife, Maggie, balances a few feet away, gamely holding a flash on a tall pole. Lomac and Tselikis, founders of Cousins  Maine Lobster, are also right at home here—the  sprawling park on Casco  Bay near their respective childhood homes in  Scarborough and Cape  Elizabeth. Six years after launching their inaugural  Cousins Maine Lobster food truck in Los Angeles, they introduced their wildly successful brand to Maine this summer with a cart at Portland Head  Light, serving their signature lobster rolls, lobster tacos, and lobster tots— tater tots with warm lobster meat, pico de gallo,  and cilantro lime sauce— among other items. “We  didn’t want to start on day one in our own backyard, where there’s a plethora  of lobster, and everyone can find it,” says Tselikis. But 31 food trucks,  eight restaurants, and a  best-selling book later, the  timing finally seemed right. “We got the key to the city of Portland,” says Lomac. “It felt very rewarding that locals said, ‘These guys have done a good job representing us on a national and global level.’”

The cousins and I find a patch of shade and sit on the grass, shoes off. Friendly and engaging, they are on an extended break to visit family in Maine. Lomac, whose fiancée, Erika Hartounian, and baby son, Enzo, are in tow, has just wrapped the first season of his new Cooking Channel series, Seaside Snacks and Shacks, crisscrossing the country for alligator sliders on the Louisiana bayou and “campfire whitefish” in Michigan, along with local specialties: from the Shack in Old Orchard Beach, the Garage BBQ and Salty Bay in Scarborough, and Silly’s in Portland. A book, Cousins Maine Lobster: How One Food Truck Became a Multimillion-Dollar Business, was released in April, garnering positive reviews for the cousins’ lighthearted telling of their boot-strapping success story.

The tale begins in Los Angeles, where Lomac was living when he and Tselikis, who was working in Boston, decided to jump into the fledgling food truck market, investing $20,000 of their own funds to launch Cousins Maine Lobster. “The original plan was to start a food truck and break even, not lose money,” says Lomac. “I would stay in California and keep my job; Jim would stay in Boston and keep his job.” The first day the truck was in operation, 80 people lined up in the California sunshine for Maine lobster rolls, and the cousins knew they had stumbled onto something bigger than they expected. “The only intentional thing we did was sell Maine lobster,” Lomac says. “We wanted everyone to know where we were from—we’re very proud of that.” The name, intended to be a placeholder, stuck when they realized it told their story. “It speaks to exactly how we tried to recreate our childhood,” says Tselikis. “Which was summertime with our crazy cousins and everyone running around, our parents and too much chardonnay, and lobster.”

Cousins Maine Lobster buys all of its lobster from eight Maine buying stations it partners with; the meat is processed in Portland and shipped to the various locations, which as of August included a restaurant on the beach in Taiwan. The rolls are from New England–based Country Kitchen, and the whoopie pies are baked in Maine. “As we grew, we wanted to make sure that the logistics and the supply chain were buttoned up and very secure,” says Tselikis. Initially, the cousins did their trainings in California, but now they bring all of their franchisees to Maine to immerse them in the culture that is the heart of their business. “They see how hard it is—hauling ten lobsters up and throwing nine of them back,” he says. “They come to Jimmy’s house and sit in the backyard with his mom,” says Lomac.

For him and Tselikis, family is a recurring theme extending well beyond the close-knit circle of relatives that includes Tselikis’s sister, Annie Tselikis, the executive director of the Maine Lobster Dealers’ Association. Barbara Corcoran, the celebrity investor the cousins convinced to partner with them on ABC’s Shark Tank, is also considered family, says Lomac. Corcoran first visited the cousins in Maine to film some teaser footage before the October 2012 episode was scheduled to air. Lomac gave her a list of hotels, but said she was also welcome to stay with him at his mother’s house in Scarborough. Corcoran took him up on the offer. “We shot during the day, and at night we’d play Scrabble and drink wine—it felt like family immediately, and it’s only gotten stronger,” says Lomac.

The producers of Shark Tank had approached the cousins just two months after they launched their first food truck. Recognizing they needed mentorship, the cousins prepared for the show—in which entrepreneurs compete for investors—by watching 50-plus episodes and grilling each other with questions. Corcoran’s resulting $55,000 investment and her business acumen are “the gift that keeps on giving,” says Tselikis. “But we didn’t just focus on TV, we focused on the product and Maine and the story.” His sister has also helped them tell this story, connecting them to the lobster industry in their early years and keeping them up to date on developments. “We would call her: ‘Annie, we’re going on CNN; how should we talk about this?’” says Lomac.

We peel ourselves off the grass and wander over to the cart, where operator Mike Carmody, who grew up playing hockey with Tselikis, is serving a Connecticut-style lobster roll (warm, with butter) to a man from California who’s thrilled to have discovered his favorite food truck on his Maine vacation. He recognizes the cousins, and they happily pose for pictures with him and his two young daughters. “How is it?” Lomac asks. “As good as in Sacramento,” the man says. Tselikis and Lomac’s smiles widen. Consistency with a simple product—one that would be easy to get wrong, given the perishability of seafood—is a cornerstone of their success. So is the close, continuing connection to Maine, where each hopes to have his own home someday. “We happen to live near Hollywood in California, but we’re the opposite of Hollywood guys,” says Tselikis. “We’re just two guys from here.” 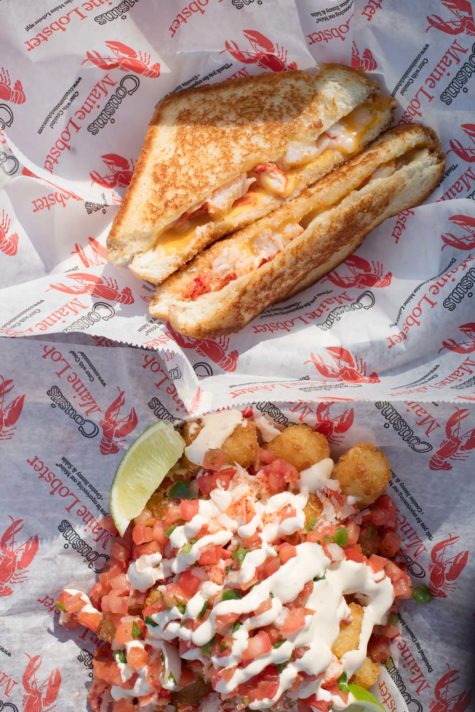 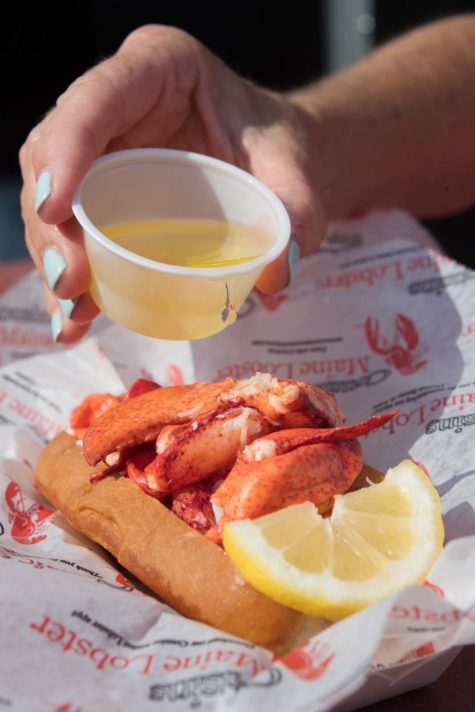