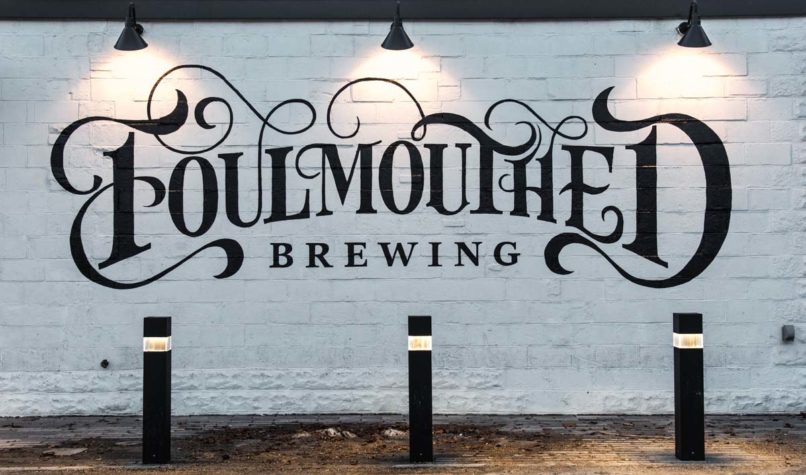 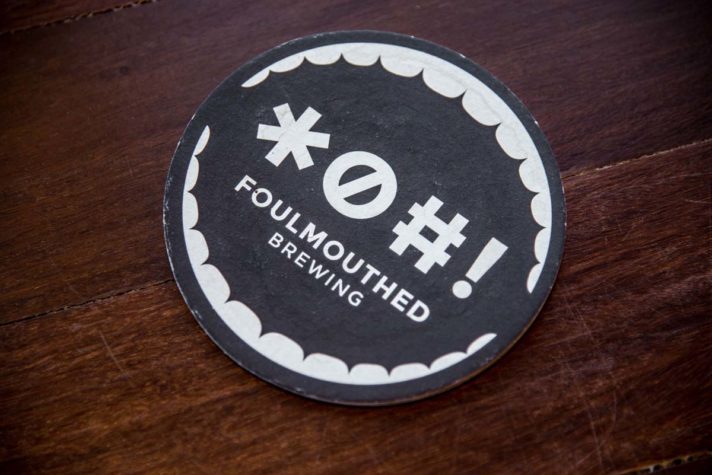 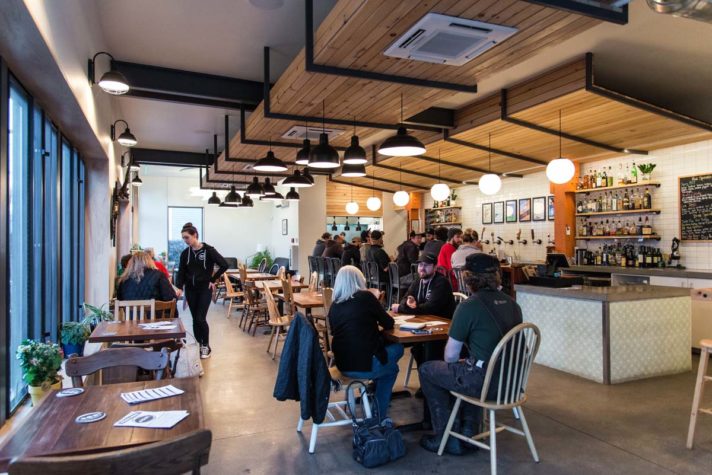 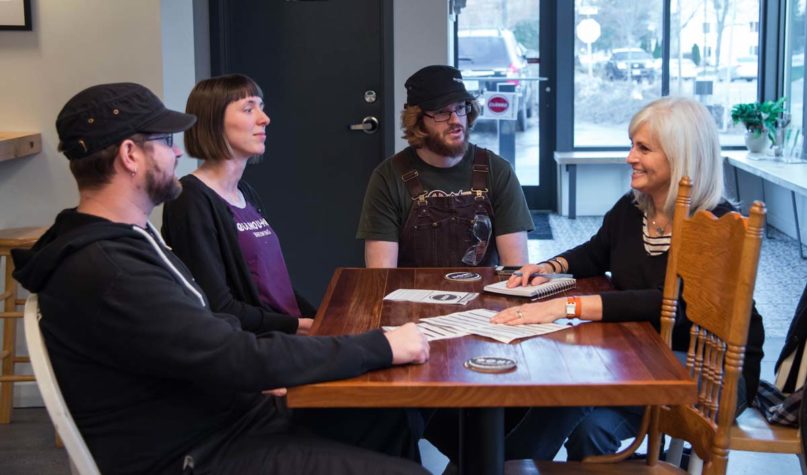 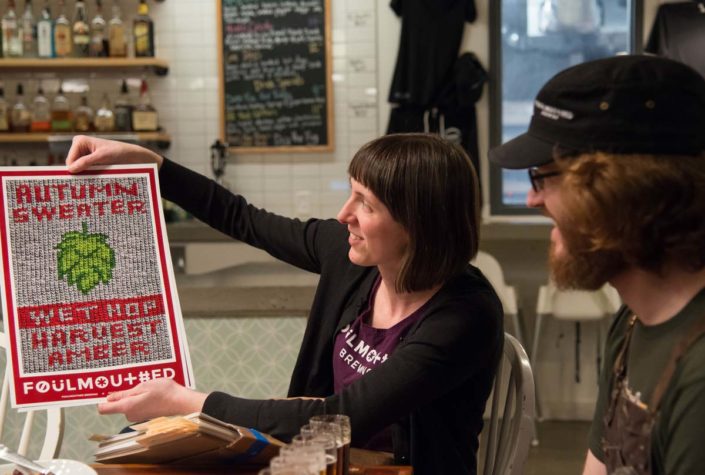 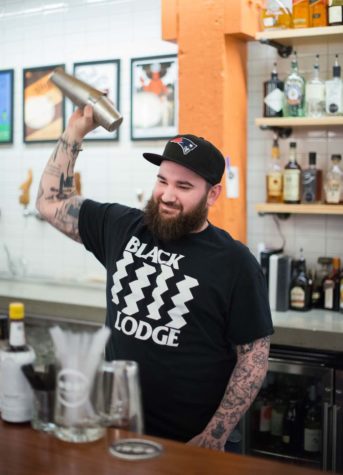 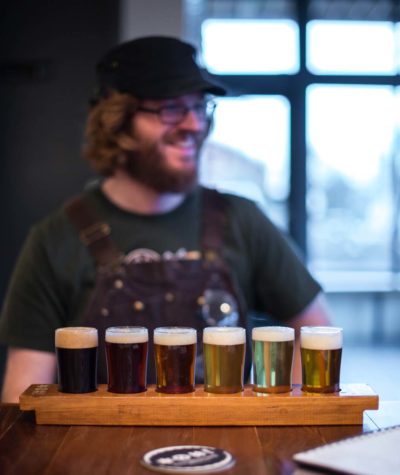 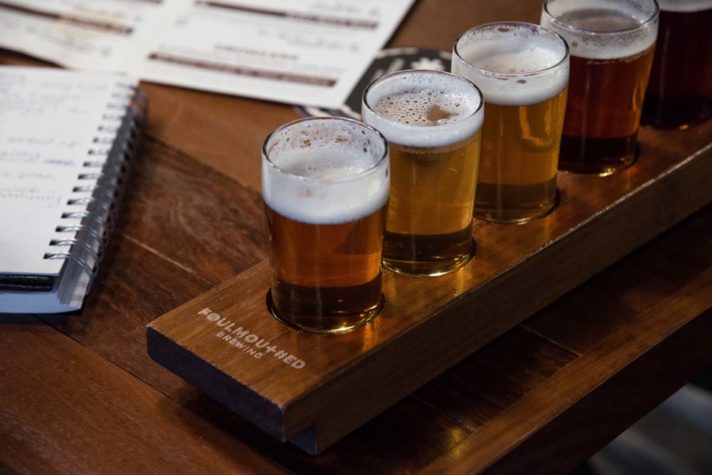 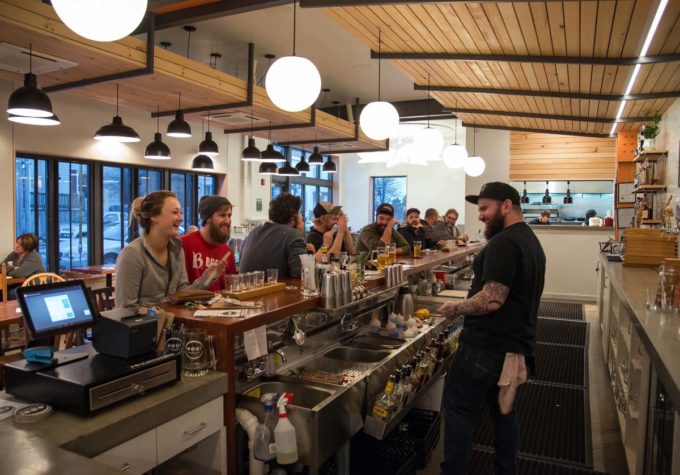 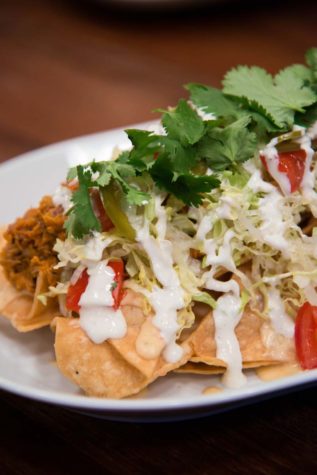 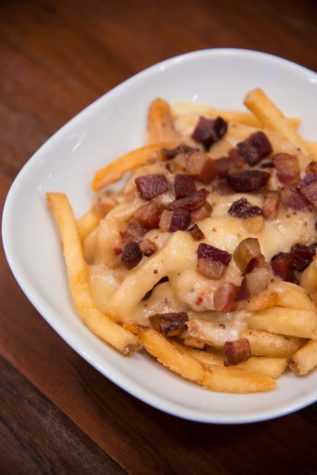 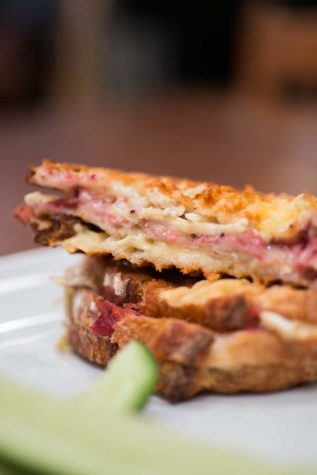 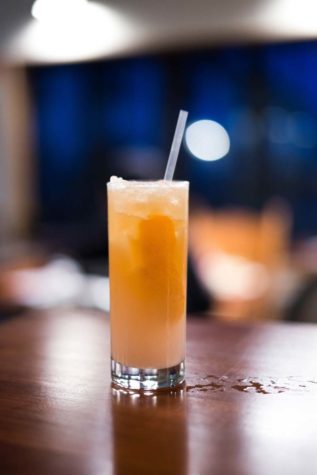 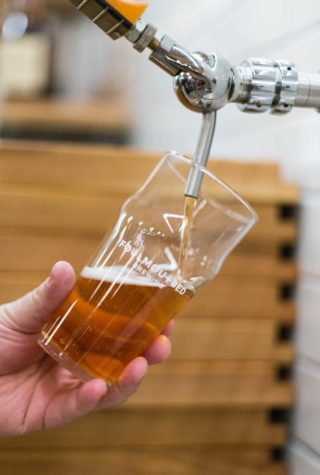 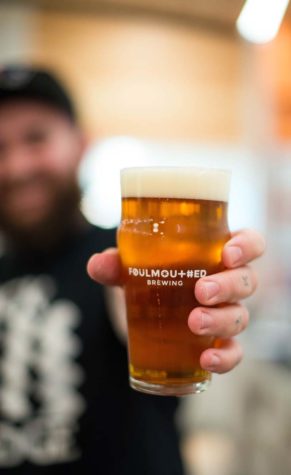 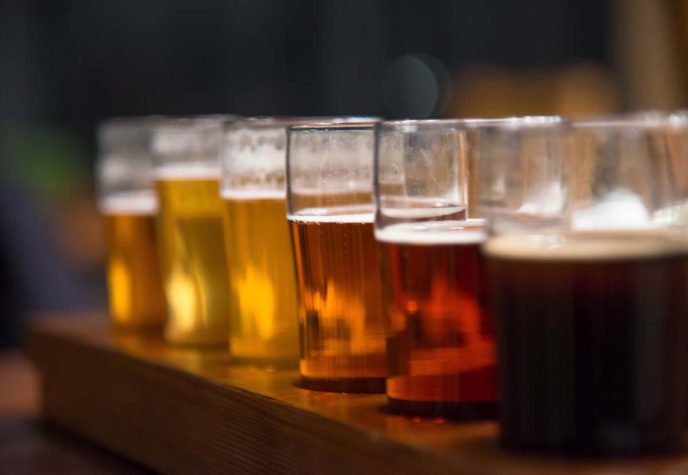 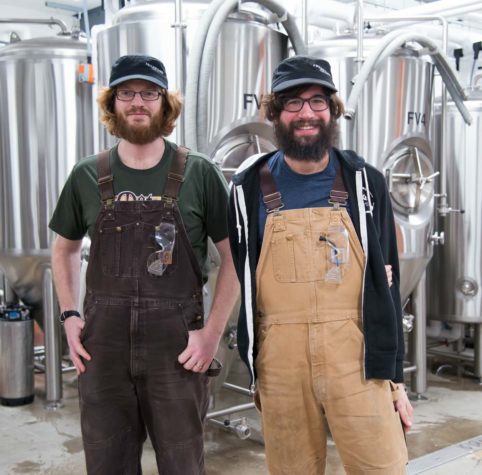 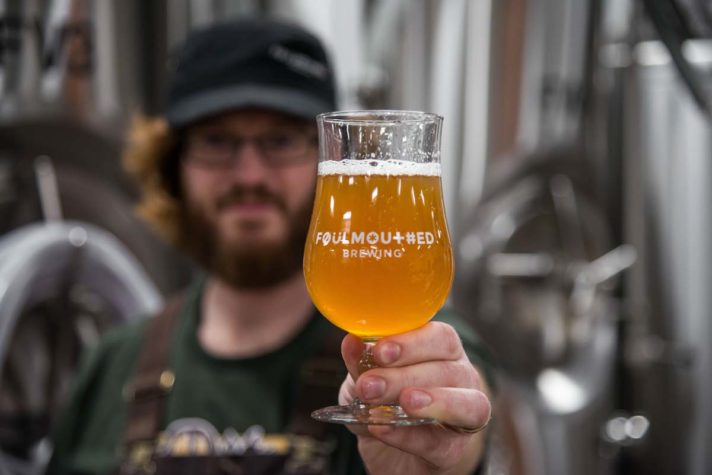 Craig Dilger is a beer geek, in the truest and kindest sense of the word. He looks the part, in brown work overalls with safety glasses tucked into the pocket, black-framed glasses, and full beard. “I’ve always been interested in any kind of craftsmanship,” he tells me, “the melding of science and arts. Brewing is an extension of that. It’s chemistry, biology, and a whole lot of heart.” Dilger is sincere and thoughtful about his chosen profession. He started home brewing while in college, and his passion grew even while he pursued a career in photography in New York, where he met his wife, Julia. She soon joined him in the home brewing hobby and the dream of someday having their own brewery.

Dilger went to work at Lively Brewing Co. at Ebenezer’s Brew Pub in Brunswick, where he could experience brewing on a larger scale. “The fundamentals are all the same,” he says. “The equipment and the risks are different. I learned a ton there.” Dilger took what he learned at Ebenezer’s, adding it to his own vision for craft brewing, and, with Julia, opened Foulmouthed Brewing last June. The former auto body shop and storage space is located in the Knightville neighborhood of South Portland, almost in the shadow of the Casco Bay Bridge. “It was in total disrepair,” says Julia. A month-long trip to Scandinavia, where the couple gained an appreciation for a light and spare aesthetic, inspired the renovation. “We had a vision,” she says. “It needed to feel very clean.” The couple worked with Leslie Benson Designs of Portland to fulfill that vision, with white walls, white subway tile behind the bar, and slatted wood canopies to create warmth. The brewery takes up two-thirds of the space, and the rest is devoted to the bar and dining room.

On a recent afternoon, the bar was occupied by a lively crew from Warren Construction, who had worked on the project. “We have a good mix of customers,” says Julia. “Lots of South Portland locals, both older and young professionals. We also get the beer geeks who come over the bridge.” Dan Lindberg joins us, and Julia introduces him as “our culinary evil genius.” The chef seems to like that title. Lindberg came from Hugo’s, where he picked up a deep appreciation for local, seasonal food that he’s carried with him to the kitchen at Foulmouthed. The move from fine dining to pub-style food was the right one for the chef, who loves sandwiches. “They’re a vehicle for flavors and texture,” he says. He’s particularly enamored with grilled cheese, a menu item that changes often. Right now, it’s a triple-layered affair with brie, smoked onions, and a cranberry-pepper compote. Another specialty is the hand cut fries, available with a variety of house-made sauces, including Dilger’s favorite, smoked pepper mayo. The fries are the base for a decadent bowl of poutine with gravy made from stock using the bones of Lindberg’s pulled pork. You can find the pork in a meaty sandwich or on an enormous platter of nachos. “Food follows beer,” says Dilger, and Lindberg has developed a menu that complements the brewery’s offerings well.

Since opening last June, Foulmouthed has produced over 30 different beers. “We’re constantly tinkering,” says Dilger. “That’s the fun part. We’re not brewing traditional styles. We like to carefully break the rules.” I confess to Dilger that I’m not much of a beer drinker, and he immediately rises to the challenge, ordering a four-by-six flight, a sampler of all six of the current beers available in 4-ounce glasses. The first one, Brat, is “a beer’s beer” and often gets used in by Lindberg in cooking. The next two, Golden Bullet and Tri Force IPA, are pale ales.
When we reach the fourth beer, Dig the Fig, I’m starting to get interested. It’s a little fruitier and the others and smokier, too. Dilger tells me it’s brewed with 50 pounds of figs. The fifth, Dead Flowers, is the answer I’ve been seeking. It’s a Belgian style red ale with “a toffee and caramel malt backbone.” “So you like a malt-forward beer,” Dilger says. Now I know. But it’s a beer cocktail made by bar manager Jeff Hodenberg that turns out to be my favorite drink. Ocean Street Urchin combines Brat with blood orange liqueur, light rum, ginger syrup, lime juice, and Peychaud’s bitters. “There’s no rich history of beer cocktails,” says Hodenberg. “It’s all trial and error, and I constantly have to adapt to what’s being brewed. But I want all kinds of drinkers in here.”

As Dilger shows off his brewing room to us and excitedly talks about the next batch, I ask him, “Is this your dream?” The look on his face gives away his answer, and he enthusiastically replies, “Yes!” 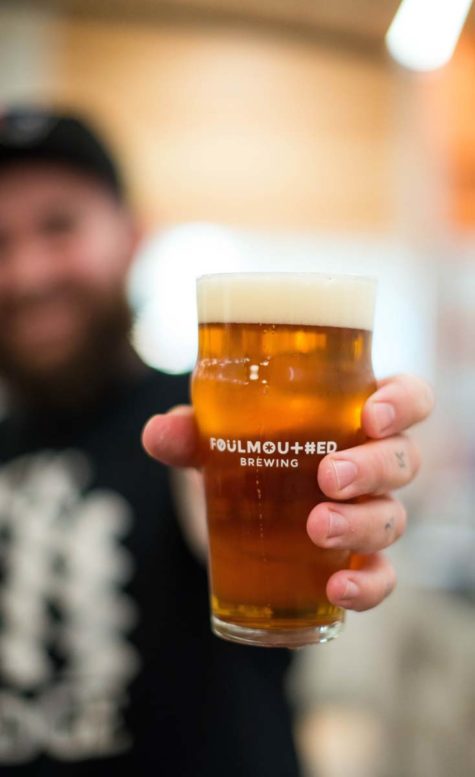 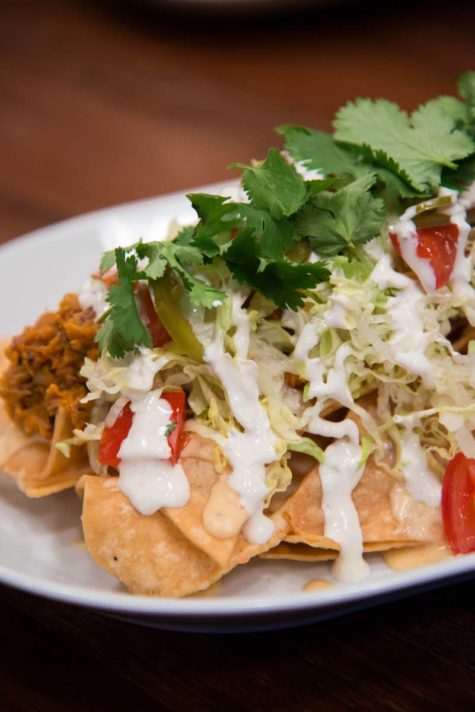