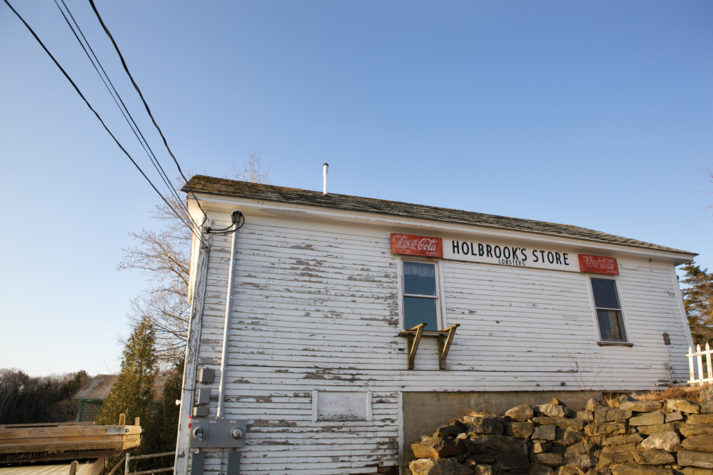 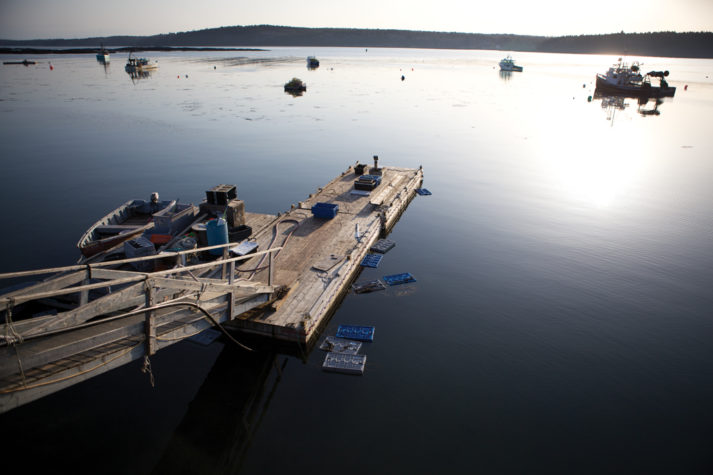 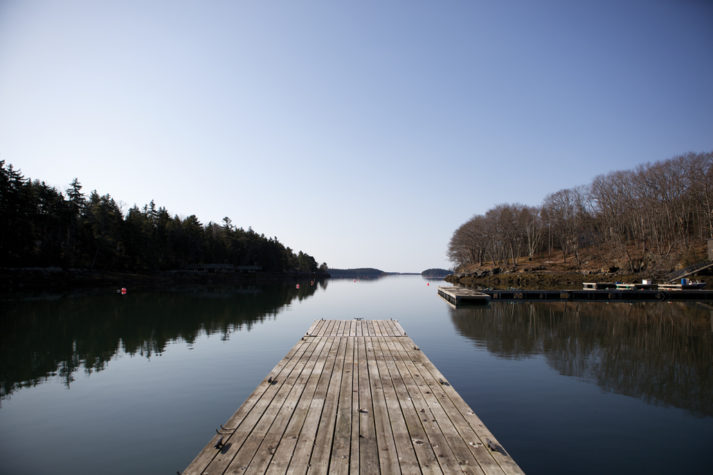 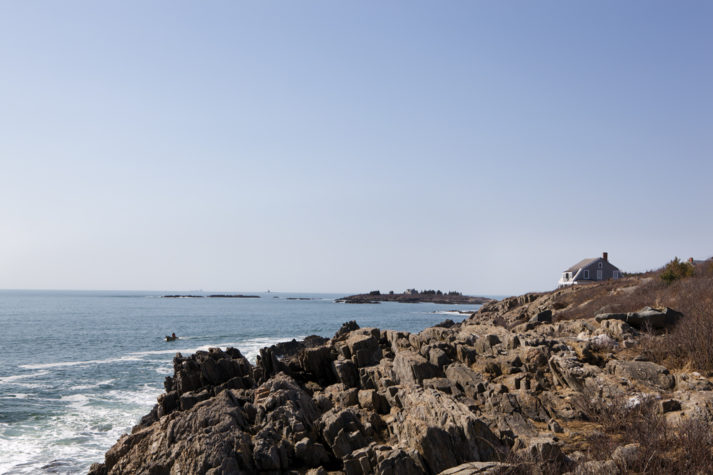 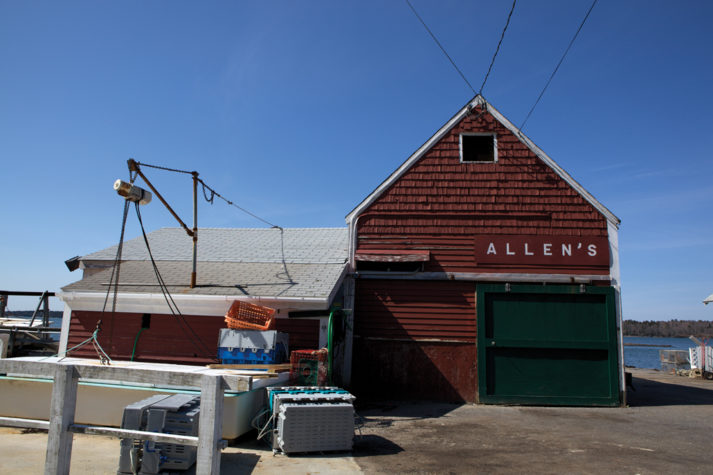 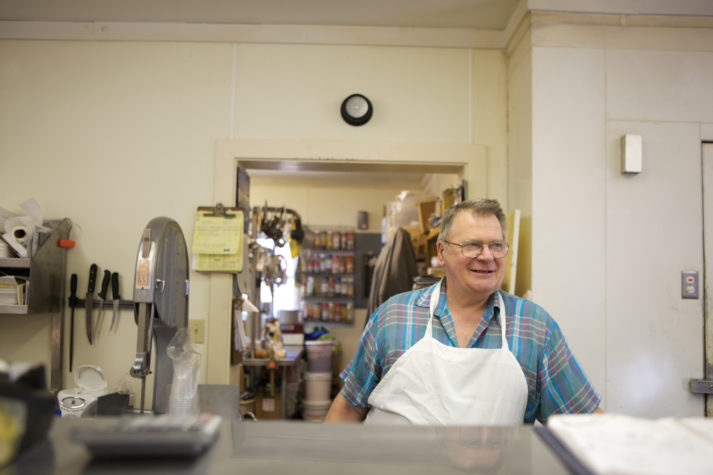 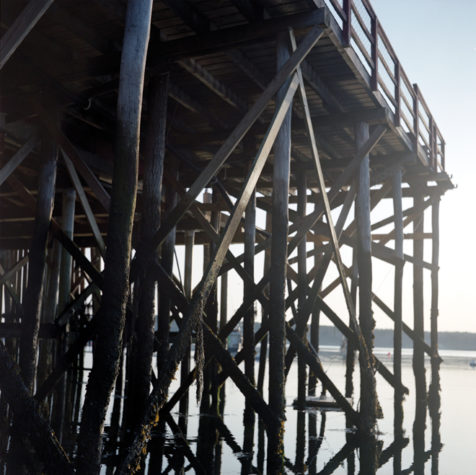 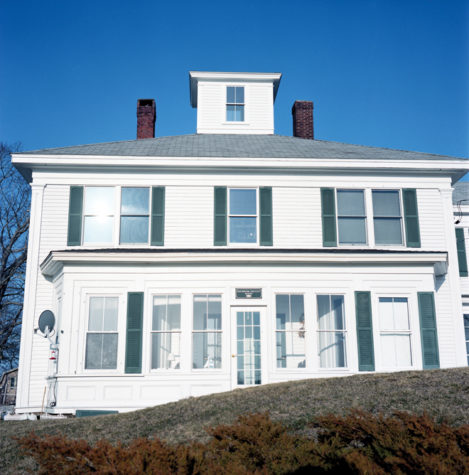 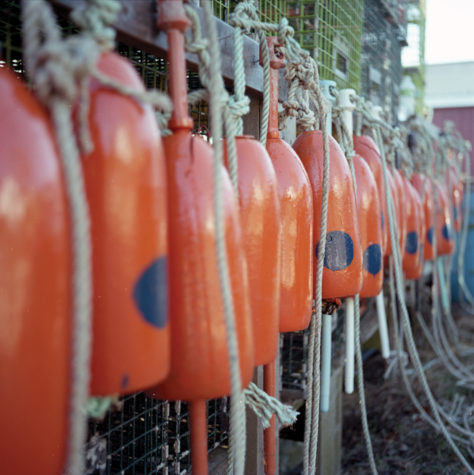 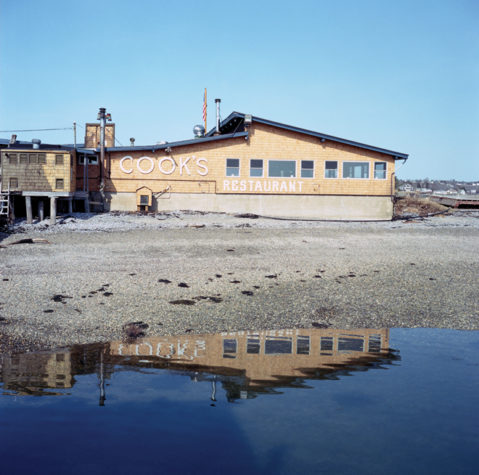 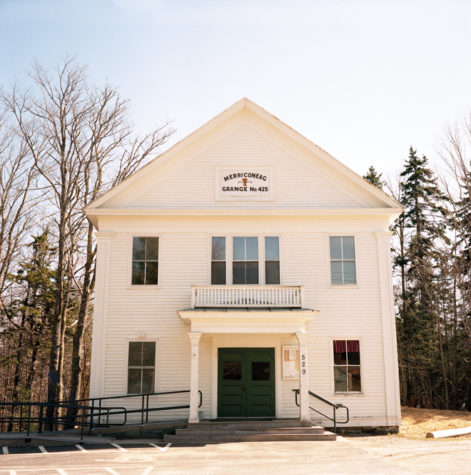 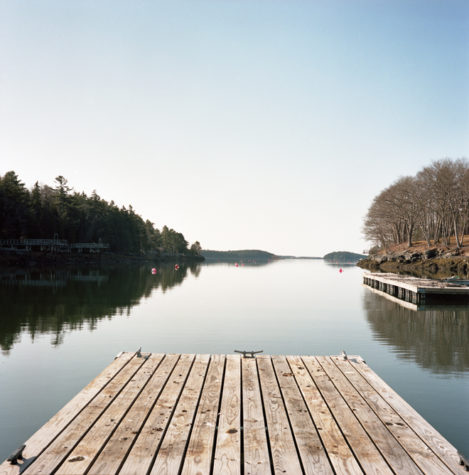 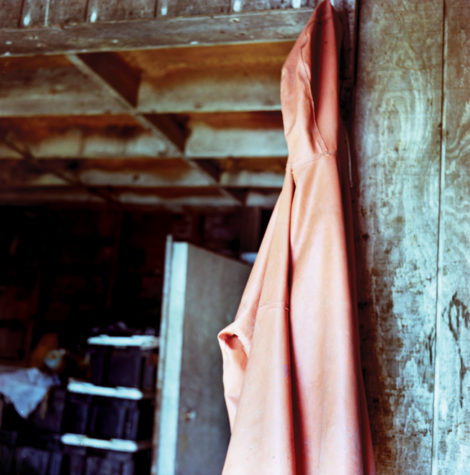 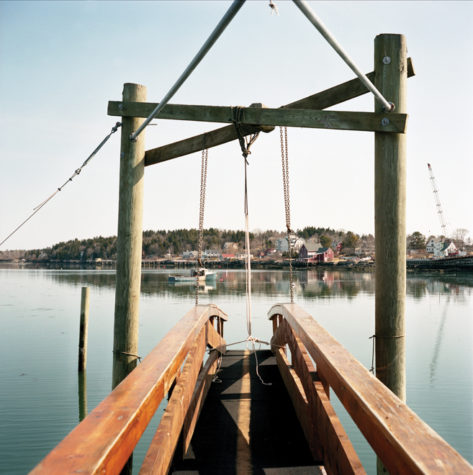 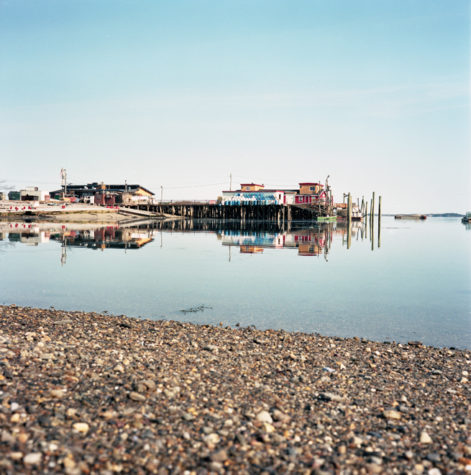 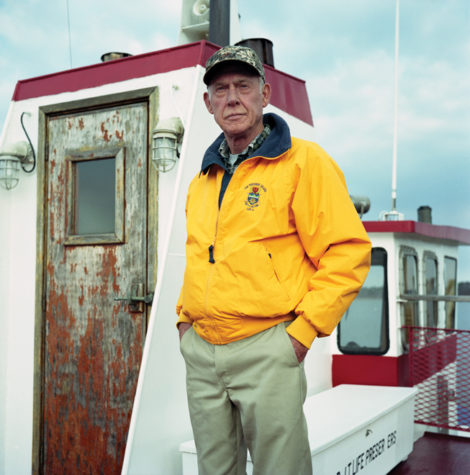 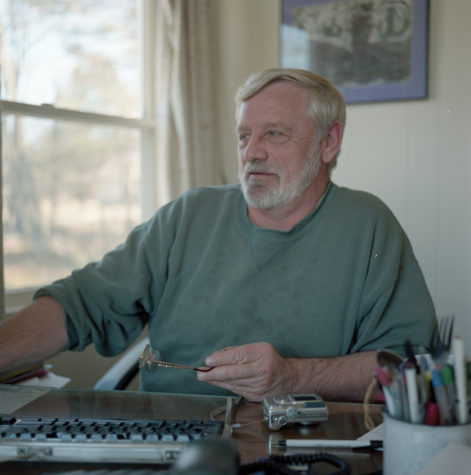 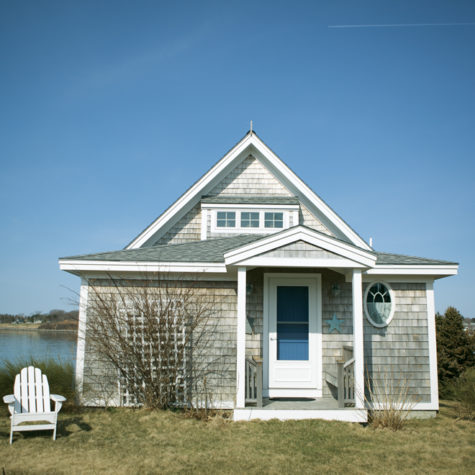 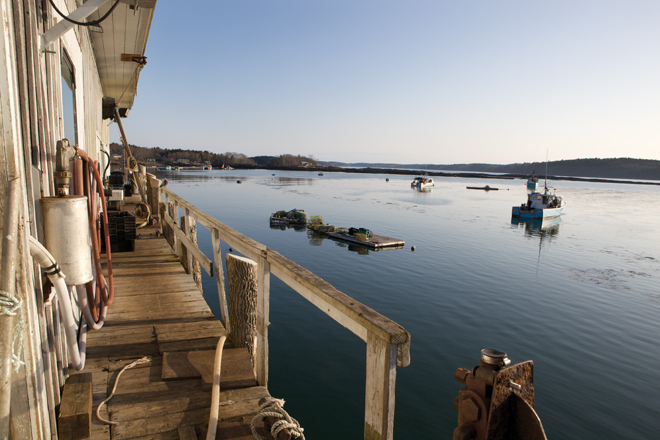 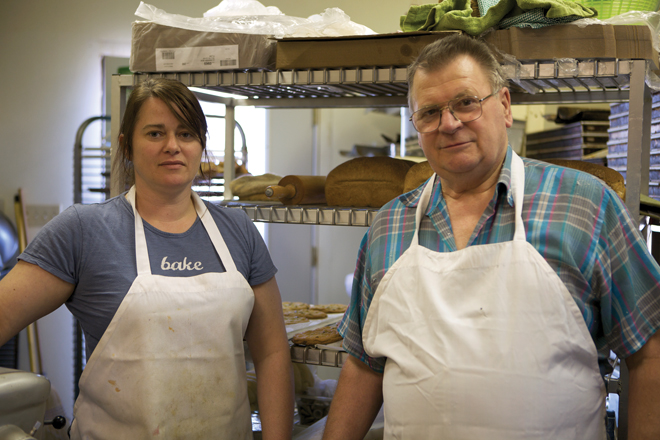 Ray Tetreault and his daughter at the Veggie Corner

Two peninsulas stretch into Casco Bay, forming an irregular coastline of clam-flats, deepwater harbors, and the well of a giant, imaginary harp. Cross the harp’s well—Harpswell Sound—by boat in no time. But go from Land’s End to Cook’s Corner and back down Potts Point, and you’ll spend hours rolling by long stretches of granite and pine woods and no-nonsense front yards.

To the west lies Harpswell Neck, which winds down from Brunswick through Harpswell Center to South Harpswell. The eastern peninsula is a string of three islands—Great, Orr’s, and Bailey—connected by bridges. “The other side” is the peninsula you’re not on. If you’re headed to “the islands,” you’re headed to Orr’s or Bailey rather than one of the 47 offshore islands.
The land divides endlessly. Peninsulas, islands, headland. People live in Lowell’s Cove, Basin Point, High Head, each a micro-community unto itself. The town has three libraries, three post offices, three fire departments, and two elementary schools. Its sprawling, disconnected topography defines Harpswell.

“No one says they are from Harpswell,” says Robert Anderson, a native of Cundy’s Harbor and publisher of the Harpwell Anchor. “We’re a divided town. Always have been. East and west, them and us. My grandfather is Henry Allen of Allen’s Seafood. We used to come over to South Harpswell from Cundy’s Harbor to visit. You planned on an all-day trip.” Up to the big city lights of Brunswick, then down again.

The 5,000 far-flung citizens of Harpswell converge at the hours-long annual town meeting (last year’s lasted eight hours, a record), where passions run high. They run into each other at the town dump on Mountain Road, a byway—a harp string—whose bridge connected the two peninsulas in 1973. Before that, if you had relatives on one peninsula of Harpswell and you lived on the other side, you might not see them except on holidays. If at all. Harpswell is the closest you can get to Portland and still feel like you are downeast.

A Harpswell Microcosm
Lookout Point Road, off Route 123 on Harpswell Neck, is Harpswell in miniature. Worn-out farmhouses surrounded by vehicles in all states of repair give way to prefabs, lobster-trap spreads, a yurt with stovepipe, the stately, historic Harpswell Inn perched (since 1761) on a broad, manicured lawn. Descend the sharp hill to Allen’s Seafood. Lobster wharf, bins, hooks, and elevated fishing boats await the new season. Along the half-mile road, practical abuts luxurious. Funky mingles with refined.

The human mix scrubs fresh and primordial at narrow Lookout Point: water on three sides, primitive boat launch, Portugal just over the horizon. No one in sight. The lustrous sea as it was a millenium ago. A trio of pointed firs occupies an islet twenty steps away at low tide.

In July, put in a kayak, aluminum boat, or dinghy with sail. Exchange glances with the fishermen or cormorants before pushing off for a Casco Bay island. Contemplate a seafood dinner when you return. Sustenance is just around the corner. Eventually everyone ends up at Veggie Corner, a cottagelike shop at the junction of Mountain and Harpswell Neck roads, a mile north of Lookout Point. “Little Switzerland,” Debbie Johnson of Doughty Point calls it. It’s accessible to both sides. Neutral territory. Everybody’s got to eat.

The Other Side
Mountain Road, the great connector, winds past Black Sheep Wine Shop and its low-ceilinged burrow of bottles, cheese, chocolates; past the town dump, its nine recycling bins a point of municipal pride; across the bridge spanning Ewing Narrows, to get to Harpswell’s other side. Dark, distant islands arise from steel-gray water.

Head north and east for Cundy’s Harbor. Watson’s General Store, operating since 1850, sells modern marine supplies between walls covered with nautical antiques. Sunday mornings in the winter it’s open to everyone for donuts and coffee in front of the woodstove. Fishermen and their families come to hang out. Darlene Watson helps to run the place; son T.J., a sixth-generation lobsterman, works off the wharf outside.

Fishing represents a large percentage of the jobs in Harpswell. Faced with a private sale threatening that livelihood in Cundy’s Harbor, a group of citizens raised $1.2 million and in 2006 purchased the four-acre Holbrook property at the water’s edge. In an arrangement unique in Maine, the Holbrook Community Foundation is now the nonprofit
owner and manager of a mixed-use waterfront: wharf, grocery, snack bar, store, and the Civil War–era Holbrook-Trufant House.

The Newspaperman
Harpswell Center is a misnomer; there is nothing central about it. It’s on the west peninsula. It bears a timeless quality, as does much of Harpswell. The bend in the road is home to church, scout hall, historical society, cemetery, small park, and Anchor Publishing, Inc. Here, in a tidy, two-room cabin, Robert Anderson publishes his free monthly newspaper, the Harpswell Anchor.

The paper, which the former lobsterman started in 1998 when his back gave out, has helped to unify the town, he says. It gets to every mailbox. The many letters to the editor are all over the map, geographically and opinion-wise. Citizens stop in and speak their minds—on the status of snow removal, the town budget, marital problems, boredom. He listens. Anderson says, “I’m Lucy in Peanuts without the nickel.”

Every issue, in addition to news stories and features, includes a column called “You Might Be a Harpswellite If…”

Grabbing a hot dog at town meeting is your idea of eating out.

Your pickup is two-toned: primer and rust.

You know the CMP power outage number by heart, but have to look up your mother’s.

Fun stuff, but it’s only part of the story. The people of Harpswell are as varied as its coastline is long.

Up the road at Veggie Corner, sports cars sidle up to pickups on the gravel outside. Inside, Ray Tetreault butchers meat and stocks the bins with local produce. He knows everyone by name but is careful to stay out of town politics. Clammers and executives, academics and artists, lobstermen and retirees from just about every cranny of this expansive municipality—whether they know each other from town meeting, the Little League field, or the annual bean-hole supper—find they can agree on something.

Right here at the crossroads of Harpswell, at the steam table under everyone’s nose. Violet Tetreault makes one mean pot of soup.

Everybody’s got to eat.