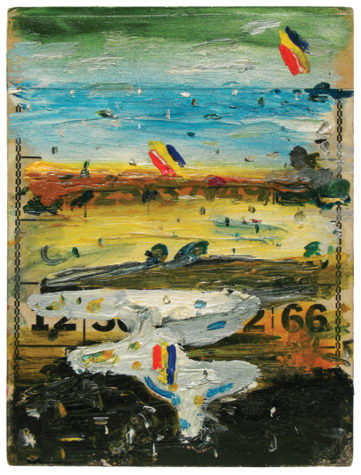 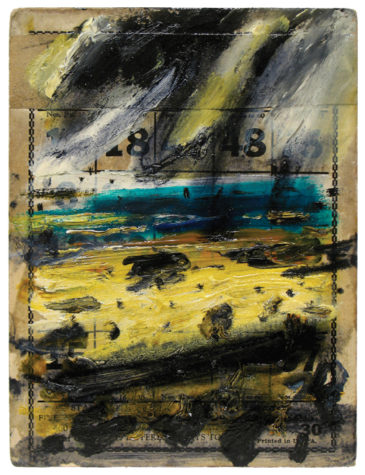 John Walker paints Seal Point, on the coast near South Bristol looking out at John’s Bay, and he paints only when the tide is out, when he finds the view more interesting.

Born and educated in England, Walker, whose work is in the collections of major British and American museums, first came to Maine in 1970. Like J. M. W. Turner, Walker understands landscape as movement and emotion: turmoil and fear, exhilaration and peace. He lays down oils in gritty swaths and slabs, translating energy into brush marks. Even dry, the thick paint glistens in the light. Walker’s paintings pounce on the elusive, expressive moment; they catch the changing world.
Walker possesses Seal Point. He’s produced large oils and hundreds of tiny studies painted over old bingo cards that he found stacked in a corner of a building he had bought for a studio. Random numbers, lucky juxtapositions of light, tide, wind—bingo!

Seal Point Series #V VIII
This image could read as abstract. Bands of black, yellow, and blue obscure the bingo numbers. But a place and an event emerge. Violent brushstrokes make fast-moving clouds, black swirling with gray, white, and yellow: lightning, the feathery fringes of the storm. Dense rain pounds the foreground. The ocean is indigo, but in the distance a turquoise band marks sunny water: the edge of the small storm.

Seal Point Series #V XVII
Seventeen bingo cards later. The weather has cleared, clouds have diminished to a green band along the top, and the wavy bay shines clear summer blue. The sun sparkles on the water: prism flags, bright banners of primary colors hoisted on the surface of the painting, claiming light as their territory.

Walker says, “I want to be the painter who knows more about that one place than anybody in the world.” His brushstrokes evoke a place: rocks, ocean, tidal mud, islands, a place shaped to his eye and emotion. Though not rendered literally, it becomes specific and intimate: his own.