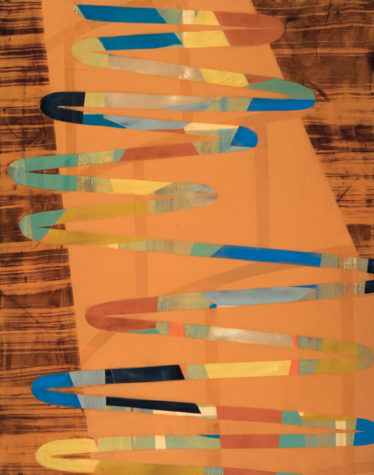 A painting by Garry Mitchell is like a visual monologue, a playful mix of shapes, complete with asides, digressions, and brilliant observations, all pulled together with painterly bravado. How he does this, how he invents movement and tension in abstraction, is only partly due to his sure eye for balance—between color and form, line and empty space.  Born in Florida, Mitchell went to the University of Hawaii, earned a graduate degree from the Pratt Institute, and has been awarded residences at Yaddo and the MacDowell Colony. Now he teaches at Colby.  But right after high school, before Mitchell got serious about art, his father gave him a ticket to Hawaii. That was the beginning, he says, of “ten years of living the surfing life.” Maybe that’s the secret: Mitchell’s paintings emerge as a combination of practice and luck, each canvas a calculated risk. The result is a wild and exuberant ride.

“Caffeine River is colors recovered from an earlier painting,” Mitchell says. “Sometimes I’ll pick up an old painting, roll a layer of paint over the surface so it becomes a field again, and bring everything back into play.
I excavate new shapes with paint thinner.”

Each layer of work, each arrangement of shapes, leaves traces in the finished work. Striations like wood grain, a wide, erasing swath of pale pink, a grid: all these marks float under the surface, incorporated or contradicting the pattern, which meanders and shifts like a bright and complicated river.

Vivid blue and green, bright red—colors collide and mix like braiding currents. The delight in this painting comes from its intricacy, the contrast between random juxtapositions and disciplined form.

“An image on a portable surface is one of the most efficient ways of making a point,” Mitchell says. Whether abstract or representational, for Mitchell painting is “about resolution—formal constraints.”

Spilled coffee?  Stream of consciousness?  “Everything I do has some basis in observation,” Mitchell says.  The energy of the painting comes from the refraction of observation into energy, into fleeting, mesmerizing shapes.  Like the ocean, these paintings seduce with the possibility of infinite change.