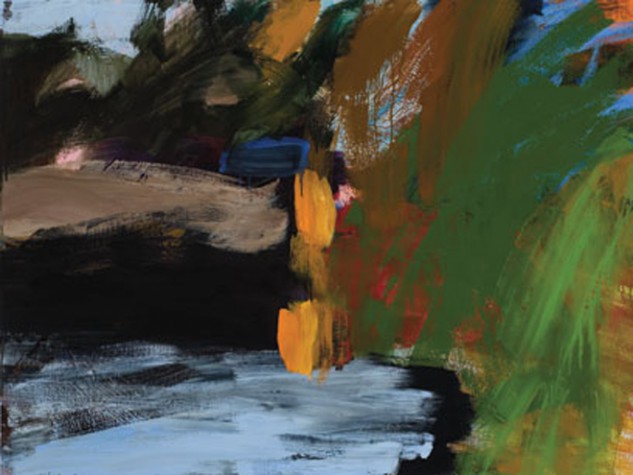 Elise Ansel paints one image on top of another, turning the canvas as she works, transforming sequences of ideas and sensations into lush and shimmering rhythms. She stacks images like words; her paintings are thick with references and with narratives. The tension between what she describes as “the way you think and the way you see” gives her work its power. Ansel renders story—events and feelings—in passionate shapes and colors.

In college, Ansel studied comparative literature, but then she “took an art class and fell in love with it.” After graduating, she returned to New York, where she grew up, worked on films like Ghostbusters 2 in the art department, then as a painter’s assistant. She earned a master’s degree in painting at Southern Methodist University. Now she lives in Brunswick and teaches at Brown University, her alma mater.

“I begin with an image,” she says. “It could be a cell-phone snapshot of my kids, a photograph of Afghanistan in the newspaper, a painting. There are many layers and paintings underneath the final surface, and something begins to happen with the layers. In Bridge 2, it’s the way the ochre reacts to the blue, the cadmium green to the red.”

Each bold brushstroke is laden with suggestion: a slash of ochre is turning maples reflected in the ice-blue river, the bridge a horizontal gray swath against the black mass of a building. The painting feels like an inspired improvisation. Ansel says: “I paint the relationship between our interior lives and the outside world.” As she works, she’s thinking: “What horrible things are happening in Afghanistan? What are we having for dinner? What paintings have I been looking at?”

Bridge 2 began with a bridge over the Androscoggin River that Ansel can see from her studio window. “When I finished,” she says, “I realized that Corot and Cezanne were in this picture.” Her painting becomes a metaphorical bridge connecting the present to two nineteenth-century pictures of bridges: Camille Corot’s Bridge at Narni, a romantic vision of a Roman aqueduct in the Italian countryside, and Paul Cezanne’s angular and mysterious Bridge at Maincy.

In Ansel’s work, shapes and colors collide like dissonant voices, then resolve and cohere into surprising harmonies. They are not quite abstract; each brushstroke conjures a reality. Ansel paints the passage of time, the quick flow of consciousness, the slow changes of landscape: abiding, beautiful patterns of life.