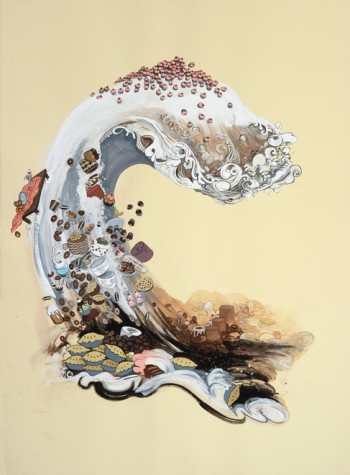 This tsunami looks yummy, thick and foamy as whipped cream. It’s a sugar high of a wave, and cupcakes—a batch of high-calorie surfers—ride it, catching its luscious curl. But look closely: the confections are being smashed and swallowed by the water; they’re disintegrating into muddy chocolate sludge. Maybe this vision of sugarplums isn’t so sweet. Justin Richel doesn’t intend it to be—those pies and parfaits, tortes and cookies are there only to tempt you, to makeyou think the wave might be fun. Richel moved to Rangeley from New Jersey when he was thirteen. After graduating from Maine College of Art in Portland in 2002, he received two fellowships at the Fine Arts Work Center in Provincetown, Massachusetts; in 2007, he moved back to Rangeley. In his art Richel has concocted a vision that is both dangerous and alluring—kind of like those desserts. The stylized wave is delicately and intricately rendered, a reference to the famous nineteenth-century print The Great Wave at Kanagawa by Katsushika Hokusai. But the differences are as important as the similarities. This wave has an energy of its own, rising from Richel’s imagination, not a deep blue ocean. The longer you look, the more it resembles a snub-nosed fish—part dolphin, part hallucination—that gobbles up the tempest-tossed food: a commentary on waste and our precarious, seductive civilization. “I think of each one of those little desserts as a stand-in for a figure,” Richel says. “As a society we can make something very beautiful and very destructive. This is a confectionary garbage heap, drenching the land and soaking in. It’s beautiful and scary. I was sitting with that tension.” Tsuweetnami is part of a series that Richel calls Sweets. Most of the other works are starker than this one: a column or a rising spiral—until you get close enough to see that these pared-down shapes are built with ice cream sundaes and cakes and cookies. “I try to create a modernist image,” Richel says of them. “But I can’t stop. I have to keep cramming detail in until it’s finished.”This fruitful tension fuels all of Richel’s work: on the one hand, his desire to simplify and judge, and on the other, his impulse to revel in and record all the details of our voluptuous, visible world. His appetite—his discipline—keeps us coming back for more.