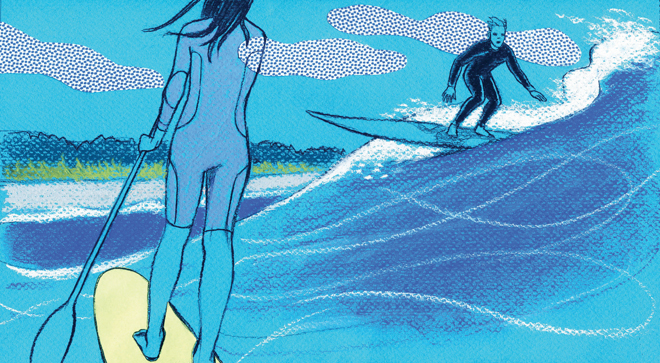 I’ll admit it: I’ve been drawn to the idea of surfing for a long time because there’s something rugged and sexy in the act of grabbing a board and paddling it out to sea.

My heart frolics a little every time I see a car kitted out with racks and boards. And, because I’m a Mainer, I find it extra alluring when I see someone paddling out in February, in a snowstorm. But the flip side of my roadside romance is the fear of drowning, freezing, suffocating in my wetsuit, getting hit in the face by the board, or being attacked by a shark. Despite the fact that every surfer I’ve ever met has been open and warm, surfing can seem, to the uninitiated, very clubby and inaccessible. It also feels dangerous, especially in Maine, where the ocean is formidably cold and dark.

So why should you try it? If you’re already a surfer, you know the answer. If you aren’t, here’s why: Clocking time in the gym certainly has its place, but when you only work out your body, the mind often checks out, which leaves out a crucial part of the wellness equation. If you are not completely present when you’re surfing, both physically and mentally, you end up boiled in the chop. Also, surfing is fun, and we pleasure-seeking humans are more likely to repeat activities we enjoy. I have friends who say that learning to surf saved their lives by reeling them back, almost magically, from crushing depressions, injuries, or ill health. It’s a religion for many surfers, and because it’s stimulating, humbling, and brave, they go out in all kinds of weather, in every season, just to get wet.

One of those veterans is restaurateur and surf coach David Turin (owner of David’s in Portland and David’s 388 in South Portland). David moved to Maine from Toledo and learned to surf when he was 35. He started the original New England surf camp for kids at Scarborough Beach (surfcampme.com), which has taught more than 1,700 adults and kids to surf on the coast of Maine. Turin knows the benefits of the sport intimately. “Running the restaurants is my passion, but it is incredibly stressful work and it would have put me under a long time ago if it hadn’t been for surfing. I get in the water and it all just washes off me, like a rinse cycle.” Because he came to surfing later in life, he also has deep respect for the challenges facing neophytes. When I ask him what I need to overcome my inhibitions, he offers this advice: “The enthusiasm of a kid, the experience of an adult, and sunscreen.” (Forget about sharks and drowning: the number-one surfing-related injury is sunburn, number two is wetsuit rash, and number three is getting hit by your board.)

If you have the mettle (and a thick wetsuit), there is never a bad time to learn to surf in Maine—except when conditions are flat or, conversely, when there are monster waves. Most beginner-level instruction is offered from June through September, typically along the southern coast between York and Bath. There are hidden breaks all along the coast, but you have to know someone who knows where they are.

You will save yourself endless frustration by taking a private lesson or attending a surf camp with a qualified, certified surf instructor. Surfing takes practice and patience to learn, and safety issues need to be considered when surfing alongside swimmers and fellow surfers. Because they don’t want anyone to get hurt, some veteran surfers have limited tolerance for general-interest duffers who don’t know the rules of the water. Most surf camps and instructors offer both private and group instruction, free rentals of wetsuits and surfboards, and something else: respect for the tremendous power of the ocean, your physical well-being, and the safety of swimmers and fellow surfers. If you try surfing, borrow or rent equipment and get to know the sport before buying your own wetsuit and board—but that’s another great thing about surfing: once you learn the basics and invest in equipment, the rest is free.

At my lesson, I discover that learning to surf is a lot like learning to ride a bike. The same challenges exist—controlling your speed, getting on and off, and balancing long enough to get a satisfying ride. At first, it’s a little awkward and scary, but once my instructor helped me negotiate the waves and stand up, the movements became almost instinctive. Even if a ride lasts just a few seconds, you will sense the sweet spot: that moment when it all comes together naturally and it’s as if you’re flying. I felt this sensation only twice, for mere seconds, during my first lesson. But it, and the exhilaration of being out there, was more than enough to make me want to do it again.

If surfing is beyond your comfort zone, you might want to try stand-up paddleboarding, also called SUP. SUPers stand on longer, wider boards than those ridden by ordinary surfers and use a paddle to propel themselves through the water. Beginner SUPers start on flat water before attempting to ride waves. Stand-up paddleboarding is easier than it sounds and can be practiced by virtually anyone. Rafael Adams, owner of the recently opened SOPOSUP in South Portland, has taken out seventy-year-old grandmothers and seven-year-old kids.

Paddleboarding gives you the transcendent experience of being immersed in the elements without the more challenging aspects of surfing or the cramped feeling of kayaking. It’s a great workout that requires balance and constant muscular adjustments and exertions (my quadriceps and arms were sore the day after). And Adams is proof that practiced paddleboarders can surf any wave. Adams only began paddleboarding a year ago, but I saw him rip the curl with the best of them at Higgins Beach.

Surfers still outnumber paddleboarders these days, but that’s changing quickly. For one thing, you can paddleboard on any body of water, including the ocean when it’s flat. Inflatable paddleboards are packable in a car trunk and can be pumped up in minutes with a bicycle pump.

In the end, it doesn’t really matter what you decide to try, surfing or SUPing, as long as it gets you out on the open water. Who knows, a little time floating on a board might just be the start of something big—something that saves you and your health in ways you never expected.