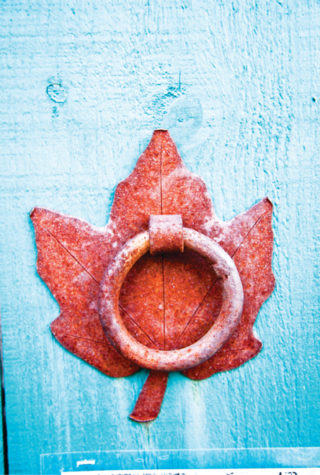 A syrup display for Maine Maple Sunday at the Nutkin Knoll Farm in Newburgh. 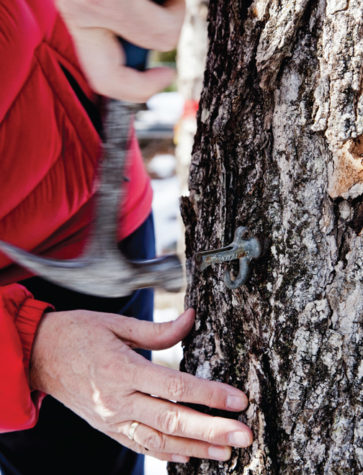 Nancy Price adds a tap to a maple tree at Nutkin Knoll Farm. 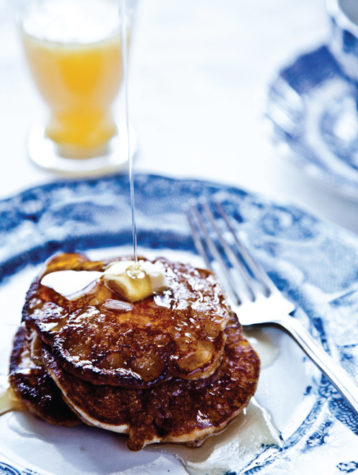 A batch of hot pancakes and syrup at the cabin for maple inspiration. 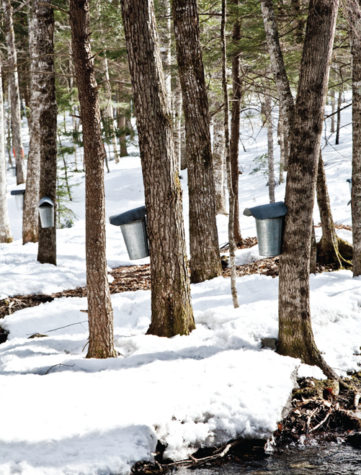 Classic taps and buckets in the sugarbush at Nutkin Knoll Farm 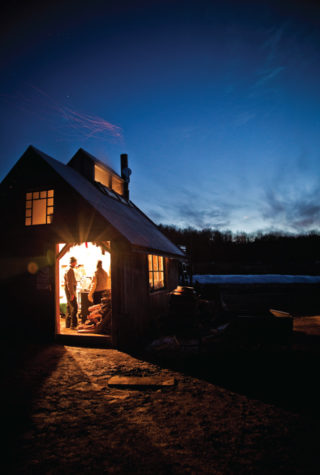 As night begins, the sparks fly above the sugarhouse at Nutkin Knoll Farm 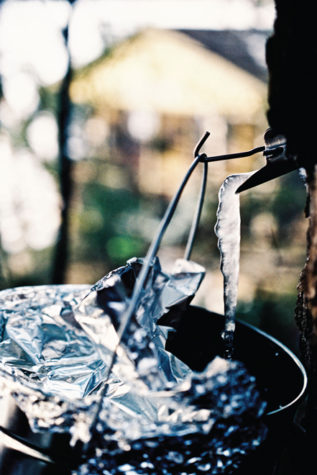 A "sapsicle" forms on a tap in the dooryard.

Steam clouds the scene during some serious syrup making at Sugar Mountain Maple Farm in Freedom. 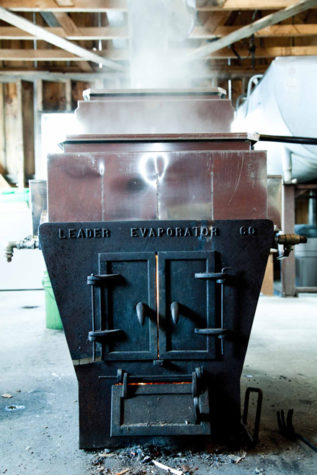 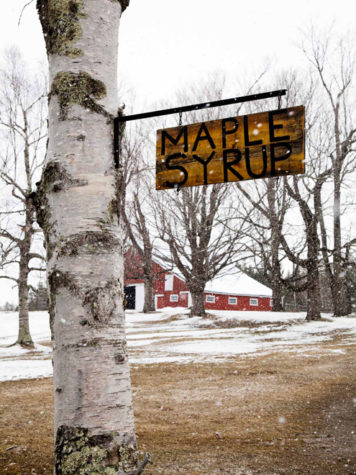 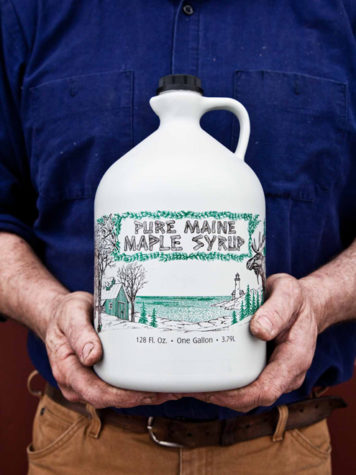 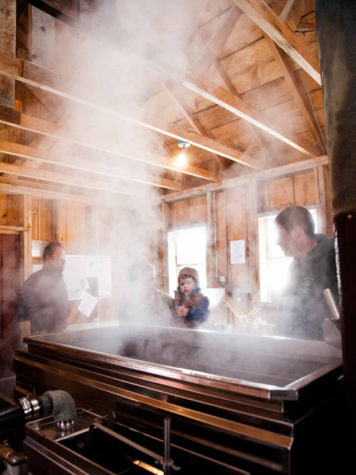 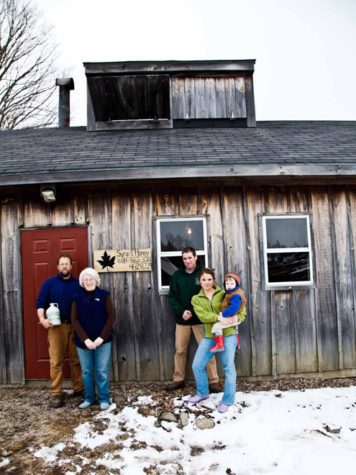 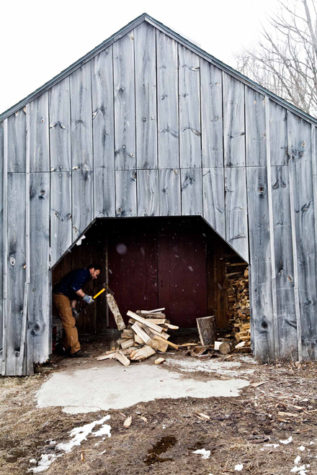 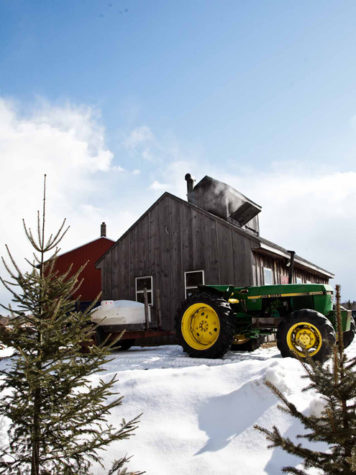 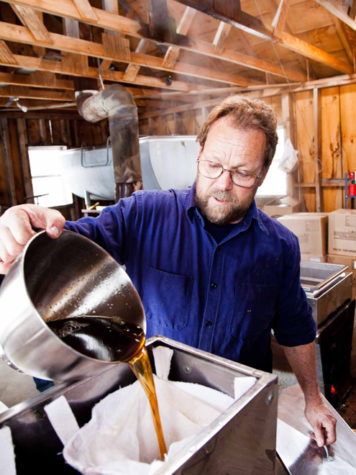 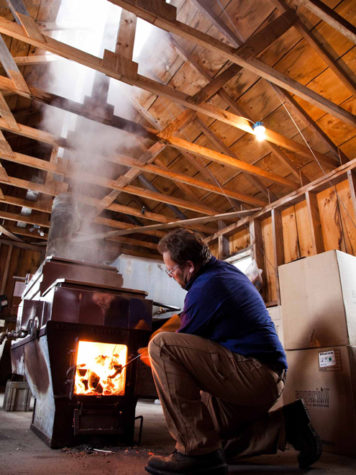 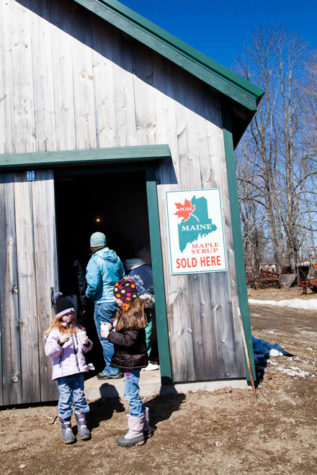 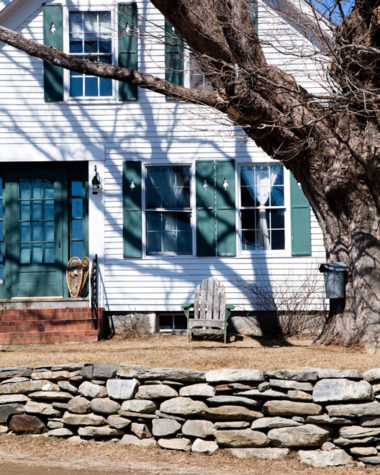 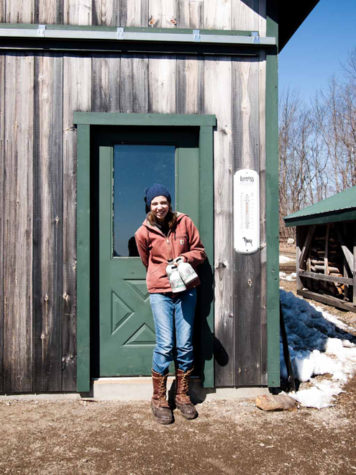 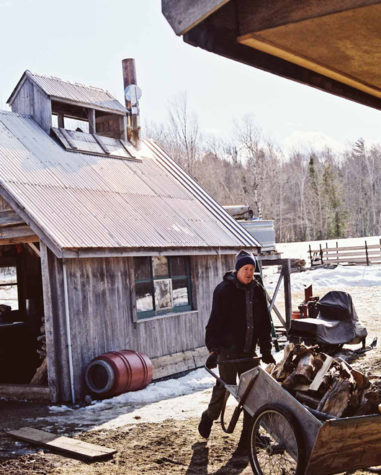 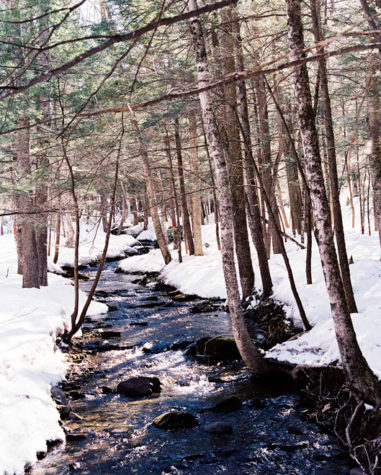 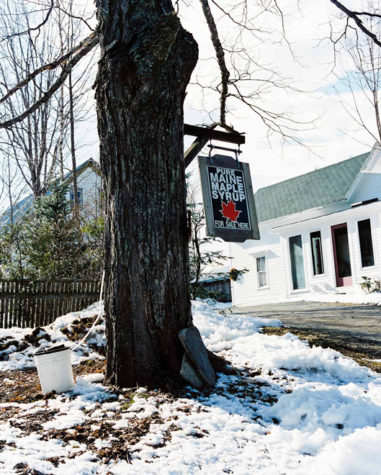 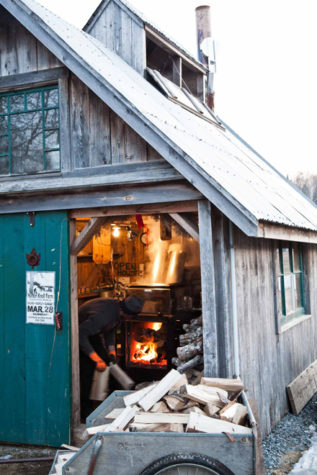 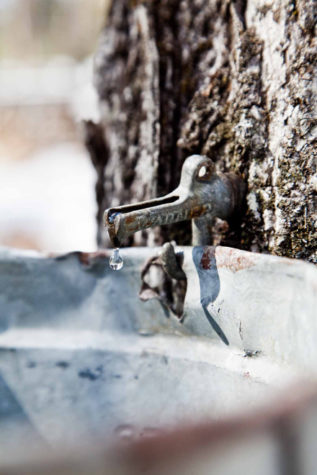 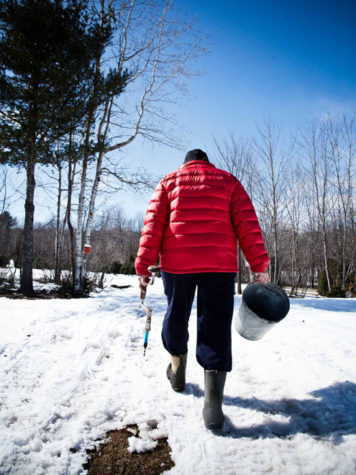 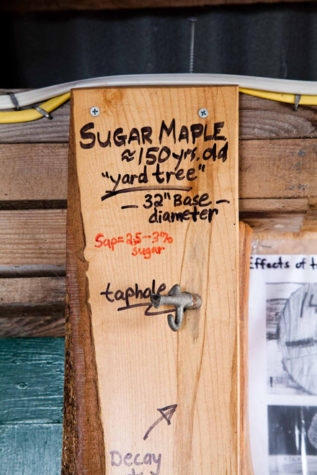 Maple Love: On the Sugarhouse Circuit

Maple sugar can be spun into an amazing, woolly web of cotton candy. I had the chance to try some a year ago, and it was a revelation. But this tale goes beyond a melt-in-your-mouth confection and all the way back to its maple source. On a late-March morning, I fry up a batch of pancakes at the cabin—a common happening. I’ll simply wake up in a pancake- or waffle-making mood and cook up hot stacks to drizzle with maple syrup. This time, visions of sugarhouses dance in my head. I flip another round of pancakes and get a plate ready. Lately, the snow has been melting outside on sunny afternoons. The ground is getting bare in places, and I’m ready to see the tapping of trees and the steam and fire of maple sugaring.

It’s a simple passion. I love the jugs and jars, which often come in the shape of a cabin or a maple leaf, filled with the clear, caramel-sweet amber syrup—a pure gift from the trees. Months ago, I circled the fourth weekend in March on my calendar, the date the Maine Maple Producers Association calls “Maine Maple Sunday,” when maple-syrup farms open their sugaring operations to the public for the day (or the weekend). With luck, the timing coincides with the spring thaw, when sap is flowing in the maple trees. I’m curious about a handful of sugarhouses nearby, all of them east of I-95 in Waldo and Penobscot counties. I jot down a list of the rural addresses and make some calls.

“Compared to the last few years, we’re running way ahead,” says Mike Hamblet of family-run Wentworth Hill Farms in Knox when I catch him on the phone. “It’s a small operation—we’ve got an evaporator.” I drive into rural Waldo County that Friday afternoon. The sun is out and a dusting of sparkling snow is falling. From an unpaved lane on the 200-acre farm, I see smoke rising from a wood-sided building on a hill. My heart speeds up just a little in the way it always does when an adventure begins. I have wanted to do this for a while—to get myself to a working sugarhouse when the sap is running. Over the course of a season, the farm might generate 35 gallons of syrup or 60, depending on the run, Hamblet says. Last year, the family, which is in its eighth generation on the land, tapped some 400 trees on the property.

I’m standing in the sugarhouse. Steam from the evaporator is constantly rising to a vented cupola in the center of the roof, and Hamblet never stops moving. He watches the sap at its rolling boil, paying close attention to the color, thickness, and temperature. When collected from the trees through taps and either buckets or tubing, the clear, thin sap might be as much as 99 percent water, so boiling it down to syrup can take a while. He adds wood to the stove that provides steady heat, and eventually the water evaporates until only sugar and minerals are left—a pure, caramel-colored syrup that’s strained through a wool filter and bottled. The run is most intense and the process is most time consuming when temperatures are still dipping below freezing at night but getting into the 40s in the daytime. Everyone pitches in.

The sugarhouse door opens and several more family members walk inside to check on the progress or help out. Lance Oliver, a member of the family and a young father of three, says that “when the sun’s out, the sap is running; when it’s cloudy, not so much.” He knows this process

well, and says that one decades-old stand of maple trees is near where his grandfather used to boil sap on a cookstove. Carol Wentworth asks if anyone would like to try a taste of the day’s syrup. She starts scooping vanilla ice cream from a carton into paper cups and drizzles the still-warm maple syrup on top—ahh, the Maine maple sundae. I don’t think anything brings out maple flavor like vanilla ice cream. During the annual open house, the farm doles out cups of ice cream with fresh, hot syrup all day. A necessary treat, Wentworth says, “after we invite all these people up here in the mud season.”

Once you’ve got maple on the mind, you begin to notice syrup buckets, lines, and sugar shacks all over Maine this time of year. For this trip, I am staying mostly within the rolling landscape of Waldo County. At farm houses and roadside fence lines along the way, people have hung every manner of container from the rough trunks of tapped maple trees. Or they’ve looped lines—and even what looks like garden hoses—to larger buckets, barrels, and other containers that hold the collected sap. Most of these tapping systems appear to be for personal syrup making. Hardware stores keep taps in bins near the register this time of year. At one store, I notice stainless-steel taps with bucket hooks for $2.49 each.

Then it’s on to another open house, at a sunny hilltop farm in Morrill: Simmons and Daughters Sugarhouse. Cars line the road for several dozen yards, and I can already see people standing near the road, outside what must be the sugarhouse. Here, Chris and Shelley Simmons are making syrup with the help of their four young daughters. Chris, who is also a game warden, explains the operation. The family is doing everything as traditionally as possible, and they still collect sap bucket by bucket. His dream is to one day use a draft horse and a sleigh for the collecting. Once the sap is collected in the sugarhouse, copper tubing brings it to a rebuilt 100-year-old evaporator situated below a few bare bulbs hanging from the ceiling. When it’s running full tilt, as it is on this day, a billowing cloud of steam fills the room to the rafters. Step inside and you’re in a maple haze. Soon after I do, one of the Simmons daughters hands me a cup of ice cream topped with syrup. The crowd’s mood is high. A woman beside me points to a hole in her sweater that she says came from a spark that jumped off the fire at another sugarhouse she visited that morning in Knox County. Smiling as if the burn mark is a fine memento, she says, “We make a day of it every Maple Sunday, meeting friends and getting to at least three places.”

That’s my goal as well. On to the next stop: Sugar Mountain Maple Farm on North Palermo Road in Freedom. A 1940s-era truck is parked out front, and it looks like it’s been there quite a while. “We boiled until two o’clock in the morning,” says Haig Brochu, a wiry man with the look of a cowboy who runs the place with plenty of energy and character. He calls the wood building with the metal roof a “maple syrup camp,” but the production level is serious. A crew of men “feed the monster,” a large, wood-fired evaporator that requires a huge amount of split logs. Brochu says they sometimes boil down 800 to 900 gallons of sap in a day. At the open house on Maple Sugar Sunday, free cups of coffee are offered, along with molasses donuts made by a neighbor. The narrow space fills with guests who file through to watch the syrup being made by men in jackets embroidered with the likeness of Snowball, Brochu’s prized Italian-breed white bull. One of the men draws up some syrup on a paddle and lets it drip back down into the evaporator. “We’re looking for the syrup to hang in a curtain from the paddle,” Brochu explains. In addition to the proper temperature, this is an indicator that the sap has reduced enough. Besides the display of syrup and steam, this sugarhouse has natural and agricultural artifacts on the walls, including giant paper wasp nests, mounted fish, iron tools, wooden snowshoes, and photographs of sugaring in past decades. Brochu says the sugarhouse is a fourth-generation enterprise that hasn’t changed much over the past hundred years. “We still fire with hardwood, and we put up a thicker, heavier syrup than most,” he says. Then he encourages me to try some. Not to worry, I am picking up jugs or jars of syrup at every one of my stops. That’s another thing that happens at the open houses: guests can buy maple products to take home.

One more sugarhouse is on my list for the weekend, at Nutkin Knoll Farm in Newburgh, which is west of Bangor in Penobscot County. Some people know the farm better for its tall barn where owners Len and Nancy Price sell Christmas trees, garlands, and wreaths over the winter holidays. But on these first spring days, they fire up the sugarhouse near the barn and a fenced-in pasture for goats and horses. The couple invites me to walk into the sugarbush with them to see the maple trees in the snow and the icy creeks rushing past. The Prices, both professional educators, show me how they use a hammer to tap in a short spout and hang a bucket beneath. Sunlight is coming into the woods at its low winter angles when I see the clear, watery sap start to run from the tap within seconds. Len points out that some of the trees are forming frozen, dagger-like “sapsicles” on the taps. I catch some of the dripping sap on my fingers for a taste, and it’s cold, fresh, and barely sweet. If this maple sap has waited all winter to move up through the tree, I feel incredibly lucky to be standing there sipping some in the winter’s last snow.

Before long, the sun is setting and Len is back in the sugarhouse boiling down the day’s take. Like the other syrup makers, he’s vigilantly attentive to the steaming sap, and he only steps away from the evaporator to gather and load more firewood. After watching him work for a while (and trying to stay out of the way), I eventually say goodnight, step outside, and walk to my car. I wonder how long into the freezing Maine night he’ll be out there minding that sweet boil. The Prices gave me a bag of maple cotton candy, a treasure I’m holding under my coat. The night sky is clear and dark, and I turn around to see steam and sparks from the fire streaming high above the sugarhouse. Before driving off in a warm car, I think only this: thank you farmers, thank you trees.