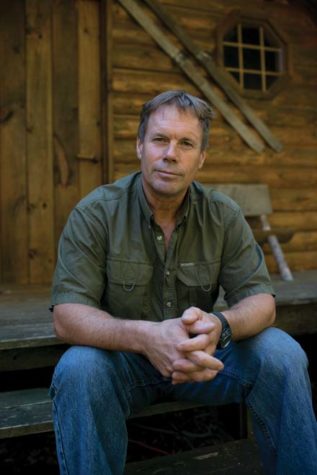 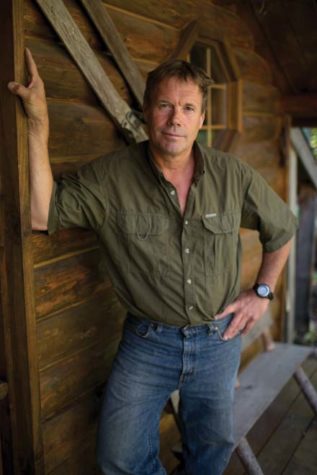 Chip Cochrane on the deck of the backyard sauna he built by hand. 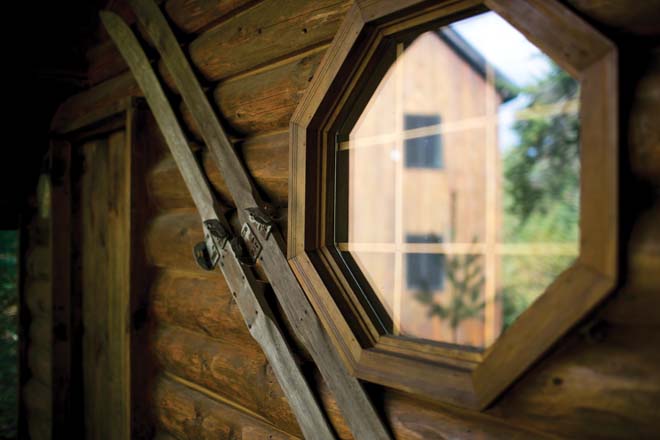 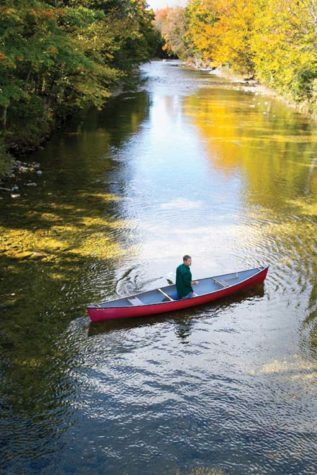 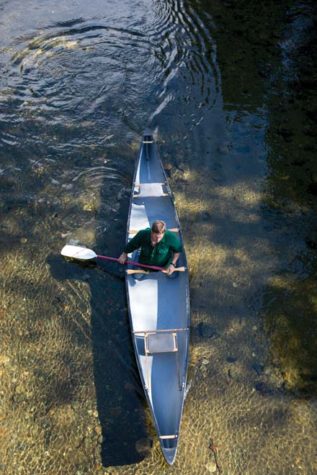 In the summertime, Chip Cochrane and his wife Lani run the family business Allagash Canoe Trips. The company was founded by Chips grandfather, Herbert Coach Cochrane in 1953. 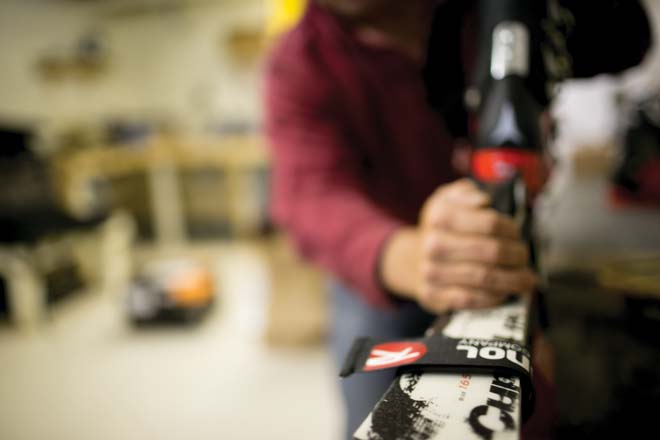 Chip Cochrane tuning a pair of skis in his Carrabassett Valley Academy workshop. Of the CVA experience he says, The sky is the limit here. You can go as far as you want. 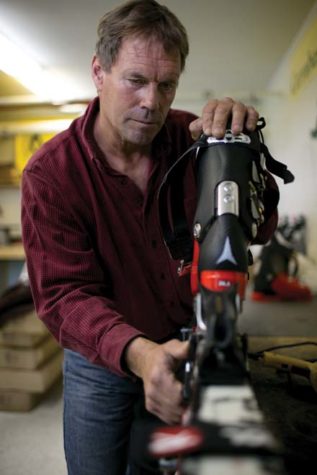 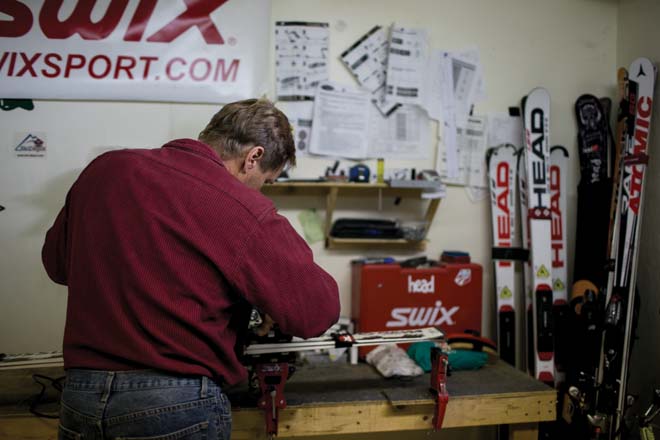 As a young boy in Greenville, Chip Cochrane ate his lunch outside in every kind of weather—sunny, rainy, snowy, bitter cold. Sometimes, classmates joined him. Often, he sat alone. In the classroom, he looked out of windows. In the car, he rolled them down. It’s not surprising, then, that he took to skiing the way he did. The sport offered an opportunity to be in the fresh air for hours on end. He loved going fast, feeling the warm burn deep in his muscles and the cold burn on his nose, ears, and fingertips. He loved the pursuit—of ski stardom, sure—but most of all he loved the demands the sport and season made on his body, mind, and spirit.

Chip Cochrane and his two younger brothers learned to ski on a nearby hill, Squaw Mountain, and later graduated to bigger mountains like Sugarloaf and Sunday River. Chip’s father, a skier himself, woke with his boys in the black of morning to drive them to races two, three, four hours away. The Cochranes approached every season with the same rugged determination. Chip’s father, and his grandfather before him, ran the family business, Allagash Canoe Trips, an outfit that brought campers, tourists, and locals with a hankering to explore on trips of varying lengths down Maine rivers. At the age of 11, Chip started spending his summers on the water and in the woods alongside his father. They would tap maple trees for syrup in the spring. Later on, Chip started taking solo canoe and kayak trips when the rivers bubbled over with rain. But a competitive edge set in with the freezing temperatures—winter was always about skiing. Out of high school Chip qualified for the U.S. Ski Team, and was joined by his brother, Tristan, soon afterward. They both competed in the 1982 World Cup, where Chip suffered the injury that would end his career as a racer.

I meet Chip Cochrane at Carrabassett Valley Academy, where he is a men’s alpine coach. It’s early in the morning, and the students draped over the furniture near the school’s entranceway are preparing for class—sorting through binders, chomping on apples, teasing each other. Up a flight of stairs and down a hall harboring a musty yet comforting smell, I find Chip in his office.

I like him immediately. He has a weathered face and a boyish habit of ending every sentence with a smile and laugh. When he wonders out loud why I’m interviewing him, I hear no false modesty in his tone—I get the sense that he thinks of himself as a pretty good guy among many, and therefore unworthy of special attention. “I’ve been down the Allagash 128 times, for what that’s worth,” he says with a laugh. It’s not hard to put a finger on some of the extraordinary things he’s done: he made the U.S. Ski Team, for one, and coached legendary Carrabassett Valley Academy graduate Bode Miller, for another. But he doesn’t dwell on those accomplishments, and neither do I. I would rather learn about how he built a life around what he loves most—being outdoors—and the affect that has had on his health and happiness.

After his dream of being a downhill ski racer was cut short, Chip went right into coaching. He couldn’t stay away from the mountain, though years of premier competitive skiing have taken a toll on Chip’s knees, and he walks with a slight limp. “I’ve wrecked my knees a few times, so I’ve had a knee replacement. But my artificial knee works great.” These days Chip spends his slope time on the sidelines, teaching kids how to ski fast. He loves the work. “The kids here have the same passion. They enjoy the outdoors. We all have that in common, which is the bond that keeps this whole place together,” he says.

He doesn’t underestimate the impact a happy heart and physically satiated body can have on a person’s intellectual and emotional growth, and we discuss how a passion for skiing and snowboarding fuels his students’ studies in the classroom. Chip knows from experience that the best kind of learning occurs on multiple levels; the subject (or the sport, as the case may be) must touch the heart to grow the mind and the body. As a ski coach, Chip is shaping lifelong learners by teaching them the art of resilience. He is teaching students to challenge themselves on the slopes, but also later on in their lives, whether they find themselves on mountaintops, in boardrooms, or at operating tables. Above all else, he’s helping them realize their need for nature. If they don’t know it now, they’ll learn later on that getting themselves outside can become increasingly challenging, but that it’s a challenge always worth meeting.

While running Allagash Canoe Trips with his wife, Lani, Chip encounters people from near and far craving a connection with nature. These are people who might not have the know-how to execute a trip of such proportions, but who are willing to get out of their comfort zones. Chip tells me that spending a week in nature has a tremendous affect on their psyches. A noticeable shift occurs after 24 hours, and the purification deepens every hour that follows. “I think it’s what people need to feel good again,” Chip says. He’s speaking about specific people—the people who write him effusively thankful letters in the weeks, months, even years following a canoe trip down the Allagash. But the phrase seems to speak to an even larger cultural disconnect, one we’ve had for so long we don’t even recognize it anymore. Chip still feels that craving come on, and he feeds it by kayaking, canoeing, skiing.

The sunlight falling through the window in his office suddenly shifts in color, and we peer out the window toward its source. A ceiling of cloud has cracked apart to reveal blue sky and bright sun. If it were ski season, Chip would be on the slopes at this hour. “I have trouble being cooped up, and it’s probably going to be a problem for me when I’m an old man,” he says, again with a laugh, always with a laugh. “I’ll have to have a house of windows.” But I suspect nothing but the unfiltered woods will do.