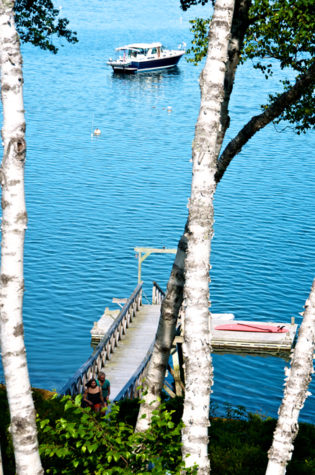 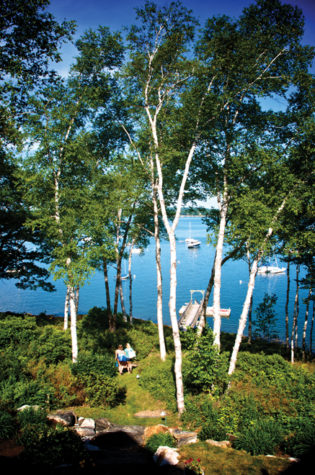 Caitie, and her friend Ann carry sail totes of food and fun down the hill from the Fridlingtons Cousins Island home to their dock. Island Runner is dead ahead on her mooring, framed by two white birches. 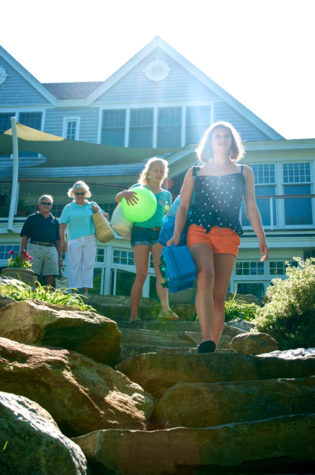 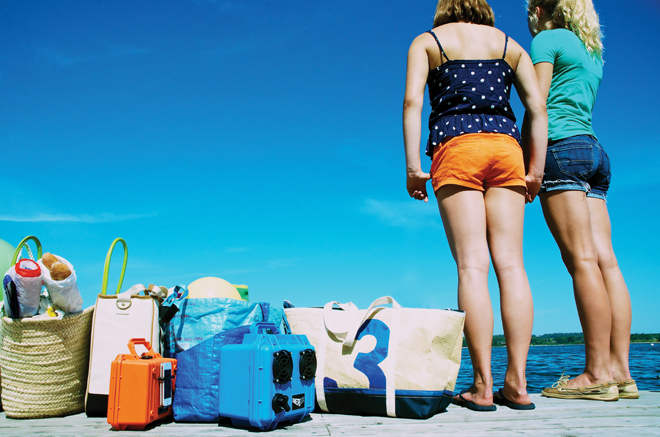 Caitie, and Ann wait on the dock at the Fridlingtons Cousins Island home to board Island Runner. The Casco Totes from the Portland Trading Company are fashioned from recycled nautical flags. The orange and blue wireless Bangs speakers in the foreground from Demerbox are rugged, waterproof, and play music from a smart phone or computer via Bluetooth. 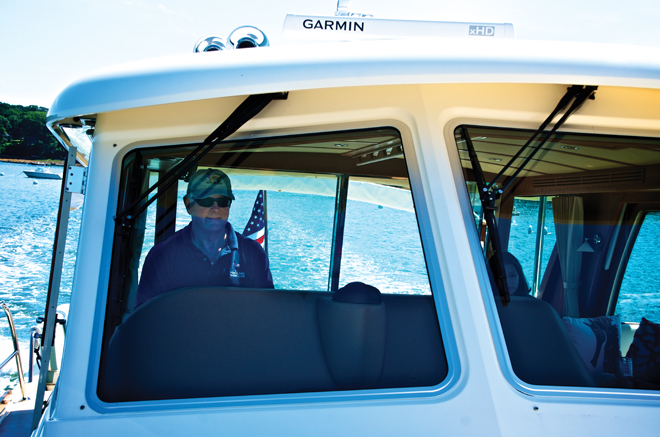 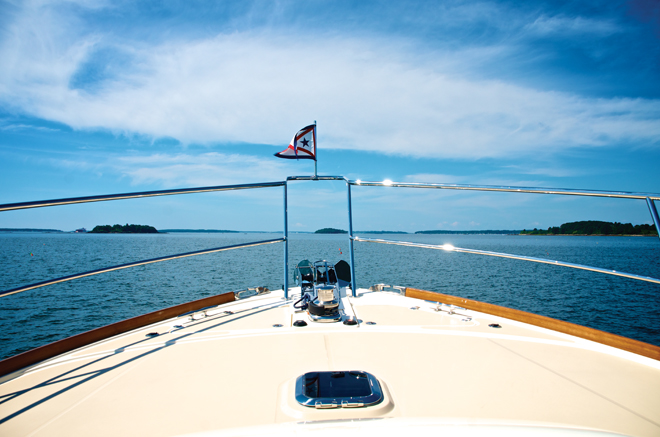 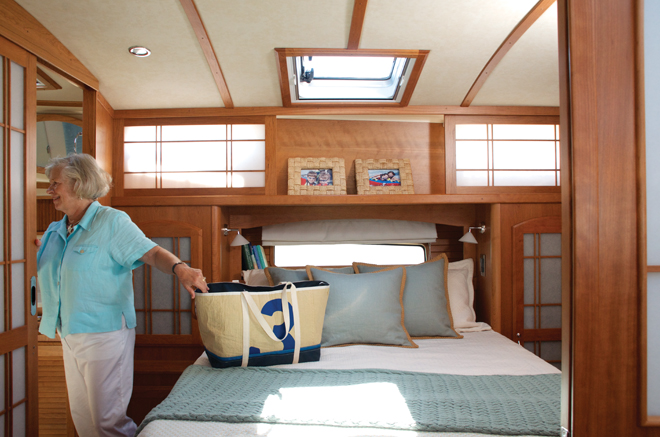 Pam Fridlington in the yachts master cabin below decks. The Fridlingtons love the walk-around feature of the bed as well as all the built-in drawers and cabinets. The Sabre 48s interior wood is all cherry. The hatch provides a view of the stars at night, and the cabin ports above the headboard let in more light. There is never a sense of being below with so much airy space and generous headroom. 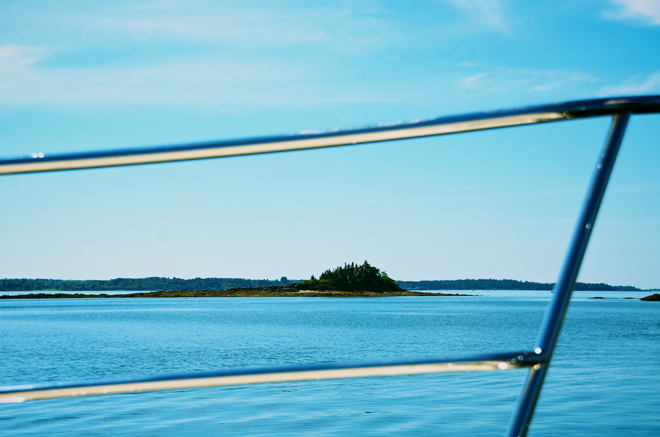 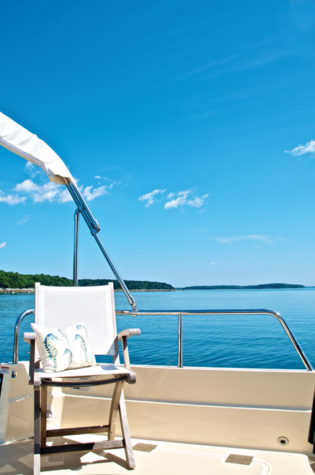 Island Runner at anchor off the Goslings. Lower Goose Island is seen off the stern at left, with Upper Goose and Birch Islands center, and right. 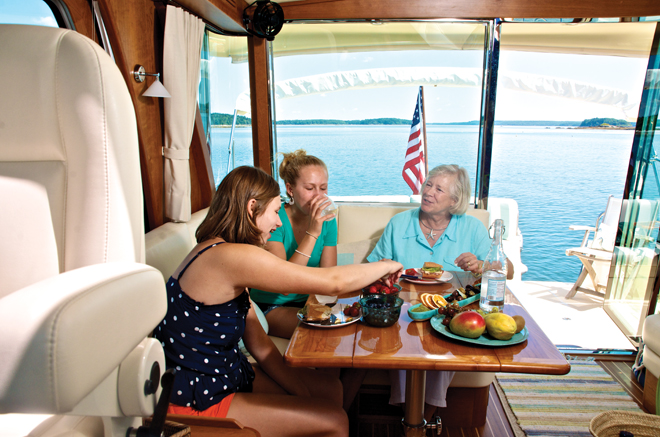 A picnic onboard Island Runner. Caitie, Ann, and Pam Fridlington eat in style at a cherry table on the yachts main saloon helm deck. 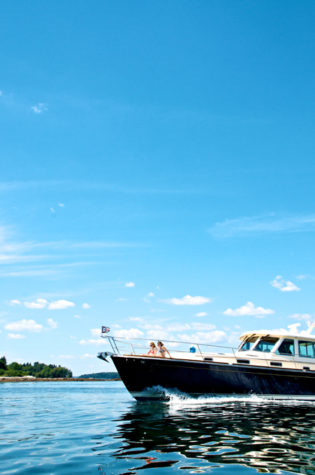 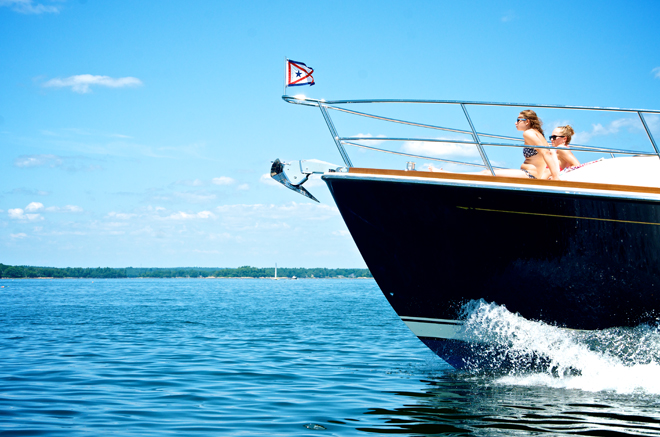 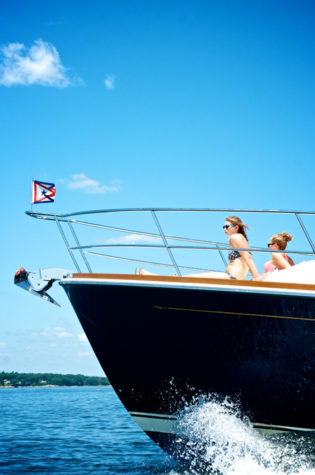 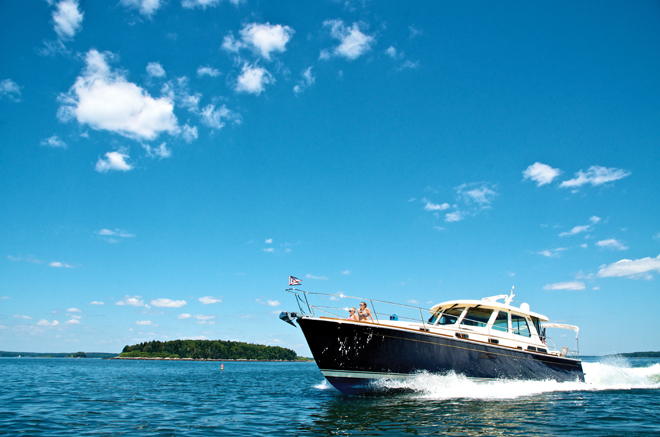 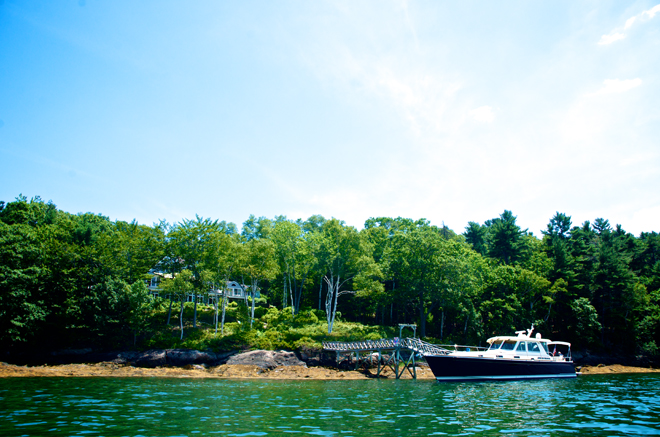 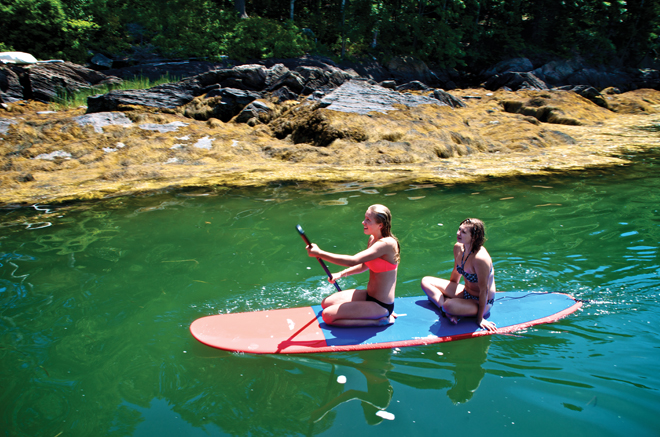 Anne, and Caitie cool off on the paddleboard near the Fridlingtons dock. 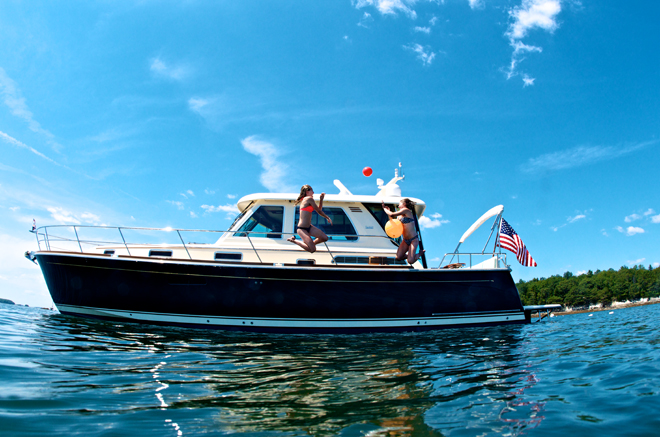 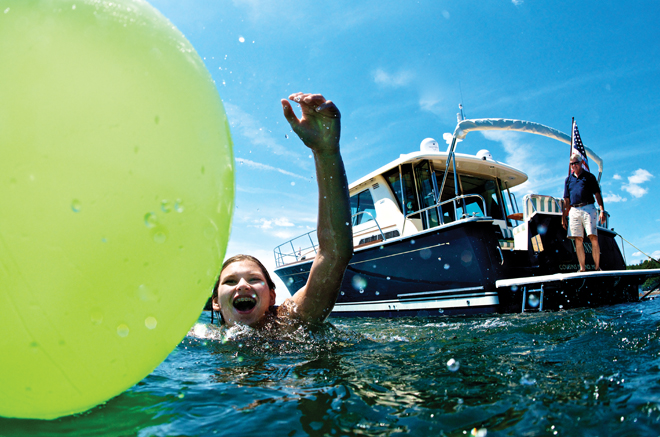 Caitie gets the ball off the Goslings in Western Casco Bay. A nationally-ranked swimmer, shes in her element. Proud grandfather John Fridlington watches from Island Runners swim deck. 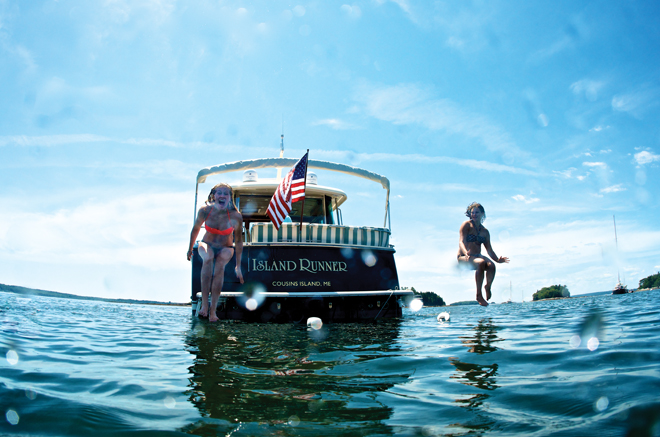 Three generations of a family on the water

The Fridlington family is gathered early on a July morning at grandparents John and Pam’s Cousins Island home for a boat ride and picnic lunch to the Goslings in Western Casco Bay. It’s one of the hottest days of what is one of the hottest summers on record in Maine. Even here at the water’s edge, heat waves shimmer and there is not a breath of breeze. Island Runner, their Sabre 48 motor yacht, sits motionless at her mooring in front of the house; only the tide running out makes ripples around her. Otherwise, the water is, unusually, glass calm.

“Good thing we’re not sailing,” someone remarks, and there are nods of agreement all around.

John and Pam are old hands. They grew up in New Jersey, and Pam spent summers in Long Island, New York. They’ve been on the water together since they met in high school in 1962—51 years ago. John’s banking career positioned them initially in Massachusetts near salt water. At one point, he was a strong candidate for a job at the Bank of Bermuda in Hamilton. But although the Fridlingtons had both honeymooned and vacationed there, John realized the strictures of Bermudian life were not for them. “The bank was careful to inform me of the quite strict limits on land ownership, club membership, even social opportunities,” he says. “It’s a wonderful place to visit, but we saw we couldn’t live there.”

The same was not true of Maine when Peoples Heritage (now TD) Bank beckoned in 1992. “We couldn’t believe we could live in Maine,” Pam says. “We thought we had died and gone to heaven.” First in Falmouth, and now on Cousins Island, the couple has been here for 21 years. And every one of them has been spent on the water with their family. First with their children Kim and Bill; then their children’s spouses, Matt Tycz and Michelle Fridlington; and now, their grandchildren, Caitlin and Ella Tycz, and Christopher and Ben Fridlington join in.

There’s a lot of talk about families doing things together. It’s practically the tenet of contemporary parenting; but, like so many things, easier said than done. Often, the activity becomes spectator sport: parents cheering children on in various kinds of games. It’s difficult to include young children in adult sports. But being on a boat is something everyone loves to do, from infants to grandparents. Ask the Fridlingtons.

“I remember our first boat as a family,” daughter Kim says. “It was a 21-foot sailboat and we stayed overnight on it every summer weekend. The boat had no water, so my parents would plug the coffee pot in on the dock. We also had to put our cooler on the dock since we couldn’t all fit into the boat at night. My mother thought it would be a good idea to have a hot lunch so she put cooked hot dogs into a Thermos. Unfortunately, they all expanded so we couldn’t get them out. We all laugh when we remember my mother shaking that Thermos up and down!”

Today, aboard Island Runner, an elegant lunch is spread out on a beautiful cherry table on the main saloon helm deck. In the galley below Pam works on Corian counters with a double sink amid good-sized stainless-steel appliances. The boats of the past offered an aluminum-lined “ice box.” Island Runner has central air below decks in addition to two full baths and two spacious cabins—with satellite TVs fully enjoyed by grandson Ben, ten, when he isn’t “bouncing up and down on the waves, enjoying the sun, and just having fun” on the boat.

Granddaughter Caitie has brought her friend Ann Tolan along today. The two 13-year-olds are teammates in the Long Reach Swim Club at the Bath YMCA, and will be freshmen at Brunswick and Bath high schools, respectively, in the fall. This morning, they gamely haul sail bags of food and gear down the steep pathway from the Fridlington’s home to the dock. Because the tide is low, everyone will have to dinghy out to Island Runner; her draft is too deep to be brought in at low water. After several trips, we’re all aboard, and ready to go. John is a sporty captain, dressed in a Portland Yacht Club jersey, shorts, and boat shoes. He is fit and trim, confident in every movement as he starts up the engines, casts off the mooring and heads us northeast up the coast toward Harpswell. He sits before an impressive display, screens showing both the chart locations and underwater topography.

Underway, we all appreciate the breeze, although the sun is high and hot. Pam is pushing water on everyone. Tanned and elegant in linen with lovely starfish jewelry, her silver hair sets off dark brown eyes and a quick smile. When asked if she can handle the boat herself, she nods affirmatively. “Almost everything,” she amends, looking over at the console display. “The electronics are definitely John’s area. But yes, I can steer at sea; I can dock a boat.” However, when a lively discussion ensues later as to exactly which of the Goose islands (Upper or Lower) we’re moored near, it is Pam’s smart phone Navionics electronic chart app that provides our exact location. Not to be outdone, John pulls out the well-worn NOAA Atlantic chart book, a document which measures 12”x16” instantly familiar to sailors of old. “I always used to sail with this open right beside me” he laughs as Pam triumphantly waves her palm-sized phone.

Those earlier experiences took them to Long Island Sound (when they were sailing out of Mystic, Connecticut), down the Intracoastal Waterway to Florida, and up the coast to Nova Scotia. Pam recalls seeing spouting whales as they crossed the Bay of Fundy. “We stopped our engines and were rewarded with beluga whales swimming right alongside the boat, checking us out. Soon we encountered pod after pod and later, sharks. It was truly a remarkable passage, one we refer to as our Bay of Fundy safari.”

It doesn’t take much urging to get John to praise another pod, the Sabre’s dual-pod drive, a relatively new power system that eliminates the need for shafts, struts and rudders. The important difference is “thrust,” the motion that moves a boat forward or backward. A motorboat generates thrust (or reverse thrust) when the propellers are turned to accelerate water backwards (or forwards). But instead of using traditional running gear (a shaft and propeller) to transfer the engine’s power into thrust, a “pod,” consisting of the transmission, outdrive and propeller(s), is mounted directly through the bottom of the boat. The pod articulates to direct propeller thrust, so no rudders are needed. The bottom line of all this technology is the captain’s ability to maneuver the boat in any direction by means of a “joystick” on the console. “Sideways, backwards, you name it,” John says. “The pod drive makes you look a lot better than you are!” Anyone who has attempted to dock a boat at a busy marina with benches full of old salts looking on can appreciate that. The pod drive also reduces fuel consumption.

By now we’ve glided into the waters of the Goslings, two privately owned islands in Western Casco Bay whose owner allows exploration and camping in designated areas. This anchorage to NE of the Goslings and SE of Lower Goose Island is filled with moorings and is a favorite of Casco Bay recreational boaters during the summer. L.L.Bean uses the outer Gosling as a campsite for its overnight kayaking trips. South of us, several intrepid boaters are traversing on foot the narrow causeway between the Goslings and Lower Goose, a path just barely submerged at low tide, which makes them appear to us to be walking on water. Add the shimmering heat waves and our anchorage appears to have taken us to a magical place.

Caitie and Ann waste no time changing into their suits and diving off the deck of Island Runner into the clear green sea. Their swimmers bodies are beautiful gliding beneath the surface of the water. They pop up, bright as the big playful balls they’re tossing back and forth. Water sprays rainbows around their heads. They dive and climb aboard, dive and climb aboard, sea goddesses.

Like many a grandmother, Pam is both pleased and surprised at these beautiful young women. “Just yesterday, she was a little girl,” Pam says ruefully. “The wonderful part of bringing these children up—first ours and then our children’s children—on the boat is how close we all become. We see them all, all the time,” she continues. “We’re part of each other’s lives.”

Son-in-law Matthew says, “The boat makes it possible to spend more time together and make new memories.” I think what he means is that there is a special sense of accomplishment involved in being part of the crew of a boat. You’re all out there together. You understand the hazards of the situation. You pay attention to safety rules. You pay attention to the chain of command. When you’re on a boat, someone has to be in charge, and everyone else has to know that. When the skipper says, “Come about,” no one asks why. You just do it! It doesn’t matter whether the skipper is your grandfather, your mother, or your sister. Young people so rarely have the opportunity to prove themselves in real-life, real-time situations. It’s a gift. Grandson Christopher, 13, says boating with his family is “a great time to bond while enjoying the Maine coast.” When asked a single word to describe what boating with their families means to them, ten-year-old granddaughter Ella says “peaceful.” Her older sister Caitie says “free.” The grandparents say how lucky they all are.