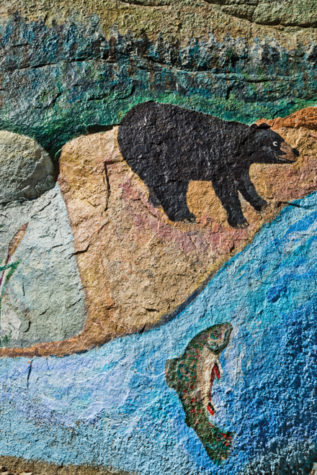 Detail of a mural on a roadside boulder near the Baxter State Park entrance at Togue Pond. 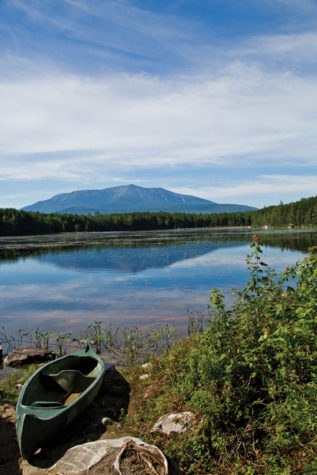 The view of Katahdin from Pockwockamus Pond, just outside of Baxter State Park. 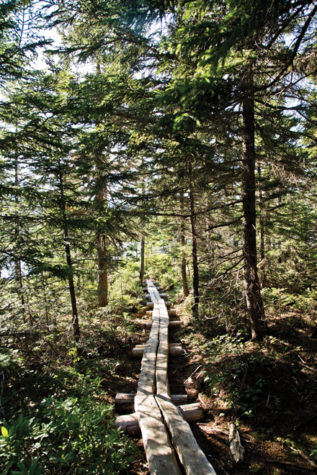 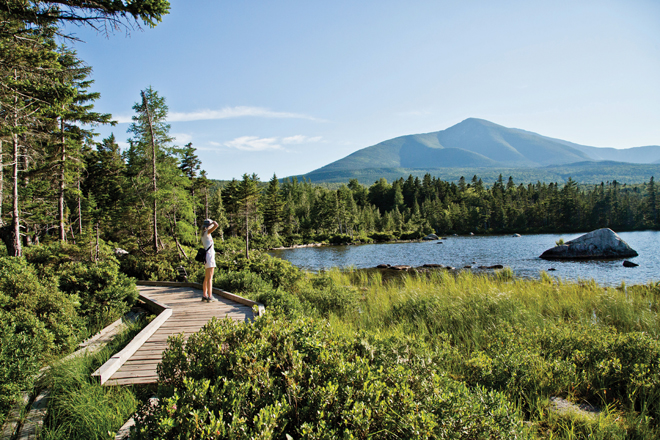 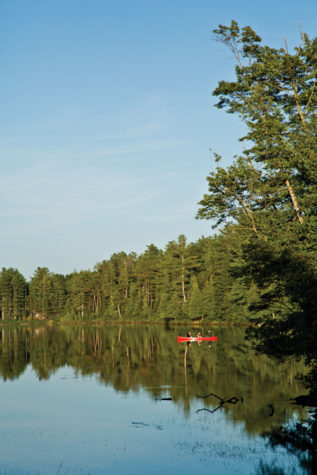 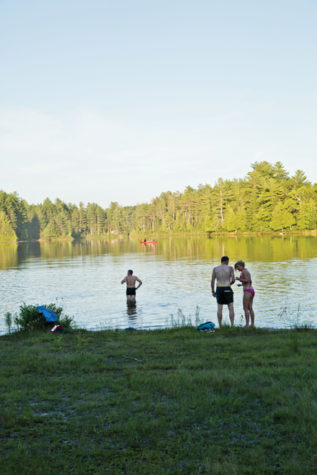 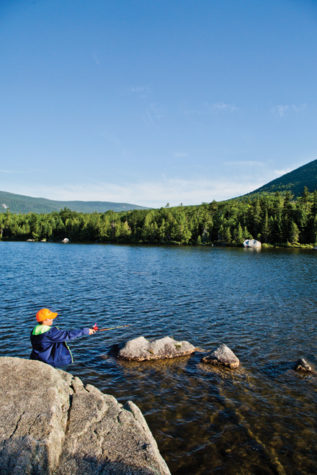 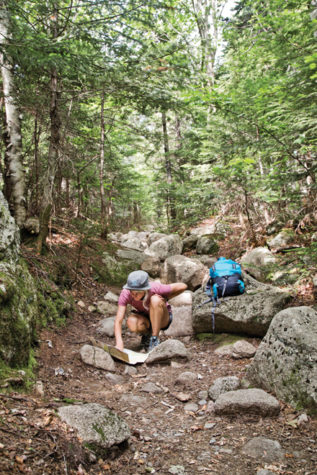 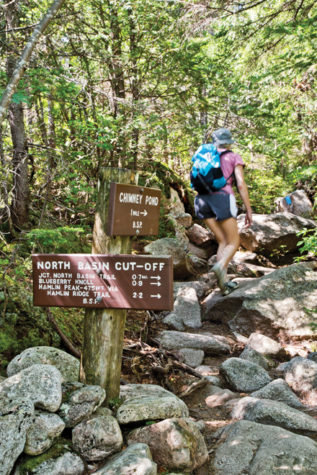 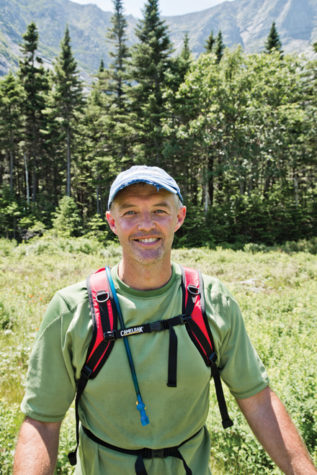 Bob Campbell from Glenburn says he didn't do much hiking until his 30s, and now often climbs the peaks of Katahdin on Sundays as "my exercise and my 'church.'" 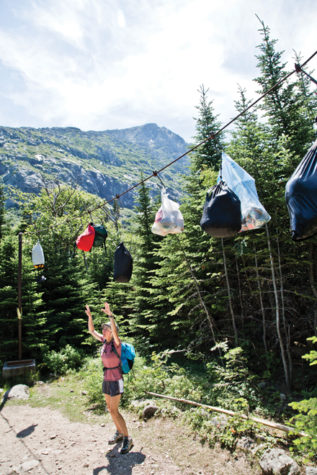 Apparently, the bear line at Chimney Pond is strung high enough to thwart any outstretched paws. 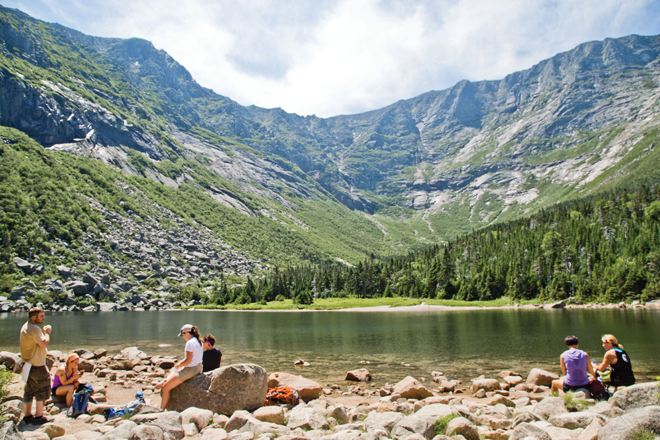 After a climb in elevation of about 2,000 feet, hikers rest at Chimney Pond. In his classic book, The Maine Woods, Henry David Thoreau wrote of his 1846 "Ktaadn" climbing experiences. 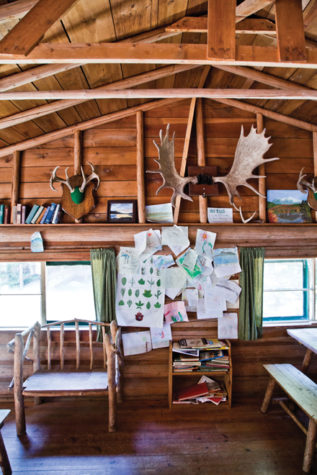 In the library at Daicey Pond Campground in Baxter State Park, where cabins and canoes are available to rent. 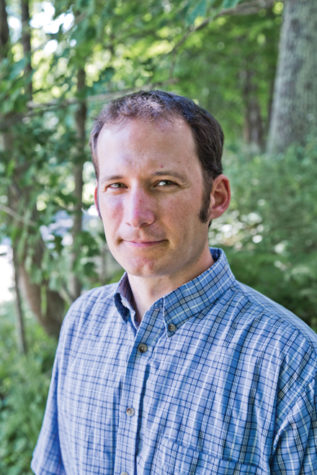 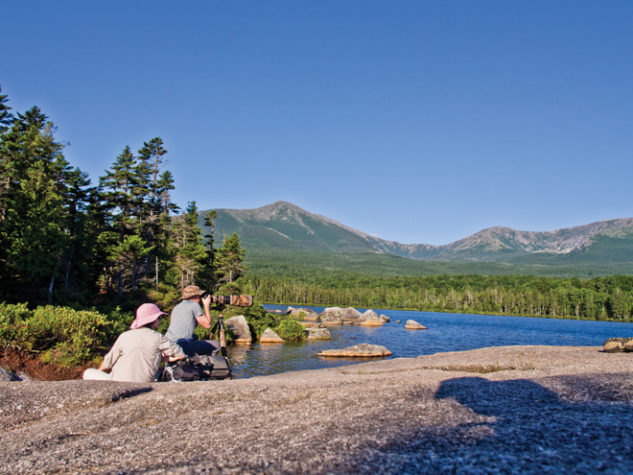 On a mornings watch for moose, Katahdins profile is the backdrop for photographers on Big Rock at Sandy Stream Pond in Baxter State Park. 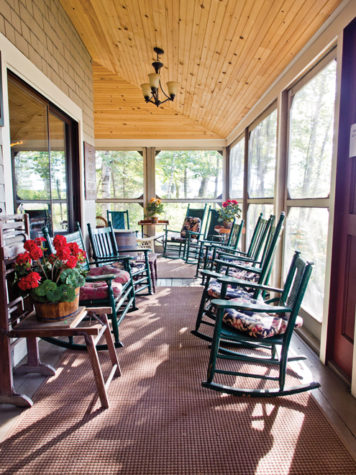 Getting Closer to Maine’s Tallest Mountain

Near the rushing water and wooded paths to lean-tos, cabins, and campsites at Roaring Brook Campground, we see sweat-soaked hikers filing off the mountain every few minutes. A group of five men and women are congratulating each other when they reach the ranger station, where all hikers must sign in and out. Visiting from Quebec and Boston, the friends explain that they met here to camp and climb, and had completed a hike to Katahdin’s summit and back in just over 11 hours. One shouts, “Showers and dinner are next!”

This is the big one. Massive, remote, and glacier-carved, the mountain named Katahdin (sometimes spelled Ktaadn) includes the state’s tallest peak. You can’t miss it. At the very heart of Maine, just south of the wild forests of Aroostook County, and at least 100 miles north of the saltwater bays of the midcoast, the peaks of Hamlin (4,756 feet), Pamola (4,919 feet), and the formidable Baxter (5,268 feet) rise sharply into the sky, linked by a narrow ridge called the Knife Edge.

In the ways that only a mountain can, Katahdin exudes its energy and lures people closer. “I climbed Katahdin” stickers on truck bumpers at Hannaford supermarket are evidence that another person has completed one of the state’s rites of passage. Everyone has stories. Colby College graduate and Registered Maine Guide Aaron Megquier has been hiking on Katahdin since he was a kid, reaching the summit 25 or 30 times. He deems it the “wildest, most challenging mountain east of the Rockies.” Named director of the Friends of Baxter State Park earlier this year, Megquier’s ties to Baxter are practically a birthright. His grandmother was once the cook at Kidney Pond Camps inside the park, and he says the whole mountain is saturated in memory. “When I was eight or so, I loved to lean into the wind on the Tableland when it was blowing 50 or 60 miles per hour, and let it hold me up. I still do that every time I get the chance.”

One nonstop-sunshine Saturday we drive north and pitch a tent among the sunburned whitewater-rafting crowds at the New England Outdoor Center’s campground a few miles from the southern entrance to Baxter (campsites inside the park were full). Busloads of these rafters float and paddle along the West Branch of the Penobscot River all summer, practically in Katahdin’s shadow. As soon as our tent’s up we get back in the car to start exploring, trying to get closer to the giant mountain. A couple miles before the park’s southern entrance gate at Togue Pond, we get that first windshield-filling view as Katahdin suddenly dominates the landscape ahead. It’s as if the road’s center lines are pointing directly toward the peak, and we follow.

That’s how we end up in Roaring Brook Campground bright and early on Sunday morning and follow the trail to Sandy Stream Pond to find the so-called Big Rock, which I’ve been told is a great place to find postcard views of Katahdin—and to see moose and deer. The viewpoint actually is a big rock that juts out into the pond, and when we arrive, four other people are already atop it. A man and woman are silently and intently scanning the shoreline. They must be looking for moose, too, and they’ve arranged themselves around a camera with a lens so large that it’s fitted to a tripod. A few yards away, a woman is perched at the end of the rock while her young son casts his fishing line into the slate-blue water, over and over. Since everyone is being very quiet, I whisper when I say hello to the woman. From nearby Patten, her name is Beth Somes, and she and I soon start talking in hushed voices about how she and her family visit the park almost every weekend when the weather’s good. She loves the park’s vivid colors and always brings her camera, often getting photos of landscape scenery, deer, or the fish caught by her son. “Baxter is kind of a world of its own when it comes to color. It has the most vibrant green moss and trees I’ve ever seen.” Somes says she’d rather gaze at the mountain, though, than climb the “wicked steep” trails. And she’s spoiled when it comes to views. “I can see Katahdin right out from my living room window.” Her husband is more of a climber, she explains, and notes that he and a friend happen to be finishing a three-day camping and hiking trip in the park. She and I talk a while longer, but we don’t see any antlered wildlife in the now-bright morning. It’s high time to get serious about the day’s climb.

In certain settings, the whole state of Maine can feel like a small town. Several hours later, while we’re hiking through mossy woods and scrambling up and over boulders of gray and pinkish granite on the Chimney Pond Trail, we meet Beth’s husband. Even in the dappled light, I recognize his face from one of the back-of-the-camera images I’d seen. He’s a friendly sort, too, and we all start talking. Billy Somes and his friend Cameron McNally, who is hiking with him, admit they have had a rough time with biting flies since they started their 30-mile hike at the northern Matagamon Gate two days earlier. Times like these, Somes says, laughing, he wonders what motivates him to follow Katahdin’s trails year after year. “I don’t know why I do it. It’s just something that’s in you.”

Others feel the mountain’s attraction. Park records show that thousands of people climb the Chimney Pond Trail every year, and soon, we begin to meet a few more of the hardiest of climbers who are already making a mid-day descent. Almost to Chimney Pond we meet Bob Campbell from Glenburn, who is taking a water break and gives a warm hello. When I ask, he explains that he started at Roaring Brook at 6:15 a.m. He says he hiked up the Helon Taylor Trail to the Knife Edge to the summit, and then returned on the Saddle Trail to Chimney Pond. Taking mountain climbs in Baxter “is my exercise, and my ‘church’ most Sundays,” the fit 40-something admits. For fun, he says, he publishes a blog of photographs he takes along the way, and with his daughter, he’ll soon hike the Hundred-Mile Wilderness from Monson to Abol Bridge. Then there’s the lanky 70-year-old we meet, who’s from Texas. He explains that he’s in the Highpointers Club, whose members aim to reach the highest elevation in each state. He “got a late start in life” with climbing, he says, yet has already logged eight such peaks.

We’re getting somewhere, too. After more than three miles of uphill hiking we reach Chimney Pond, and pass the lean-to campsites and the designated “bear line” where campers hang their food in bags strung from a cord between two poles. We’re truly in a wild place now. I imagine a frustrated bear swatting at the bags with outstretched paws. Continuing on the wooded path, we finally get to the pond itself, a basin surrounded by sharply rising rock in a setting that’s simply awesome. The mountain appears to soar straight up from the shimmering water. Sunlight glints on the rock face, and I wish I had brought binoculars. I can barely make out the hikers on the trails high above the tree line. In black silhouette, they look like marching ants. We opt to sit for a while and eat the chicken salad sandwiches that have been heavy in my backpack. A dozen or so other people are resting on rocks near the water’s edge and looking up, just like us. Lunch with Katahdin as the jagged-edged backdrop is unforgettable.

Swimming is not allowed at Chimney Pond, but a ranger we meet advises that it’s just fine to jump into Basin Pond a mile back down the trail. This is good news. Beyond finding relief on a warm day, I’ve scratched my shin on a rock and think a dip will be soothing. Even better, unlike at Chimney Pond, no one else is at the pond’s shoreline when we arrive. We have the wildness to ourselves, and as I step in and eventually dunk completely under, the alpine water feels as icy cold as if the glacier has just melted away. I float and look again at the mountain’s rise, recalling that the Penobscot word Katahdin means “greatest mountain,” and the lesser peaks have names, too—South Peak, Chimney Peak, and more. All are part of the granite profile that fills the horizon. The whole place is a gift. Governor Percival Baxter established “the people’s mountain” by personally buying parcels of timberland from Great Northern Paper Co. from the 1920s to the 1960s that he would then deed to the state. His generosity and vision helped form Baxter State Park, which now encompasses more than 200,000 acres and includes Katahdin.

The ranger on duty at Roaring Brook smiles when we return from our day’s climb and notices our still-damp heads. He tells us that Basin is the best pond in the whole park for swimming. And he recounts how a man who stayed in the campground there two years in a row brought a canoe that he carried two miles up the Chimney Pond Trail and left at Basin Pond for the week, so that he could fish for trout every day, despite the fact that he never seemed to catch many fish. It was enough to simply spend long days in the park’s elevated, majestic setting.

That evening, from the docks behind the Big Moose Inn on Millinocket Lake, a pontoon boat cruises out with passengers also seeking a big view. Nearby on Ambajejus Lake, a seaplane rises above the trees, probably carrying tourists on a sightseeing flight, or on their way to one of the fly-fishing camps in the North Maine Woods. Meanwhile, we’ve worked up a hunger on the trail. Inside the Loose Moose Bar and Grill, most of the customers waiting for burgers or plates of pasta look sun-kissed. The walls are decorated with vintage maps and trail signs, and the night’s entertainment is a man playing guitar. Every table and barstool is full by the time he breaks into “Sweet Caroline” and dedicates the song to “everyone in New England.” The T-shirt-wearing crowd sways and sings along. It’s been a wildly beautiful weekend. As I dig into a plate of hot pasta, I see a woman drinking a Gritty’s at the bar pause more than once to do a few hamstring stretches. She must have felt Katahdin’s pull today, too.