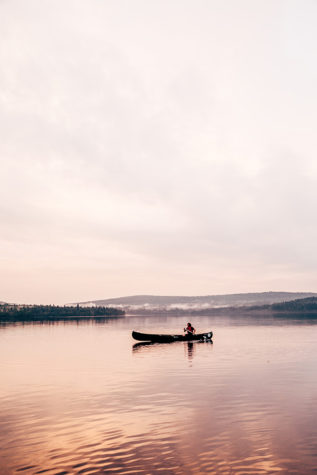 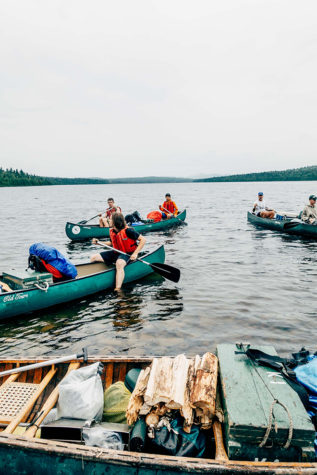 Arriving at camp with a load of dry wood for cooking 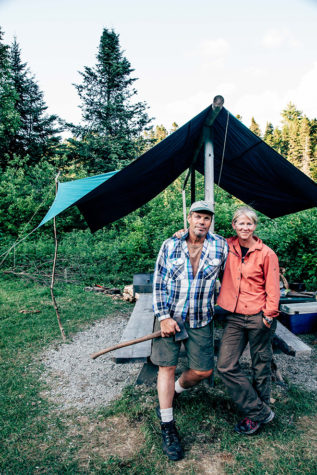 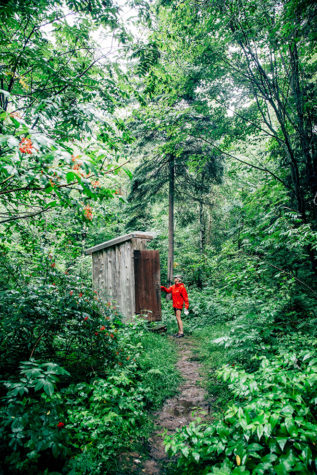 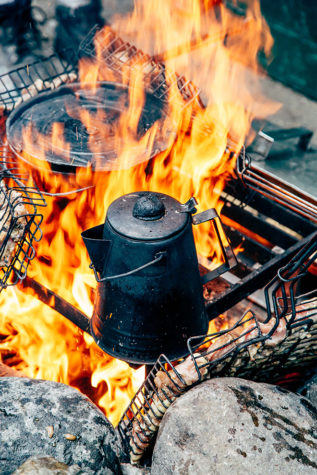 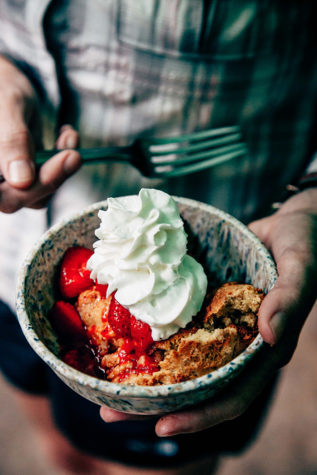 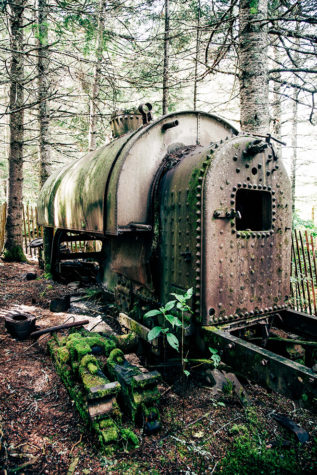 Loaded with camping gear, boys from a Pennsylvania scout troop take to the Allagash

stop to see remnants of an old logging camp 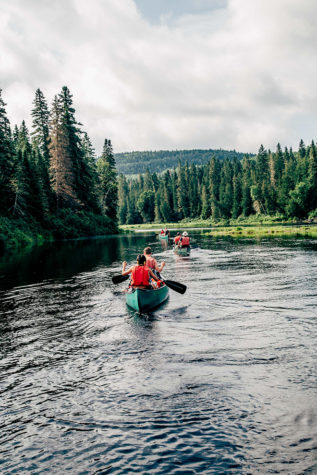 camp group sets out for the day 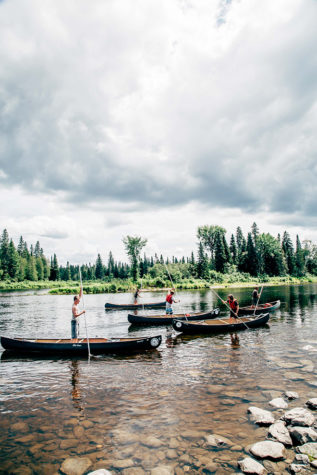 learning how to pole canoes 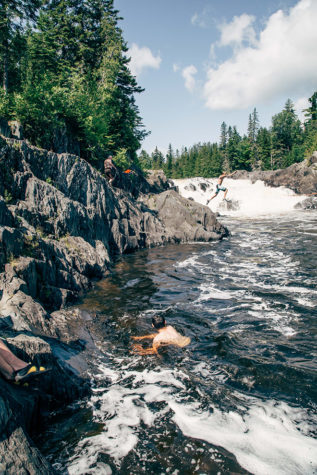 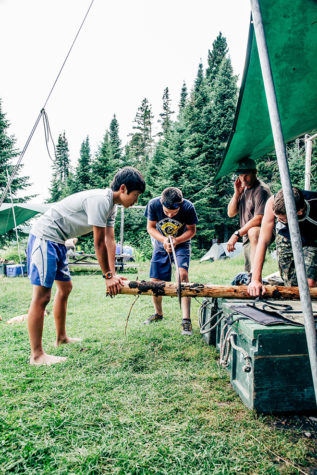 campers chip in to cut firewood 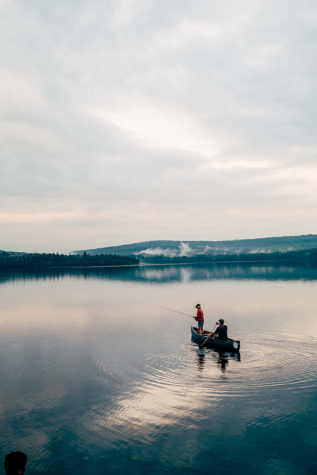 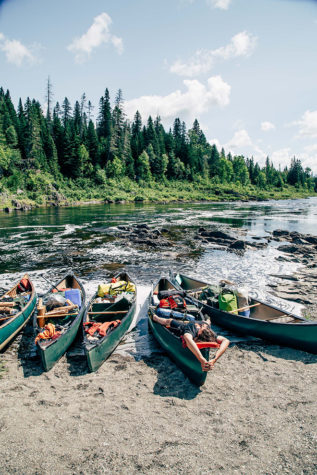 In the North Maine Woods we join the (scout) pack and start paddling.

Silver. The river, and sky, and the trees on the shores of Umsaskis Lake are a chilled, wet wash of silver. Even the raindrops that are falling fast and heavy are shimmering like liquid metal. Fat drops pelt our hats, jackets, the canoe, the water. It’s mid-July and we’ve just met our river guide, Chip Cochrane, who is two days into a week-long canoe run on the famed Allagash Wilderness Waterway (AWW). We aren’t alone; joining us on this canoe trip are teenage Boy Scouts and adult troop leaders, but the boys and the night’s campsite aren’t yet in my field of vision. As photographer Peter Frank Edwards mans the stern, I’m in the bow, pulling the paddle through each stroke and blinking to see.

To get to Aroostook County and the launch area at Umsaskis Lake, we drove north from Bangor for about five hours and 200 miles. The final 50 miles or so had been a dusty drive on Realty Road (aka Reality Road), where we passed several lumber trucks that created a white-out cloud of dust when they rumbled past. North of Baxter State Park, clouds loomed, but the rain didn’t begin until we had loaded our tent, clothes, and other gear (in watertight bags) into the canoe and started out. Prior to the trip, we arranged for Norman L’Italien of Pelletier’s Campground to shuttle our car from Umsaskis to a landing in Allagash Village. Meanwhile, we would paddle some 53 river- miles on lakes, ponds, and the legendary, wild Allagash River herself. This is some of the most remote territory of the North Maine Woods. The entire length of the AWW is approximately 92 miles, and along the way are only nine access points by car. No one lives permanently on the route, and several dozen miles before we shove off in the canoe, I see the signal bars on my phone disappear.

Almost as quickly as it began, that first afternoon’s fast and furious rain ends, and Chip soon points out the night’s stopping point on Long Lake. From a distance, I can see only red canoes on the beach, but then the full scene comes into focus around the campsite, which is on a wooded hillside that rises above the water and a long stretch of sand. A few hundred yards from the camp, boys are swimming, and their heads pop up to watch us. At least one boy has a fishing pole, and others are calling out to each other and circling around the small red, green, and blue tents up on the hill. It’s like we’ve come upon a boys-only secret fort until Chip’s wife, Lani Cochrane, walks down to the beach. She’s also a guide with Allagash Canoe Trips, and she and I are the only women on the trip. A moment later, a couple of boys offer to carry gear up from the canoe.

The ten boys and six leaders from Boy Scout Troop 420 of Myerstown, Pennsylvania, have claimed tent sites for that night in the woods and open areas—some stringing up tent-like sleeping hammocks between trees. The named site, Jalbert, is one of some 80 campsites along the AWW and is equipped with a firepit, pit toilet in a new outhouse (with a skylight), and wooden tables. We expect more rain soon, so while the Cochranes and scouts get fires going, Peter Frank and I deliberate for a while, and then choose a spot to set up our own tent. It’s only for one night, but the location seems critical in case of a heavy storm. Two of the scout leaders tell us they prefer an open area so that after the rain stops, the drips from trees won’t continue to hit the tent. My logic tells me otherwise, that we need to get in a spot with plenty of trees to stop the wind. It’s a toss-up, but we end up choosing the woods.

Before sunset, while a lanky and long-eared, storybook-looking hare hops curiously near, Chip and Lani cook up a delicious barbecue chicken dinner with sautéed vegetables, rice, and strawberry shortcake. The Boy Scouts insist we go through the line first, and then wash all of the dishes afterward in water they lugged up the bank in metal buckets that the Cochranes then heated on the fire. The boys appear to have fun doing these chores, making games of the washing and drying tasks. The troop goes on outings throughout the year, they explain, and they take a big trip each summer. For them, camping is second nature. I’m already thinking that it’s an excellent idea to travel with Boy Scouts.

When the downpour truly starts, toads appear around the puddles that suddenly form near the long wooden tables. The guides and boys had erected a tarp overhead, but when the rain begins to reach us even under the tarp’s cover, people scurry to their tents. In the windy, wet night we sleep well, tired from the travel and paddling. By early morning the rain has ended, and everyone is up evaluating each other’s tent site choices. We stayed dry, but the tent is now sticky from the spruce needles. A few boys ended up in the path of instant gullies of rain, and would have to pack up soggy tents and sleeping bags to dry out later. After breakfast, the scouts comb the site to make sure nothing is left behind and all is tidy, and we paddle again to the next site, 21 miles away.

Well suntanned and fit from summer trips, and at ease with axes, paddles, and lugging heavy crates, the Cochranes are an impressive pair. They have been married for more than 25 years, and navigating the river in canoes is a family tradition. Their guide service, Allagash Canoe Trips, was begun in 1953 by Chip’s grandfather, Herb Cochrane. Chip’s father, Warren Cochrane, continued the guided paddling excursions, and Chip joined by age 11. While this is our first trip on the Allagash, it is Chip’s 135th.

Both Chip and Lani are so comfortable in canoes that they stand up to paddle sometimes. Chip does so to read the water and determine the best approach for the upcoming stretch that we’ll traverse. Sometimes vigorous paddling and steering finesse on the watercourse is what’s needed, or simply staying to one side to avoid rocky hang-ups. The Allagash flows north, so we’re going with the current. If you do start to get hung up on a rock, lean toward it, Chip advises, because if you lean away your canoe could really get stuck or capsize. (Two of the boys in our group learn that lesson the hard way when they flip their canoe the next day. All of their gear floats, and everyone’s okay.) We decide to stop early at a campsite on Round Pond. The rain has held off, and we can air out our tents and gear. No one is letting the dampness ruin the mood. Assistant scoutmaster Bill Batdorf laughs and says, “I didn’t come up here to stay dry.”

It’s fascinating to watch everyone set up camp, gather and chop wood for the cooking fire. I’m especially interested in the Cochranes’ cookery. From the canoes they bring numbered wooden crates called wanigans that hold pots and pans, pantry ingredients, and fresh food, and they each set up separate cooking stations to cook for half the group. The duplicate camp kitchens are necessary because the Maine Department of Conservation allows only a certain number of guests and guides to travel together. If two groups share a site, they must have separate cooking stations. The result for us is that we get to see the pair cook the same meals, but with slightly different techniques. Everything is made from scratch, including breads and cakes baked in a fireside convection oven that looks something like a metal breadbox or mailbox. The meals are often what Chip’s grandfather and father cooked on trips through the decades, including spaghetti and meat sauce with sesame yeast rolls; grilled ham with pineapples, sweet potatoes, and creamed corn (the combination is really good); and hot breakfasts featuring scrambled eggs, big pots of oatmeal, pancakes dubbed “North Woods crepes,” and plenty of hot tea, cocoa, and strong camp coffee.

After a night on Round Pond we paddle over to a natural spring and refill the jugs with fresh water that’s so cold it will numb your hands. On the river, we remain in two groups of five canoes each, with Chip leading one group and Lani leading the other. At the Ramsey Ledge campsite we reunite, and finally there is sunshine for a full afternoon. After setting up camp, we meet back at the bank for a lesson in canoe poling. Both Lani and Chip have won national championships in this sport, which involves standing in a canoe and pushing a long pole into the river floor to move the canoe upstream or downstream. We’re on a bend in the river with a sandbar island in the middle. After the demonstration, we spend the afternoon swimming and trying out some of the techniques. Poling looks and feels like sliding across the water. At one point we come across some of the boys involved in a game of “taking” an island, and it reminds me of a scene from Lord of the Flies. That’s another thing about these Boy Scouts: they’re curious and they play in those old-fashioned ways—no computers or phones needed.

The next day, we’re finally nearing Allagash Falls, a place we’ve talked about each day of the trip. It’s a 40-foot drop in what we understand will be a tremendous rush of water. Here’s the most important part: you cannot go over the falls in your canoe. We’ve heard the story of two Girl Scouts (not one of the Cochranes’ trips) who somehow missed the portage exit. Luckily, their canoe became hung up on a rock within 20 yards of the falls, and they were able to get out safely. People recall that the canoe was stuck in the current against the rock for weeks before it finally dislodged, went over the falls, and broke in two. We will not miss that exit, I tell myself.

When we get there, it’s not even a close call. The “DANGER FALLS AHEAD” signage is bold and clear, and soon we’re all safely on shore for the pre-falls stop and portage, after the heavy lugging of canoes and gear down to the other side of the massive tumble of rocks that creates Allagash Falls. The water is frothed white from the churning. As thousands of gallons splash past, Chip shows us another tradition: jumping from a high ledge just beyond the falls into a deep pool below. He demonstrates a back flip that he says he first learned to do there when he was a kid. Lining up with the Boy Scouts, almost all of us take the leap (no other takers on doing a backflip, though), and the plunge feels like a celebration after the days and miles of canoeing. The buckets of rain had turned to brilliant sunshine, and even if you weren’t still a teenager, I think we all felt like one up there on the wild waters of the Allagash.