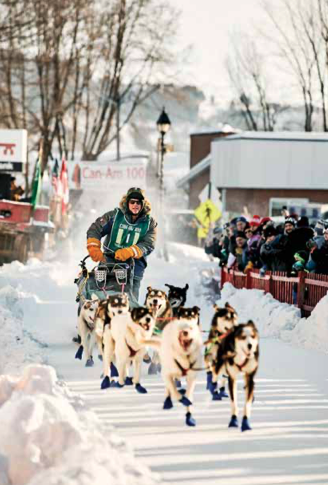 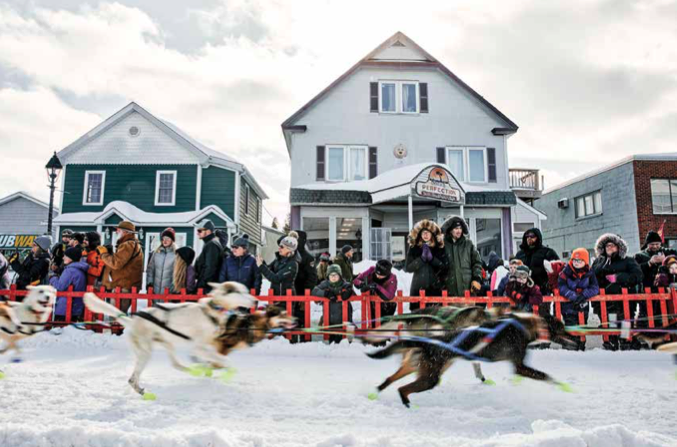 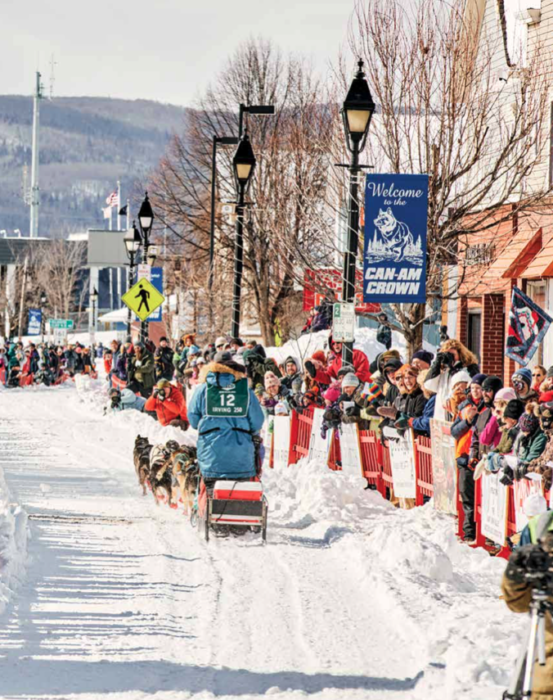 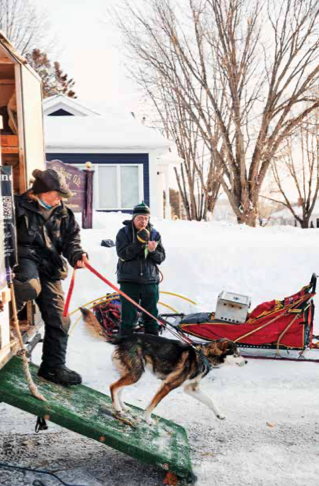 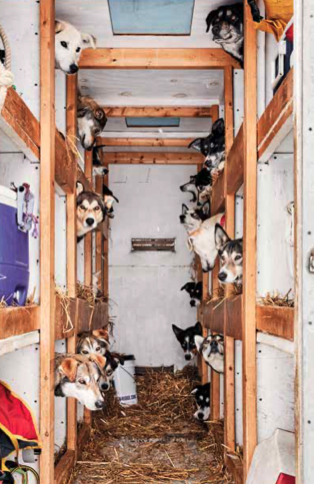 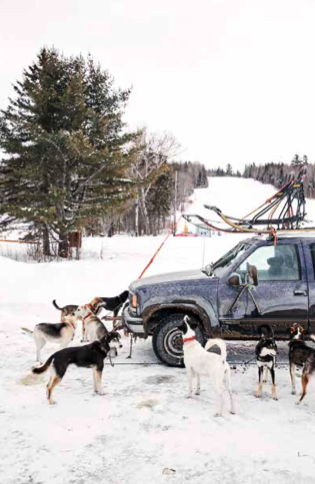 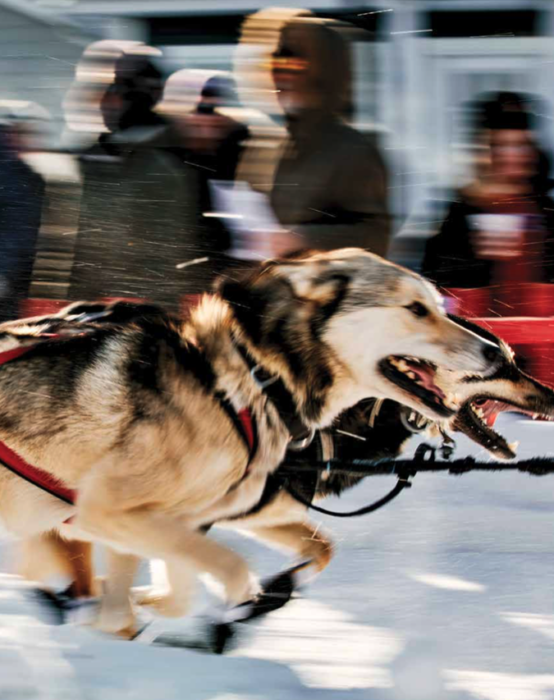 An Inside Look at Covering a 250-Mile Dog Race

The writer and photographer of our story on the Can-Am Crown International Dog Sled Races discuss what it was like to cover the event.

Last February photographer Michael D. Wilson and I traveled to the state’s northern border for the Can-Am Crown International Dog Sled Races, which take mushers hundreds of miles through Maine’s wilderness. The three races of 30, 100, and 250 miles all began in Fort Kent’s downtown the morning of Saturday, February 29, and the winner of the 250-mile trek didn’t finish until more than 48 hours later, on Monday, March 2. While our story focused on two racers, Ashley and Mark Patterson of Shirley, we were there to capture as much of the race as possible, from the initial veterinary check when mushers arrived at Fort Kent’s Lonesome Pine Trails to the starting line with thousands of spectators to mushers in the 250-mile race arriving in Portage for the first of four checkpoints. I spoke with Michael this winter about our weekend in Aroostook County covering the race.

What was the most memorable part of the weekend?

One of the things that was the most impactful was just the community draw of the event. When I was in Portage for the first checkpoint, it was 9:30 or 10 p.m. and had been dark for hours and the entire town was at the checkpoint volunteering and just hanging out. I obviously didn’t grow up with dogsledding, but there was something about that that felt very nostalgic—it was that community aspect. That was really great to see. And I think the other thing that really was powerful is how dedicated both the dogs and the mushers were, particularly the amount of training that goes into it. Then how quickly it goes from finishing a race to feeding dogs and packing up and getting out. And it seemed chaotic to me as a non-musher. So, to watch this happen was like watching some sort of dog-human ballet take place.

What was the most challenging part of photographing it?

I don’t think I really grasped how big the event was, the physical space that it takes up. I didn’t grow up with dogs, but I have this sense of dogs in a way different capacity. The fact that they covered 30, 50 miles in a single day. Driving down to Portage, it was an hour drive to get there. I think the size of the race was really something I wasn’t prepared for. It felt so overwhelming because of the size of it. The biggest challenge was trying not to have repetitive imagery, trying to figure out how to show an angle of it that wasn’t just an overall view that somebody might get if they spent a half hour there shooting.

Another other thing was—I knew it was going to be this way, but I wasn’t really prepared for how elevated the dogs would be. I know that sounds dumb because it’s called dogsledding not human sledding, but I just didn’t really understand. I think the way that I perceived them was different than I would a pet. I don’t think I’ve ever seen dogs happier than these dogs were at the end of a 30- or 100-mile race. They were in their element. It was like watching a kid in a candy store. That was what they were born to do.

I saw some finishers of the 30-mile race, and the dogs didn’t seem that tired at all. They were jumping up and down. They didn’t really seem that much different than they were at the start of the race.

Even the 100-mile, which ended at night, some of those dogs came in, and they were barking and excited. I actually think one of the most beautiful parts was watching them finish. There are all these people around that need to check things, vets and official timekeepers, and the mushers would just—it was like tunnel vision to get to their lead dogs to make sure they were OK. That interaction was really powerful to watch, seeing them just rush to the front and how excited the dogs were. Even after a hundred miles, they were jumping and barking and ready for more.

The element of mutual respect between the mushers and the dogs surprised me a bit. The dogs have to respect the mushers in order to listen. And it’s clear that when Ashley would go up to one of her dogs, it would be very different than if anyone else walked up to her dogs. They have this bond and relationship that I don’t think you see in a pet relationship, just because you’re not going through such a harrowing experience of running together for hundreds of miles.

That’s a really good way to put it. There’s a sense of shared experience that I don’t know that I’ve ever seen between humans and animals before. I think that it’s tough for dogs because they’re running, and it’s tough for mushers because they’re controlling the sled, and the cold. It seems like a challenge for everybody, and this bond forms that I don’t know that I’ve ever witnessed before between humans and animals. It was a really cool experience to see.

How did that series of musher portraits come about and how was it to interact with them after the race?

I had wanted to do something with the faces of the mushers, and I wasn’t really sure where. After the 100-mile race finishes, they have an award ceremony, and I thought I would just set up a small studio there really quick and take some portraits. I actually didn’t know how it was going to go. The race director was there, and he was like, “Oh, I’ll send people over after they get their awards.” It was fast. The people would walk up and get a couple of quick pictures and they’re gone. In a weird way, it worked better than spending time with each person. That’s not really my style of shooting, but there was something about the sort of quick turnaround and regiment that made for a compelling set of portraits. I also liked that it was the day after the race. They’re mostly lit from the sun coming off of the ski hill there at the Lonesome Pine. I just put a little piece of white silk up as the background. I like that the people are squinting. Something I wanted, too, was that intensity that comes along with being on a sled and being outdoors in the winter. I also really appreciated people’s wind-burned faces and the sunburn that people had a day after the race.