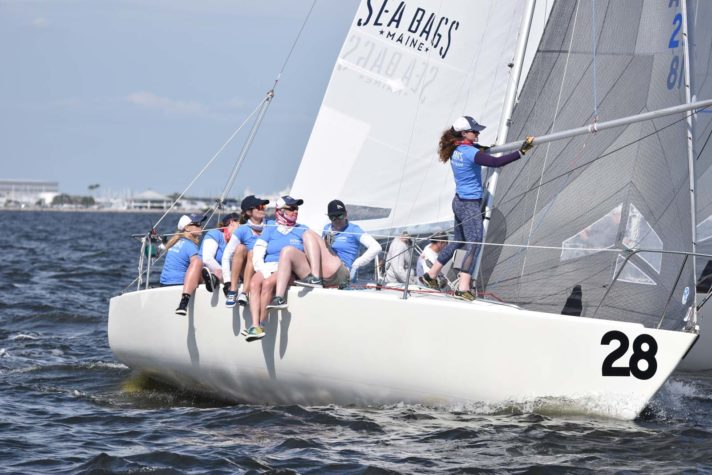 Sea Bags Women’s Sailing Team captain, Erica Beck Spencer, remembers her “ah-ha” moment. A lifelong sailor who has raced sailboats since college, Spencer was competing as a member of a coed Maine team at the 2014 J24 World Championship in Newport, Rhode Island, when she realized that, out of 72 teams on the water, there were very few women at the helm and even fewer all-women teams. She made a promise to herself—in three years, she would go to a world championship with an all-women team, and posted her goal on Facebook. Fellow Maine sailboat racer Jess Harris was looking to buy a boat but didn’t have a team lined up. She replied to Spencer: “Let’s do this together.” They spent six months looking for the perfect J24, one of the world’s most popular sailboats, which they named Wait for it…

After two years of training on Wait for it…, in 2016, Spencer, Harris, and four other members of the Sea Bags Women’s Sailing Team raced in their first international event at the J24 North American Championship in Ontario, placing twentieth out of 46 teams. The following year, at the J24 World Championship, they won the Jaeger Trophy as the top women’s team, and Spencer, who “drives” the boat, took home the Top Female Skipper Award. The team now averages about one regatta monthly from February to October and has traveled as far away as Mexico to compete. As co-founders and co-managers, Harris and Spencer are the core of the group, which includes a total of 11 women, ages 16 to 57—six of whom race at a time. None of the women, residents of Maine, Rhode Island, New York, and Florida, are full-time sailors. They are moms, students, and professionals who have made this challenging and exhilarating sport a priority in their lives. “We have such a deep bench of amazing women who love to race hard,” says Spencer, an educator and mother of two. “When I’m racing with them, I never question their strength or skill because I know they are every bit as good as anyone else out there on the course.”

Founded in Maine in 1999, and headquartered on the Portland waterfront, Sea Bags has a history of supporting the Maine sailing scene—a natural connection given its signature tote bags and other products are made from recycled sails. “The Sea Bags Women’s Sailing Team is a great face to our brand in sailing,” says company President and COO Beth Shissler. “These women are role models and competitive sailors and true advocates for everything we believe in. Their authenticity and love of sailing make us natural partners.” Team members serve as Sea Bags brand ambassadors, spreading the word about the company’s mission, and sometimes acting as the means of transporting sails back to Maine. “We meet people on boats from all over the world that have old sails,” says Harris. “We’ve all known Sea Bags as customers, and we all love the brand in terms of what it stands for: sustainability and recycling.”

In 2019, the team’s goals include a repeat of the Jaeger Trophy and the Top Female Skipper Award, and qualifying for the 2020 J24 Worlds in Poole, England. You can help the team reach these goals with the purchase of a Sea Bags Women’s Sailing Team Tote; 20 percent of the sales support the team’s racing efforts.

Support the team with the purchase of a Sea Bags Women’s Sailing Team Tote. Visit Seabags.com/sail 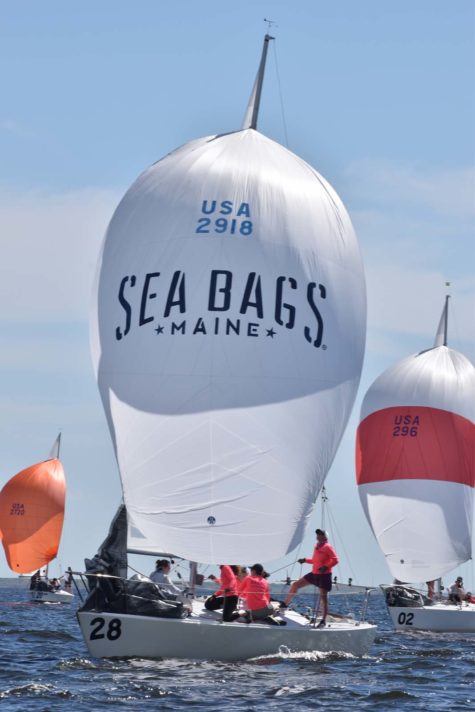 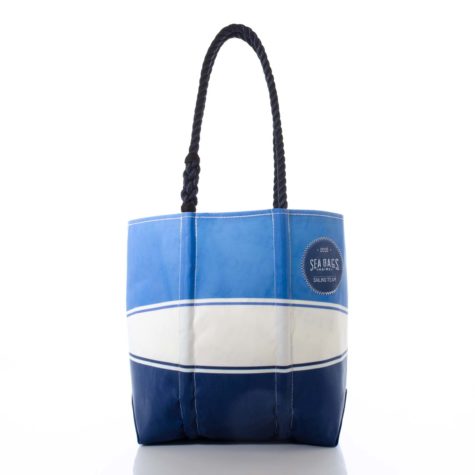