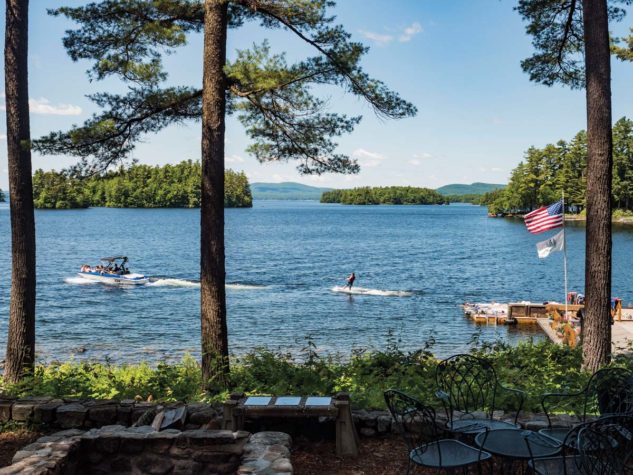 The next morning after breakfast we watch the ski boat pick up the day's first rounds of waterskiers, some choosing slalom skis to try. 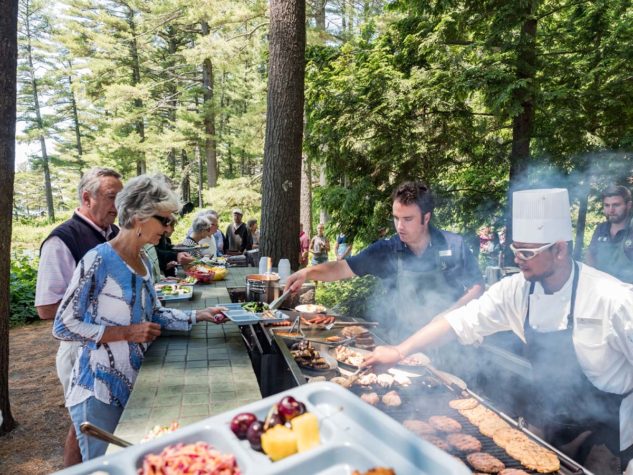 Friday afternoon lunch is served by the lake 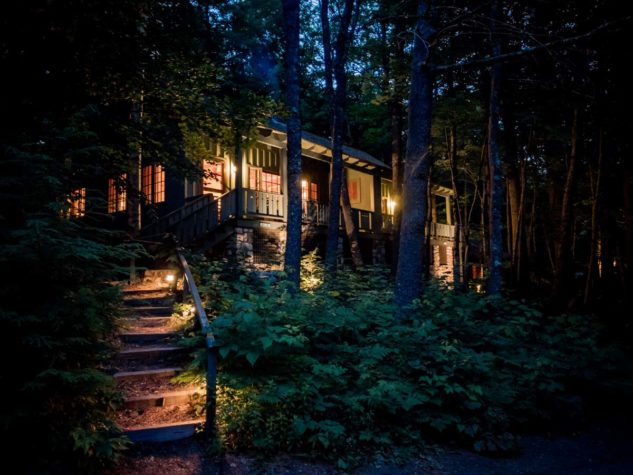 One of the cottages at Migis Lodge 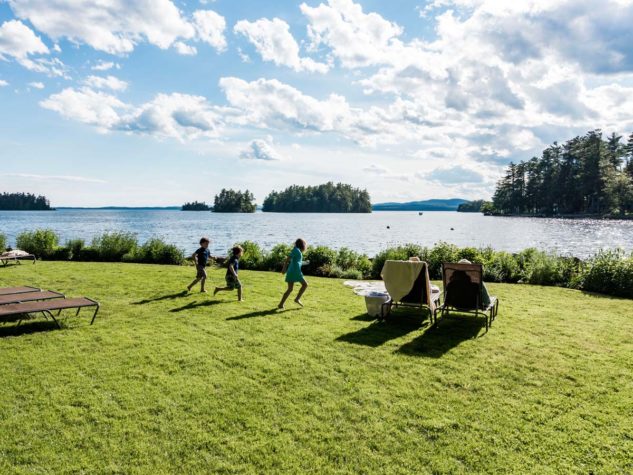 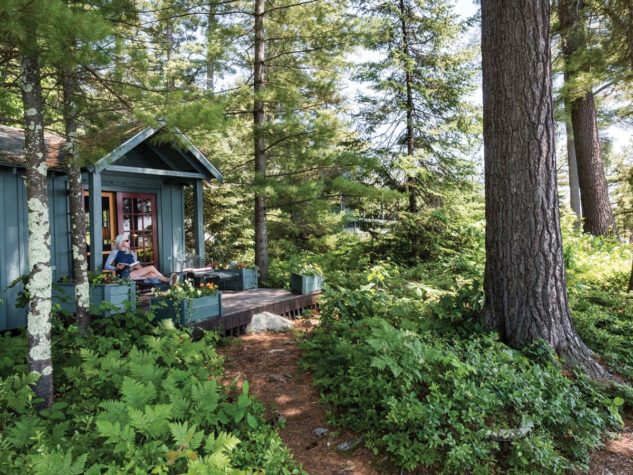 A typical Migis Lodge cottage with a porch facing Lake Sebago; connected to the beaches and lodge by a network of paths through the ferns and trees. 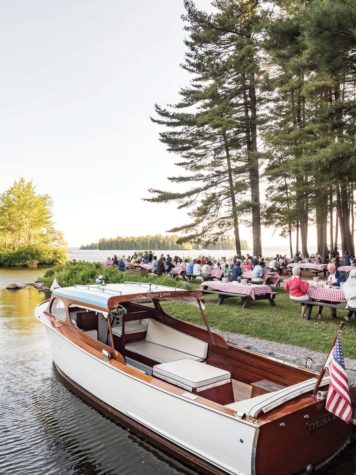 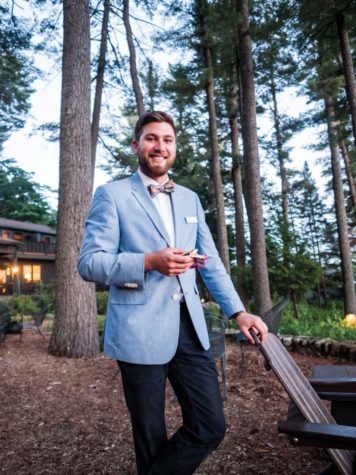 Many of the staff at Migis grew up or attended college in New England. Colby Phillips from Wethersfield, Connecticut studied at the University of Southern Maine. 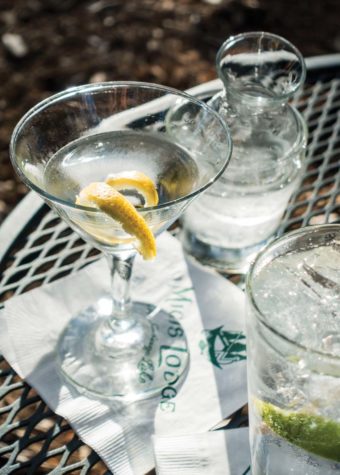 Boating, swimming, and lakeside cocktails at the 100-year-old Migis Lodge on Sebago Lake

Several teenage boys wearing blazers—navy blues and preppy plaids—are on the terraced patio at dusk at Migis Lodge. They’re leaning on stone walls near a fire pit that’s sending a few sparks upward between the towering pines. In the dining room and on the wide porch of the lodge, there’s the hum of conversation, and cocktails are still being poured. Sebago Lake shimmers below. I notice that each boy stops from time to time to check his jacket sleeves and shirt front to make sure all’s still tidy. This is one nattily-dressed dinner crowd. Besides the boys, who are discussing their respective boarding schools, there are parents and grandparents, couples and cousins, and dozens of other lodge guests of all ages. It’s possible to come in just for dinner, but most of the people here are staying in rooms upstairs in the main lodge itself, or in one of the property’s 35 cottages. I’m visiting with my favorite traveling partner, photographer Peter Frank Edwards.

During cocktail hour, he and I meet third- generation lodge operator Jed Porta, a youthful-looking 35-year-old whose parents are the lodge’s owners. He explains that Migis guests often stay for a week or more as part of multi-generational gatherings of families or friends. And dressing for dinner is more than a tradition. Jackets and collared shirts are required for men during the cocktail and dinner hours at Migis Lodge. The guests lean toward a classic look, L.L.Bean meets Vineyard Vines. Among all the seersucker pants and suede bucks, I hear bits of wide-ranging talk—about music theory, college plans (several of the young staff in jackets and bow ties are students at New England universities), and the pre-dinner lake cruise on the lodge’s prized 1947 Chris Craft boat. Even the cocktails being ordered on the patio are timeless, including plenty of trays of gin and tonics and margaritas. Is it 1966, 1986, or 2016?

It’s all part of the mid-June to September social season at Migis Lodge in South Casco, and the property happens to be celebrating its hundredth anniversary this year. This is my first visit to the lodge and to the lake. We’re here for a two-night chance to “steal away and rest,” which I’m told is the basic translation of the Abenaki word migis.

To get here, the drive takes little more than an hour from downtown Portland—even with a stop in Raymond at the Mosquito Ice Cream Shop for an orange cream shake (its like sipping a Dreamsicle). From Roosevelt Trail, we turn at the carved sign for Migis Lodge and follow a narrow road through the deep woods of tall pine and spruce trees.

Before long, we start to see neat stacks of firewood—split hardwood that’s waist high in places, lining both sides of the road. The neatly crisscrossed layers create fence lines and trail markers and build anticipation for finally catching sight of the green-painted cabins and the surface of Sebago Lake. The timber display is almost like Maine saying, “yeah, we’re rich in wood—let’s keep the fireplaces and campfires burning, even in summer.”

But first, park the car; around the cottages, much of Migis is a car-free zone. After we check in at the main lodge, one of the “cabin boys” offers valet parking in a lot close to the entrance. He uses a push cart to transport our luggage to one of the cottages that are clustered along pathways close to the lodge and shoreline. (Others may call his position valet or steward, but the young man helping us get acquainted with Migis, Nick Cote, is starting his second summer of living and working at the lodge while in college, and says he prefers the old-school sound of the “cabin boy” title.) Each of the cottages has been assigned a name instead of number. Ours is Daybreak, and within a few dozen yards of its lake-view porch are tennis courts, docks with kayaks, several sizes of sailboats and motorboats, beaches, and swimming platforms. Smoke rises from a nearby chimney on what appears to be a small cabin, but when I check it out, I feel the hot, dry blast of a wood-fired sauna.

At Migis, meals, waterskiing, and most boating is included. Everything is first- come, first-serve. Many guests leave their car parked for the entire visit; “No wallet, no keys, no worries,” says Cote. I feel lighter already.

While Moosehead Lake is about three times larger in square miles of water surface, Sebago is the deepest lake in Maine— plunging down 316 feet at its maximum depth. Glaciers helped to form the lake. All of these details lead me to think the water will be icy. But when I see a man step out of the water from swimming on the first evening, he describes the lake’s water temperature as “magnificent.”

The next morning after breakfast we watch the ski boat pick up the day’s first round of waterskiers, some choosing slalom skis to try. The lake’s surface often remains glassy flat until 9 a.m. or later, the day’s ski boat captain tells us. He’s Jack Fischer, a student at University of Massachusetts, who grew up on the water at his family’s place on nearby Panther Pond. On ski runs, the boat makes a wide arc to the Dingley Islands and Millstone Island, which Migis Lodge uses for summertime lunch excursions.

It’s a dry and sunny day—perfect, really— and on this end of Sebago Lake the flat water cooperates well into the afternoon. A floatplane lands and takes off a few times, always near a specific dock. While the ski boat continues to buzz around in big loops, we grab a Sunfish sailboat and try sailing for a couple of hours. Finally, when I’m feeling a little bit sun-scorched, we return to one of the docks, and I dive into Sebago. The lake temperature is 68 degrees, but all I feel is a refreshing coolness—and the water is as clear as the Maine potato vodka in last night’s martinis. We also decide that the morning swimmer was right. This is spa- like swimming for Maine, especially after we step into the sauna for a few minutes and then jump in one more time before cleaning up for dinner.

Chef John Strain is dropping lobsters into a huge cooking pot outside—30 at a time, and he says it will probably be 120 in all by the time everyone gets their fill. It’s Friday, when dinner is traditionally served outside on picnic tables for an old-fashioned lobster bake. The lobsters, Strain explains, were delivered to the lodge today by the lobsterman himself, “an old salt from Casco Bay.”

Guests are already starting to line up. But the chef does not look stressed at all for someone manning a pot of boiling water and in charge of feeding several dozen guests. Instead, he’s able to answer menu questions from guests and staff while he works, and he’s talking up the Karaoke Night he’ll emcee in a lodge hall later in the night. (He tells us that when it’s his turn at the mic, his go-to songs are by the Eagles.) The easygoing chef is in his thirty-third year at Migis. He recalls that Jed Porta was a toddler when he first visited the lodge for the job interview. “I thought I’d only stay five or so years, but look at this place,” Strain says, and gazes out at the water. “I ended up raising my own family here, and my kids worked here when they were growing up.”

So did Jed Porta, who says his first jobs at the lodge were pitching in to help wash dishes and sweeping up pine needles from the tennis courts—a task that has to be done twice a day on the clay court nearest our cottage. The trees shelter the court that closely.

Longevity and family are mainstays in the Migis Lodge history. Just four families have owned and operated it over the past century. The Porta family has cared for and owned Migis Lodge since the 1960s. First it was Gene and Grace Porta, who had previously operated resorts on Martha’s Vineyard and were looking for an inn to buy on the Maine coast. When they were shown Migis Lodge, they immediately changed their dream from oceanfront to lakefront. By 1978, their son, Tim, and his wife, Joan, had purchased the property (the couple met when Joan visited as a guest). “ Back then, I learned that there would be the largest transfer of wealth in American history,” says Tim Porta when we meet in the morning on the lodge patio. He’s looking out over the lake where he and Joan live in a house just down the shore, and he regularly takes guests out on the Chris Craft. “As part of that generational transfer trend, we could see the future of travel.”

The plan for Tim and Joan Porta would be to focus on attracting multigenerational guests. The Porta family continues to operate the lodge with a focus on families—as a place to gather year after year, with plenty of comforts, traditions, and activities for parents, children, and grandchildren. “Guests tell us that their lives are so busy outside of their stays at Migis that this is often the only week of the year that everyone gets together for a family dinner every night,” says Jed, who is in charge of the day-to-day management at the lodge.

The Portas renovate or completely rebuild one or two cottages each year in the off- season, and have been adding new ones. (Jed Porta says the number of cottages they have now, 35, is just about the right amount.) In the shoulder seasons, Migis Lodge often hosts wedding parties and other groups. Five years ago, one of those weddings was that of Jed and Landace Porta, who arrived and departed in the old Chris Craft, driven by Jed’s father, Tim Porta. The couple met while working together at Migis Lodge, and she’s now the general manager at another Migis Hotel Group property, the Black Point Inn in Scarborough.

There’s a particular Migis aesthetic; call it the Migis touch—including plenty of tradition and attention to detail. I’m reminded of how Jed Porta explained the elaborate wood piles. As long as he can remember, he says, the wood has been stacked while green, and then left to dry and season until it’s rotated in to wherever it’s needed for fires in the cottages, fire pit, and lodge. A simple system, yet every year, guests talk about how the stacks are getting more impressive, even akin to installation art. “We’re doing what we’ve always done,” Porta says matter-of-factly, modestly. “But I guess you could say that now we’re taking it to another level.” 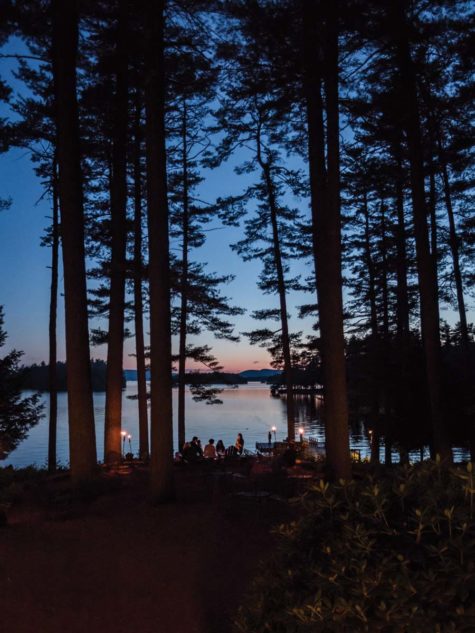 Sunset views of Sebago from the lodge porch. 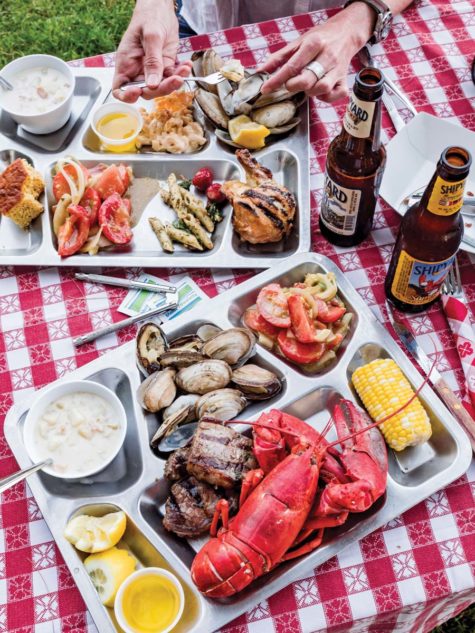 Lobster, chowder, and clams at the weekly Lobster Bake dinner and cookout. 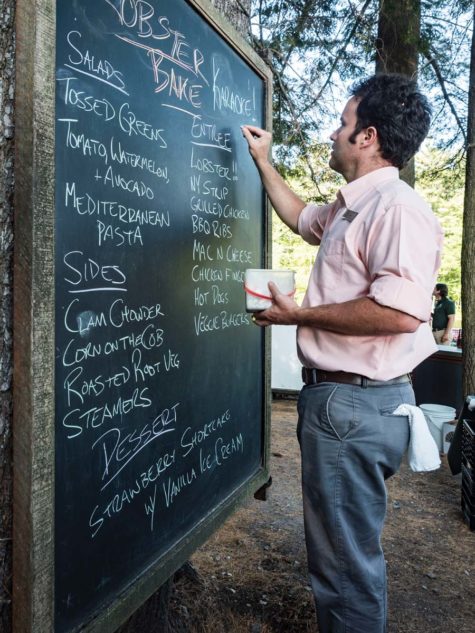 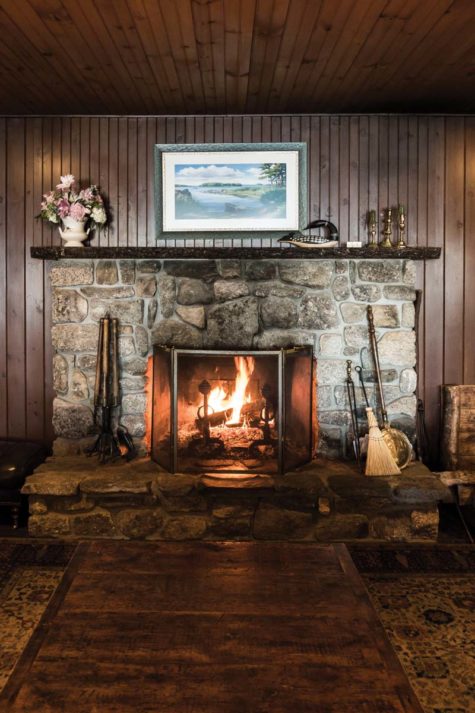 Near the fireplace are scrapbooks with mementos and pictures of guests, dinner parties, and fishing trips that Joan Porta is helping compile for an upcoming book about the 100-year history of Migis Lodge. 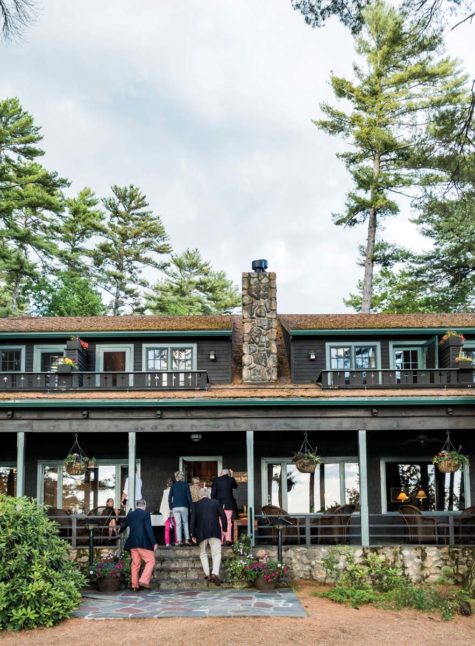 The Migis Lodge dinner crowd, in blazers and boat shoes.