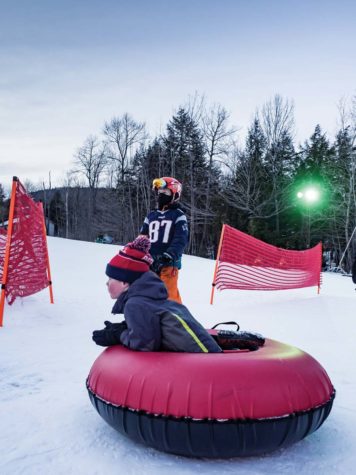 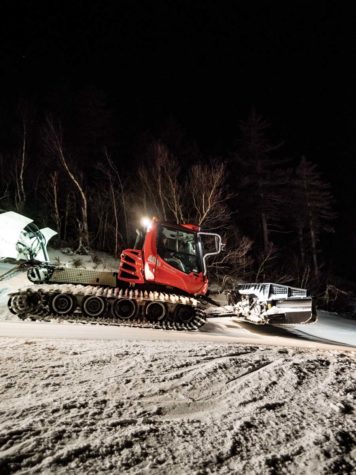 Snowcat operators drive the machines up and down the slopes to move and groom the snow at Sunday River 2 snow cat drivers - Joe Wheeler (doing it for 26 years), Chris Knight of Dixfield (8th year/season… he’s the younger of the two) 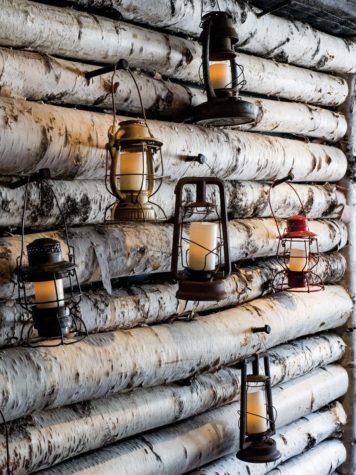 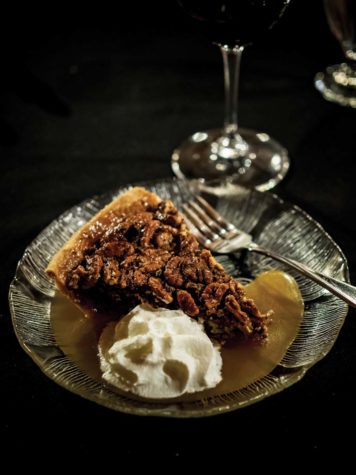 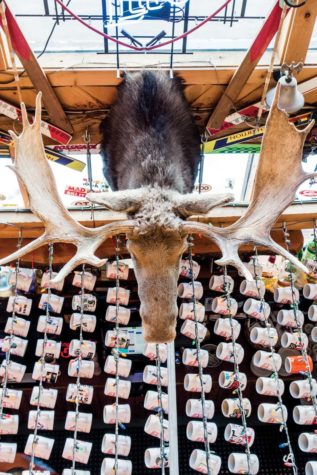 View from above the beer steins and moose at the Matterhorn Ski Bar on Sunday River Road, inspired by a ski bar in Switzerland 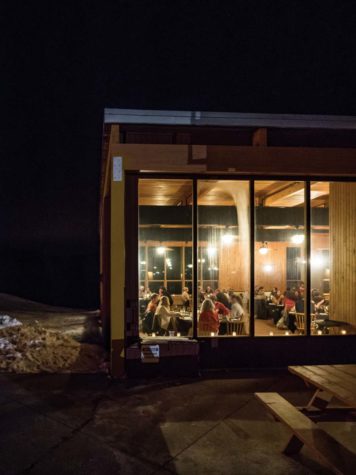 Dinner on North Peak at the Peak Lodge 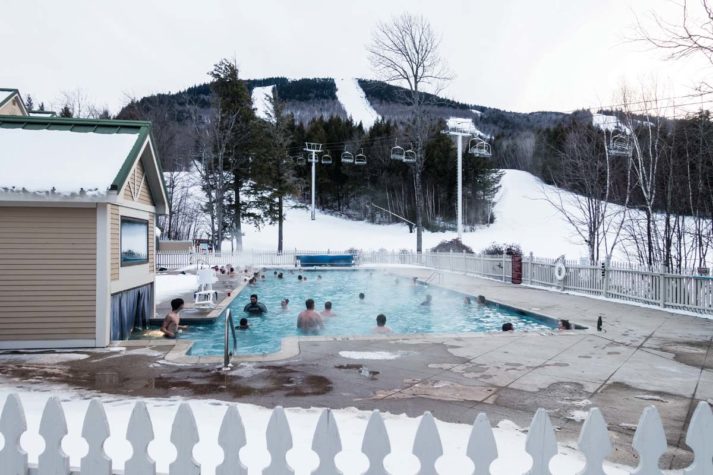 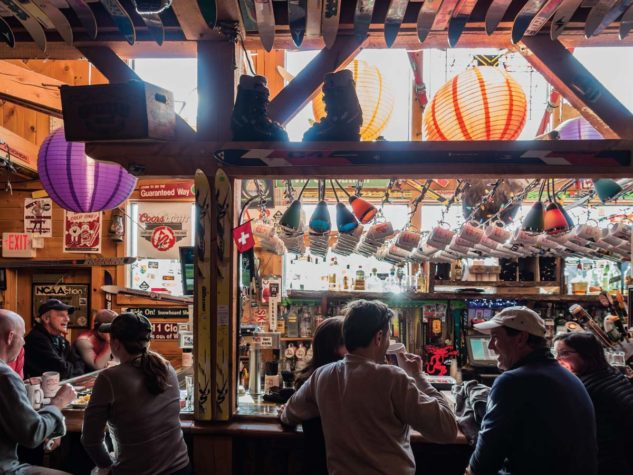 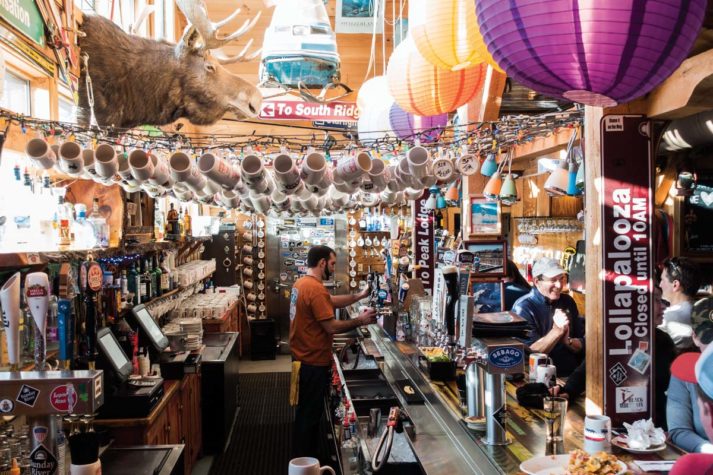 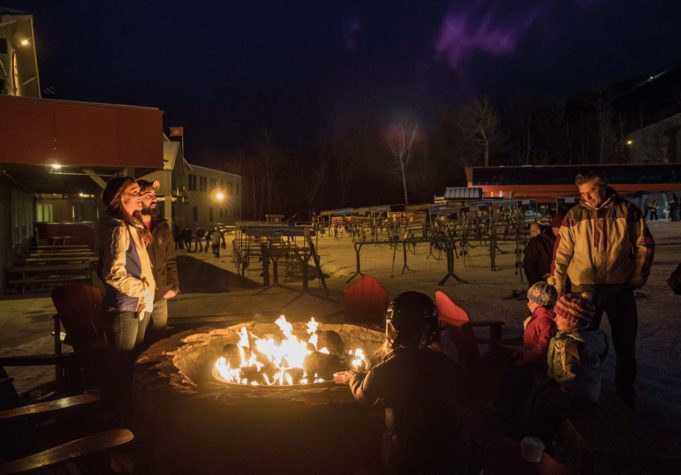 warming up by the fire outside the base lodge 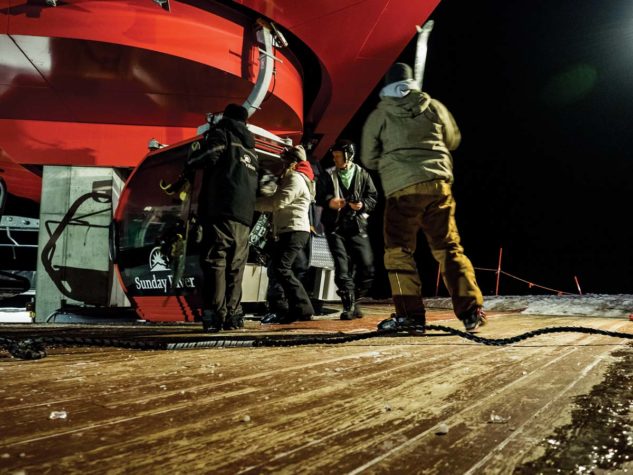 Evening activities at Sunday River -- loading up on the Super Quad 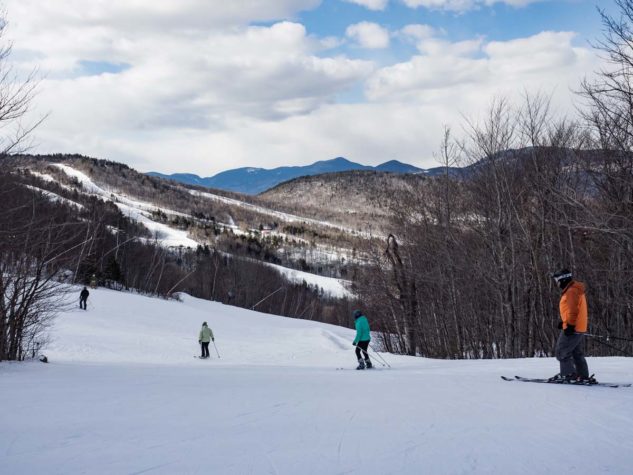 late afternoon ski after the crowds have departed

The mountain peaks we ski by day are in relief against the sky, blanketed and tucked away as temperatures dip and darkness falls. Yet, at Sunday River, the mountain scenery can be very much alive after dark—particularly on winter weekends when the lights are on and lifts run into the night.

It’s slate-dark in pockets up here on North Peak, especially as the Chondola makes the last couple hundred yards of vertical climb. Sunday River’s hybrid gondola-chairlift then slows just enough for riders to open the door and hop out (or, if you’re on a standard chair, to lean forward and slide off).

I’m struck by the quiet, and the whispering sound of the few snowboarders and skiers I see tracing the mountain downward—usually solitary figures or in small packs. The higher you go on the mountain, the fewer people you see in the darkening, chilly night session.

Once off the lift, I follow the points and pools of light on the groomed slopes. I watch for orange tape across the trails that aren’t lighted; the runs that are closed. To ski at night, I’m joining the diehards and the fearless kids.

On one run, I’m in the Chondola with three teenage boys; two are lugging snowboards and one is on skis. All are wearing goggles and helmets, and we start talking about gear. They can see pretty well in the limited light, they tell me, and suggest that my tinted goggles might not be the best for nighttime. I mention that the mountain trails are not as lit as I expected. “Oh, it’s lit out there,” they say with some sly, boyish laughing.

When we reach the top, the boys take off fast and drop into the slopes like skateboarders. “Ay caramba!” one yells from the start. I watch them go, and I hear them calling out to each other when I can’t see them anymore. Sure enough, I can see better without my ski goggles. I scan up and down the trails and squint to peer into the dim gray of the drift- covered woods. At that moment, I realize I’m the only person skiing on the North Peak’s Escapade trail. It’s just me and the snowy mountain.

Skiing on, I see that some of the parents and kids who took to the tubing park in the session’s first pinky-dusk hour are still on those hills, which are also lighted for the weekend nights. But the mobs that filled South Ridge Lodge in the late afternoon are long gone. I wonder if the ‘80s music at the Foggy Goggle has already stopped for the day.

When my hands become too cold in my gloves, I make my way to the round, outdoor fire pit on the slope side of South Ridge Lodge. That’s where I catch up with photographer Peter Frank Edwards, who’s been snowboarding and says the groomed trails are fast. I pull off my gloves to get my hands closer to the heat for a few minutes before we catch the lift again for a dinner up on North Peak at the Peak Lodge.

Besides skiing, a featured event at Sunday River tonight is a Peak Mystery Theater Dinner; on other nights in snow season the resort is known to light up the sky with fireworks, and host fire dancers or live music to accompany skiing, tubing, and ziplining. When we walk inside Peak Lodge, with its tall glass windows and wood-paneled walls, it’s been transformed for the occasion from its daytime use as a warm place for a snack and a break from skiing. Banquet tables are topped with candles and linens, and as we meet other skiers during the cocktail hour, we realize that some of the dinner “guests” are actors in the performance. A troupe based in Poland Spring, Mystery for Hire, is performing a whodunit murder script, and they improvise lines as they talk with the real guests. A zany storyline is set around a celebrity award show and the greedy actors who are all vying to win a prize. Each character has a motive and an opportunity to commit the murder, and the audience is asked to vote on who’s guilty. (I incorrectly thought it was Bud Wiser, the emcee in the purple velvet jacket who at one point balances a wooden chair on his chin.) The interactive show keeps the crowd laughing all through the four-course dinner— plus, we have views of the ski lifts and the snowmaking on the peaks just outside.

The next day, after hot coffee and oatmeal by the fireplace at the Snow Cap Inn, we hit the slopes again. This time the eight-peak resort is in bright, sunny daylight. There is a well- groomed base of dry snow, with a little bit of ice underneath, but not too much, and you can kick up a snow spray when you want to.

Starting at the South Ridge lifts we make runs in a lateral pattern across Spruce Peak, Barker Mountain, Locke Mountain, and White Cap. Our destination for lunch is the Grand Summit Hotel and the restaurant Camp, which is decorated in flannel and
birch bark as a modern tribute to nostalgic cabin life. There are lanterns on the wall
and a vintage canoe hung upside-down from the ceiling and fitted with lights. One of the specialty cocktails is named Corduroy, so cozy-sounding on a winter day that we order one to share, along with a steak sandwich and fries that arrive in the kind of small aluminum bucket used for collecting maple sap from trees around Newry and Bethel. We’ll be skiing all afternoon, so we end the Camp lunch with a melty flourless chocolate cake— for the energy boost.

Then we’re off again for the return runs, and by the time we get to the decks at Barker Lodge, an après-ski crowd is gathering. Inside, we sit with a group of Boston-area skiers who fill one of the long wooden tables near a fireplace built of large stones. There’s an old- school feel in this small pub, with photographs on the walls of skiers from past decades at Sunday River. Later, after we’ve finished our day’s ski, we make the short drive from the resort to see even more of the après-ski seekers (and ski memorabilia) at the iconic Matterhorn Ski Bar, open since 1995 and known for tall beer steins, live music, and the smells of hot pizza and garlic knots from the wood-fired brick oven.

Just after sunset that night, we return to the lodges and lifts—this time not to ski, but to gain a different perspective. From the mountain-facing side of Barker Lodge, I scan the now-empty ski runs and the vast, star-spiked blackness of the night sky. Temperatures are again in the 20s. All is still, and I’m watching for headlights—not from a car or a truck or snowmobile, but something that looks like a cross between a bulldozer and a spaceship. Before long, I hear the hum of engines approaching, and I see headlight beams tracking across the slopes. The sound and light move closer until two machines come into focus. They eventually slow to a stop in a broad, snow-covered expanse between chair lifts. The big cats are here.

These are the massive snow grooming machines called snowcats, part of the Sunday River fleet that buzzes up and down the vertical terrain each night during ski season (Snowmaking is a big deal at Sunday River. The resort puts more than 2,000 snow guns into action across the trails. In last year’s ski season, when the natural snowfall accumulation was well below average, snowmaking lasted from mid-October all the way to the first day of May.) We’ve arranged with two of the operators to ride along. Joe Wheeler has worked for 26 seasons at Sunday River, and he helps me step up to take the passenger seat in the cat’s heated cab. Instead of a steering wheel, there is a stick-controlled steering system that he uses to take us to the Sunday Punch and Ecstasy trails. “They made snow last night; let’s see what we’ve got,” Wheeler says.

When we push up over a hill, I can’t see what’s next in the whiteness and headlights, but I can tell that he knows every foot of the terrain. Trained to drive big machinery like dump trucks, bulldozers, and concrete mixers, Wheeler says he helped excavate and build some of the ski trails before he started grooming them. Tonight, he’s on the 4 p.m. to midnight shift, listening to NPR and to the engine, and working to scrape, plow, and groom the snow on the trails.

In other words, says Chris Knight, the second driver I meet, “You guys skied all the snow to the edges, and we’re trying to get it back to the middle.”

I’ve switched machines to ride along with Knight for the next round of grooming. The decline he’s working is so steep that I have to plant my feet on the floorboard and push backwards until I’m standing. The cab is configured so you can do just that and stay in the seatbelt. Knight, who’s been at Sunday River for eight seasons, is unruffled. It’s so warm in the well-insulated cab that he sips from cups brimming with ice. He’s out here most weekend nights during the season. He says it gets lonely, but he’s not bored, and the headlights sometimes suddenly shine on wildlife, including porcupines, bears, and foxes. “The biggest moose I’ve ever seen was in Jordan Bowl,” he tells me.

We don’t have a big wildlife sighting, but the snow views have been terrific on this trip— from the lifts, on the slopes, and definitely through the windshields of the snowcats. On the drive up Route 26 to Bethel the roads were clear, and we wondered we wondered if the slopes would be bare, too. Yet in Newry and at Sunday River—with summit elevations ranging from 2,140 feet to 3,150 feet—we’ve found plenty of ski terrain in a surprisingly snowy setting.

Before we leave, I have one more wintry goal. Throughout this ski mountain getaway, the ice rink just a few dozen yards from the rooms at the resort’s Snow Cap Inn has been tempting me. At the front desk, I rent a pair of classic white figure skates. The leather is stiff, but I get my feet into them and take off onto the oval of ice. Rising in the distance I can see the darkened ski runs. On one of the Sunday River peaks I see a roving field of light. It must be a snowcat. The guys probably have the radios playing, and the cats will keep the snow churning through the night, getting the slopes groomed and ready for those of us below who dream all year of the whitewashed mountain days (and nights) ahead. 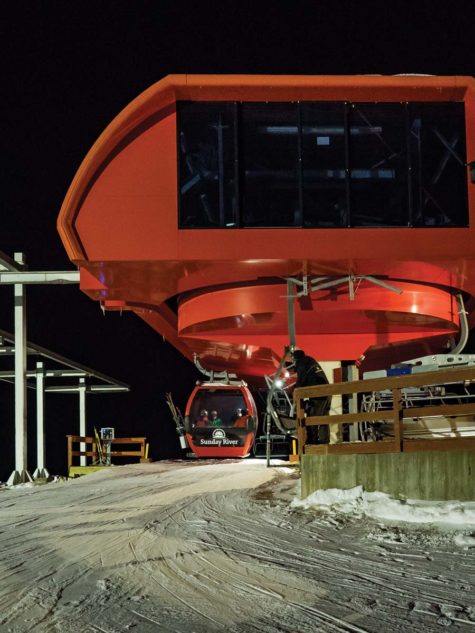 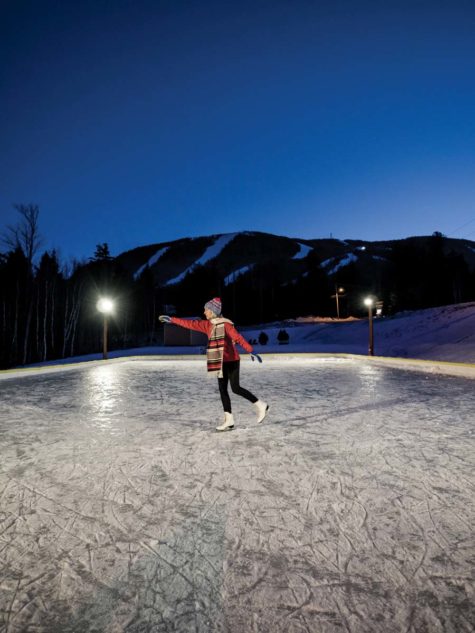 Mountain views from the outdoor rink near the resort’s Snow Cap Inn. 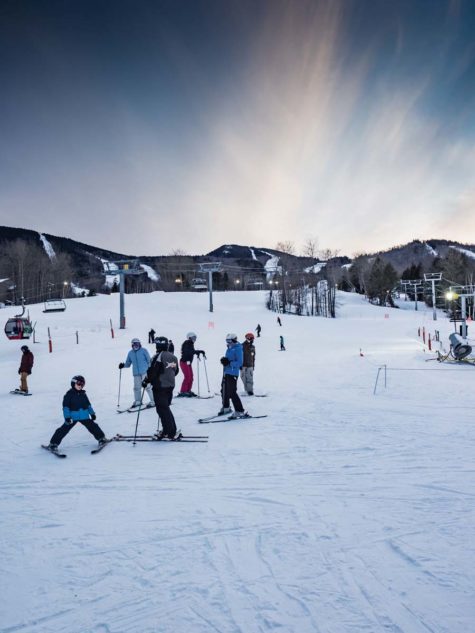 A night ski session starting in the late afternoon around South Ridge. 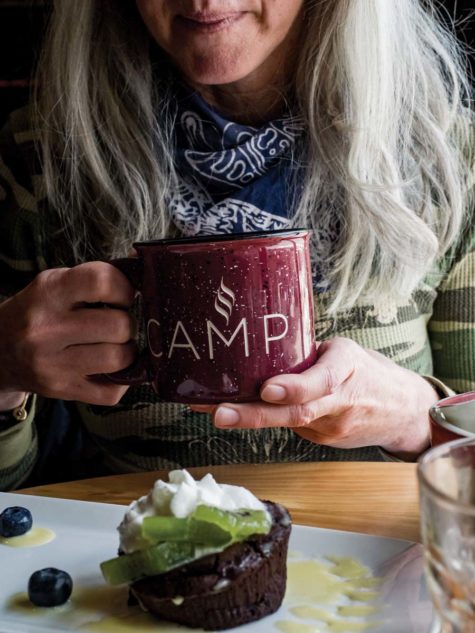 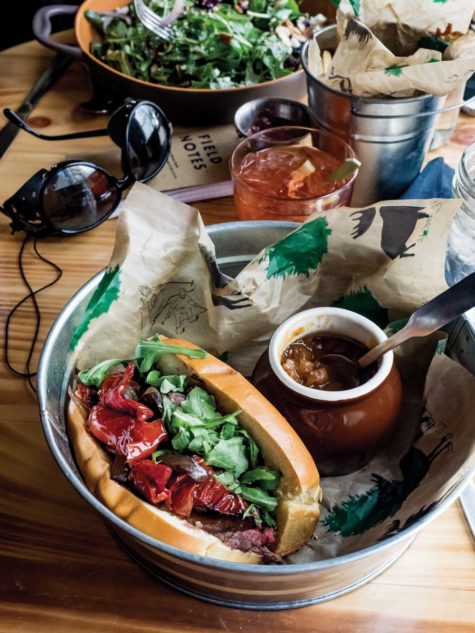 The steak sandwich and baked beans at Camp restaurant.