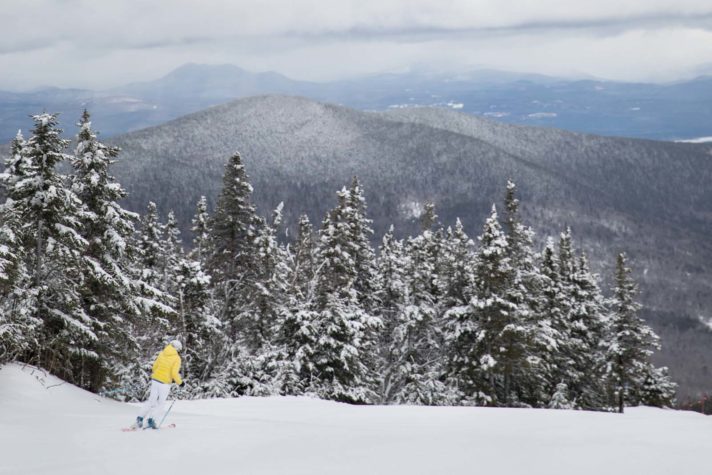 Gail Blackburn takes an early morning run on Upper Tote Road at Sugarloaf. The Bigelow Mountain Range is visible over the tops of snow-covered trees. 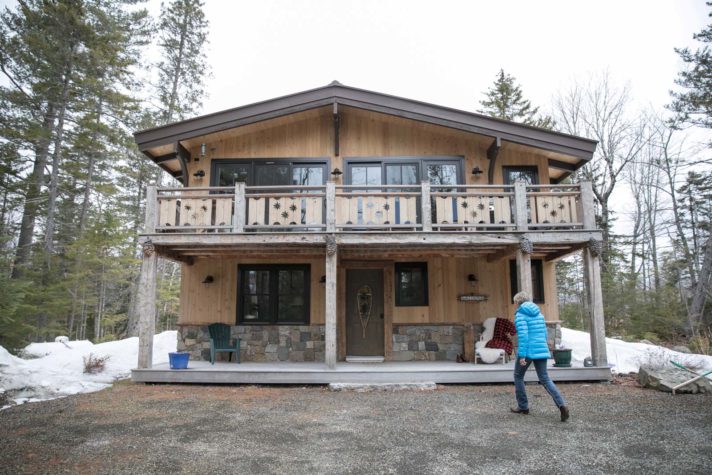 Blackburn has renovated her family’s old ski chalet in Sugarloaf Village 1—one of the original villages at the mountain—into a cozy year-round home. She extended the footprint by four feet under the existing roof to make room for new stairs. Pinecones hand carved by a local woodcarver decorate the tops of the columns on the first level, and Blackburn’s fondness for Switzerland is evident in the cutouts on the balcony bannister, which are the shape of edelweiss flowers. 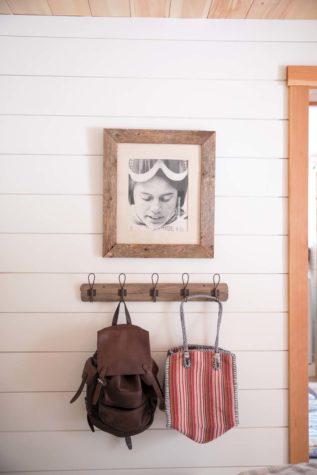 A photo of Blackburn at the starting gate in Val d’Isère, France, where she was in the first seed in the World Cup for the first time, and drew the number one start. 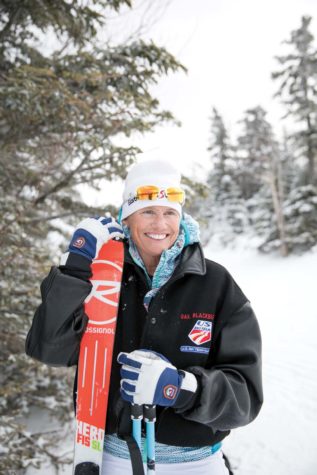 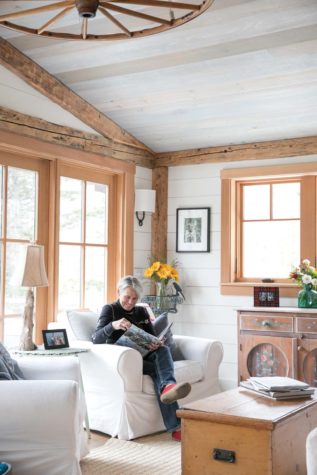 Blackburn in a corner of her light-filled living room on the second floor of the chalet. She added the nickel-gap walls and locally sourced beams. Her father made the wagon-wheel chandelier.

Defined by the Details

In a downstairs guest room in Gail Blackburn’s cozy, chalet-style home in Carrabassett Valley, a framed vintage poster hangs above the bed. The poster is from a 1971 FIS Alpine Ski World race, the one and only time the international racing circuit was held at Sugarloaf. Blackburn, who had grown up skiing on the mountain, was 16 then, and fast—fast enough to attract the attention of the U.S. Ski Team coaches and snag a racing slot. Her performance in the downhill ultimately earned her the distinction of being the first woman from Maine named to the national team, and she was only 17.

In a home full of skiing memorabilia, the poster is part of a collection that includes Blackburn’s collage of Sugarloaf season passes and a banister created from old ski poles. One of two posters given to her by a recent design client, it seems to represent the intersection of past and present, skiing and interior design—all of which are seamlessly stitched together in the rich life Blackburn has created at home, in her professional life, on Sugarloaf’s slopes, and in her travels. “I think the connection between interior de- sign, architecture, and ski racing is that it’s all about the details,” she says. “When you look at ski racing, it’s those minute details—seconds are often what divide first and second place—and learning how to perfect them. In design it’s learning how to put them all together and perfect them.”

Blackburn grew up in Brunswick, the child of athletic, outdoorsy parents who met at the Massachusetts hospital where they both worked—he as a pathologist and she as a physical therapist. “They would take the ski train to North Conway, New Hampshire, to ski,” says Blackburn. After moving to Maine—first to Bangor—they began skiing at Sugarloaf in the late 1950s, eventually bringing Blackburn and her two brothers along. Mountain amenities were few. “There used to be what we called the Little Red Lodge, about where the bottom of Double Runner is now,” she recalls. In 1961 her parents bought a building lot a short distance from the mountain and built a camp so the family would be able to ski every winter weekend. “We’d have trips up here in snowstorms, driving old cars with no snow tires, but somehow we always made it,” Blackburn says. “One time we arrived and we couldn’t get up the hill, so we unloaded the car, we put our skis on, and we skied everything into camp.” It was a tight- knit community in the little neighborhood of rustic A-frames and chalet-style houses in the shadow of Sugarloaf. On the mountain, Blackburn and her friends skied together and ate their homemade sandwiches for lunch in the lodge. “There wasn’t a lot of fluff and stuff,” she says. “We skied on old equipment. I remember borrowing race skis—it was just easy back then.”

Blackburn came naturally to racing. “At Ski-Horse Mountain when I was really young, the ski patrol told my parents I was going to have to learn to turn, I couldn’t just go straight down,” she recalls with a laugh. For high school, she attended Burke Mountain Academy in Vermont, then one of the only ski-racing schools in the country. In 1973, the year she graduated, she won the Junior National Downhill and Combined, and two years later she won the U.S. National Downhill Championship in Durango, Colorado, but narrowly missing making the 1976 U.S. Olympic Alpine Ski Team. She did, however make a TV commercial with Farrah Fawcett for Wella Balsam shampoo that aired throughout the Olympics. In 1978, while racing on the Women’s Pro Tour in Waterville Valley, New Hampshire, Blackburn hooked a ski tip on a gate and flew off a jump, badly fracturing her left leg and ending her ski-racing career. She was 23. Several surgeries later, that leg remains about an inch shorter than her right. “It’s created some back problems, but you know what? I’ve been able to work around it, and it’s OK,” says Blackburn. “I can still ski; I have a lift on my skis and a lift in my ski boots.”

Blackburn’s interest in architecture and design was also piqued at an early age. On sailing excursions with her family, she would photograph and sketch the classic shingle-style houses along Maine’s coast. “I’d sketch the little details, and it interested me, how it all went together,” she says. Her first career was in nursing, but after working closely with a builder to design her home in Durham, New Hampshire, she decided to go back to school. Blackburn completed a four-year accredited interior design program at Endicott College in Beverly, Massachusetts, while her two daughters were young. She spent three subsequent years studying for her master’s degree in architecture at Boston Architectural College—a program that required her to work in the profession while in school—before eventually deciding not to finish because the schedule was too grueling for her to spend time with her young girls. Over the course of two decades, she built her portfolio at firms in Massachusetts and New Hampshire, and she credits mentors she met along the way for helping her develop and refine her specialty: interior architecture detailing. “When I meet with a client and they say, ‘I have this idea,’ I can just sketch it out, do some little schematics, and they’re amazed,” she says. “After the design process, we almost always come back to some form of that original sketch and idea.”

With her daughters off on their own—Teddy in Salt Lake City, Utah, and Katie in Squamish, British Columbia—Blackburn decided in 2014 to move back to Maine, set up her own design firm, and make her home at Sugarloaf. “Even though my kids were born in and grew up in New Hampshire, they really feel that Maine is more their home because every winter weekend we came here to ski, and in the summers we went to visit Grammie and Grampie on the coast,” she says.

Having fallen in love with Switzerland while racing with the U.S. Ski Team in Grindelwald, Blackburn created a Swiss-inspired home in Carrabassett Valley, transforming her parents’ old camp into a charming, deeply personal space where her passions for the mountains, her family history, and thoughtful, creative interior design are evident in every room. On the first floor are a large mudroom entryway with ample storage for ski gear, two guest rooms, and a bath. The main living area is on the second floor, a snug yet sunny space with an open-plan living room that opens onto a wide balcony, dining area, and kitchen with red cabinets from Crown Point Cabinetry. At the back are Blackburn’s office and the owner’s suite, with a four-poster bed draped in a red-and-white-striped coverlet and rough-hewn beams framing the walk-in closet. Throughout the house, Blackburn has incorporated the colors of the Swiss flag—red and white—along with finds such as the Swiss folk-art cabinet that hangs in her bathroom. The balcony railing cutouts are edelweiss flowers. She has also retained favorite family pieces, including a rustic round chandelier made by her father that hangs in the living room, and every Christmas she creates a ski tree—a longstanding tradition with Teddy and Katie—of old family skis and poles draped with lights. Blackburn’s now 98-year-old father took his last run at Sugarloaf five years ago. A pair of his boots, handmade by famed bootmaker Peter Limmer, has pride of place in the entryway.

On the slopes in Grindelwald, Blackburn promised herself she would one day have the means to spend time in Switzerland every year, a promise she has kept. She hasn’t skied in the Swiss Alps since the 1970s, but she hikes there each summer, sometimes with her daughters or friends, in some of the places she used to race on the World Cup circuit. It’s easy to imagine that Switzerland’s appeal lies not only in its snow-covered mountains but also in the legendary Swiss attention to detail. The country of watch-making and on-time trains, it’s also where you’d be hard pressed to find a scrap of trash in the high-alpine mountain towns, and even city apartment buildings have window boxes spilling over with colorful flowers. It’s quiet and orderly, which Blackburn seems to crave at home in Maine. “I’m fine driving around Portland, which I have to do because of my profession, but if I had my druthers I’d stay right here,” she says of Carrabassett Valley.

In ski season, Blackburn avoids the weekend crowds, instead getting her runs in early on weekday mornings. “When you get up and the sun’s shining, you can see the mountain and the trails and there’s not a breath of wind, and it’s a Monday and you know there’s fresh corduroy. I can go out and ski for five, six runs and say, ‘OK, I’m done. I’m going to go home now and work for six hours,’” Blackburn says. On the mountain carving turns or at her desk sketching ideas for her next residential project, for Blackburn it’s always about the details. 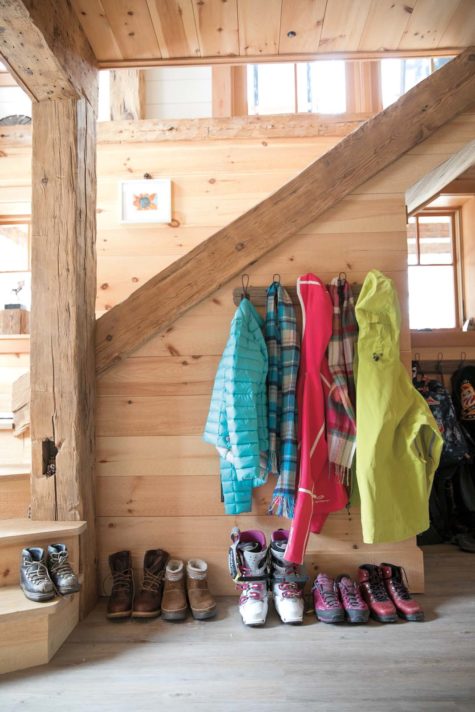 The home’s entranceway/mudroom offers plenty of storage for jackets, boots, and ski gear. 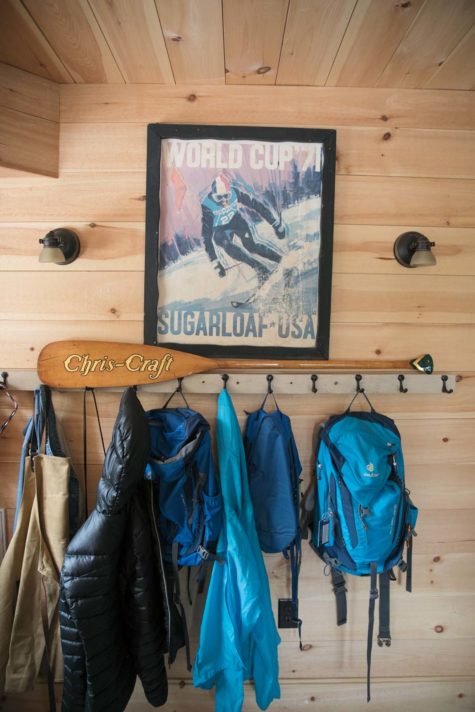 One of two posters from a 1971 FIS Alpine Ski World Cup race held at Sugarloaf, given to Blackburn by one of her architectural design clients. 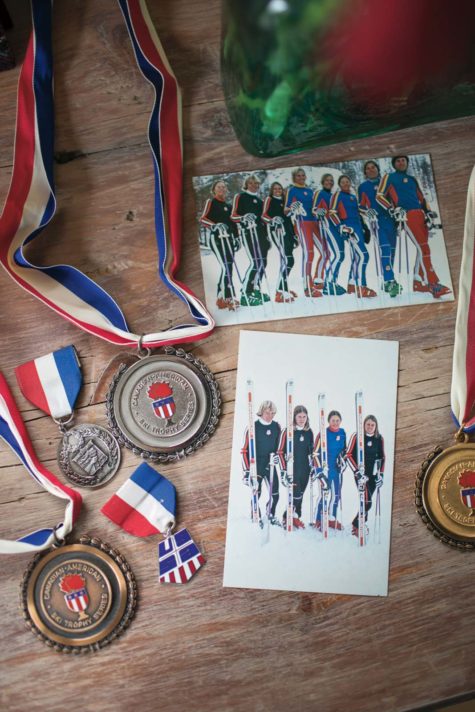 Postcards of the 1976 U.S. Ski Team advertising Yamaha skis and poles, and some of Blackburn’s skiing medals.