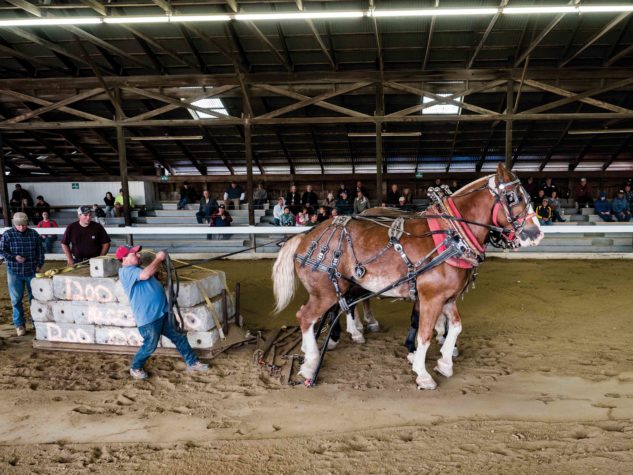 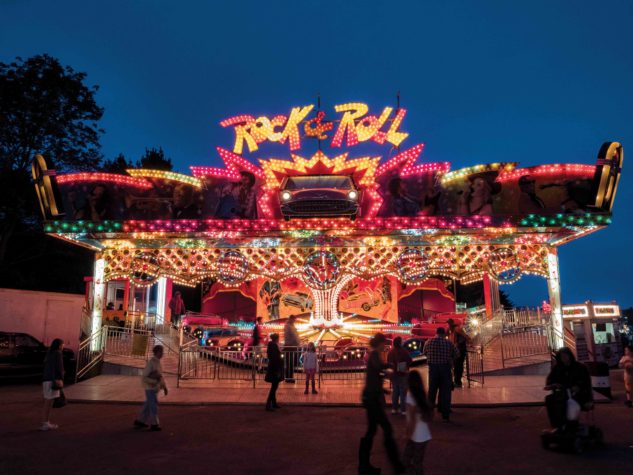 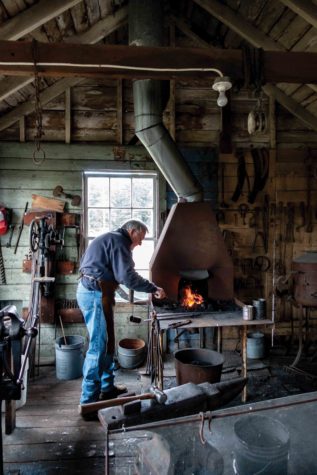 During a demonstration in the blacksmith shed, Sam Simonson explains that “if the iron’s black, it won’t move. If it’s red or orange, it will.” 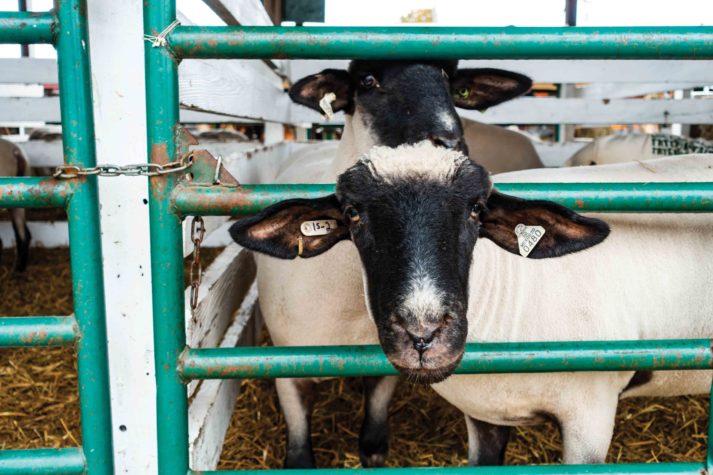 A sheep in the livestock barns. 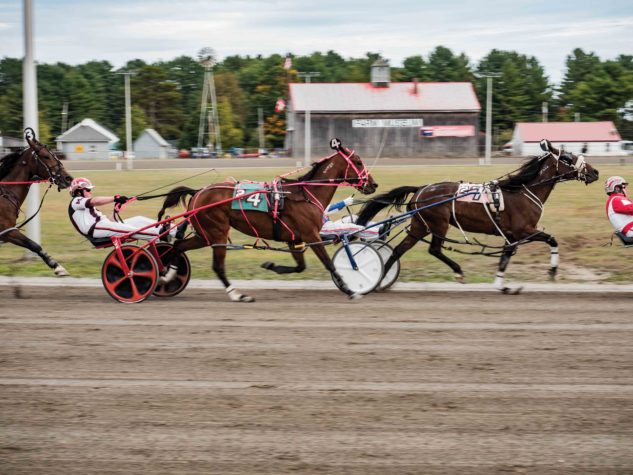 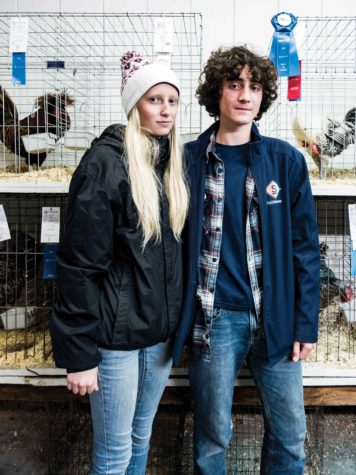 Taylor Davis of South Portland and Luke Weiser of Lebanon touring the poultry barns. “Every year we come to the fair,” Davis says. “I’ve already seen some other kids from my school.” And Weiser says his family raises chickens, and he’s even taken a pet rooster on the family sailboat, noting “that chicken has its sea legs.” 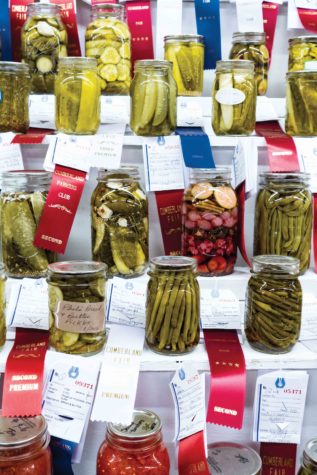 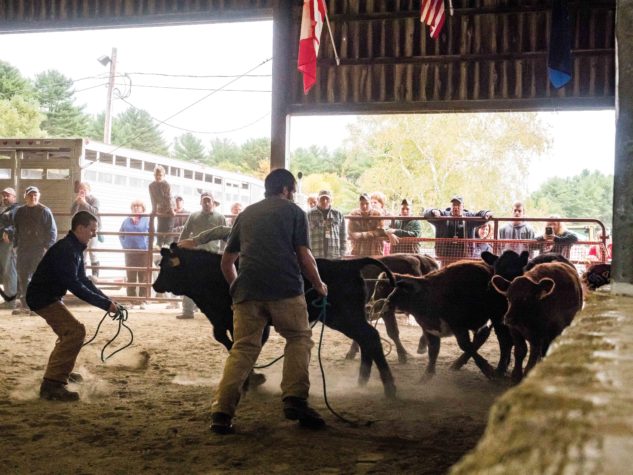 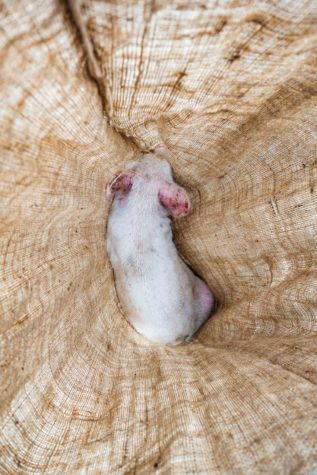 In the Pig Scramble contest, the winner’s prize is a pig in a sack to take home to raise. A 10-year-old from Gorham who won says he’d name his pig “Maple.”

Farm Feats on the Fairway

Every September since 1968, the weeklong Cumberland Fair has drawn crowds to see its agricultural triumphs—the biggest pumpkin, the glossiest-feathered hen, the strongest oxen team—and modern attractions, such as monster trucks and laser tag.

“Get in there and grab your bacon!”

The fans are standing now, clapping and yelling from the bleachers in the Pulling Arena. Eight young pigs have just been let loose onto the dusty floor, and they’re scattering and squealing in all directions while the same number of boys and girls chase after them. This is the Pig Scramble, and the challenge is to catch one of the swine however you can—typically by the back legs—and get it back into a burlap sack. The winner gets to take the pig home to raise.

It’s just one of hundreds of agricultural events and contests at the mammoth, weeklong Cumberland Fair, which attracts up to 10,000 people a day to the fairgrounds in Cumberland—effectively doubling the population of this town ten miles north of Portland. Organized by the Cumberland Farmers’ Club, the fair will be held this year on September 23 through 29.

The action is tamer in the realm of the horse paddocks, University of Maine Cooperative Extension 4-H barns, and show rings located just off the midway. Other structures on the over-100-acre fairgrounds are lined with stalls for milk cows, steers, draft horses, goats, sheep, pigs, and all manner of poultry and waterfowl, from chickens and turkeys to ducks, geese, and quail.

On the midway itself, a Ferris wheel turns, other rides spin, and whiffs of cotton candy, french fries, and barbecued turkey drumsticks float in the air with the sparkle of dust. Near a rise of bleachers and a field house are the rhythmic sounds of horse hooves rounding the half-mile dirt track in a harness race.

Tradition reigns at the Cumberland Fair. On one of the fair nights, several men are organizing the bean-hole baked bean cookery. They have dug a hole near the oval dirt track and lit a wood fire large enough to get ample hot coals for keeping a cast-iron pot of beans cooking overnight. Antique tractors roll past, and visitors can watch noisy vintage farm machines splitting wood and grinding corn. There’s a maple sugaring house and a blacksmith shed, both with live demonstrations. And forklifts are needed to move the nearly car-sized pump- kins at the Maine State Pumpkin and Squash Weigh-Off. The biggest are often in the range of 800 to 1,000 pounds.

“If we ever lose fairs, we’ll lose a bit of our state,” says educator and longtime fair president Mike Timmons, 76, who recalls having missed only two years of the Cumberland Fair, when he was in Orono for college. The former principal of Windham High School, Timmons lives steps away from fair offices. And he notes that the fairgrounds are now kept in use year-round: for the Vintage Bazaar, dog shows, a children’s circus, and other events.

Organized to attract families, the Cumberland Fair as an introduction to agriculture, according to Timmons, and his hope is that, for some of the youngest visitors, “It may even spur a lifetime interest in farming.” 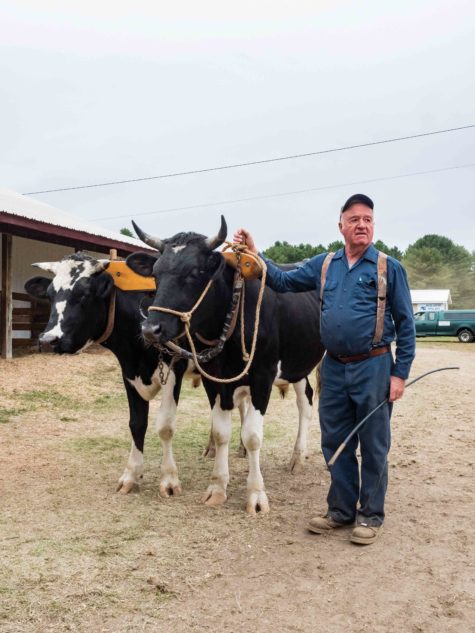 Greg Larrabee and his Holstein team on the way to the pulling competitions at the Cumberland Fair. Longtime fair president Mike Timmons says the nearly 150-year-old fair is “about what was, what is, and what needs to be happening in agriculture.” 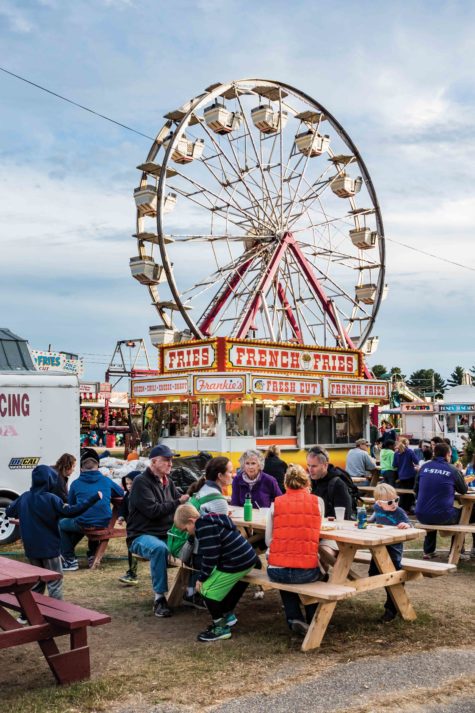