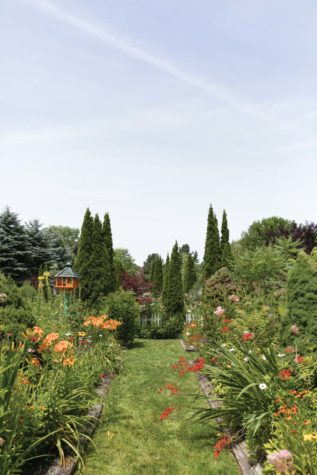 Raised garden beds at the home of Eddie Woodin feature perennials such as daylilies and crocosmias. 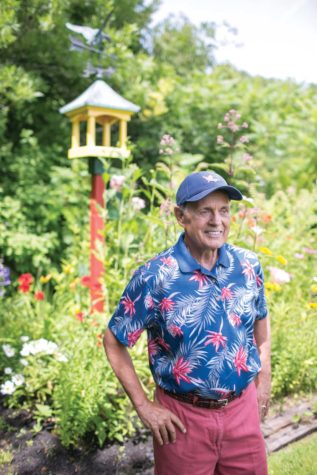 Conservationist Eddie Woodin was honored by Historic New England in 2017 for his extensive collection of bird art. 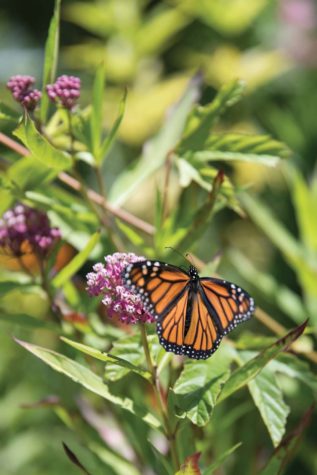 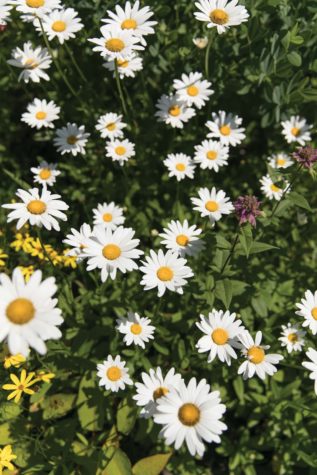 Shasta daisies bring a touch of white to the garden’s vibrant landscape. 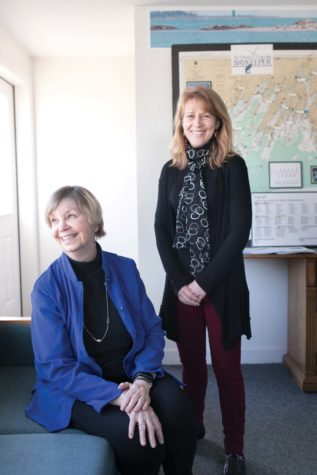 The rows of raised beds are alive with activity. Bees dip and swerve around a scattered village of birdhouses. A painted lady briefly settles on a coneflower before fluttering over to a stalk of purple-blossomed joe-pye weed. “The earth has a soul,” says gardener and businessman Eddie Woodin, stopping to listen to the plaintive cry of a catbird. “Everything does.” A longtime birder and environmentalist, Woodin has spent two decades creating outdoor space that benefits all who use it—from humans to hummingbirds—in the healthiest way possible. His approach is championed by organizations like Friends of Casco Bay and others who seek to protect Maine’s woods, wildlife, and waters for generations to come.

Growing up in Concord, Massachusetts, during the 1950s, Woodin spent a lot of time outdoors and paid close attention to the local wildlife. This was before the widespread availability of polio vaccines, and outbreaks of the disease were causing 15,000 cases of paralysis each year in the United States. Because at the time it was thought that mosquitoes might be carriers of the poliovirus, towns were aggressive in their use of pesticides. “We would hear the drone of the tank truck in the summer,” says Woodin. “Seated on top was a man with a spray hose and DDT. You ran for cover. You closed the windows. There was no warning. And it was incredible, the spray that went down the middle of the road, killing the Baltimore orioles. It eventually killed the screech owls, too.” Woodin’s observations correlated with what would become a widespread understanding of the impact of the insecticide dichlorodiphenyltrichloroethane (DDT) on the environment, as documented by Rachel Carson in her groundbreaking 1962 book Silent Spring.

Woodin came to Maine to attend Colby College. The school recruited him to play football and baseball, awarding him a scholarship—a boon for his blue-collar family. During the summers between his college years, Woodin reconnected with the outdoors working at his own landscaping business. After graduation, he moved to California for a short time, then returned to the Pine Tree State in 1970. In marketing and sales all of his life, he went on to found Woodin and Company Store Fixtures, now a 25-year-old company that designs and manufactures interior retail spaces for stores like Barnes and Noble.

When Woodin bought his current home on Grondin Pond in Scarborough 20 years ago, his property had no grass on it. The development in which it is located was built near a former gravel pit that had been filled with water, yielding a 28-acre pond. Woodin viewed his vegetation-free lot as an opportunity. His goal was to fill the two acres with plants and trees and, in the process, create a habitat for birds and wildlife. He did this without the use of pesticides, herbicides, or other synthetic chemicals, using only dehydrated compost as fertilizer. “I started planting, and it got bigger and bigger,” says Woodin. “My message is abstinence. You don’t need the chemicals.”

Over time he noted an increasing absence of bugs—and bats—on his property. “We had eight brown bats that had been historically in the yard, and all of a sudden I noticed there are no brown bats,” says Woodin, who is also a member of the Maine Audubon Society. “Probably two weeks later, a nesting box of adult tree swallows abandoned the nest and the left the young behind because there were no insects.”

Woodin was concerned about this change in the ecosystem. He suspected that pesticides might be to blame, so he continued to educate himself on the subject. In 2009 he began gathering a group of like-minded individuals, many of whom he met through the Scarborough Land Trust, and formed the group Citizens for a Green Scarborough. They collected over 700 pages of documents describing the negative impacts of chemical pesticides on the environment and human health. One of their primary concerns was town fields where children play sports on grass that has been chemically treated. “Children are impacted when they slide into first base or play soccer. A lot of these chemicals are then tracked into the home,” says Woodin. “We want to keep our kids healthy. Better to have weeds than pesticides.”

Woodin’s group faced resistance from chemical companies as well as some local landscapers and pesticide professionals. These groups argued that organic pesticides are not only expensive but, in treating the soil rather than the weeds, could be equally toxic. “We had a lot of opposition. It was quite a battle,” says Woodin. By 2011 Citizens for a Green Scarborough had convinced the town to enact a progressive pest-management policy, which restricts the use of synthetic weed killers and other chemicals on municipal properties. “It’s a great Margaret Mead example of how a committee of passionate, committed people can change a community,” says Woodin, alluding to a quote by the well-known anthropologist. “And we did.”

Woodin and Citizens for a Green Scarborough used the media coverage they received to spread their message to individuals in their community and elsewhere. “My concept was, if we could convince the town to go organic on their municipal property, including the athletic fields, they were the tip of the iceberg,” says Woodin. “We’ve converted hundreds of homeowners from there.” This has continued to be a topic of interest across the state: according to the Maine Department of Agriculture, Conservation, and Forestry, 29 towns, from Allagash to Wells, have adopted local ordinances to control pesticide use. In January 2018 the city of Portland passed one of the most far-reaching ordinances to date, with the help of the environmental group Friends of Casco Bay.

Friends of Casco Bay has had a stake in healthy Maine waters since the organization’s formation in 1989. The organization came into being after a report entitled “Troubled Waters: Report on the Environmental Health of Casco Bay,” by biologist Paul Hauge, the Conservation Law Foundation, and the Island Institute, claimed that the region had one of the most polluted estuaries in the nation. Since that time, Friends of Casco Bay staff and volunteers have been monitoring water quality at multiple sites. Between 2001 and 2009 they collected rainwater flowing into Casco Bay and analyzed the samples for a suite of pesticides. Lab results identified nine different pesticides in 14 locations.

“Casco Bay receives waters from throughout inland Maine: any wetlands that drain into rivers will eventually make their way to Casco Bay,” says Mary Cerullo. A self-described “science translator,” Cerullo is the associate director of Friends of Casco Bay. “Public and private property owners have the capacity to impact living matter, whether plant or animal, in the bay waters.” Cerullo says that the bay has experienced significant problems with algal bloom due to the nitrogen in fertilizers. Nitrogen, as it does on land, triggers plant growth in the ocean. When these blooms die, decomposition removes oxygen that marine life needs and adds carbon dioxide, which can make the seawater more acidic. Clams and mussels have more difficulty building and maintaining their shells in these conditions.

“Because of the impact of nitrogen, fertilizers, and pesticides, we realized we had to get people involved and thinking about how they use their properties,” says Cerullo. “Even if they live far up the watershed, it still comes down those rivers.” Through its BayScaping initiative, Friends of Casco Bay suggests that people minimize the use of chemicals in lawn care. “Things wash off of lawns more than gardens or under trees,” says Cerullo. “Our position has been, ‘Let’s keep it out of the water.’” Friends of Casco Bay suggests practices like composting, using perennial ryegrass in thinning areas, and mulching with grass clippings.

Friends of Casco Bay also works with landscapers, arborists, and others who have an interest in the lawn and garden industry. “We have a really collaborative approach, which sometimes separates us from other organizations,” says Cerullo. “We want to put everybody into the conversation. Whatever is created as a result will be a lot more responsible.”

“The public has become much more aware that, even though we live in a state where we think we’re in a totally clean environment, these are real threats, and they want to do something about it,” says Ivy Frignoca, the Casco Baykeeper for Friends of Casco Bay. Friends of Casco Bay works with others who share an interest in Maine’s ecosystem, addressing watershed-wide issues in partnerships or coalitions with other organizations. The Maine Department of Agriculture, Conservation, and Forestry has a counterpart to the 20-year-old BayScaping program called YardScaping, which offers ideas about how to manage pests, design landscapes, and choose plants that attract pollinators like bees and birds. In partnership with the City of Portland, this program created a two-and-a-half-acre demonstration landscape on Back Cove, which “showcases appropriate plantings in urban to rural settings in a beautiful, homeowner-doable way, plus serves as a model for municipalities across the state,” according to the program’s website. “It’s pretty exciting to see these efforts going on in the communities around Casco Bay,” says Frignoca.

Woodin says that one the most important things he did for his own lawn and garden was to change his expectations. He is willing to put up with a few of what many of us consider to be weeds in order to create a healthier ecosystem. “Dandelions, I embraced. I enjoy them. It’s the first natural flower for the bees. I love clover,” he says. “And in the end, this natural approach has created a great property teeming with an abundance of life.” 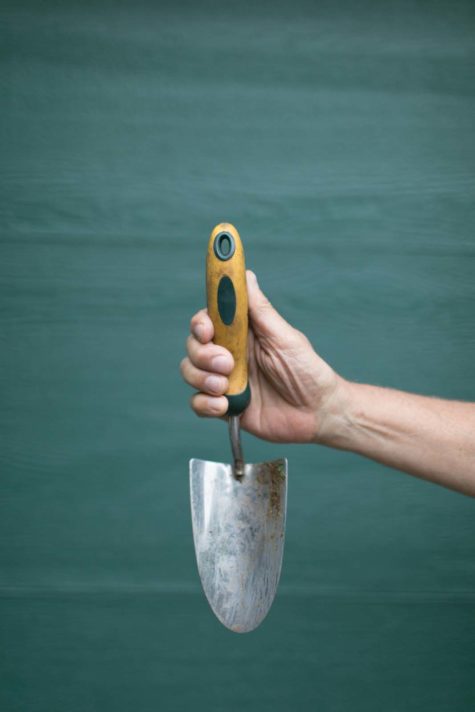 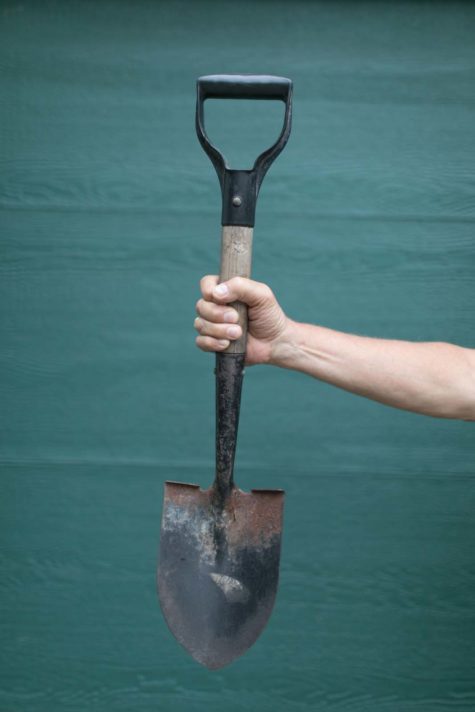 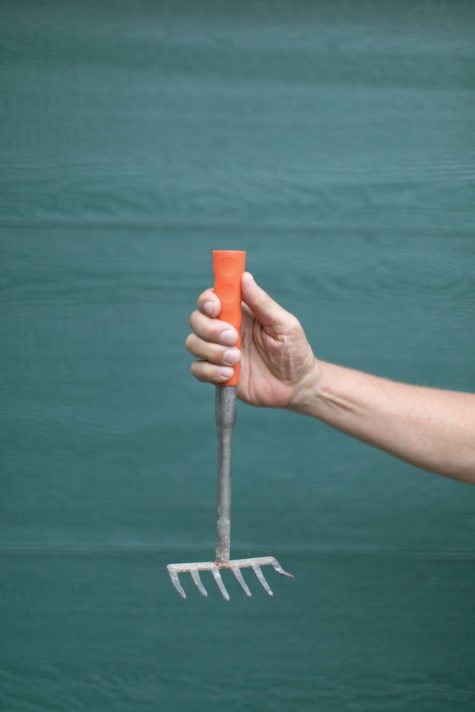